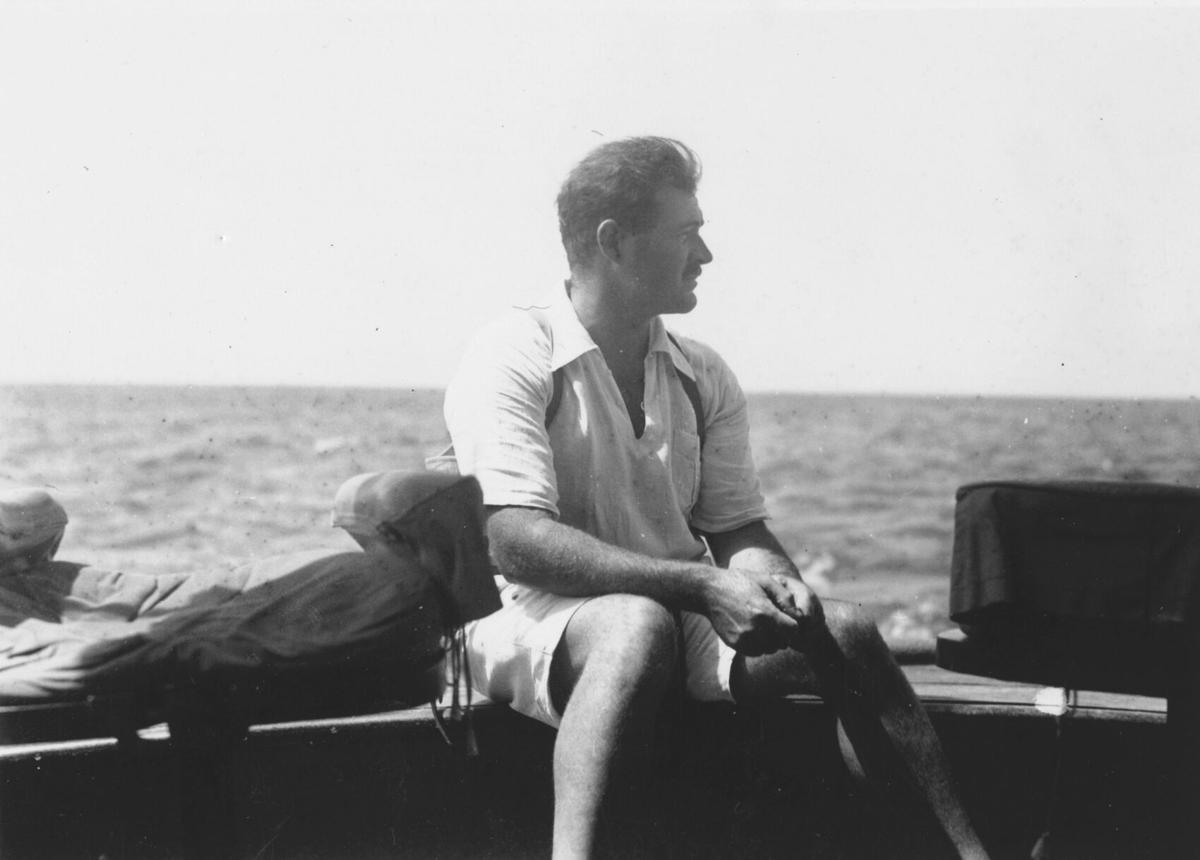 Ernest Hemingway is pictured in the fishing boat Anita in this photo circa 1929. A year before this photo was taken, Hemingay was writing his second novel “A Farewell to Arms” in Sheridan County 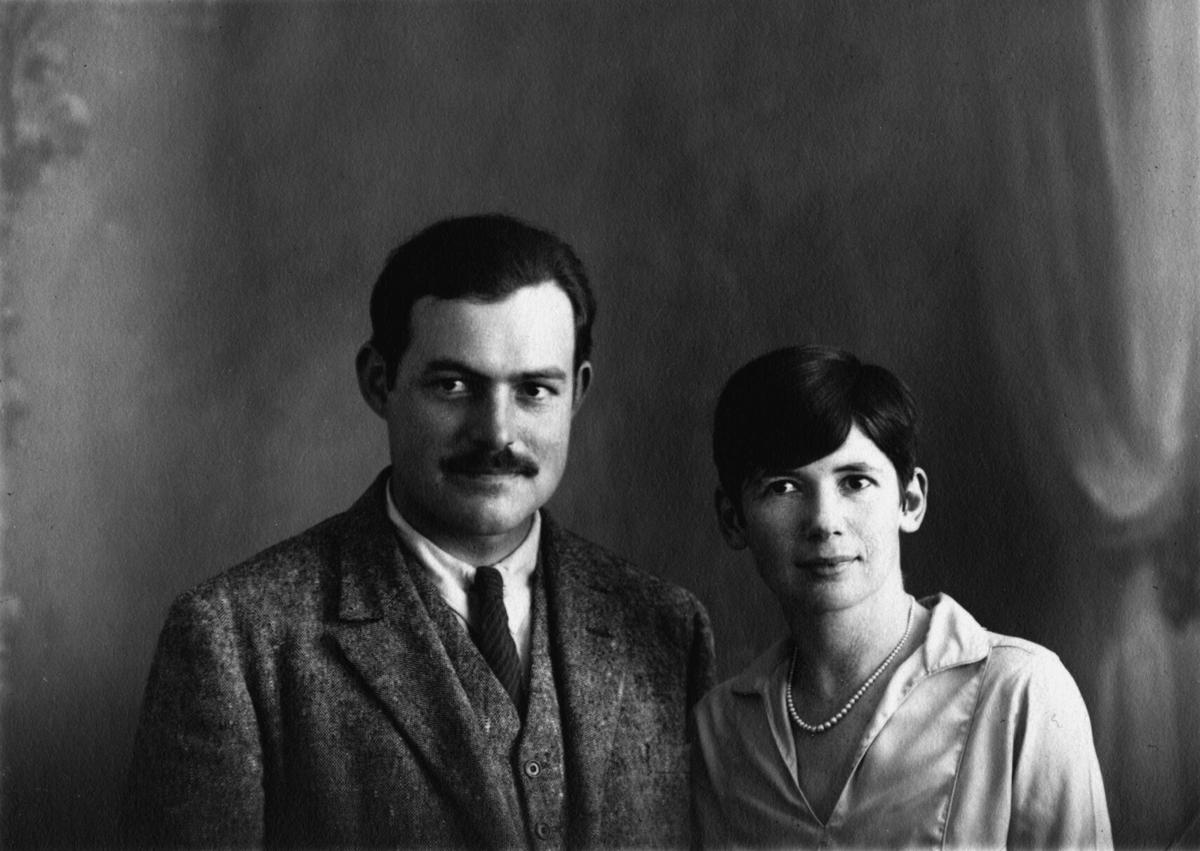 Ernest Hemingway is pictured with his second wife Pauline Pfeiffer. Hemingway was married to Pfeiffer in 1928, when he lived and wrote for a time in Sheridan County. 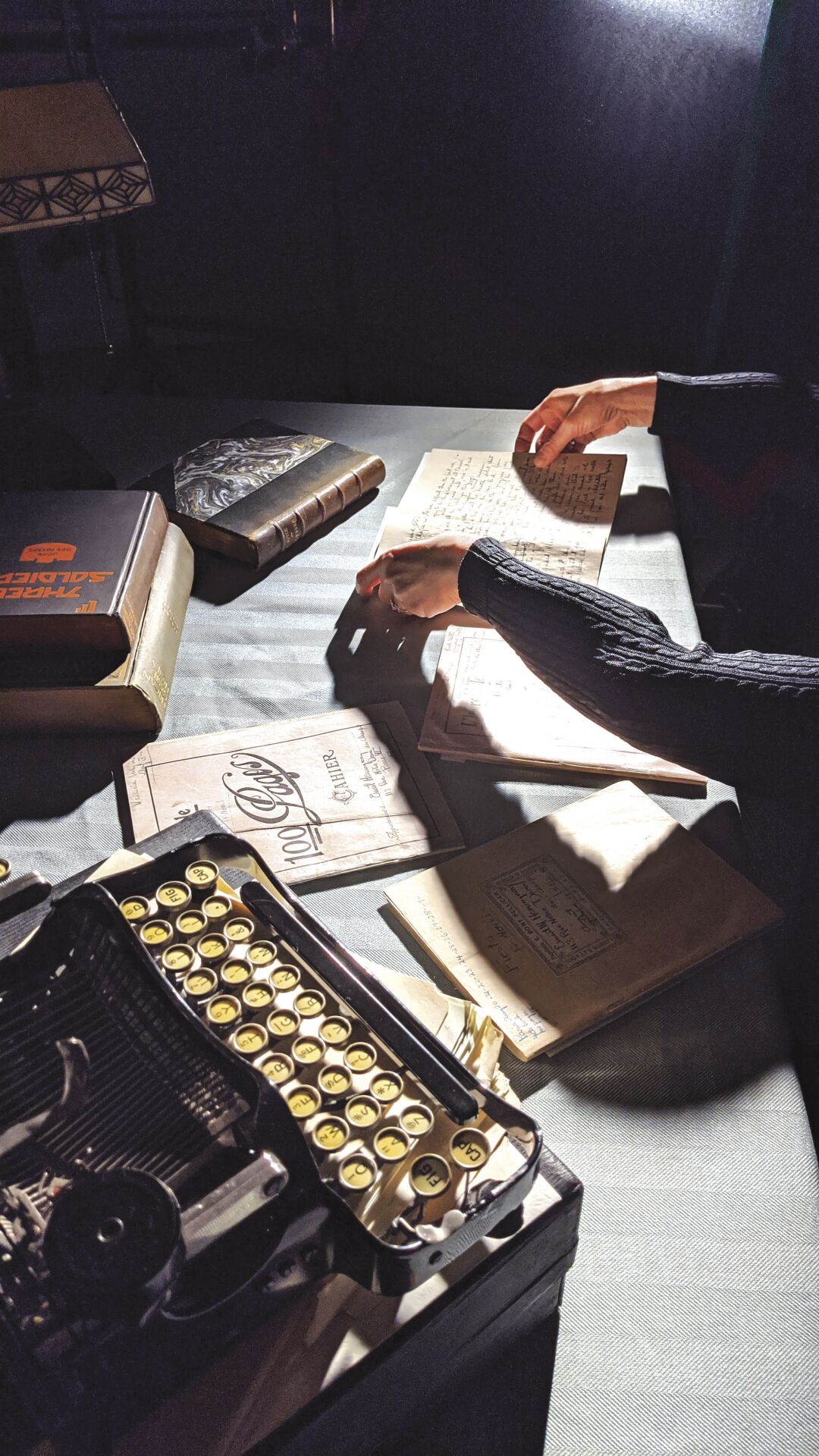 Crew members of Ken Burns’ and Lynn Novick’s film “Hemingway” organize artifacts from the author’s life at the John F. Kennedy library in Boston prior to filming on Friday, February 26, 2020. The documentary, currently streaming for free on PBS.org, brings to life a legendary writer with many ties to the Sheridan area.

Ernest Hemingway is pictured in the fishing boat Anita in this photo circa 1929. A year before this photo was taken, Hemingay was writing his second novel “A Farewell to Arms” in Sheridan County

Ernest Hemingway is pictured with his second wife Pauline Pfeiffer. Hemingway was married to Pfeiffer in 1928, when he lived and wrote for a time in Sheridan County.

Crew members of Ken Burns’ and Lynn Novick’s film “Hemingway” organize artifacts from the author’s life at the John F. Kennedy library in Boston prior to filming on Friday, February 26, 2020. The documentary, currently streaming for free on PBS.org, brings to life a legendary writer with many ties to the Sheridan area.

SHERIDAN —  A new documentary aired on public television last month has brought one of Sheridan’s most famous visitors  — Ernest Hemingway — back into the spotlight 60 years after his death.

"Hemingway," a new six-hour documentary by Ken Burns and Lynn Novick, which premiered on PBS last month, uses the author’s writings to paint an intimate portrait of his life and to engage with his limitations and biases as a man of his time.

The documentary arrives at the perfect time, according to Sheridan County Travel and Tourism’s Executive Director Shawn Parker. Parker and his team are preparing for the arrival of the 19th International Hemingway Conference in Sheridan in 2022, when scholars from around the world will descend on the community where the author finished his second novel “Farewell to Arms” at age 29.

With the conference a year away, now is the perfect time to get reacquainted with one of the literature world’s “rock stars,” Parker said.

“He has a reputation of being maybe the greatest American author of all time, but I think we forget that he was as big as rock stars are now,” Parker said. “More people would buy a copy of his books than would see movies. I think part of his attraction is his writing, but part of it is the way he lived his life. He was not a typical author in many ways. He was known for partying in Paris, attending bullfights in Spain and big game fishing in Cuba. He was a quintessential rockstar of his time, a man other men really aspired to be in many ways.”

Sarah Botstein has been producing documentaries with Florentine Films since 1997 and has produced for Burns and Novick since 2001’s “Jazz.” While “Hemingway” was a deeply personal project for both Burns and Novick — Burns told Slate he has been thinking about the project for more than four decades — Botstein came into it with relatively fresh eyes, which gave her an opportunity to form her own opinions about the iconic author.

“Unlike Ken and Lynn, I did not read a lot of Hemingway as a student,” Botstein said. “I think I read ‘Old Man and the Sea’ and a couple of short stories, but he was fairly absent from my classroom. So I had very few impressions of him when we started making this film, which was maybe good. It was truly a process of learning.”

One of the first things that became clear, after dozens of interviews with notable writers, is that Hemingway still captures the heart of the literary world, Botstein said.

“If you talk to any writer from anywhere in the world, they will likely tell you what (American short story writer) Tobias Wolff told us,” Botstein said. “Hemingway changed the landscape of how people write and how people talk in literature. His influence is still felt today.”

As Hemingway influenced the English language, he was influenced by the places he called home — France, Spain, Cuba and even Sheridan.

“He loved to write and think about things he was observing,” Botstein said. “He was constantly putting himself in foreign places to write about memory, but also about the then and now.”

When he came to Sheridan in 1929, Hemingway was focused primarily on his past. After the success of his first novel “The Sun Also Rises,” Hemingway felt a lot of pressure to surpass it. He settled on an autobiographical tale based on his own experiences in the Italian Campaign during the first World War.

“In ‘Farewell to Arms,’ he was writing about some of the most difficult, long-lasting experiences of his time — not just for him but for an entire generation,” Botstein said. “He worked very hard to write a very beautiful book. It was difficult for him to go into those memories every day, but I think having the wilderness around him really helped him do that.”

Hemingway came to Sheridan July 30, 1928, and wrote at various locations in Sheridan County, starting at the Folly Ranch before moving to the Sheridan Inn. He finished his novel at Spear-O-Wigwam, where his cabin stands to this day.

Hemingway stayed in Sheridan until Aug. 26. Hemingway’s brief stay in Sheridan continued to impact his writing even after he left the area. His 1933 short story “Wine in Wyoming” is a fictionalized story based on his friends the Moncinis, a French immigrant family he met while in Sheridan County.

In many ways, Hemingway’s personal life was deeply tumultuous, Botstein said, but his relationship with the natural world was never tarnished. Wild and beautiful places like Sheridan served as his inspiration to the end.

“He betrayed a lot of friends and he was not nice to women, but he never betrayed the natural world,” Botstein said. “He was never disloyal to nature. He was constantly putting himself in the natural world. He loved the western landscape. He loved that big sky country, the vastness of the world.”

That love is mutual, Parker said, and even after all these years, Sheridan County residents still have a lot of affection for one of its most famous visitors.

“When you tell stories about people who have a history here, there is a groundswell of emotion and memories,” Parker said. “This is a very tight knit community, and Hemingway is an important part of it.”

"Hemingway” can be streamed for free in its entirety at pbs.org or on the PBS app.