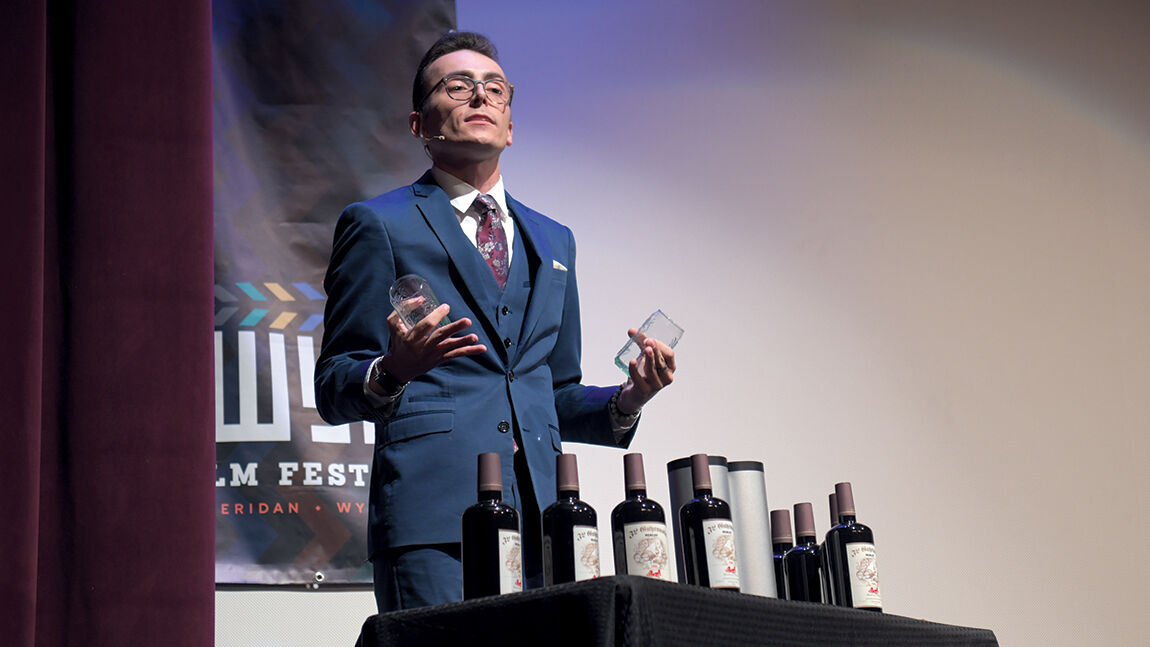 Emily Simanskis | The Sheridan Press Magician John Rotellini performs his second trick at the WYO Performing Arts and Education Center Thursday, Oct. 1, 2020. Rotellini grew up in Sheridan and started his career at the WYO 13 years ago. 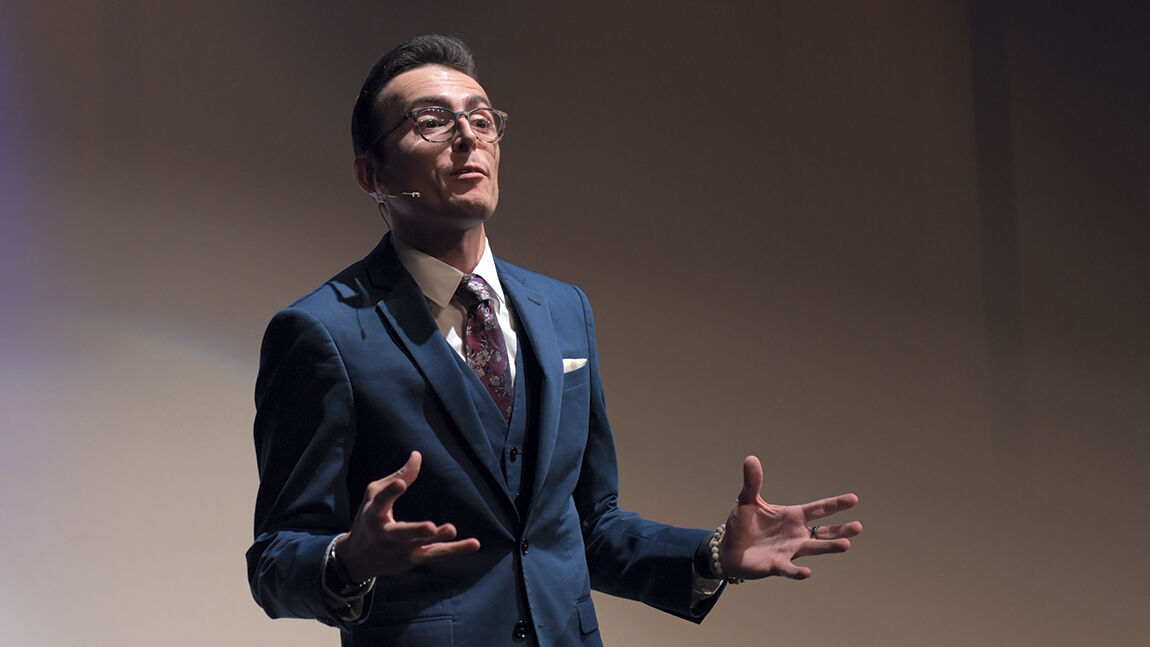 Emily Simanskis | The Sheridan Press Magician John Rotellini introduces himself prior to his 10-minute performance at the WYO Performing Arts and Education Center Thursday, Oct. 1, 2020. Rotellini later elicited gasps from the audience with his card trick. 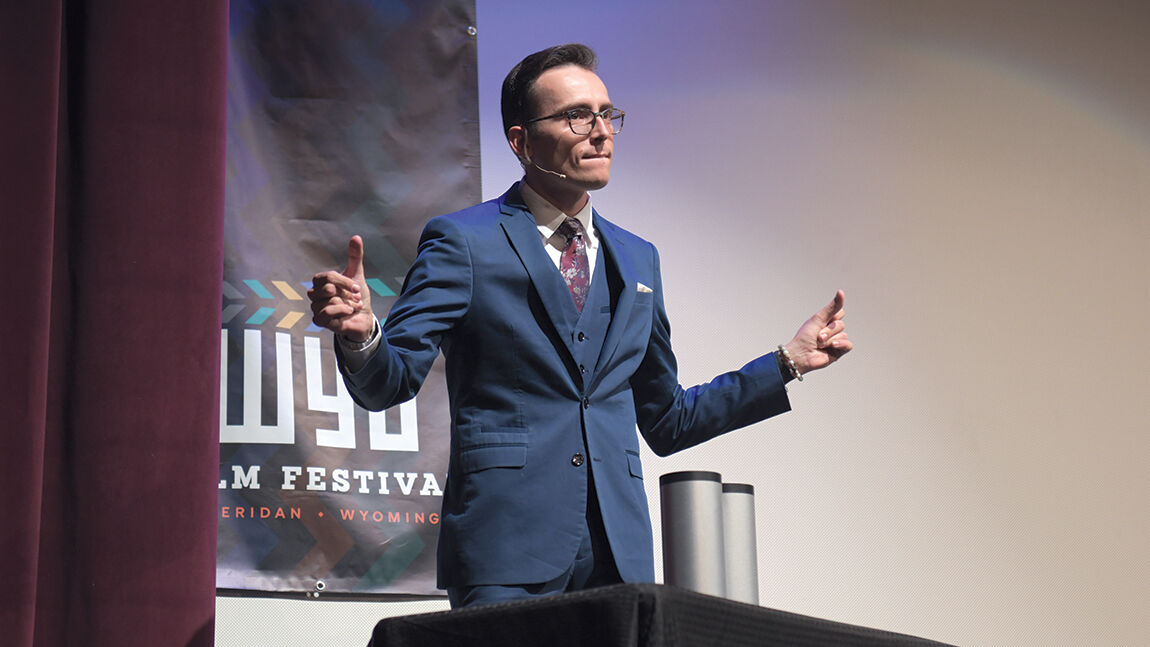 Emily Simanskis | The Sheridan Press Magician John Rotellini performs his second trick at the WYO Performing Arts and Education Center Thursday, Oct. 1, 2020. Rotellini grew up in Sheridan and started his career at the WYO 13 years ago.

Emily Simanskis | The Sheridan Press Magician John Rotellini introduces himself prior to his 10-minute performance at the WYO Performing Arts and Education Center Thursday, Oct. 1, 2020. Rotellini later elicited gasps from the audience with his card trick.

SHERIDAN — John Rotellini stepped onto center stage at the WYO Performing Arts and Education Center Thursday evening in a navy three-piece suit, introduced himself and explained his performance would be the first in-person show he’s put on since COVID-19 shut down Las Vegas, where he resides.

Rotellini stepped 5 feet forward, out of the spotlight and closer to the edge of the stage.

The Sheridan-native proceeded to begin his first magic trick by throwing two decks of cards bound together by rubber bands into the audience, asking those who caught them to peek at a card, memorize it then turn and toss the deck to someone behind them.

Once the two decks made their way four people deep, Rotellini asked for audience members to throw the decks back on stage before he attempted to guess their cards. He cracked a joke about the poor throws, and the socially distanced crowd settled into their seats and the experience.

Left arm raised in the air, Rotellini’s left pointer, middle and thumb fingers opened and closed on air, almost in a pinching motion, as the magician asked the eight participating audience members to visualize their cards.

Rotellini squinted, looked through everyone then called out six cards and asked the participants to sit down if he had successfully guessed the card they had peeked at.

“No way,” an audience member exclaimed when the participant nearest to her sat down.

The “no way”s, astonished chuckles and slightly gaping mouths fuel Rotellini’s passion for magic. The reactions — the visceral experience that comes with a magic show like the 10-minute performance Thursday — spurred him into becoming a magician.

“If you do magic for a kid, they have a cool reaction and it’s this really pure, beautiful, raw, innocent joy,” Rotellini said. “It’s what’s neat about magic. … I can take someone that’s middle-aged, someone that’s elderly and if I do a magic trick properly, that same little kid lights up.”

Born and raised in Sheridan, Rotellini remembers riding bikes in the summer with his best friend and swimming at Kendrick Pool before changing into dry clothes at his friend’s house to then go watch magician Jay Owenhouse perform in town. Though exposed to magic early, Rotellini didn’t discover his passion for the craft until his junior year of high school after attending Wyoming Boys’ State. After seeing his peers float napkins and perform other tricks, Rotellini went to Sheridan’s library and checked out books from the 1950s about vaudeville-era magic.

Performing for family and friends and eliciting reactions from his audience even as a beginner became addicting to Rotellini, and he honed his craft enough to almost sell out two days at the WYO about 13 years ago.

Not only did the “big stage magic” show, involving a disappearing and reappearing motorcycle, jumpstart Rotellini’s career, it solidified the Sheridan community’s support for his endeavors. Rotellini’s father, also John, remembers Rotellini’s tenacity and his hometown’s encouragement during Rotellini’s debut.

“When he gets something in his mind, that’s what he does,” Rotellini’s dad said. “... He just has had a great support network from Sheridan and beyond.”

While attending Sheridan College then the University of Wyoming, Rotellini continued to practice magic and began performing at colleges, birthday parties and corporate events.

His communication, journalism, marketing, psychology and sociology studies led him to juggle his marketing company and a more regular 9 a.m. to 5 p.m. job with his passion for magic even after moving to Las Vegas. The location change served as “College 2.0” for Rotellini, as he not only continued to learn and practice various genres of magic, but he came to understand the business side of being a magician.

As Rotellini’s experience and repertoire grew, so did the demand for his appearances and performances at casinos and on cruise lines, forcing him to make a professional decision and transition into a self-designed 9-5 running an entertainment and production company.

COVID-19 affected, and continues to affect, Rotellini’s work, but his reputation and innovation allowed him to pivot and adjust his work — holding virtual shows and filming performances have become necessary for the magician.

“It’s always home,” Rotellini said. “Parts change … but it’s always been one of my happy places. And a lot of it is the people. The people here are incredibly kind, welcoming.”

Since those summers riding bikes to magic shows in Sheridan, Rotellini described his familiarity with magic as riding Disney World’s Space Mountain when the lights come on — the ignorant bliss and sense of wonder that comes with magic tricks has largely been lost.

But there’s a heightened appreciation for the “no way”s and gasps Rotellini evokes. Sheridan helped Rotellini learn to manage his performer’s identity and Johnny Rotellini from Sheridan, who debuted at the WYO.

“Neither [identity] is bad,” Rotellini said. “Both are important because I need to just be ‘Johnny Rotellini from Sheridan, Wyoming’ because that’s who I am, but the performer needs to be what he is for the show, for the interactions with the audience.

“The real trick has been learning how to be both without compromising either.”

After Thursday’s performance followed by a screening of a Sheridan-based short film, Rotellini mingled with audience members back where it all began.

“That’s why I come back to Sheridan,” Rotellini said. “If I would go and tell my little-kid-self about this, getting to travel the world and perform in arenas with thousands of people … that stuff happens. And there are still times I go, ‘What the hell am I doing here? I’m just a kid from Sheridan, Wyoming.’”