Sign Up
Log In
Purchase a Subscription
You are the owner of this article.
Edit Article Add New Article
You have permission to edit this article.
Edit
News
Sports
A&E
Business
Opinion
Politics
Obituaries
Multimedia
Announcements
e-Edition
Classifieds
Business Directory
Share This
1 of 5 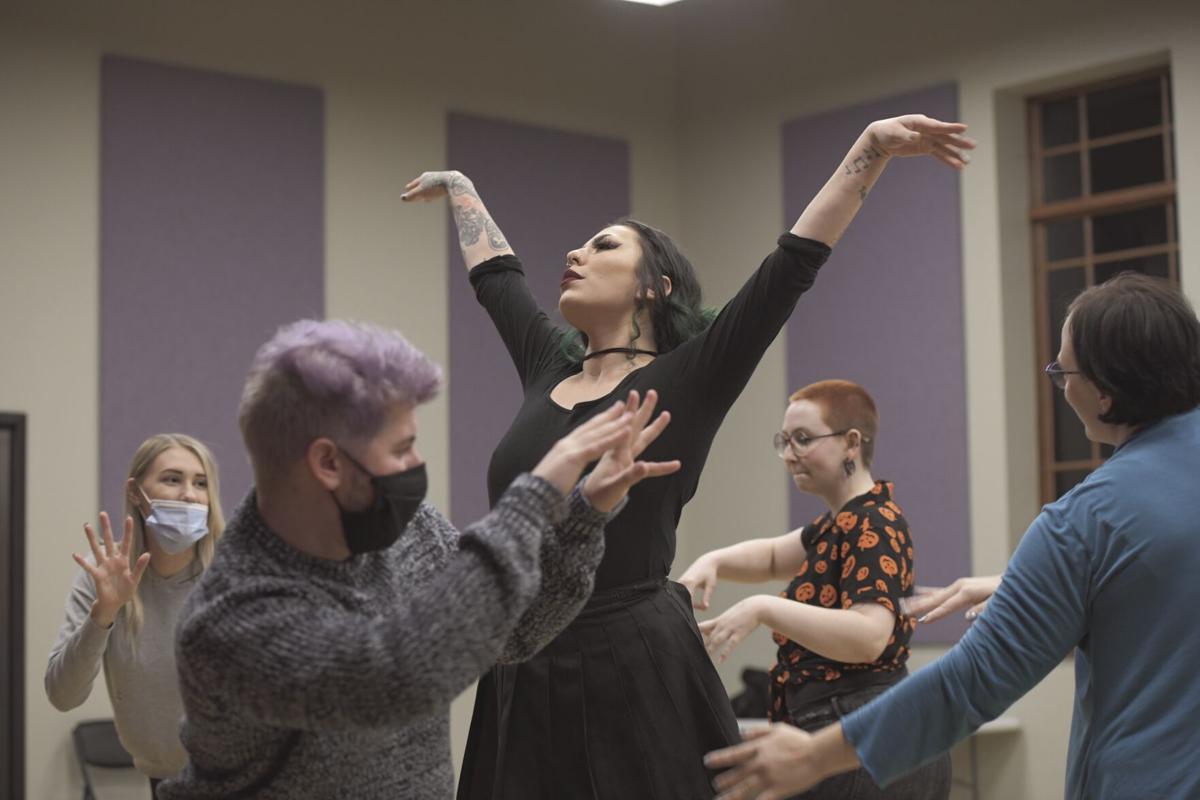 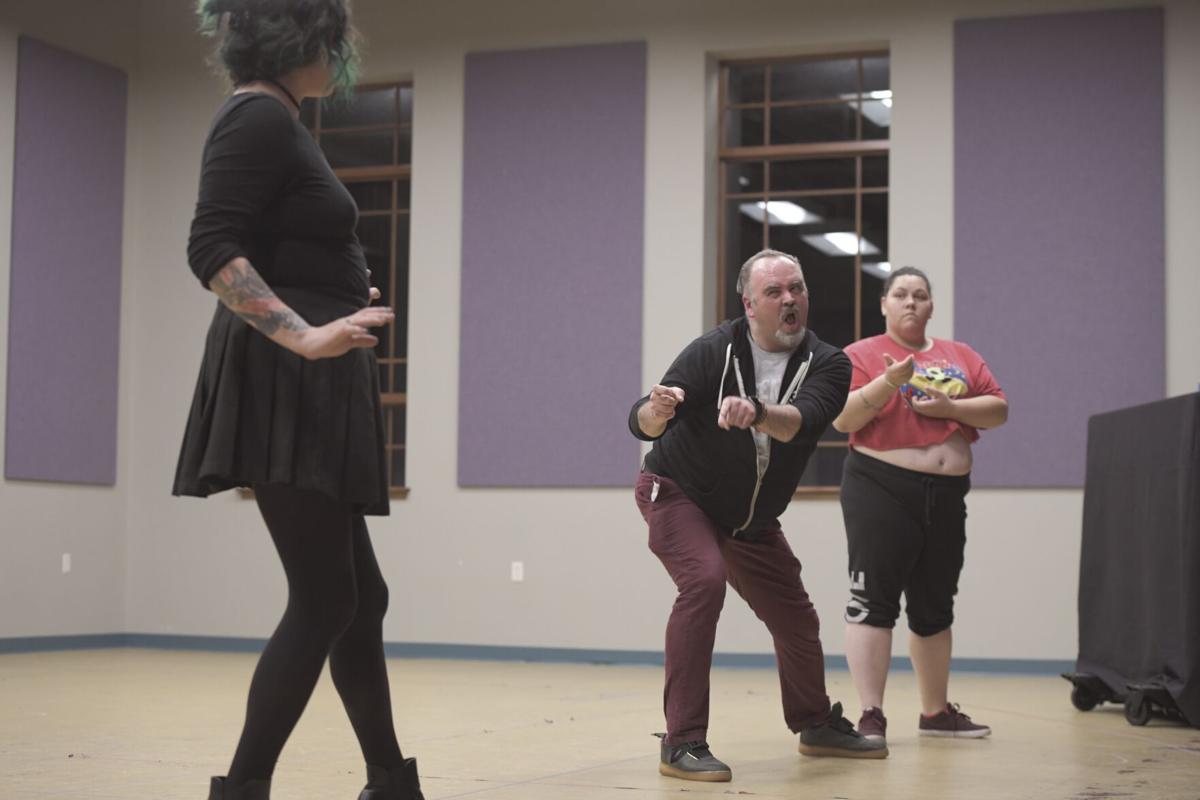 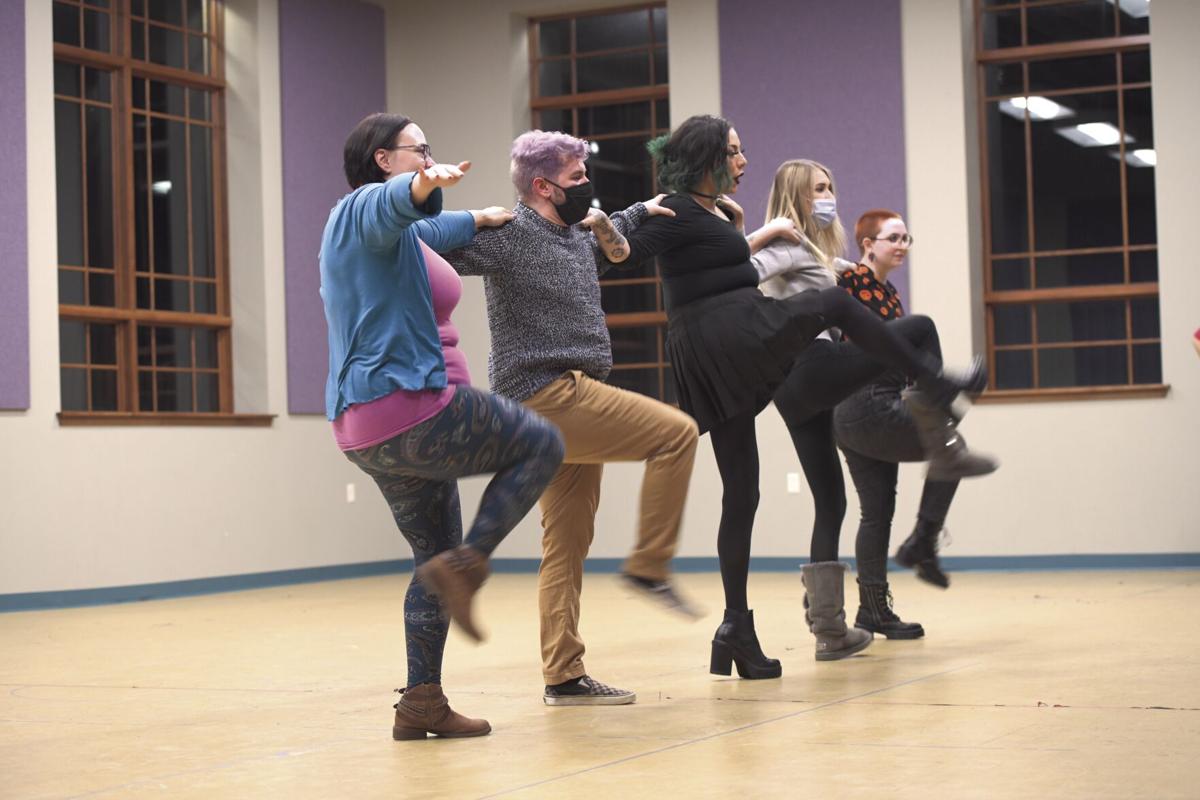 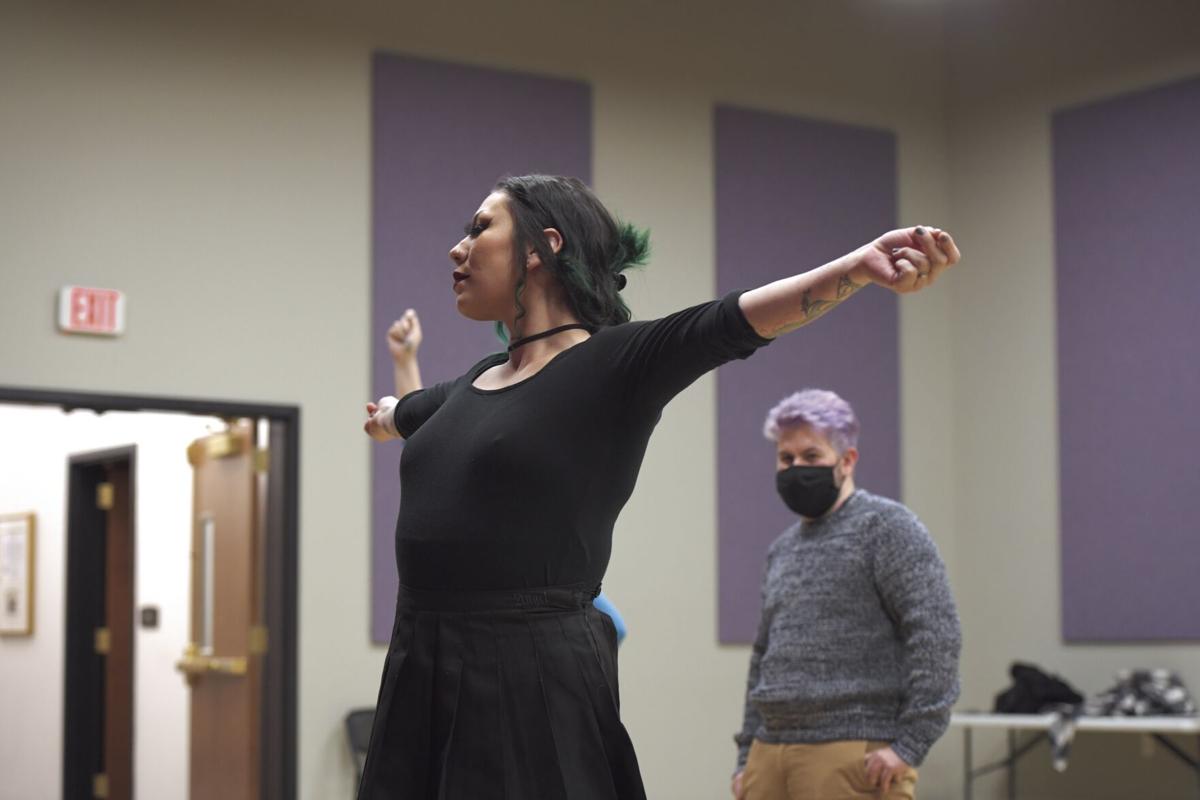 Tahseana Smiley, who plays Dr. Frank-N-Furter in this years production of "The Rocky Horror Picture Show," rehearses one of the character's iconic entrances. 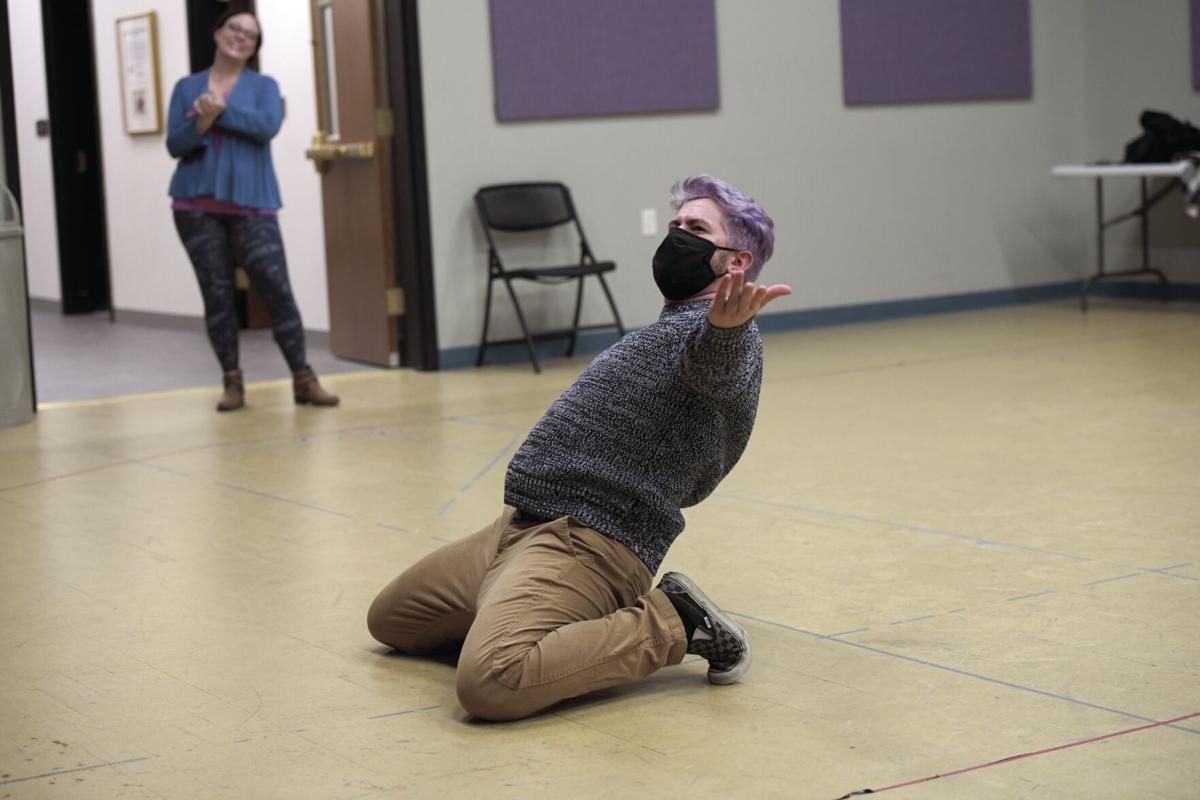 Tahseana Smiley, who plays Dr. Frank-N-Furter in this years production of "The Rocky Horror Picture Show," rehearses one of the character's iconic entrances.

SHERIDAN — Actors filed into the Tandem Rehearsal Hall Wednesday night, stepping over arcing lines of blue and red tape on the floor. One thick line of tape blocked off most of the stage, and actors took their places in front of it.

When the company makes the switch to the WYO Performing Arts and Education Center’s main stage — just two floors down from the rehearsal space — that line will be an enormous screen, stretching down from the ceiling. After all, Trident Theatre Company and production director Aaron Odom explained, the production requires multimedia collaboration between a live cast and a 1975 film.

As Odom pressed a button on his laptop, music filled the rehearsal space, and the actors started swinging hips, waving arms and bouncing to the beat. Their task: to lip-sync and dance their way through “The Rocky Horror Picture Show.” The cult classic will return to Sheridan’s WYO Performing Arts and Education Center at 9 p.m. Oct. 30, 2021.

“The Rocky Horror Picture Show” has maintained an annual presence in Sheridan for eight years, when Sheridan College students staged the first local production of the over-sexed, campy classic in 2013.

The show is also an international staple of LGBTQ+ cinema and theater. After its release in 1975, midnight showings of the film began in New York City in 1976, in the wake of the Stonewall riots and in the middle of a movement for LGBTQ+ rights. The show’s content also openly embraces pansexuality and gender fluidity. Odom described the film as a generational “staple of [LGBTQ+ people] discovering who they were.”

Kenneth Allen, president of Sheridan Supports LGBTQ+, a local organization dedicated to supporting and advocating for LGBTQ+ communities and allies in Northern Wyoming, said “The Rocky Horror Picture Show” is essential in fostering LGBTQ+ friendly spaces in communities around the world.

“This film brings people of all different backgrounds, sexual orientations and gender identities out and about for a night of fun…” Allen said, “without the constant worry of harassment from ignorant onlookers.”

Because of COVID-19 safety precautions, however, last year’s production of “Rocky Horror” was not the extravagant performance fans are accustomed to, said WYO Executive Director Erin Butler. In 2020, COVID-19 safety measures required the theater allow for physical distancing by only filling a certain number of seats, a decrease in capacity that required two showings of the film on one day. Butler called it “a true double-feature.”

Last year’s production of “The Rocky Horror Picture Show” at the WYO was also missing the showmanship — including cast members and props — fans expect. For instance, the production usually requires movie-goers provide props, ranging from bubbles to noisemakers, rubber gloves to toilet paper. These props, which are used or even thrown at the stage at the appropriate moment in the production according to “Rocky Horror” lore, were not allowed in last year’s production due to COVID concerns.

Perhaps most noticeably, 2020’s production was missing its phantom cast, the crew of actors who portray scenes from the film on stage for onlookers. COVID-19 prohibited the phantom cast from rehearsing or performing together, meaning that the 2020 showing was more of a movie than a performance.

Luckily for Odom and the cast of this year’s production of “Rocky Horror,” restrictions have sufficiently loosened to allow them to rehearse and perform together. Although the WYO is encouraging theater-goers to wear masks during this year’s production, Butler says this year’s performance will be truer to the show’s more traditional stagings.

The production’s actors, who spent Wednesday night practicing kick lines, strip teases and twists, are thrilled to be able to display their dance moves and lip-synching abilities at the performance later this month. Allison Sweeney, who will play Rocky in this year’s production, said she was “super excited” to return to theater and hopes that the audience “laughs their butts off” during the show. Kael Parker, a Sheridan local portraying Brad Majors in the production, is similarly excited, albeit a little nervous.

The performance, Parker said, will certainly be “a night to remember.”

As to how the hypersexualized show will go over — again — in Sheridan, Odom is confident the show’s fanbase and his actors’ performances will create a spirited and entertaining performance Oct. 30. Moreover, he said, the show’s “opportunity to explore a dirtier side of [oneself], a side which frankly we all have” will help actors and audience members alike better understand themselves, their gender identities and their sexual identities.

“How is Sheridan going to take it?” Odom said Wednesday. “However they will.”