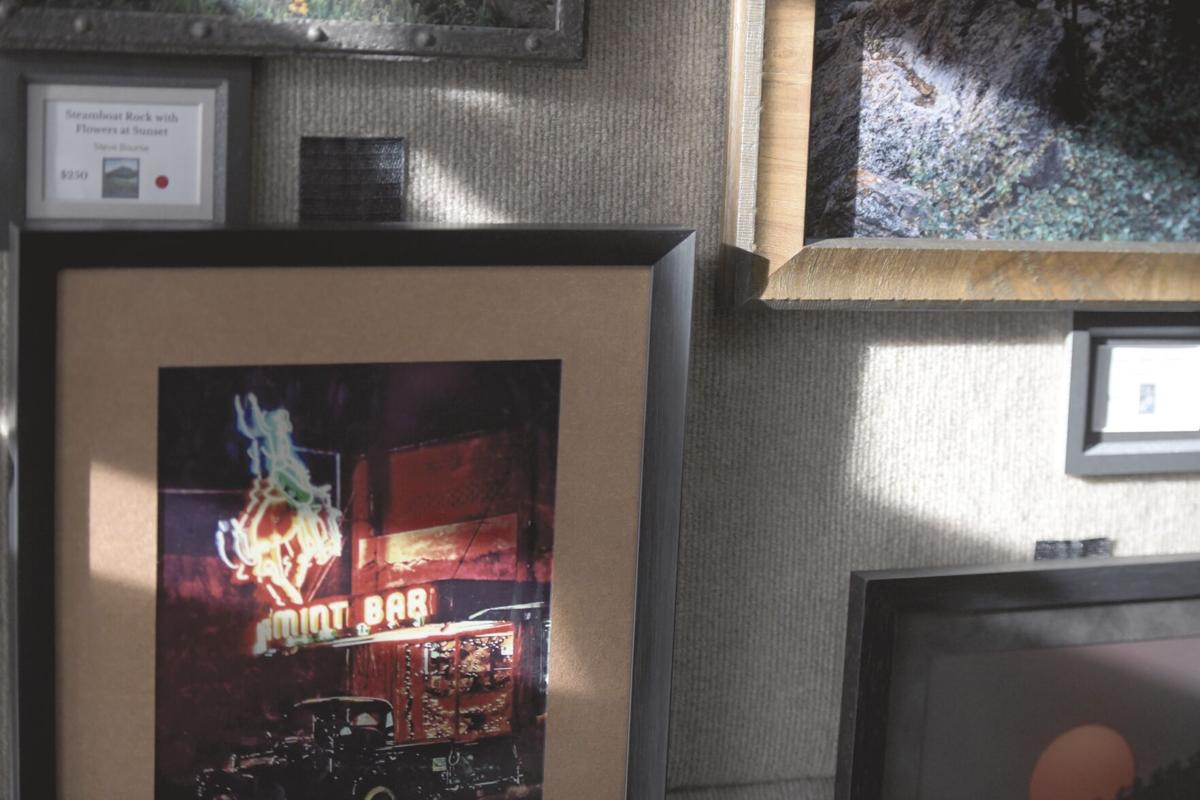 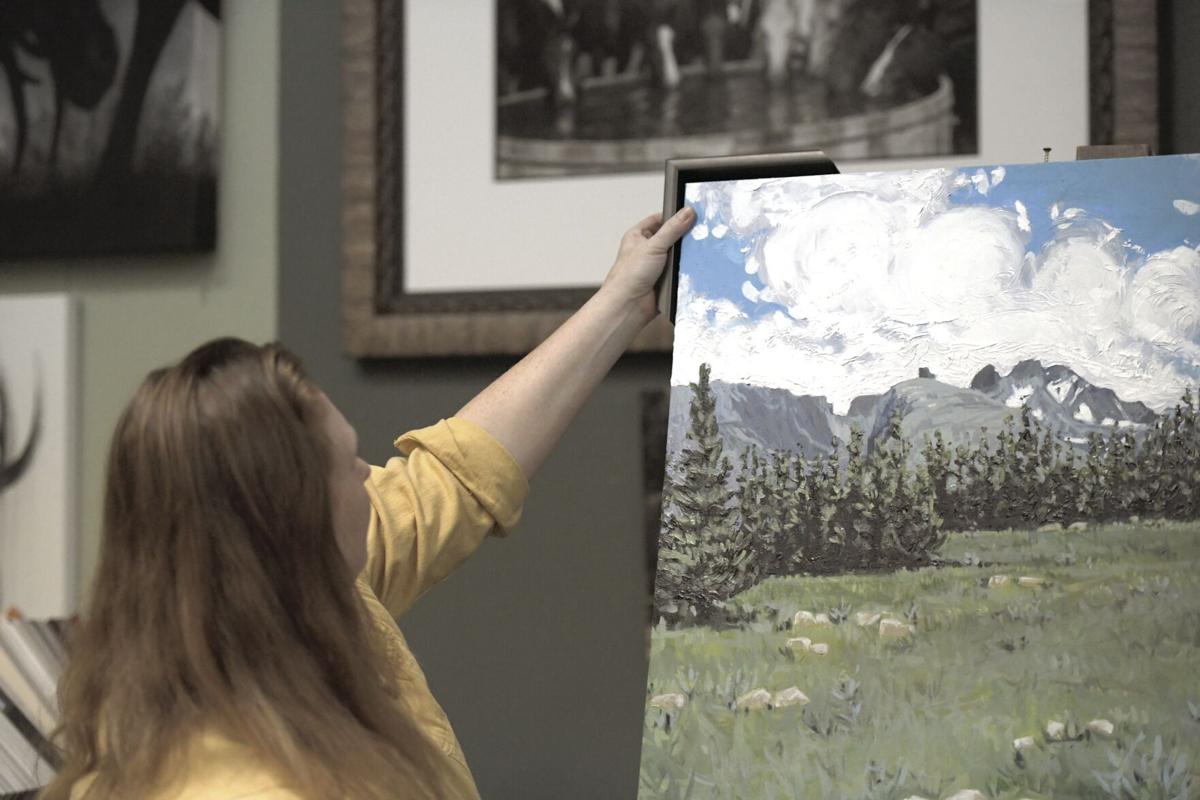 Expressions Art Gallery and Framing Founder Wanda Kerns styles a frame for one painting in the gallery. 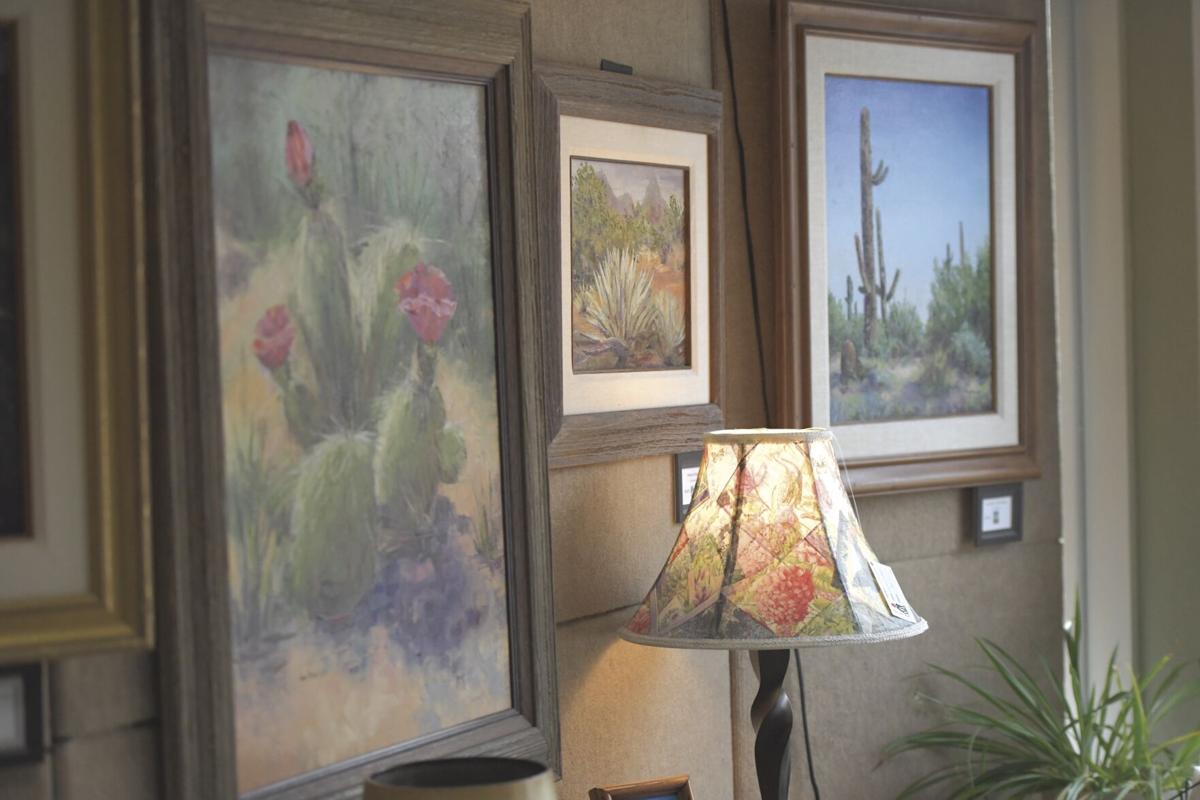 Jan Hodson's paintings of cacti — from her time painting in Arizona — line the walls of Expressions Art Gallery and Framing.

Expressions Art Gallery and Framing Founder Wanda Kerns styles a frame for one painting in the gallery.

Jan Hodson's paintings of cacti — from her time painting in Arizona — line the walls of Expressions Art Gallery and Framing.

SHERIDAN — The “Color of Nature” Art Show, featuring landscapes by local artists Jan Hodson and Steve Bourne, began this month at Expressions Art Gallery and Framing in Sheridan. The gallery’s walls will remain covered in painted saguaros, printed night skies and snow-capped mountains until the end of the month.

The show is Expressions’ first exhibition in more than a year due to the COVID-19 pandemic, said gallery founder Wanda Kerns. The October show, Kerns said, was a way to demonstrate support for the local artistic community and encourage upcoming artists to continue honing their craft while celebrating natural beauty nearby and far away.

Kerns chose to exhibit pieces by Hodson and Bourne — two artists her gallery represents — to incorporate the artists, who are new to the area and new to the craft, respectively, into the Sheridan art scene.

Hodson started painting landscapes in 2000. After receiving a degree in painting from the University of Illinois, Hodson said, “life got in the way” of her early painting career. She married, had two daughters and worked a traditional job.

After retirement, however, Hodson “made a conscious decision to see if [she] could ‘make it’ in the art world” and started painting the desert landscapes that surrounded her then-home of Payson, Arizona.

She made it. Hodson entered national art shows, won awards and gained acclaim among the American Academy of Women Artists, among many other artistic organizations. Her work — the more than 300 paintings she has completed since 2000 — now resides in collections all over the world, as far away as South Africa.

“It is such a great pleasure,” Hodson said “to have people like what I do enough to buy it.”

A self-described “realistic-impressionist,” Hodson’s paintings are meticulously crafted but painted entirely with 1-inch-, 1.5-inch- and 2-inch-long palette knives. She even signs her name at the bottom of her paintings by carefully dragging the edge of a palette knife across the canvas. When she needs to switch colors, Hodson said, she simply wipes extra paint off of the knife with a paper towel, a technique she said keeps her colors more vibrant and precise.

“I keep Bounty in business,” Hodson joked as she discussed her knife cleaning process.

Despite her artistic prowess, Hodson is relatively new to Sheridan. Although Hodson moved to Laramie in 2007 — and landscapes switched from prickly saguaros to snow-covered aspens accordingly — she didn’t arrive in Sheridan until 2017. She and Kerns hope the “Colors of Nature” show will allow Hodson to become well known in the area, as established as an artist as she was in Arizona.

Hodson’s fellow artist in the “Colors of Nature” art show, Bourne, is a digital photographer.

Although he’s been a photographer since receiving his first Kodak — a gift for his 11th birthday — Bourne didn’t start honing his craft as a semi-professional until about 2011, when he produced photos of his father’s metal sculpture and a talented local photographer complemented his skill.

Born and raised near the Bighorn Mountains, Bourne captures sights Sheridan locals see often, but produces unique images of these landmarks — from Steamboat Point to The Mint Bar. The challenge of photography, Bourne said, lies in capturing images no one has seen before and, in all likelihood, will never be seen again.

“There is no challenge in the average shot,” Bourne said.

For Bourne, truly challenging shots usually require waiting for the light to be right. Although Bourne has no formal photography training, his experience and study of the craft have generated a distinctive photographic philosophy: for him, photography is about chasing and capturing light at the right time.

From a long-exposure shot of moving stars and morning sunshine to a photo of the split-second shine of headlights in the forest from a particular angle, Bourne’s photographs in the “Colors of Nature” exhibition demonstrate his commitment to chasing light around the Bighorn Mountains.

Hodson and Bourne agree creating great art is a blend of practical skill, time and talent, but also the artist’s distinctive eye.

“Art is very much what you see and what you experience…” Hodson said, “and most people don’t see everything.”

The two artists’ creations at “Colors of Nature” show, then, encourages everyone to look closely and carefully at the world around them.