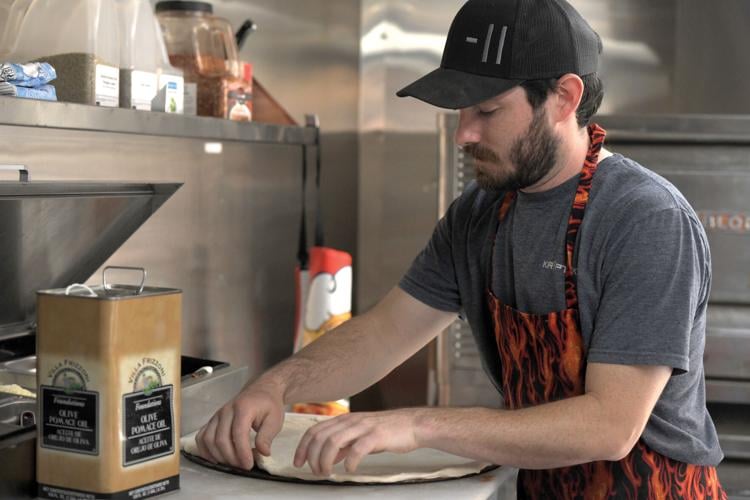 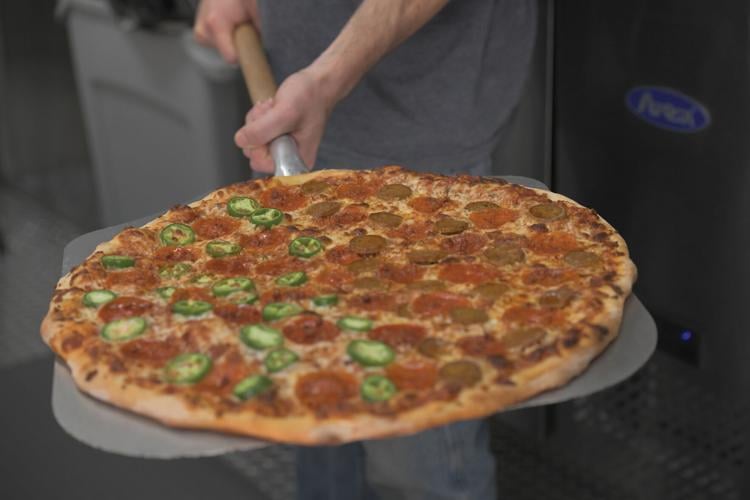 Pete Buswell of Pete's Za Pizza pulls a half meat lover's, half jalepeño, bacon and pepperoni pizza from his pizza oven Saturday, May 21, 2022. 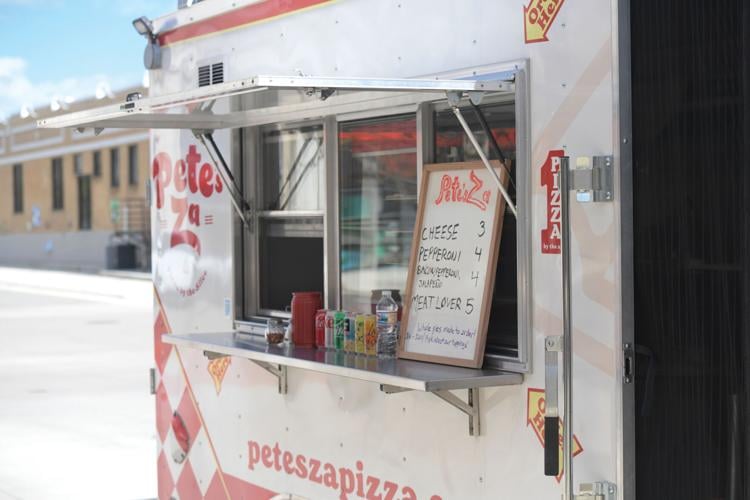 Pete Buswell of Pete's Za Pizza pulls a half meat lover's, half jalepeño, bacon and pepperoni pizza from his pizza oven Saturday, May 21, 2022.

SHERIDAN — As Sheridan residents look forward to a summer of outdoor festivals, concerts and activities, the operators of new local food trucks are busily preparing to meet the volume of eventgoers and their empty stomachs.

Pete Buswell, owner and chef at Pete’s Za Pizza, has been preparing for longer than most.

“I’ve had this dream that I would make pizza ever since I was a kid,” Buswell said.

The name for his food truck — a renovated trailer wrapped in red and white checkerboard vinyl — was an obvious choice; he came up with it as a child, when he first dreamt of becoming a pizza chef. After saving up, Buswell started his pizza business last year and has been selling pizza by the slice and by the pie since November 2021.

The small and contained nature of food trucks allows operators more freedom than they might find at traditional restaurants, Buswell said. Pete’s Za can move to where the crowds are — whether the crowds are outside a local brewery, near a park or at an event — and Buswell can shut down operation whenever crowds start to wane, rather than sticking to a predetermined schedule. Operating near concentrated markets means food truck owners can operate for less time and without consistent hours, Buswell said.

Food trucks also require less space and fewer employees, lowering operating costs. Inside Pete’s Za one recent Saturday, Buswell moved between the trailer’s prep station, pizza warmer and several-thousand-pound pizza oven. Working as server and chef, he switched back and forth between waiting on customers and making pizzas.

After years of receiving compliments on his cooking from family and friends, McKinley started his food truck as a hobby in late 2021. A rancher, McKinley decided to put his cooking skills and a few years experience in the food service industry to work during two of his three days off each week.

“I just kind of fell back on the food service industry. It’s good to make people happy, and I enjoy cooking,” McKinley said.

He decided to sell fried cheese curds — in addition to burgers and Canadian delicacy poutine — at the recommendation of a friend from Wisconsin because there was no restaurant in Sheridan selling the little chunks of cheese.

Soon enough, the whole family got involved in the business. Although Curds of Wyoming has only been out selling curds a few times, the truck provided extra income for the family and a perfect summer job for McKinley’s children and their friends. It’s an activity they can all do together in the community, McKinley said.

He doesn’t anticipate becoming a full-time food trucker any time soon, but McKinley said it is a possibility if Curds of Wyoming becomes extremely popular.

There are certainly aspects of the job Buswell and McKinley said they haven’t mastered. For Buswell, calculating the prep work required for a day’s event can be challenging. Normally, Buswell said it takes him a full day of making pizza dough and shopping for ingredients to get ready for a one-day event. Aside from making more for more people, how much to buy or prepare for an event is sometimes still a mystery.

“That’s a game I’m still figuring out,” Buswell said of trying to determine how much to prepare for eager pizza eaters.

“It’s been challenging, but so far I think it’s going to be worth it,” McKinley said.

This summer, Buswell and McKinley are looking forward to a busy season of serving cheesy delights.

More people and sunshine are sure to bring more business, Buswell said. So far, Pete’s Za’s busiest nights have been in November and December, when Buswell capitalized on the relative lack of food trucks in Sheridan during the winter. With plenty of summer events to cater — including the Sheridan WYO Rodeo, Johnson County Fair and Rodeo, Homebrew Festival and more — Buswell anticipates June, July and August gatherings will attract hungry customers.

Although he said he’s not quite sure what to expect from the summer, McKinley said he’s hoping it’ll be the truck’s busy season. Like Pete’s Za, Curds of Wyoming’s schedule is filling up quickly with events, and the truck is looking forward to continuing to customers outside of event contexts.