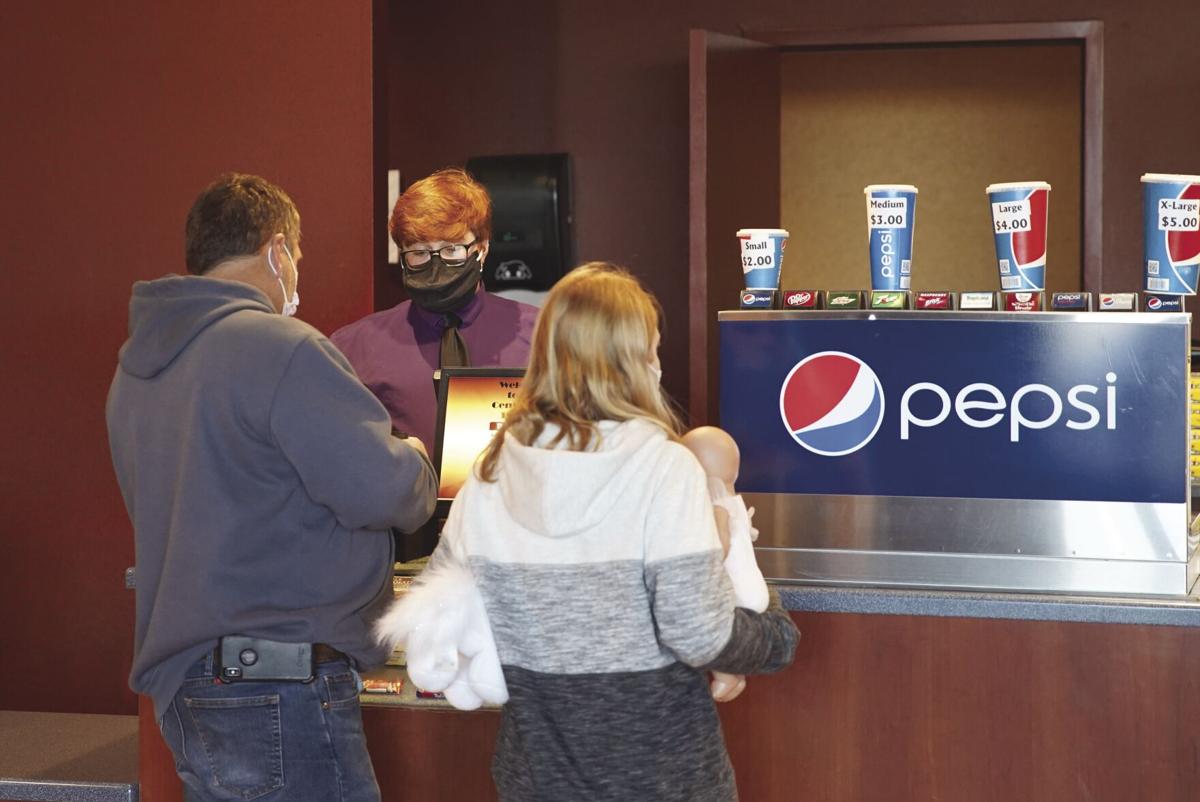 Aydin Cossel sells a pair of movie tickets and some concessions at Centennial Theater Wednesday, Dec. 30, 2020. The Centennial Theater continues to show films despite low attendance and lack of fresh films due to the COVID-19 pandemic and the restrictions that came with it. 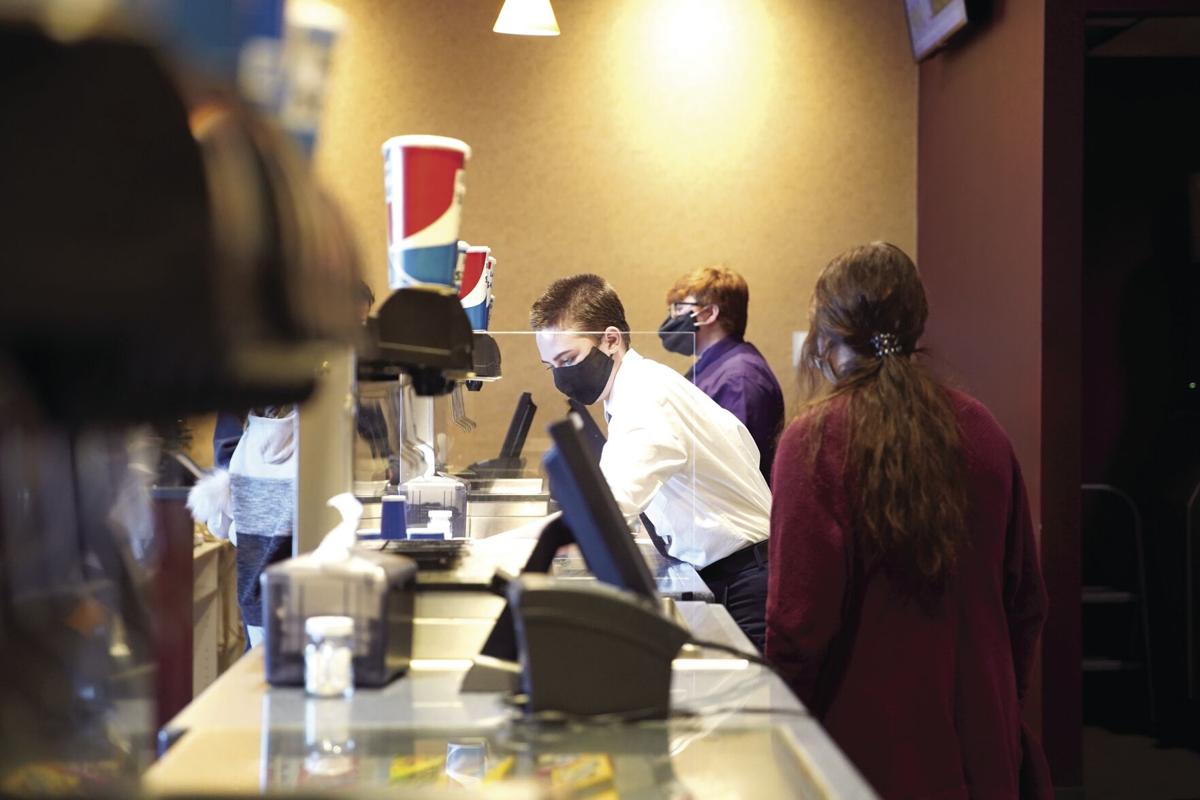 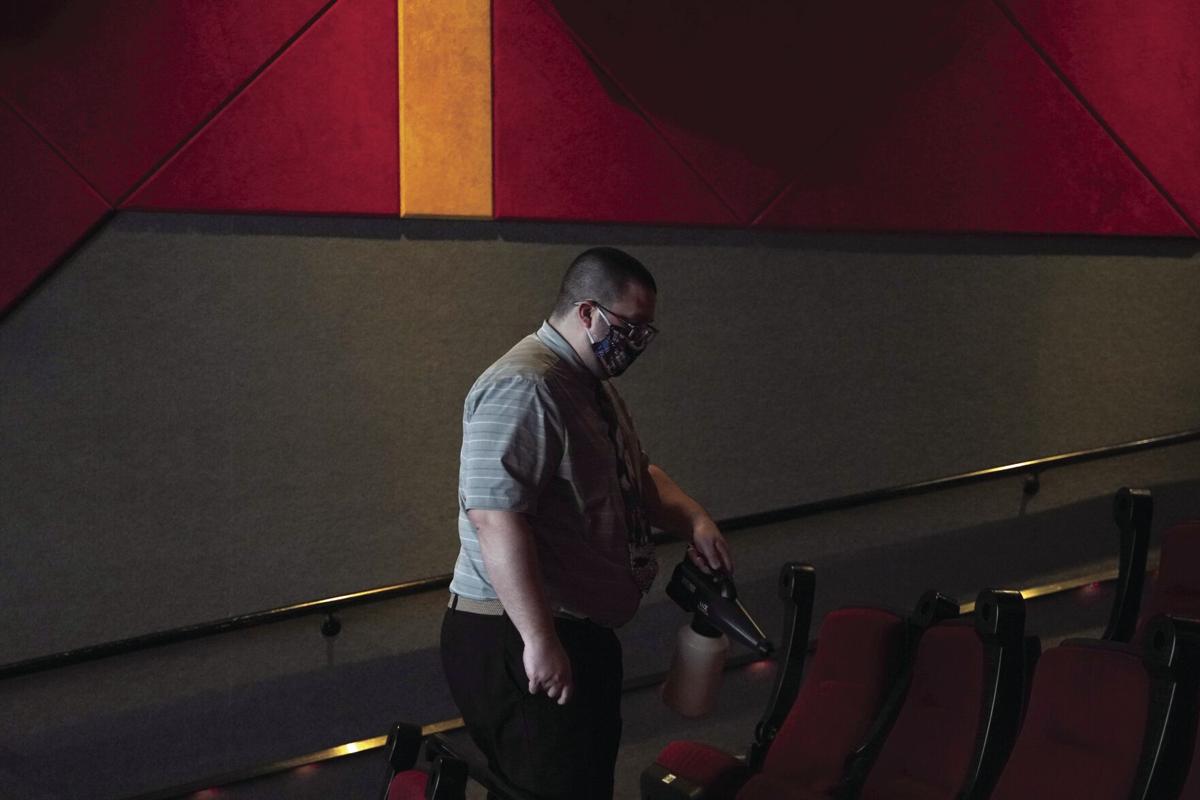 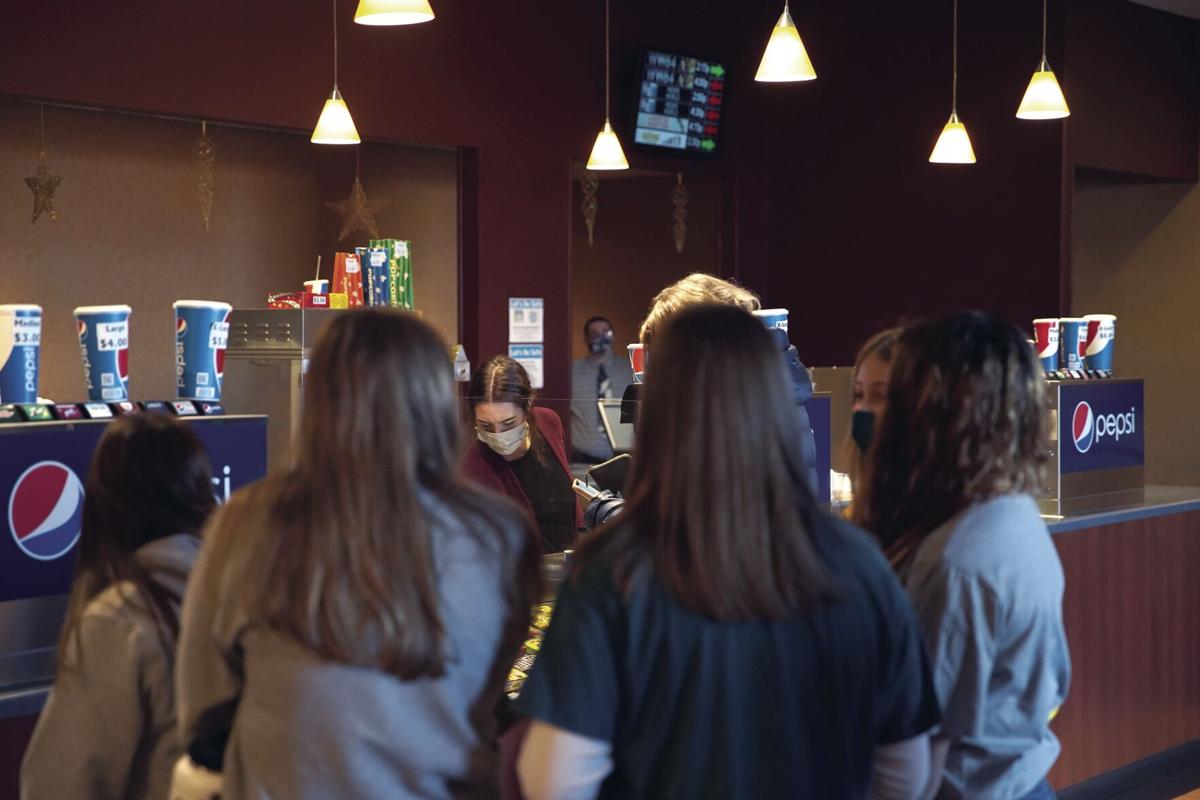 Alexis Dilloway serves drinks and candy to a small group of friends who out for an afternoon at the movies at Centennial Theater Wednesday, Dec. 30, 2020. 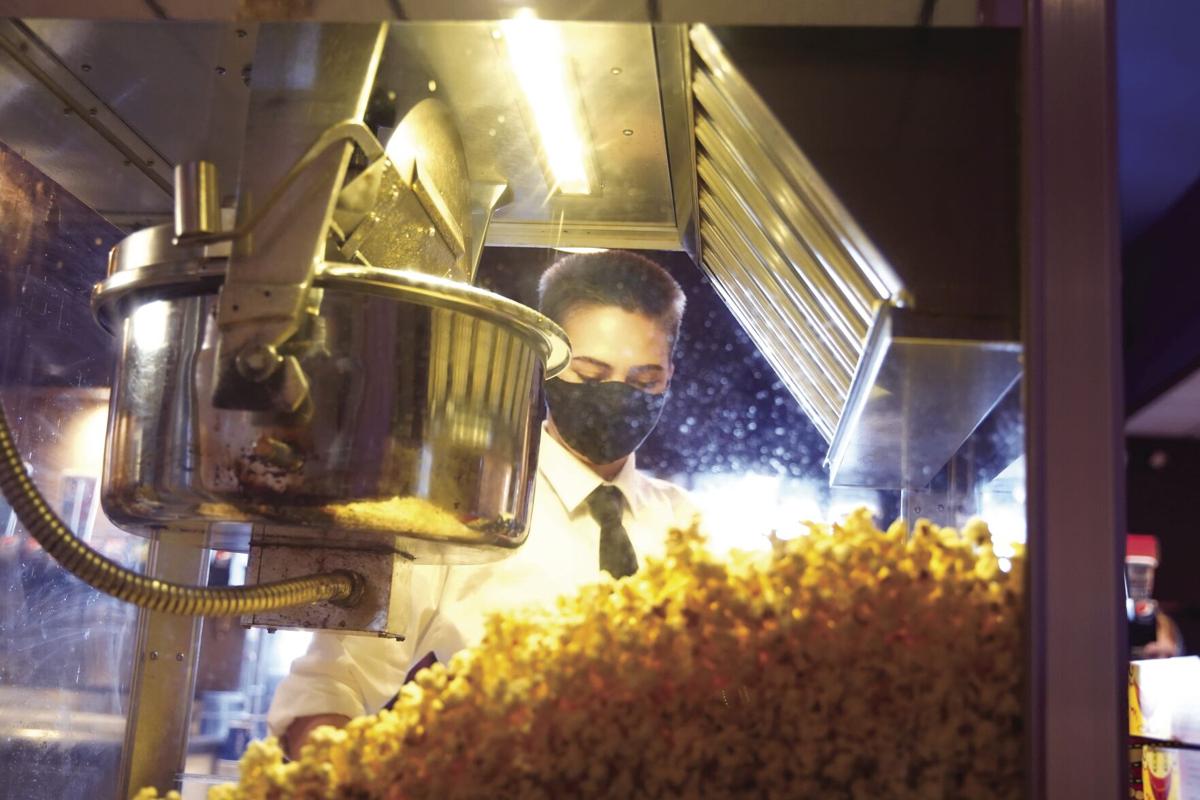 Mallory Arneson serves popcorn to a movie goer at Centennial Theater Wednesday, Dec. 30, 2020. Centennial can now apply for grants from the Small Business Administration that will support six months of employee pay along with costs including rent, utilities and maintenance.

Aydin Cossel sells a pair of movie tickets and some concessions at Centennial Theater Wednesday, Dec. 30, 2020. The Centennial Theater continues to show films despite low attendance and lack of fresh films due to the COVID-19 pandemic and the restrictions that came with it.

Alexis Dilloway serves drinks and candy to a small group of friends who out for an afternoon at the movies at Centennial Theater Wednesday, Dec. 30, 2020.

Mallory Arneson serves popcorn to a movie goer at Centennial Theater Wednesday, Dec. 30, 2020. Centennial can now apply for grants from the Small Business Administration that will support six months of employee pay along with costs including rent, utilities and maintenance.

SHERIDAN  — As director of the Sheridan WYO Film Festival, Justin Stroup has displayed an impeccable taste in films.

But Stroup has a deep, dark secret: He saw “The Net” in theaters no less than six times.

Yes, this is the film where Sandra Bullock is hunted by an evil organization desperate to get their hands on a link to a website for something called Mozart’s Ghost. And, no, Stroup isn’t proud of it.

“I saw that movie way more times than any human being should have to see that movie,” Stroup said with a laugh.

What kept Stroup coming back time and again? The same thing that brings him to any theatrical release, he said: a strong sense of community.

“Every time I went to the theater, I would run into people I wanted to hang out with and every single time, they wanted to see ‘The Net,’” Stroup said. “The theater was just this special place where I could connect with people — friends, family and even complete strangers. There’s something about sitting with a group of people, laughing together and responding to the things we’re seeing on the screen together. It’s part of the human experience to be part of an event like that.”

The filmgoing element of the human experience, like many things in the age of COVID-19, has become a lot more complicated in recent months. For a variety of reasons, filmgoing — an activity predicated primarily on sitting in close contact with a lot of strangers  — has become a lot less attractive, and the long-term sustainability of the industry has been called into question.

While the local Centennial Theatre has kept its doors open throughout the majority of the pandemic, the ever-shifting cinema landscape has film fans like Stroup pondering whether the next generation of film lovers will have the same formative experiences he had in movie theaters.

“I think it goes without saying that any generation of kids never has the same experiences as the prior generations,” Stroup said. “That is a constant throughout history. Some things are lost and some things are gained. I think people will continue to connect over entertainment, and theaters will hopefully still be a part of that, but it might not look the same as it always has.”

As of Dec. 28, 60% of U.S. and Canadian movie theaters had closed their doors for pandemic reasons, according to Deadline. Two major theatrical chains  — AMC and Regal  — are in the process of restructuring financially and considering bankruptcy.

The local Centennial Theatre is, by comparison, doing quite well, according to owner Bill Campbell. The theater has been open since summer, and Campbell’s had enough cash on hand to keep the lights on and employees paid.

“I’m burning through cash, but we’re not in debt, which has allowed me to burn through that cash,” Campbell said. “I strongly believe that our local movie theater should always be open. But that being said, I ask myself every week if this is the week we should close. Is it too much money to burn?”

“There are three main reasons for that,” Campbell said. “Like everybody, we got shut down this spring, which was an initial blow. But even though we reopened this summer, people didn’t come back. Part of that is we have limited capacities and part of it is a lot of people just don’t feel comfortable returning to the theater just yet. But the biggest problem has been product.”

Starting in March, film studios started pulling their films from theatrical release schedules, Campbell said. Some of those, like Disney’s high-profile “Mulan” remake, became streaming service exclusives. Others are still pursuing theatrical releases but have been put on the shelf indefinitely. That has left Campbell to fill his screens with a mix of classic product  — both “Elf” and “National Lampoon’s Christmas Vacation” lit up the screens this holiday season   — and new films from smaller independent studios.

This release model has had sporadic, but limited, success, Campbell said.

“Films like ‘Let Him Go’ with Kevin Costner and ‘Half Brothers’ haven’t had tremendous success,” Campbell said. “But those might have been harder sells even if there wasn’t a pandemic happening. There’s the old adage that ‘content is king’ and, if the content isn’t there, people aren’t going to watch it.”

The theater is currently screening its most high-profile content in months:  Warner Brothers’ “Wonder Woman 1984”. While audiences have been coming out for it, the film also poses a potential threat to the future of movie theaters, Stroup said. “Wonder Woman” is the first of an entire year’s worth of films Warner will release simultaneously in theaters and on their streaming platform HBO Max.

“With Warner Brothers releasing ‘Wonder Woman’ on streaming and in theaters simultaneously, it begs the question ‘Are people going to consume movies at home more than they already were?’” Stroup said. “Centennial thankfully keeps the prices low, but at some of those national chain theaters, it is easy to pay $50 to $100 to see a movie you might not even like. People are going to ask themselves if that experience is still worth paying $100 for.”

Campbell said he was disappointed by Warner’s announcement.

“‘Wonder Woman’ was announced first, and I kind of understood that,” Campbell said. “I understand that they have to make money back on their investment. And given the situation across the country, you either have to do this hybrid model like Warner is doing or go straight to streaming like Disney did with ‘Mulan.’ But when they announced they would do it for their whole slate in 2021, that raised more eyebrows, especially when we should be getting over this COVID stuff by mid-year. I understand why Warner Brothers did it. Everybody wants to be the next Netflix or Disney+. But that decision will have an impact on local theaters, especially if it continues once this pandemic is behind us.”

Despite the challenges, Campbell said he was optimistic about the future of the local theater, which has been in his family since its construction in 1976. The coronavirus relief package the U.S. Congress approved just before Christmas included $15 billion earmarked for independent entertainment businesses including movie theaters.  Centennial can now apply for grants from the Small Business Administration that will support six months of employee pay along with costs including rent, utilities and maintenance.

“That should be enough to help me keep the door open for six to nine more months,” Campbell said. “By then, things will hopefully start turning around. It will take a while for people to feel safe at the movies again, but it is not an insurmountable challenge. Things are still strong at Centennial and everywhere movies are allowed to show. We are just waiting for people to feel safe and for the content to come back.”

Stroup agreed communal movie watching would come back in some shape or form after the pandemic, but for now film buffs have to wait for that normalcy to return — and hope theaters like Centennial can survive the wait.

“Movies are a pretty special part of culture and society,” Stroup said. “They are a good escape from real life but also a way to enrich life. I think there will always be that desire to share these experiences with our friends and our family and total strangers, and I definitely hope that, when we all feel safe to gather together in indoor spaces with strangers again, people will go back to the movies.”