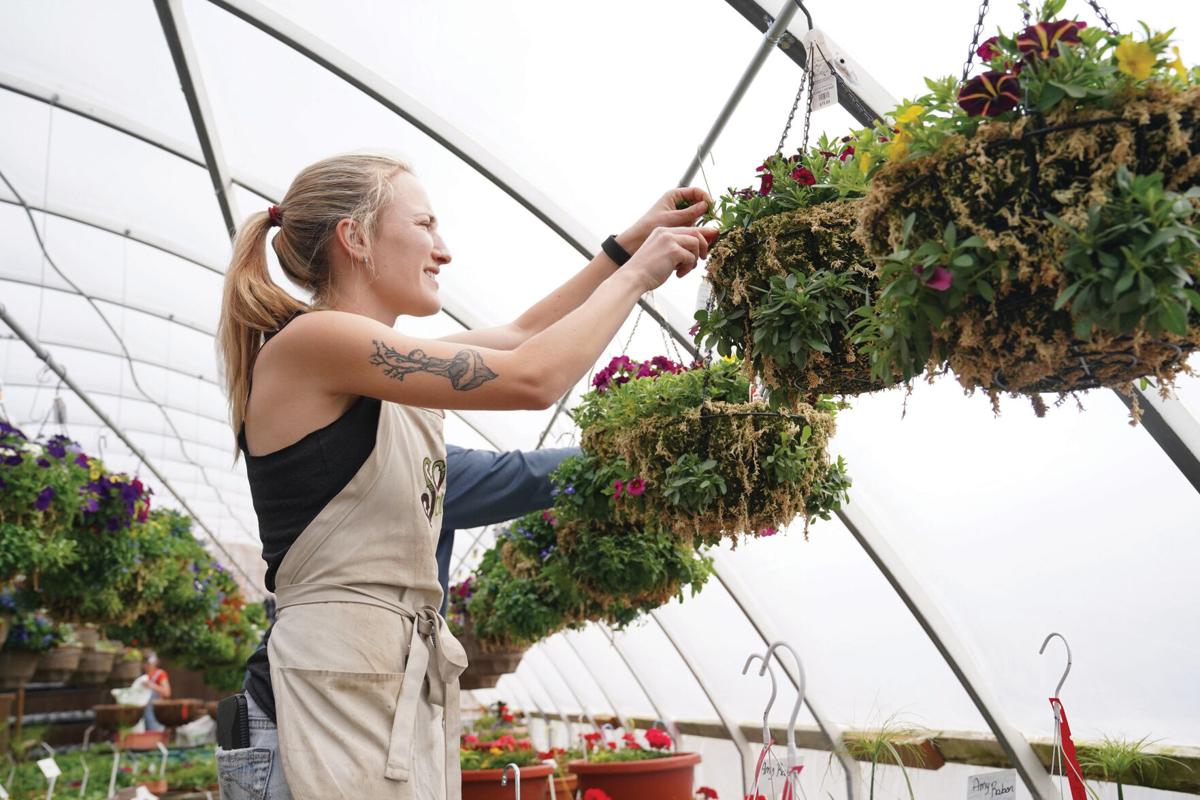 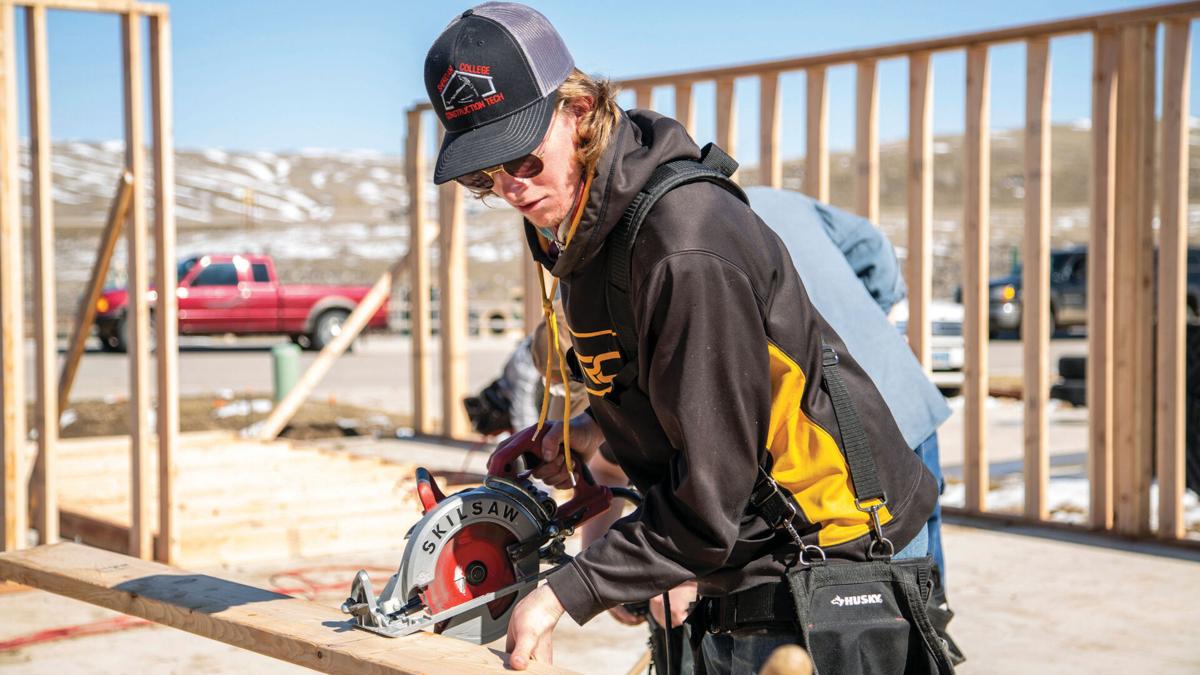 Sheridan College construction technology student Blaine Miranda cuts a board to length while working on a Habitat for Humanity home. 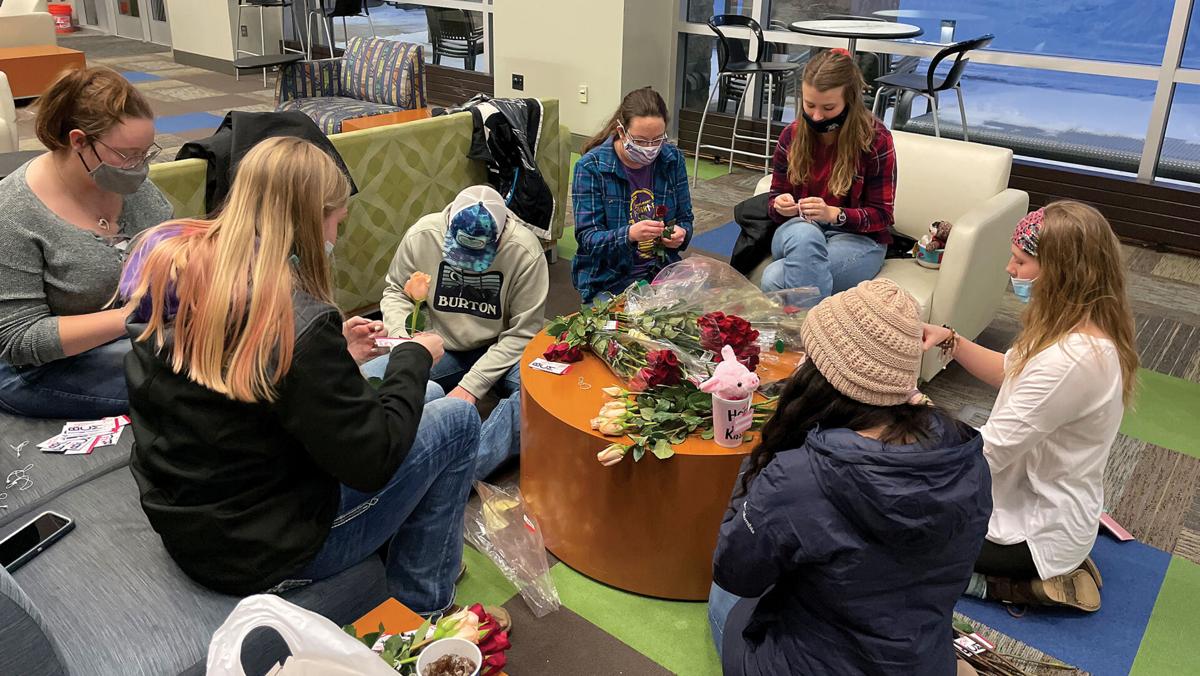 For the last several years, Collegiate Ministries has partnered with Legacy Pregnancy Center to give roses to students during the week of Valentine's Day. Each rose has information about Legacy's services, an invitation to CM and a note that says, "You are loved." Becky Rosty said CM students are overjoyed each year to spread the love to hundreds of their peers.

Sheridan College construction technology student Blaine Miranda cuts a board to length while working on a Habitat for Humanity home.

For the last several years, Collegiate Ministries has partnered with Legacy Pregnancy Center to give roses to students during the week of Valentine's Day. Each rose has information about Legacy's services, an invitation to CM and a note that says, "You are loved." Becky Rosty said CM students are overjoyed each year to spread the love to hundreds of their peers.

Whether official programs of the college or grassroots efforts to engage young adults, Sheridan College students receive experience and find their place in the community through multiple avenues.

Before a transition in the 1960s and 1970s, two-year institutions looked more like community-based and community-focused training centers rather than institutions providing a full college experience. Community colleges primarily offered continuing education for vocations and classes for older adults seeking new or additional skills.

With the addition of residential housing on campuses, two-year community colleges became more like four-year institutions, according to former Sheridan College President and former Sheridan County Commissioner Steve Maier. That transition changed the culture and, thus, the relationship students had with the community in which they studied.

“We were a leader, as well as Rock Springs, we were the two...both trying to become more community-based, better technology and good transfer rates,” Maier said.

More recently, those connections have come in the form of partnerships with businesses providing work experience.

Sheridan College boasts numerous official and unofficial partnerships with the community. Unofficial connections include the dance, theater and music students who perform often for community members at the Whitney Center for the Arts. Dance students partner with the WYO Performing Arts and Education Center throughout the year, as the WYO provides studio space to practice and host clinics for the community.

Officially, the construction, agriculture and nursing programs at Sheridan College offer several opportunities to connect with business people, while the dental hygiene program hosts its own low-cost dental clinic on campus for community members. Josh Michelena, a Sheridan College construction technology faculty member, has facilitated an internship partnership with Habitat for Humanity of the Eastern Bighorns for well over a decade, allowing hands-on experience to complement material learned in the classroom.

“They’re getting experience in (many) different aspects,” Habitat for Humanity of the Eastern Bighorns Executive Director Christine Dieterich said of the participating Sheridan College students. “As well as giving back to a nonprofit in a community and relating the importance of a critical need for affordable housing for what they’re doing.

Michelena said he receives three to four calls each week from construction companies looking for workers for specific jobs.

The same positive partnerships exist in the agriculture department, with Sheridan College Ag Director Mae Smith coordinating efforts with several of her faculty members and students. From Sheridan College agriculture graduates working at Landon’s Greenhouse, Nursery and Landscaping, to students growing flower baskets that hang on Main Street, ag students’ impact can be seen in almost every corner of Sheridan County.

“It’s fantastic to see our students get their degree in horticulture and then move across the road and start doing it as a business,” Smith said, nodding to Sheridan College alumni working at Landon’s Greenhouse. “…It’s really win-win for both of us.”

Collaborations between students and local organizations and businesses like Rooted in Wyoming, Black Tooth Brewing Company, Sackett’s Market, the Food Forest, Downtown Sheridan Association and University of Wyoming Research and Extension Office in Sheridan don’t begin to cover the connections Sheridan College has with its community, and vice versa.

The community feeds the college, and the college feeds the community in multiple avenues, both paid and unpaid, official and unofficial. Likewise, Sheridan College employs 107 Sheridan County citizens, feeding into the local economy by paying $6.36 million in instructional salaries, representing 34% of all salaries paid, compared to a median of $5.1 million for similar community colleges, according to datausa.io statistics.

Becky and Shane Rosty moved to Sheridan 11 years ago to start a Christian college student ministry. With goals to find jobs to support their ministry work, the Rostys have opened up their home and have seen their impact spread throughout the community.

“And the students that do move on from here, we’ve seen them go on to plant more collegiate ministries elsewhere and help build churches,” Rosty continued.

Students often feel comfortable enough to invite others into the Rostys’ home as if it were their own, which the Rostys love and appreciate being able to provide that home- and family-like feel for college students, from meals to firepit circles held each Sunday evening.

The ministry aims to connect college students with home churches, partnering with several churches in the community to help foster supportive, open relationships with students. That has looked different over the years, like the group visiting several churches through a progressive dinner evening, where students enjoy courses of a meal at different church locations while meeting church members and learning more about what each church has to offer.

The Rostys take a backseat after training leaders, as ministry and outreach elements in the community are organized by student leaders in the group.

“We lead a leadership team of students. (Collegiate Ministries) is student-led, and as the directors, our job is just to train and encourage and really put the wind in the sails of students to do the ministry,” Becky Rosty said. “Every year we have anywhere from five to 15 leadership students who receive team-building training, leadership training…”

“With the goal that they would know how to be the future elders and deacons and leaders of the church,” Shane Rosty finished.

Overall, the Rostys and their large team of community members continue to engage students, whether they leave the community right after receiving their two-year degree or stay to become dental hygienists, babysitters and contributors in area communities for longer than three years.

“Hopefully when they go somewhere else, in the back of their minds they’ll remember the seed was planted in Sheridan or maybe that the launchpad was Sheridan,” Becky Rosty said. “‘This is where I figured out I had potential. The two years there, it wasn’t forever, but it was a really meaningful and impactful time to get started.’

“We think of ourselves as the seed-scattering place, and a lot of those seeds come back and they get rooted here and they are our dental hygienists and our guardian ad litems and nurses and teachers. It’s so exciting,” she continued.

Across a variety of avenues, Sheridanites can see the impact Sheridan College students have on the county and, simultaneously, how the community has an impact on Sheridan College students. Together, each play important roles in creating a thriving environment for students to learn, grow and flourish. Becky Rosty said the students they encounter love Sheridan — especially those from outside the area — because of the college and the community support.

“I think (Sheridan College’s) goal has been equipping students to succeed,” Shane Rosty said. “I think that’s always been a real desire, to give them experiences.”