Sign Up
Log In
Purchase a Subscription
You have permission to edit this article.
Edit
News
Sports
A&E
Business
Opinion
Obituaries
Multimedia
Announcements
e-Edition
Classifieds
Business Directory
Share This
1 of 3 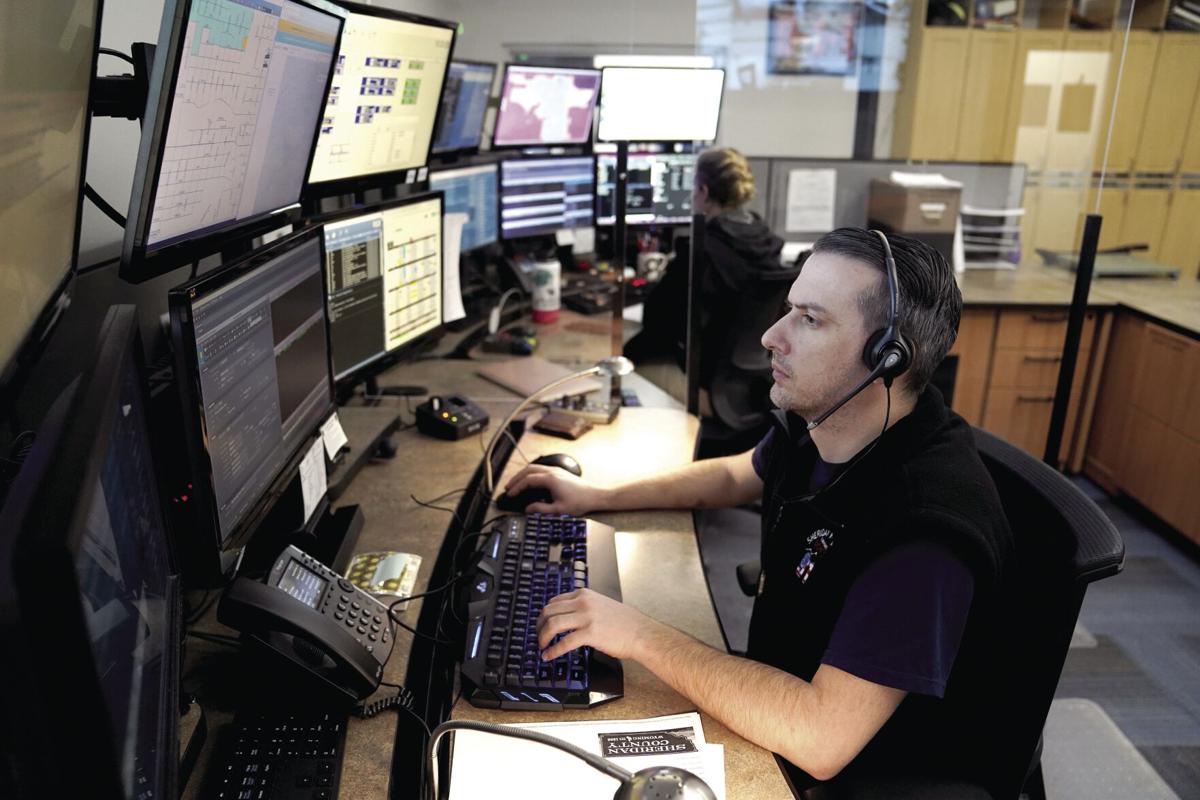 Dispatcher Kellen Phillips works at his desk at the Sheridan Police Department Tuesday, Feb. 16, 2021. Fifteen years in, Wyoming’s statewide communications network known as WyoLink is getting an update, with 16 new towers and broadband internet where possible. The Wyolink system is used by both the police department and the sheriff’s office. 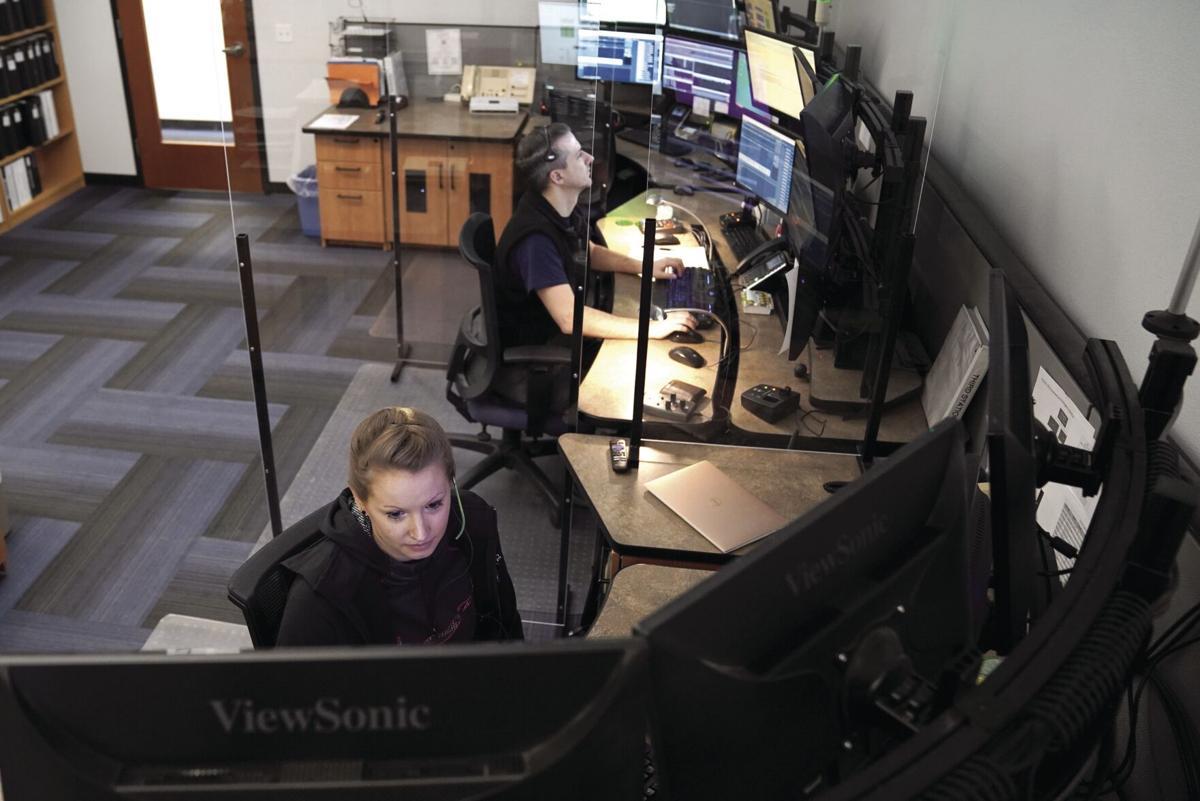 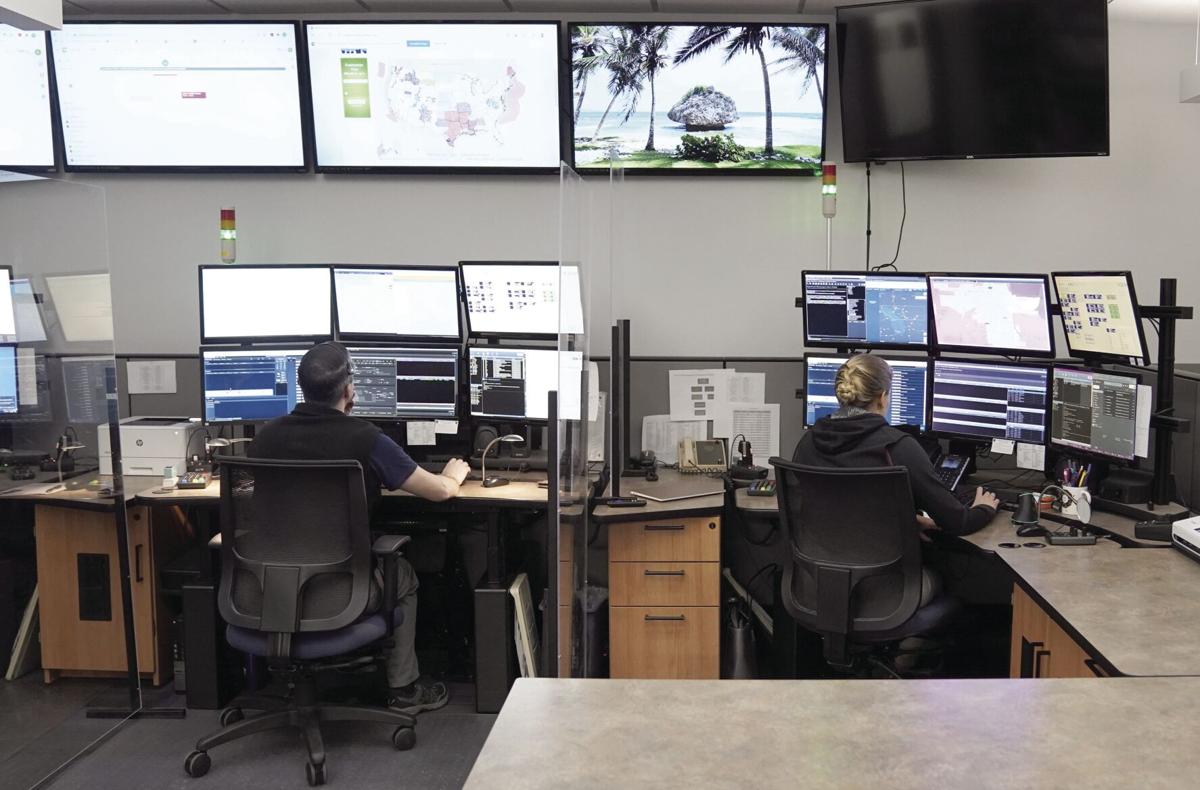 Dispatcher Kellen Phillips works at his desk at the Sheridan Police Department Tuesday, Feb. 16, 2021. Fifteen years in, Wyoming’s statewide communications network known as WyoLink is getting an update, with 16 new towers and broadband internet where possible. The Wyolink system is used by both the police department and the sheriff’s office.

SHERIDAN — Fifteen years in, Wyoming’s statewide communications network known as WyoLink is getting an update, with 16 new towers and broadband internet where possible.

The system was created to meet interagency communications needs in a post-9/11 world, and has grown to support more than 16,000 registered radios. Users range from snowplow drivers to officers with the Wyoming Highway Patrol to National Weather Service personnel.

“We had over 12 million calls on WyoLink in 2019, and we are still getting 2020 data,” said Troy Babbitt, chief technology officer for the Wyoming Department of Transportation. Babbitt also oversees WYDOT’s transportation management center, which, with locations in Cheyenne and Casper, act as information sharing hubs for people on Wyoming’s roads.

“Now with high-capacity broadband, we’re connecting a lot of those towers, where it is possible and where we can, with fiber optic,” Babbitt said.

An upgrade on WyoLink towers to broadband means a move away from limitations of bandwidth size.

“If we can get it on fiber, now it is scalable. Now you can crank that thing up to megabitz to gigabitz, and you can push not only voice but high graphics, apps, images, video, all those types of things,” Babbitt said.

The interoperable mission control voice system is a far cry from the days before the Sept. 11 attacks in New York and at the Pentagon, when lives were lost because police officers, firefighters and other first responders were not able to communicate in an emergency.

“This system, when you say ‘interoperable mission control voice,’ those words all mean a lot,” Reiner said. “Interoperable comes out of the disaster at the Twin Towers in 2001. When the police and the firemen could not talk to each other, America — and specifically New York — lost lives. The communications were not working.”

In Sheridan County, WyoLink is used by law enforcement agencies, Sheridan Fire-Rescue and Rocky Mountain Ambulance, Capt. Tom Ringley with the Sheridan Police Department said. WyoLink is also available to rural fire departments, who use the radio system based on the needs of each agency.

The Sheridan Police Department uses the WyoLink radio system to assign and respond to calls for service, relay orders and instructions, exchange information and to request resources.

“It is vital that the police department has a consistent, reliable mechanism for communication because it allows us to monitor unit activities from a safety stance and also to insure timely  service to our customers,” he said. “WyoLink allows the Sheridan Police Department to communicate seamlessly with partner agencies such as the Sheridan County Sheriff's Office, Wyoming Highway Patrol and Sheridan Fire-Rescue.”

According to Babbitt, there is always a WyoLink radio in WYDOT maintenance snow plows, in Wyoming Highway Patrol vehicles and even in many school buses across the state.

“You can have a snowplow operator who will call in something to the transportation management center, and it will show up on your 511 app on your phone minutes later. That is the power of that real time communication,” Reiner said.

“WyoLink gives us a constant communications link with the 911 centers and also emergency management,” Troutman said. “We will broadcast our emergency message on the WyoLink system, so first responders get a heads-up that a severe weather warning is coming.”

“We are constructing 16 new towers, and five of those are completed,” Babbitt said. One is in Buffalo, with locations specifically chosen to allow for better coverage in the state’s rural areas.

“In 2013, there was a survey done with the Public Safety Communications Commission, and these 16 sites were identified as the primary sites that needed to be picked up next. That is how they were determined,” he said, adding that the existing 77 towers will be updated with fiber optic capability when possible.

WyoLink was built for the state’s unique needs, he said, but has a similar footprint to other interoperable emergent radio systems.

“If you look at our neighboring states, there are very similar radio systems that can interoperate on WyoLink,” he said. “Neighboring states in certain locations actually do have registered accounts into our WyoLink network, so when they cross the boundaries they can get on our system.”

With over 500 users, Reiner said WyoLink is now invaluable to the state.

“When you say over 500 users, that’s a big deal. It is certainly state agencies, but it is local law enforcement, it is sheriffs offices, it is school districts and it is federal partners,” he said. “Yes, it is how we respond to a wreck on the road, but it is also, if your house is getting broken into and you call 911, it is likely that the dispatch’s response will be over a WyoLink type system.

“If your spouse is in a wreck, or your mom is in a wreck on Wyoming roads, the way we get patrol and emergency medical is through WyoLink. If your kids are on a school bus and stuck, the way they call for help is WyoLink,” Reiner said. “WyoLink allows communication across the state, even where we have cell phone dead spots. It is how we communicate in this state.”