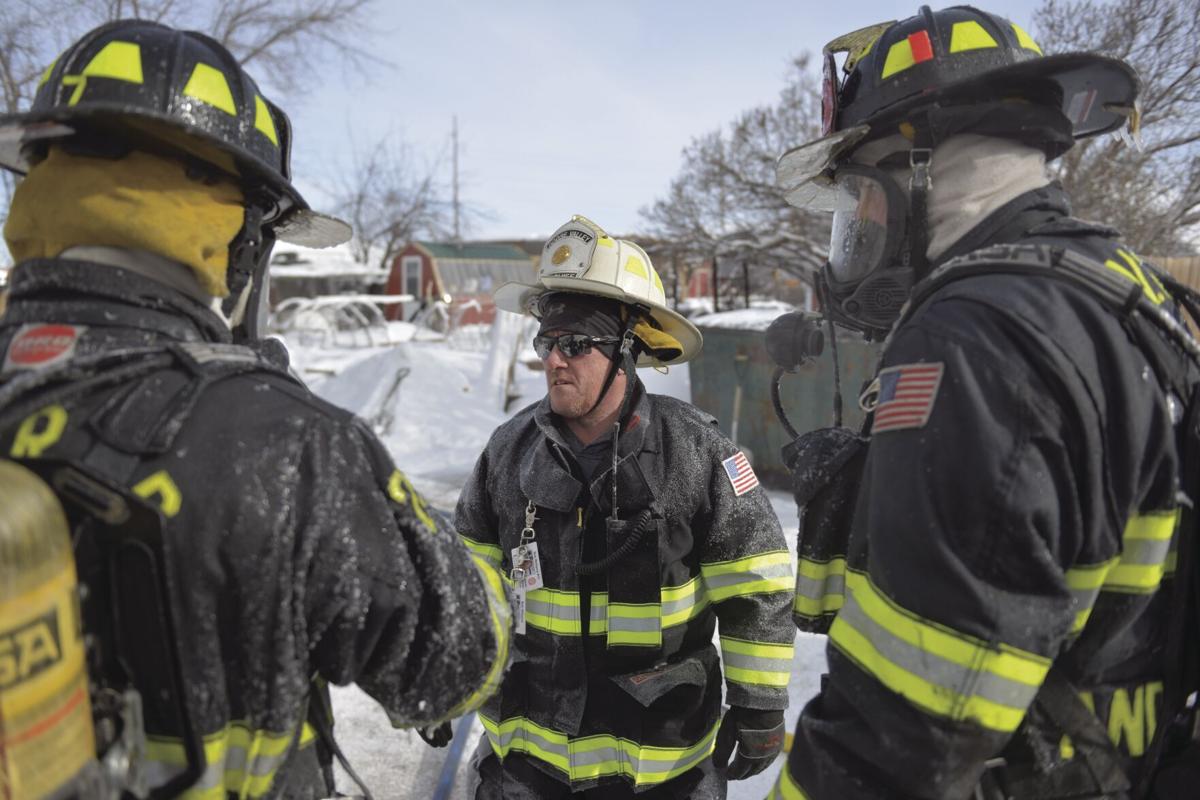 File photo | The Sheridan Press Goose Valley Fire Department Chief Bob Williams talks with volunteer members of the department on a call in 2018. Williams retired recently after more than 12 months of service to the county. 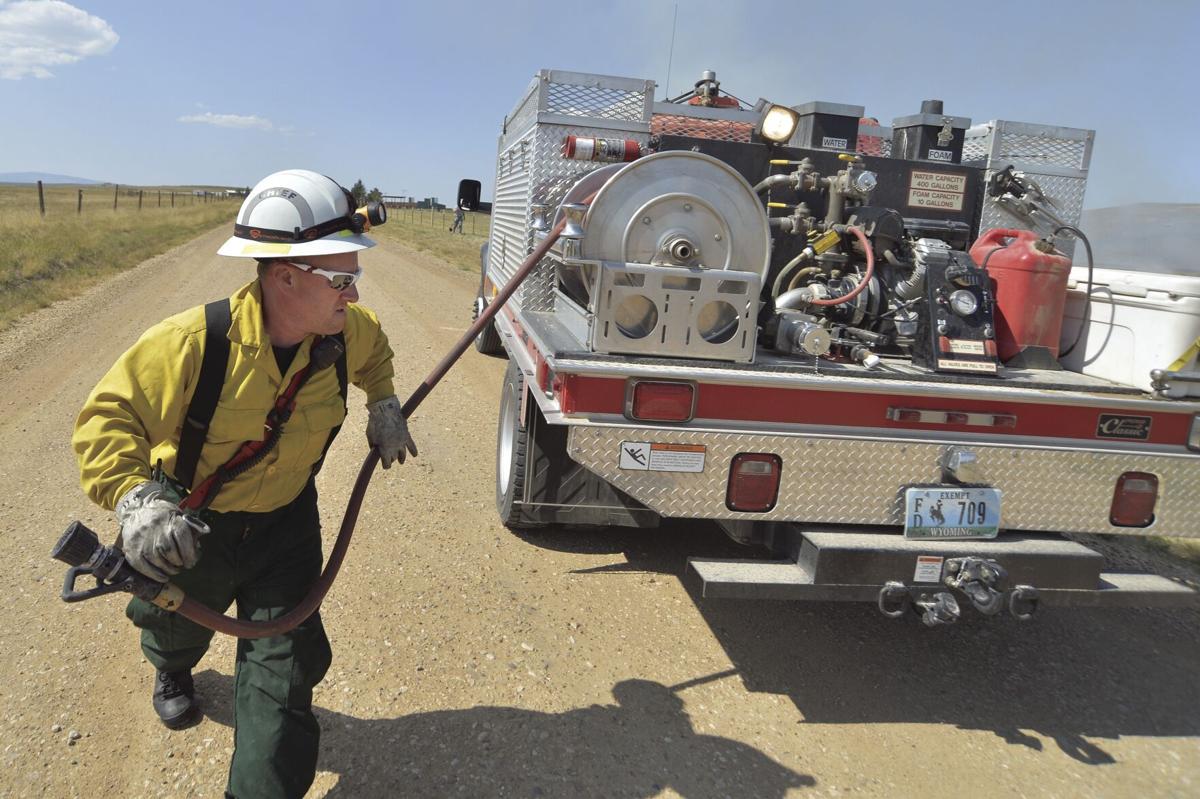 Justin Sheely | The Sheridan Press Goose Valley Fire Department Chief Bob Williams pulls a hose from the fire engine to douse a section of a grass fire near the Sheridan County Sportsman Gun Club off Keystone Road West of Sheridan in 2015. 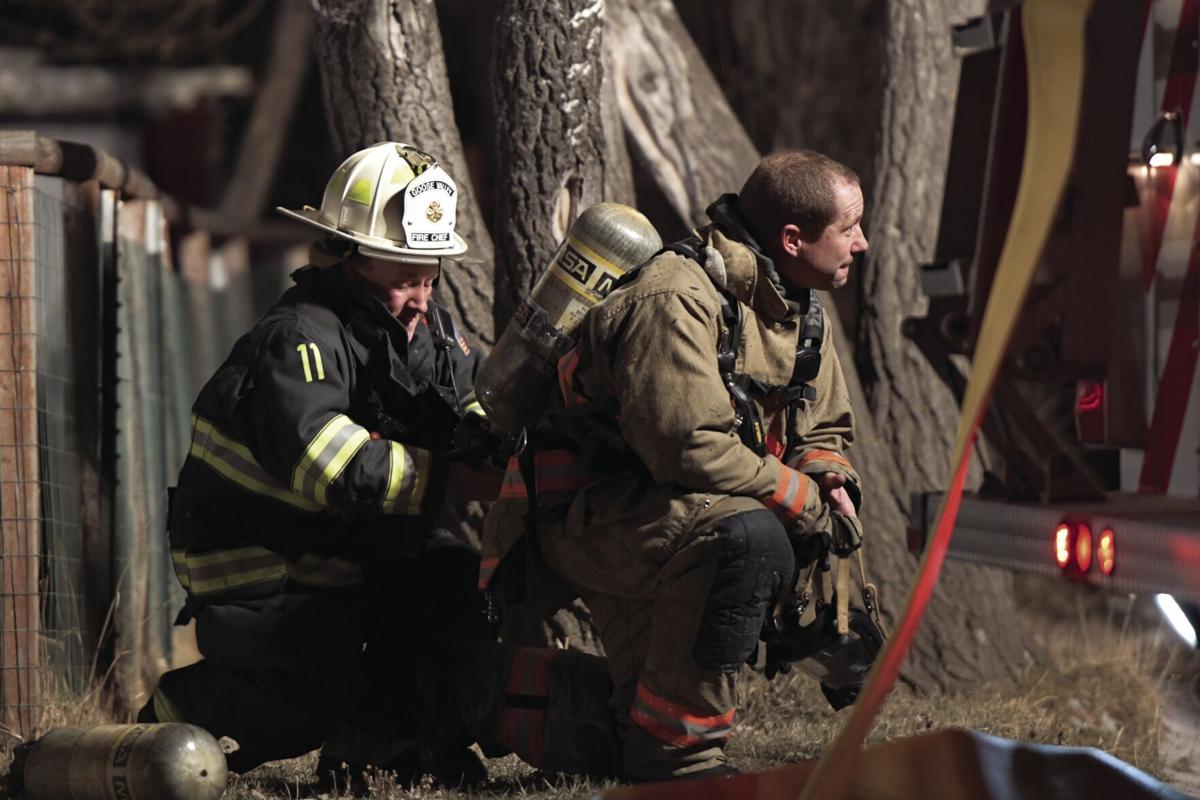 Goose Valley Fire Chief Bob Williams assists a Sheridan firefighter exchange a spent oxygen tank for a fresh one after responding to a structure fire Tuesday, Dec. 24, 2019. No injuries were reported.

File photo | The Sheridan Press Goose Valley Fire Department Chief Bob Williams talks with volunteer members of the department on a call in 2018. Williams retired recently after more than 12 months of service to the county.

Justin Sheely | The Sheridan Press Goose Valley Fire Department Chief Bob Williams pulls a hose from the fire engine to douse a section of a grass fire near the Sheridan County Sportsman Gun Club off Keystone Road West of Sheridan in 2015.

Goose Valley Fire Chief Bob Williams assists a Sheridan firefighter exchange a spent oxygen tank for a fresh one after responding to a structure fire Tuesday, Dec. 24, 2019. No injuries were reported.

SHERIDAN — At one of Goose Valley Fire Department’s first meetings, Fire Chief Bob Williams had to prop open a door so the volunteers who stood outside could participate. The department’s office on Frank Street at the time wasn’t large enough for the entire group to gather.

More than 12 years later, inside a fire station completed in 2012 and surrounded by some of the same volunteers who attended that first meeting, Williams retired as chief of the department he helped create.

“It’s time,” Williams said of his decision to retire, adding that he wouldn’t miss the hours away from family, the politics of the position, the pager sound at 2 a.m. or the paperwork.

He would, though, miss the time spent with the volunteers who comprise the department.

Of the 20 volunteers who started with GVFD in 2008, its inaugural year, seven remain.

“Bob instilled in the members of Goose Valley the determination to become one of the finest, if not the finest, volunteer fire departments in Wyoming,” said Pete Husman, who has served with GVFD since its inception. “He had this vision from the first day even though we had no experience and no equipment.”

Williams, who works full time as an electrician, recalls those early days as exceedingly difficult.

He had moved to Wyoming a couple years before GVFD formed. In Minnesota, he had retired as a chief officer from a fire department with approximately a century of operations under its belt.

When his wife, Lori, came home one day with an application to join a local volunteer fire department in Sheridan, Williams said he wasn’t sure he was ready to jump back into the job.

“It sat on the table for about three months,” he recalled.

Eventually, though, he filled out the application and brought it down to the courthouse. He had thought he was applying for an established department. Only later did he find out the department was brand new, and its purpose was to serve the “doughnut” area around the city of Sheridan.

“I remember asking where they stored their trucks,” Williams said. “I was told there are no trucks, no equipment. They were starting from nothing.”

After being asked to do so, Williams submitted an application to become chief of the department and shortly thereafter took on that role.

The first year proved more difficult than Williams imagined. Beyond the logistics, training and equipment required to build a new department, Williams said the new entity faced backlash from other firefighters in the community.

“At one of the early training meetings, we complained to Bob about how the rest of the fire community looked down and even shunned us,” Husman recalled. “He assured us that if we would get on with training and apply ourselves, we would overcome that. He was right!”

But it didn’t come easy, and Williams said it took a few years for other departments to accept them. The moment he could tell the tide shifted, he said, was one day when GVFD was assisting Sheridan Fire-Rescue on a house fire in the city. Brett Smith, one of the SFR firefighters at the time, encouraged one of the GVFD firefighters to confront one of the other SFR firefighters as a joke. When the confrontation happened, Smith just started laughing, easing the tension and opening the doors for camaraderie.

That relationship with SFR, and the other volunteer departments in the county, only continued to grow under Williams’ leadership.

Once the GVFD station near the airport was completed in 2012, and offered enough space for the entire department to gather, the volunteers began sharing a meal on the first Thursday of every month. That day is when GVFD gathers for its business meeting, so a shared meal offered an opportunity to help the volunteers get to know each other and build trust while also adding an element of fun to the sometimes difficult commitment.

GVFD also conducts trainings every Thursday for its volunteers and has high expectations for certifications and attendance.

At times, those trainings and meals have included other departments.

“Sheridan Fire-Rescue and GVFD have been partners since their inception,” SFR Chief Gary Harnish said. “We have trained together and assisted each other through mutual aid on many calls over the years. They are a great partner for us and a great resource for the entire county.”

After starting with nothing, Williams said the biggest accomplishment of the department over the last 12 years has been getting those initial 20 volunteers certified as Firefighter I and Firefighter II, then maintaining that requirement for new volunteers.

Beyond that, Williams said he’s particularly proud of showing the community that a group of dedicated volunteers can provide a professional and high-quality service.

“It took awhile, but building that confidence in the volunteers and the community has been big,” Williams said.

And while eager to avoid the spotlight, volunteers who have served with Williams for years recognized his dedication.

“It has taken everyone working as a team to make GVFD great, but Bob’s leadership has worked from the top down,” said Ben Weaver, who has volunteered with the department since August 2008. “Bob along with the Goose Valley fire board, current and past officers and all of our current and past firefighters are the ones to recognize for the development of the GVFD.

“I believe Bob’s overall goal of being the best fire department in Wyoming and possibly the U.S. was what motivated him to push everyone to their greatness,” Weaver continued. “That vision led Bob in dedicating a tremendous amount of hours to build GVFD and to keep it going. ... Bob knew it took a lot of time to be great, and he dedicated the time to make it successful.”

That dedication has offered an example to other firefighters who serve with GVFD and will mean the next chief will have big shoes to fill.

Allan Trumbull, another of the department’s first and long-serving volunteers, will serve as interim fire chief while the department’s board reviews applications for chief and assistant chief.

While Williams has set the stage well, the incoming chief will still have challenges to conquer. Williams said the department will need to replace all of its self-contained breathing apparatus (SCBA) equipment in the next two years, which will require a significant capital expenditure. In addition, Williams, Weaver and Husman all noted the ongoing difficulty of recruiting new volunteers.

Williams said over the years he’s met with a lot of prospective firefighters, but he doesn’t sugarcoat the time commitment.

“I’ve even had people slide the application form back across the table to me and say, ‘No, this isn’t for me,’” Williams recalled.

Recruitment of volunteer firefighters has been on the decline nationally since the 1980s, but finding new recruits has become particularly difficult in recent years.

After more than 12 years of service to Sheridan County, though, Williams looks forward to spending more time with his family and more time hunting and fishing in the Bighorn Mountains. And while he’s adamant he won’t regret hanging up his chief’s helmet, his love for the department, its mission and the people who comprise it likely won’t extinguish anytime soon.