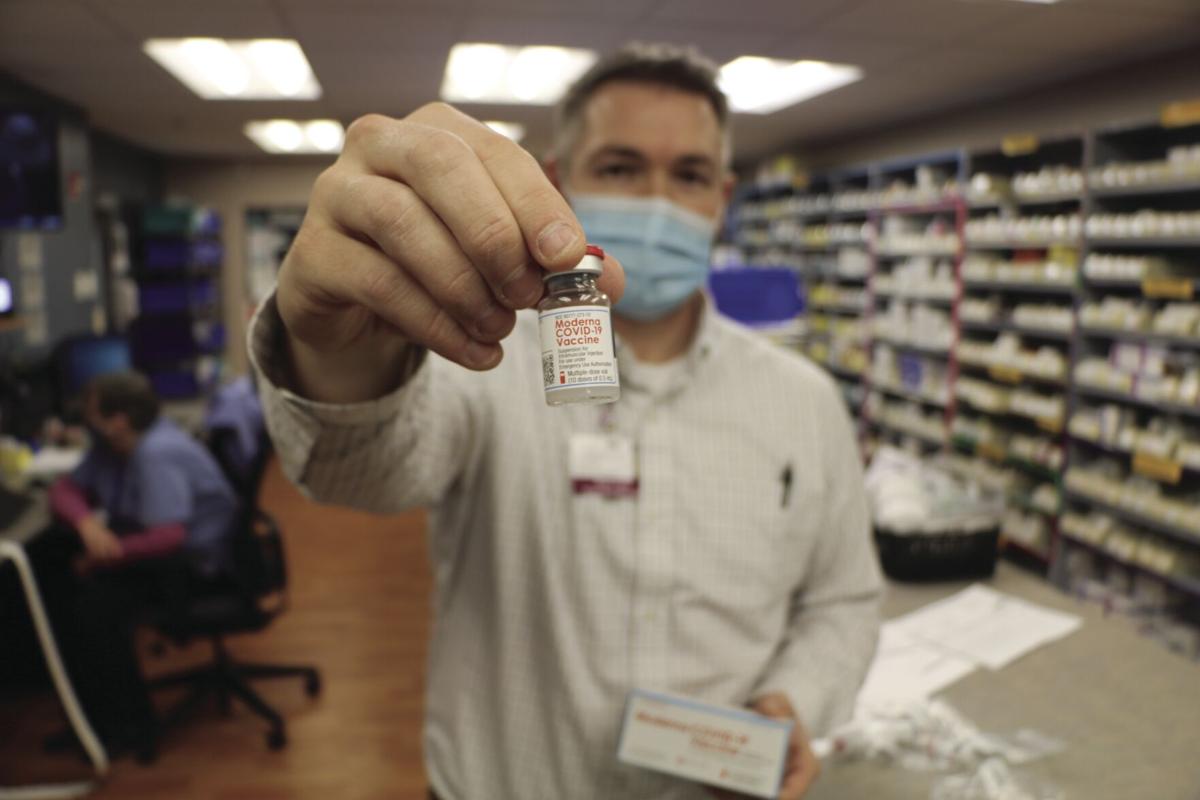 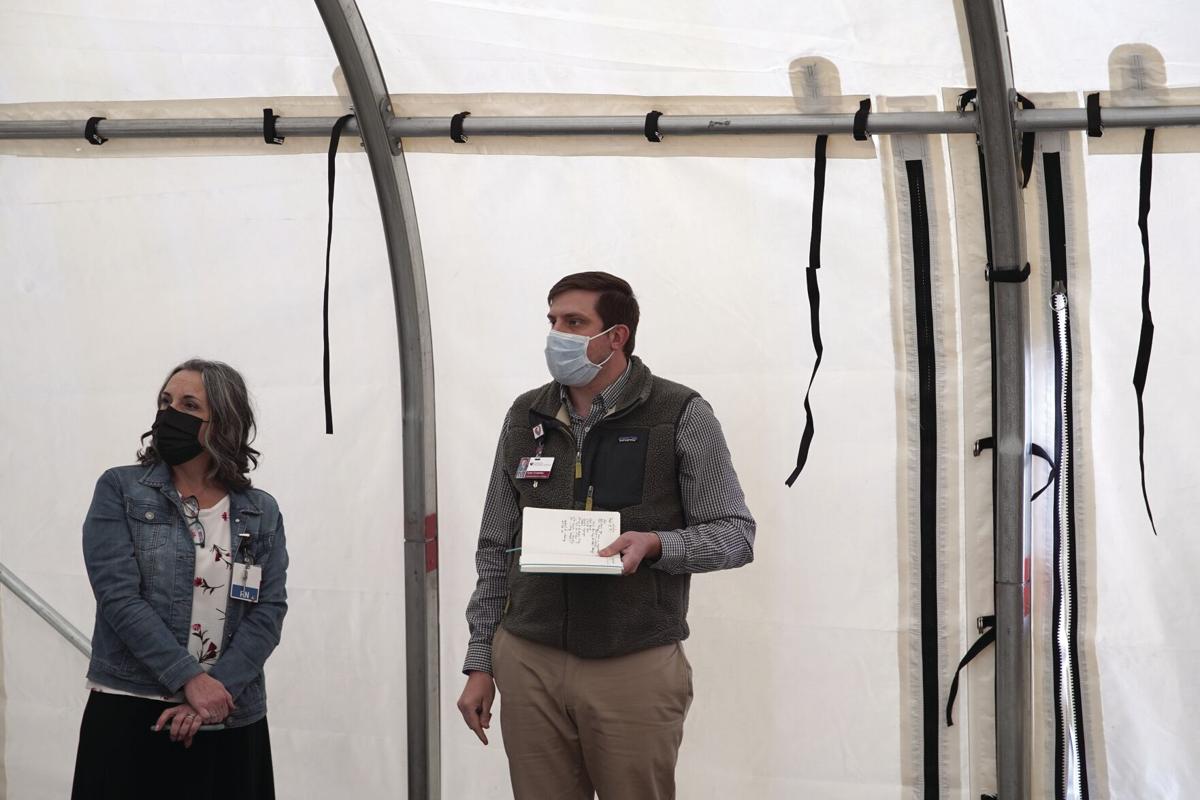 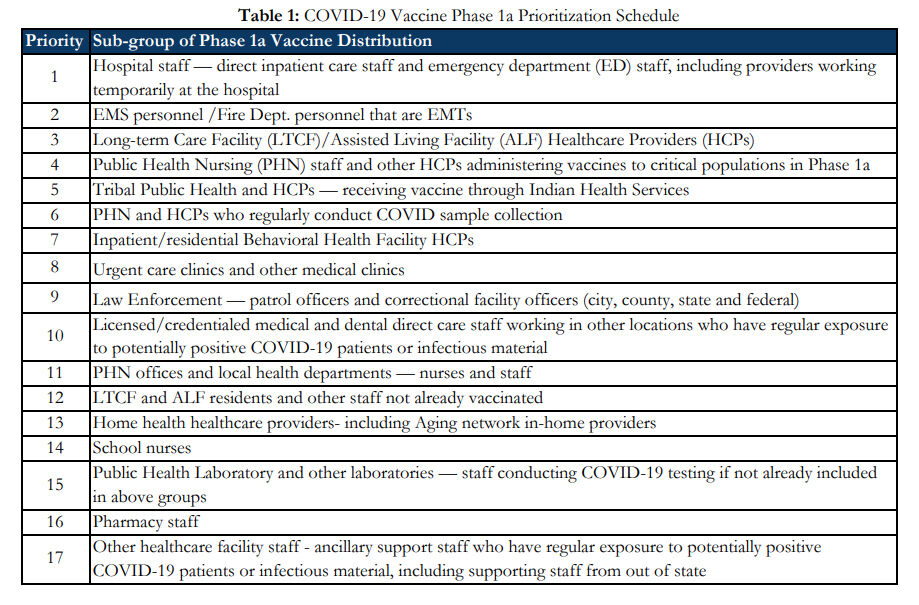 This graphic shows the Wyoming Department of Health’s preliminary list of prioritized populations for Phase 1a of the COVID-19 vaccine campaign. Phase 1a is when vaccines are in limited supply and are being allocated for administration to specific populations.

This graphic shows the Wyoming Department of Health’s preliminary list of prioritized populations for Phase 1a of the COVID-19 vaccine campaign. Phase 1a is when vaccines are in limited supply and are being allocated for administration to specific populations.

SHERIDAN — Between Sheridan County Public Health and Sheridan Memorial Hospital, administering the COVID-19 vaccine is scheduled out through the beginning of February. With a limited supply of vaccines from Moderna and Pfizer/BioNTech coming to the area, vaccines for the majority of Sheridanites are still months away.

Sheridan is allotted around 1,400 doses per month for the time being, Sheridan Memorial Hospital Chief Medical Officer John Addlesperger said, which doesn’t begin to cover the group identified as priority recipients through the state and the Centers for Disease Control and Prevention.

First priority people include health care workers and elderly in assisted living facilities. The next priority tier includes first responders and essential workers like grocery store staff and teachers. On Tuesday, health officials opened up phone lines to receive calls from the next set of people — those 70 and older — and fielded 200-300 calls per hour. Those calling in were put on a waiting list to receive the vaccine, which may be mid-year for some.

“We ran a report and identified 4,900 unique patients over the age of 70 in our community,” Addlesperger said. “Some of those are probably in nursing homes but essentially we have over 4,000 people. If you add in all those other essential care workers, we’re at least dealing with 5,000 people, if not more.”

Addlesperger said while all will not elect to receive the vaccine, the 1,400 monthly allotment of vaccines puts vaccinations for the most elderly in the Sheridan County area at least three months out. Vaccinations are scheduled through the beginning of February.

“We expect it’s going to take a couple of months before we can get from Phase 1B into Phase 1C,” Addlesperger said.

State health officials have not yet solidified people included in Phase 1C inoculation priority but will likely include elderly and those with compromising health conditions.

SMH plans to receive 975 Pfizer/BioNTech vaccines Jan. 28, which will help health officials move through inoculating people identified in the first phases. Almost the entire SMH staff has received their first round of vaccinations, and only one had more serious reactions to the vaccine, including fever, chills and regular flu-like symptoms. Nobody has needed medical care following a vaccination at this time, and any symptoms usually cease in a patient between 12 and 24 hours after receiving the vaccine.

Testing availability for those identifying COVID-19 symptoms has increased to SMH providing rapid PCR testing. PCR testing is the most accurate form of COVID-19 testing, according to top health officials, and usually took at least five days for results to return to a patient. Now, it only takes up to two hours to receive test results back from a rapid PCR test. Other testing options, including antigen testing — which SMH health officials accept as accurate only if one tests positive and will continue with a PCR test if an antigen test returns negative — and a new drive-thru COVID-19 testing facility under a tent.

Most of the region saw a strong decline in COVID-19 positive cases before the holiday season but has since seen a bump following holiday festivities. Addlesperger said the bump has not affected hospitalizations, which remain at three or four daily, but they are waiting to see if the bump will increase or shrink back to pre-holiday numbers.

Sheridan County recorded 2,111 total lab-confirmed cases since COVID-19 reached the county in March 2020. Of those, 62 were active, 2,032 were recovered and 17 were recorded deaths. Of the 475 probable cases over time, 37 are active. Four people were hospitalized Wednesday.