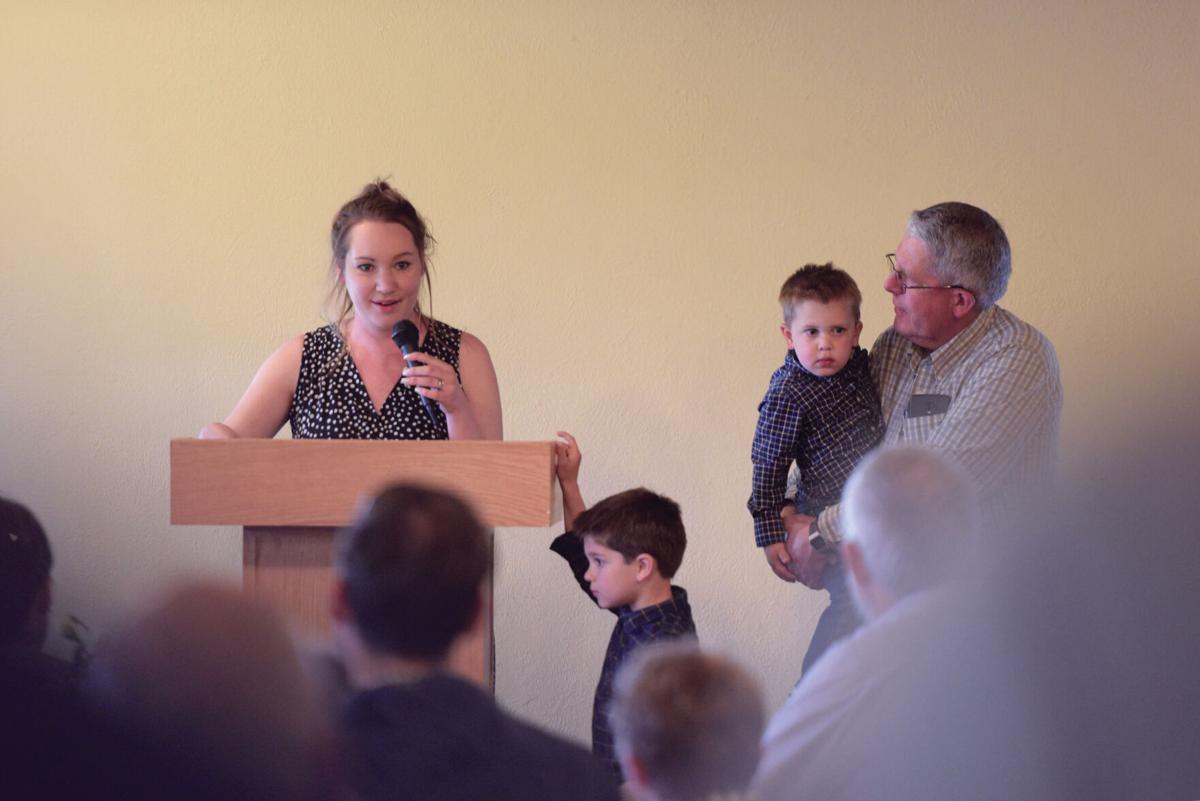 Megan Gresham reads a speech about her late husband, Dennis Gresham, during a tribute for the 33-year-old man at the Historic Sheridan Inn Thursday, April 29, 2021. Her sons, Calvin, middle, and Malcolm, right, stand by in support. Megan described Dennis, who died April 23, as pure and "always there." 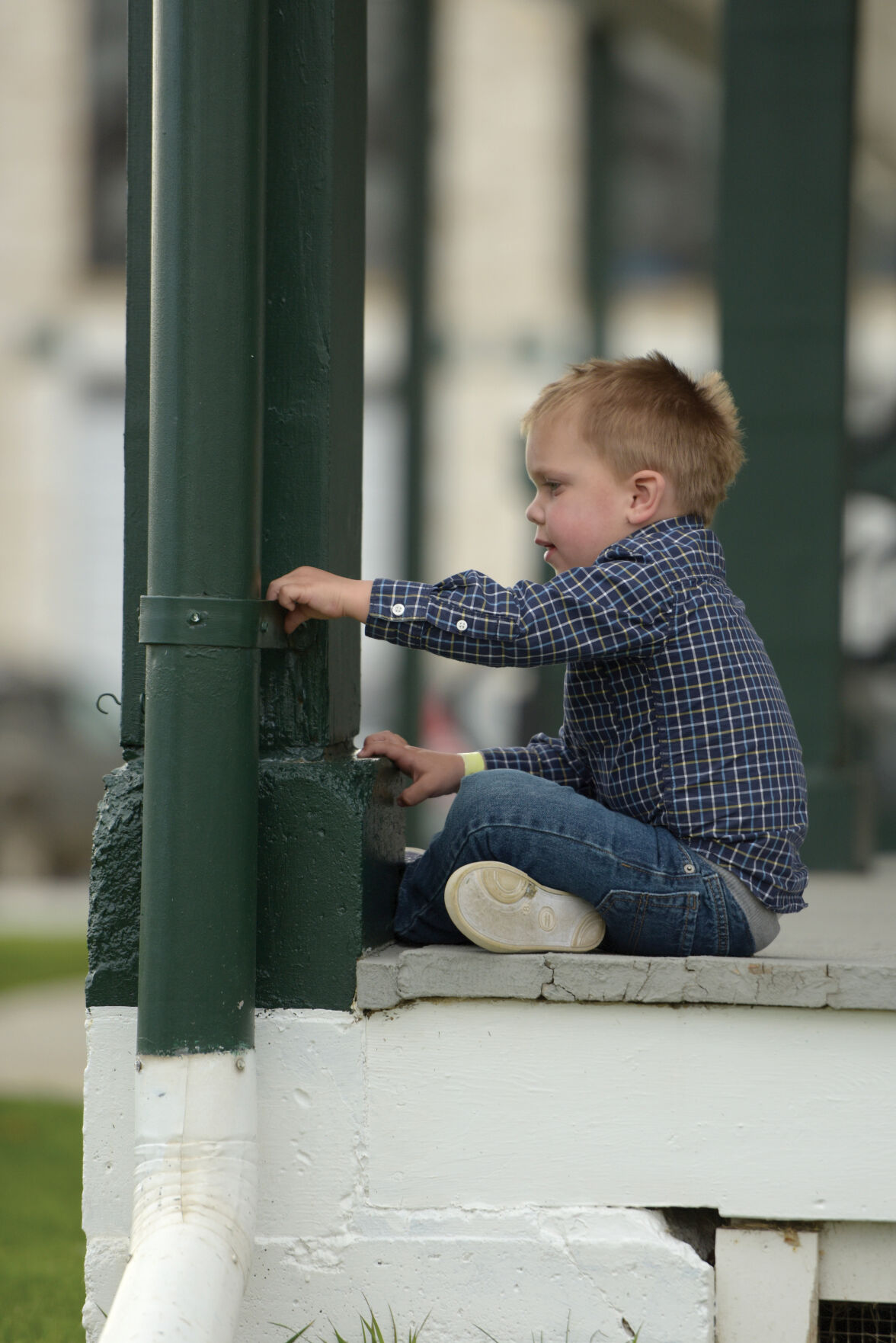 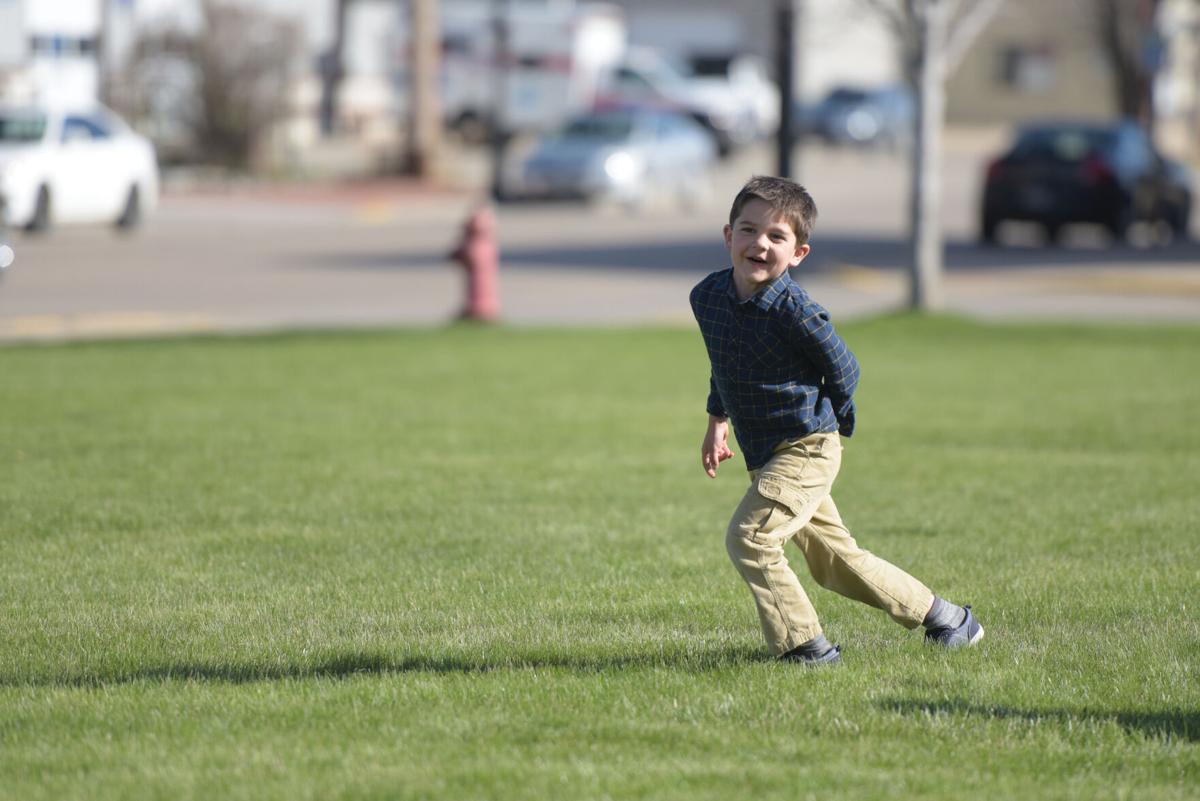 Calvin Gresham, 5, plays football with friends on the lawn of the Historic Sheridan Inn before a tribute to his father, Dennis Gresham, Thursday, April 29, 2021. Dennis died April 23. 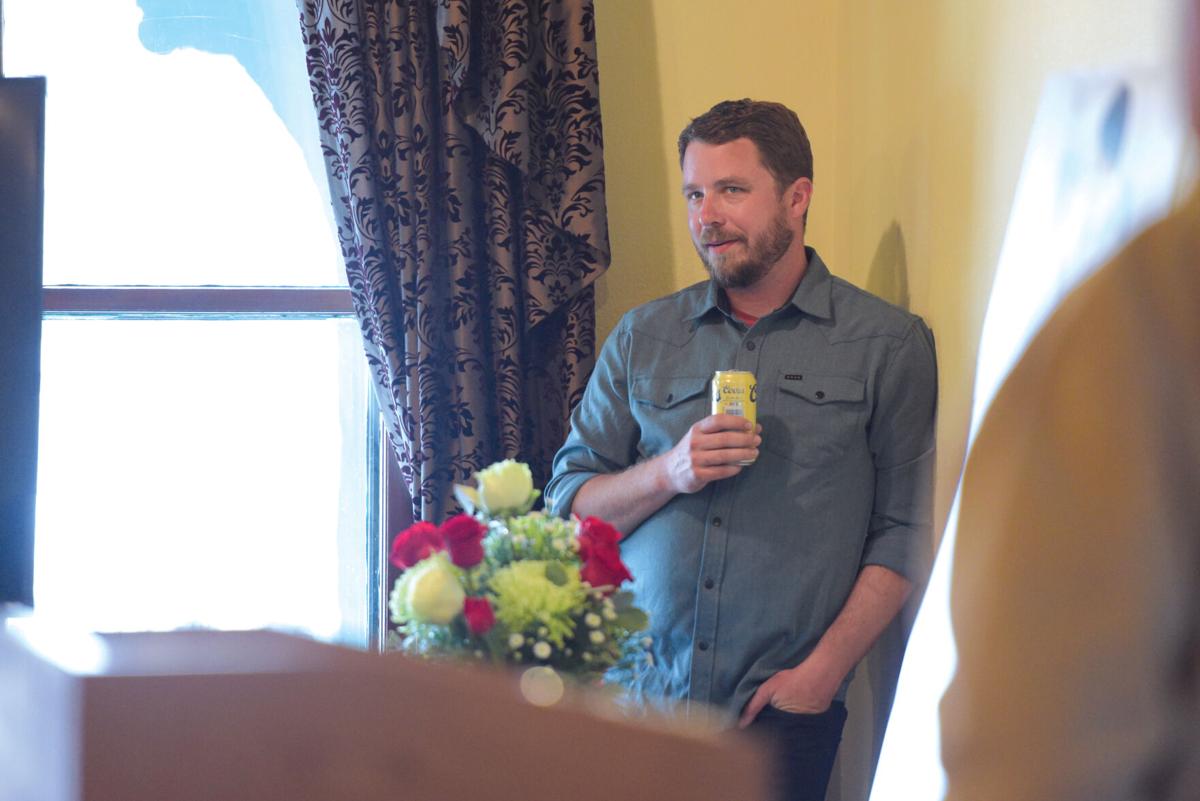 Dennis Gresham's lifelong friend, Brenden Anders, turns on a video of his late friend performing in a band for a crowd of around 100 people gathered Thursday, April 29, 2021, in tribute to the man who was murdered April 23. 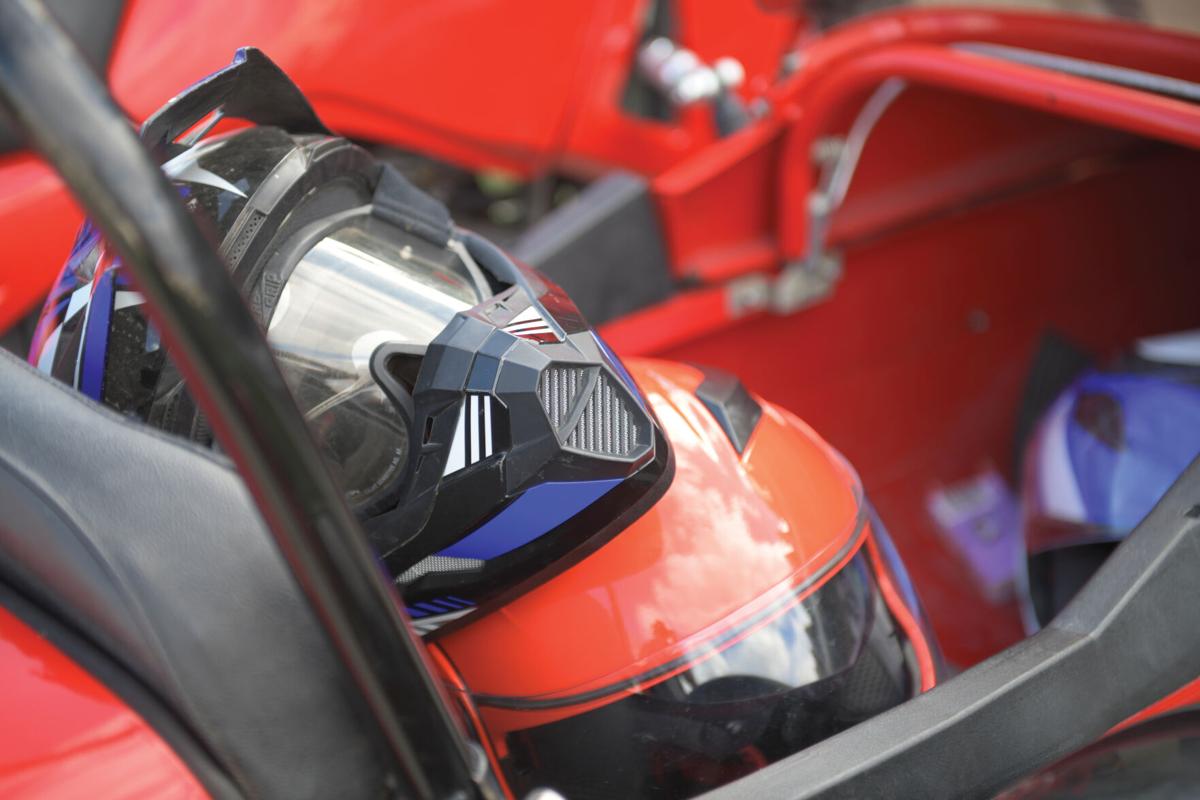 The Gresham boys' helmets lie in the side car of their late father's motorcycle, which they rode from a funeral to a tribute at the Historic Sheridan Inn Thursday, April 29, 2021. 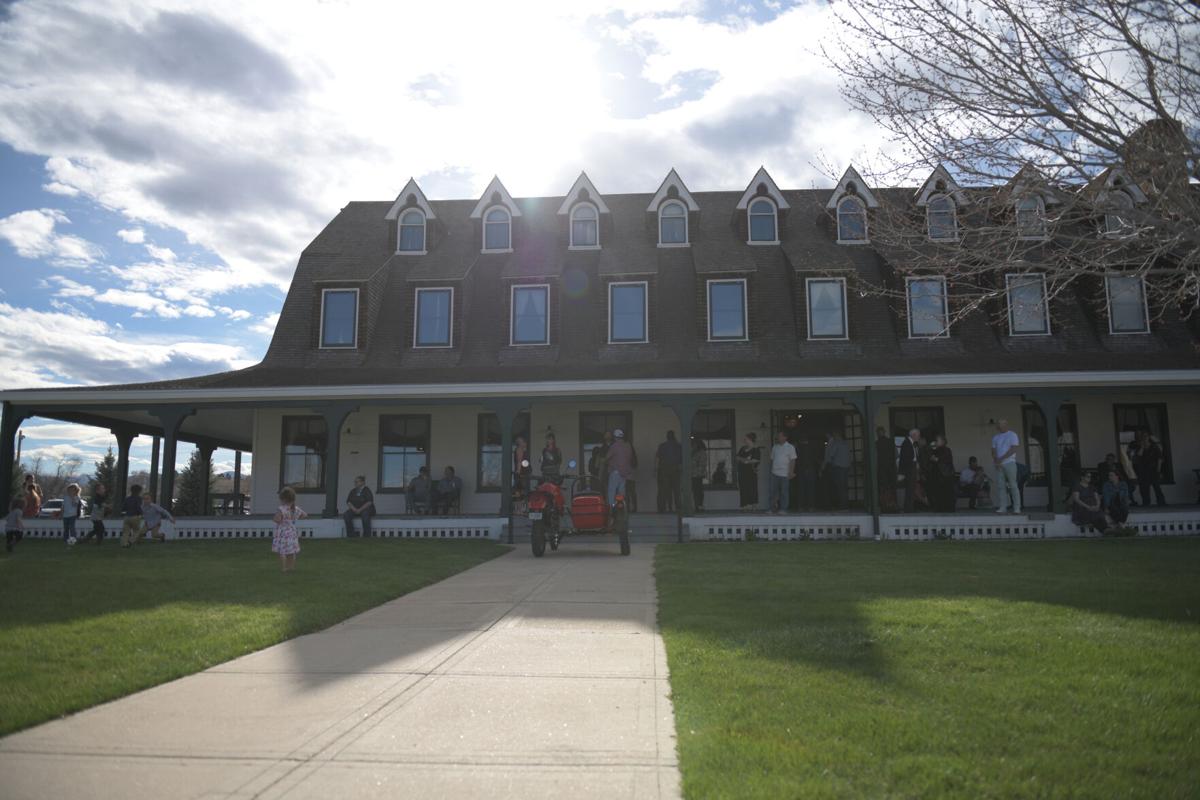 Folks attending a tribute for Dennis Gresham Thursday, April 29, 2021, chat with friends on the porch of the Historic Sheridan Inn while children play on the grass. 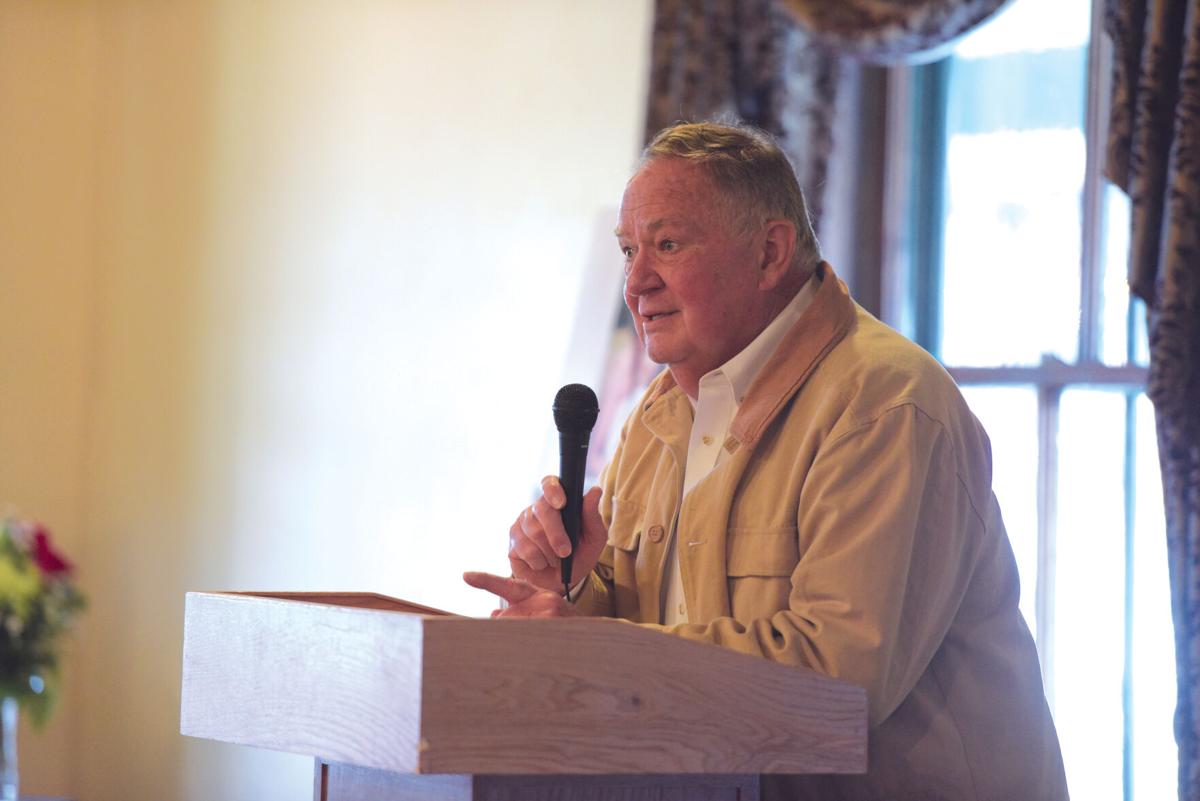 John Tucker, "adopted grandfather" of the Gresham family, opens a tribute for Dennis Gresham at the Historic Sheridan Inn Thursday, April 29, 2021. More than 100 people showed up to celebrate the 33-year-old man who died last week.

Megan Gresham reads a speech about her late husband, Dennis Gresham, during a tribute for the 33-year-old man at the Historic Sheridan Inn Thursday, April 29, 2021. Her sons, Calvin, middle, and Malcolm, right, stand by in support. Megan described Dennis, who died April 23, as pure and "always there."

SHERIDAN — Walking up to the Historic Sheridan Inn Thursday, attendees greeted children playing catch on the green grass of the well-known facility. The children laughed and called out each other’s names before sprinting to catch a football bouncing on the ground after a missed attempt, the young Gresham boys — Calvin and Malcom — leading the charge.

The joy spread to the adults watching closely to ensure a ball didn’t roll accidentally into busy Broadway Street.

Young children and friends nearby helped ease the tension of a tragedy that brought more than 100 people together Thursday evening for a tribute to Dennis “Denny” Andrew Gresham.

But that tragedy — a murder in Billings, Montana, April 23 — is not one Gresham’s wife, Megan Kendrick Gresham, wants everyone to remember. Instead, she said, she wants people to remember her husband, her children’s father, and all of his relationships.

“That bike’s got a lot of memories,” one attendee said to a group of the Greshams’ friends, nodding to the bright red motorcycle sitting in front of the building with an attached sidecar that served as the vehicle used to transport the Gresham boys to the tribute. Brenden Anders, a lifelong friend who Denny Gresham had traveled to Billings to pick up from the airport April 23, escorted the boys with his buddy’s ride.

From bikers to homebrewers to entrepreneurs, the friends surrounding the Greshams this past week show the impact the 33-year-old man had on others’ lives.

“The friend network we have is so diverse,” Megan Gresham said. “Denny touched a lot of people in town.”

The impact of the loss fell heavily on young friends who stood in shock, unaccustomed to funerals, some with deadpan emotionless faces and others shedding quiet tears.

“This was probably my second funeral that I’ve been to,” Megan Gresham told The Sheridan Press Friday morning. “I haven’t lost too many people.”

She said Calvin, 5, knows the impact of the loss of his father. She had explained the graveside service as the time to “say goodbye to daddy,” and Gresham said Calvin understood the permanence of the casket lowering into the ground, as he cried while bagpipes played “Amazing Grace.”

Malcolm, 2, spent a moment alone inspecting a pillar of the Sheridan Inn front porch Thursday following his mother’s speech and between bouts of blowing bubbles into the light breeze on the front lawn.

While the grieving process will continue, Gresham said she remains grateful for the village surrounding her.

“I hate the circumstance, but at the same time, looking out at the crowd and all the diverse group of people that cared about Denny and us is overwhelming,” she said.

She also thanked local law enforcement officers and advocates from the Advocacy and Resource Center for walking by her side as she completed normal activities around her property while answering abnormal questions about the time surrounding the event of her husband’s death.

The Greshams’ “adopted grandfather” John Tucker — who, with his brother, moved Vacutech to Sheridan from Colorado years ago with Denny moving with them — implored those in attendance to help raise the boys to be like their father — a strong, steady man who was always there when anyone needed him.

“This family belongs to us, right Sheridan?” Tucker said, with resounding ‘“yes” responses coming from the crowd. “...This is a Sheridan family, and I want to make sure these boys are protected and watched after and cared for.”

Megan Gresham has focused her outlook on a phrase taken from her husband when the two were in the middle of nowhere dealing with mechanical issues on their motorcycle. In response to the setback, Denny Gresham said, “It is what it is.”

While there is no changing what happened to her husband, with help from the community, Megan Gresham hopes to raise her boys while remembering the man she wants that instruction to emulate: Dennis Gresham.