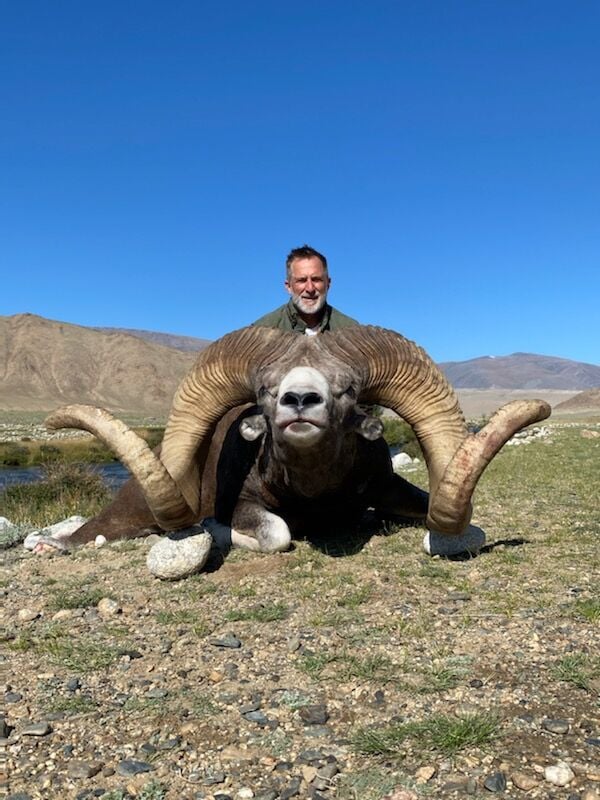 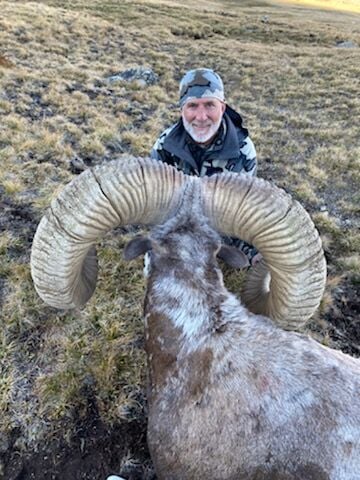 SHERIDAN — The hunting party watched for days as the High Altai Argali ram traversed the rocky terrain of the high country on the far western border of Mongolia.

He was big, but how big, even the guides couldn’t tell.

“We were lucky to find this ram right away,” Sheridan area veterinarian Mike Pilch said of his recent hunting trip to Mongolia.

“We watched him for a couple days, but we didn’t understand how big he was until we walked up to him on the ground after we made the shot,” he said. “He is deceiving both in the size of his body and his horns. The size of his head and body made his horns look smaller.”

As it turns out, the ram may be a world record breaker.

“They measure the curls, and right now as it stands, he is the potential new world record,” Pilch said. “The current world record is 263 total inches of horn measurements, and he is 263 ½ inches.”

For Pilch, who grew up hunting in the Bighorn Mountains, this hunt was a culmination of a lifelong love. He’s a third generation Sheridan native, and his parents ran a lodge on the mountain back in the day. That is where he got the hunting bug, he said.

“I had a close relationship with my parents, who taught me how to hunt and fish. My first hunt was with my father, and it was a great moment,” Pilch said. “I still remember it.”

In Wyoming, wild sheep were recognized as a big game trophy animal in the 1960s or ‘70s. His father, as his hunting mentor, introduced him to the species.

There are four species in North America. If you harvest one of each, you can claim a “North American Grand Slam,” which includes the Dall sheep, mostly found in Alaska; the Stone sheep, mostly in the Yukon or British Columbia; the Bighorn sheep which locals know; and a Desert Bighorn closer to Mexico. There are around 50 bighorn sheep species in the world, across all the highest mountains of the world. A “World Slam” means harvesting 12 of those 50-some species. A World Super 20 Slam is next, followed by a Super 30 and Super 40.

“To give you some perspective, there have only been eight people in the world to ever record a Super 40, and about 30 that have recorded a Super 30,” Pilch explained. “I just completed my World Slam, which is 12 or more.  My next level is Super 20, but the Super 40 is the ultimate I’m shooting for.”

Pilch has been on several international hunts, from Russia to Azerbaijan and Mongolia. When he visits a new place, he studies the culture before heading out to the remote areas where the hunting takes place.

“When I go on these trips, I study the history, and spend two or three days in the main city going to museums, which is fascinating,” he said. “It is about having an appreciation for the culture, the environment and the people in the area.”

As he’s traveled, he’s seen a shift in international hunting. Many rural places suffer from overgrazing, or even disease, when livestock like domesticated sheep mix with native wild animals. In Mongolia near China and Kazakhstan, disease has not been an issue, but overgrazing has. On their hunts, Pilch said the guides and tourists try to promote hunting as a conservation model.

“There is a lot of history of corruption and poaching, and I have seen that shift,” he said. “There are conservation efforts going on now in these places, so you go out in the middle of nowhere, Western Mongolia, and you meet with the nomadic people who have been there a thousand years.

“They have domesticated sheep that are raised in and amongst the wild animals, and there is overgrazing,” he said. “But you can work with the local people to (implement programs and incentives) to not graze around wild animals. Seeing these areas 20 years ago and now, it is beginning to work.”

Getting to some of the most remote places on Earth is a challenge, though, and Pilch’s trip was initially scheduled for 2020.

“The High Altai is the biggest, kind of the holy grail of all sheep, and to get there is a logistical challenge because it is so remote,” he said. “I have always dreamed of this hunt.”

He worked with a well-respected tour guide out of Turkey named Kaan Karakaya, and planned the trip for two years. The first attempt was canceled due to COVID-19, but around July of this year, Karakaya told Pilch there was a way.

“Long story short, we arrived through Istanbul on Aug. 20,” Pilch said. “And then we had to get to Ulaanbaatar, which is the largest city in Mongolia. There are 3 million people in Mongolia and 1.5 million live in Ulaanbaatar. The rest of the country is remote and sparsely populated.”

The party managed to catch a flight to Western Mongolia, saving itself hunting time by skipping a days-long drive across the country.

“We went after the ram right off the bat. I planned about six weeks, but we were lucky to find him right away,” Pilch said. “I pulled the shot, got the ram and long story short, we packed him out on horses.”

Even the guide was excited about his size.

“That next morning, Kaan came in at about 6 a.m. and said he couldn’t sleep. ‘We have to measure this ram,’ he said,” Pilch recalled.

As a veterinarian, Pilch said he is often asked how he balances a career caring for animals with also being a hunter.

Pilch said even after harvesting countless animals and 18 sheep, he still gets emotional.

“Coming up on such a great animal that you harvested, I tend to get emotional. Even after 18 sheep, and even at 40 if I ever reach that, I reflect a lot,” he said. “The hunt is a culmination of a lot of things, including the people who helped you get there. There is a lot of culture around the harvesting of animals. For me, it is a total appreciation of the animal.”

While hunters are not allowed to bring meat back on international hunts, the animal usually goes to the local people.

“Watching people come in and save everything — they even take plastic water bottles and save the blood to use for sustenance — I just sat back and watched these guys who were so meticulous and honorable. They utilize all of the animal like they have for 1,000 years,” he said.

Which, he said, comes down to respect.

“Whether you hunt a single pheasant and that is your only hunt in your life, or you go to far off places, it is about educating yourself,” he said. “If you are in Sheridan on a pheasant hunt, it is not just about the fun … Maybe learn how the pheasants are doing in Sheridan County. How have they been historically? Are there problems and how can I help?

“All that comes from the core of truly appreciating the experience you are on,” he said.