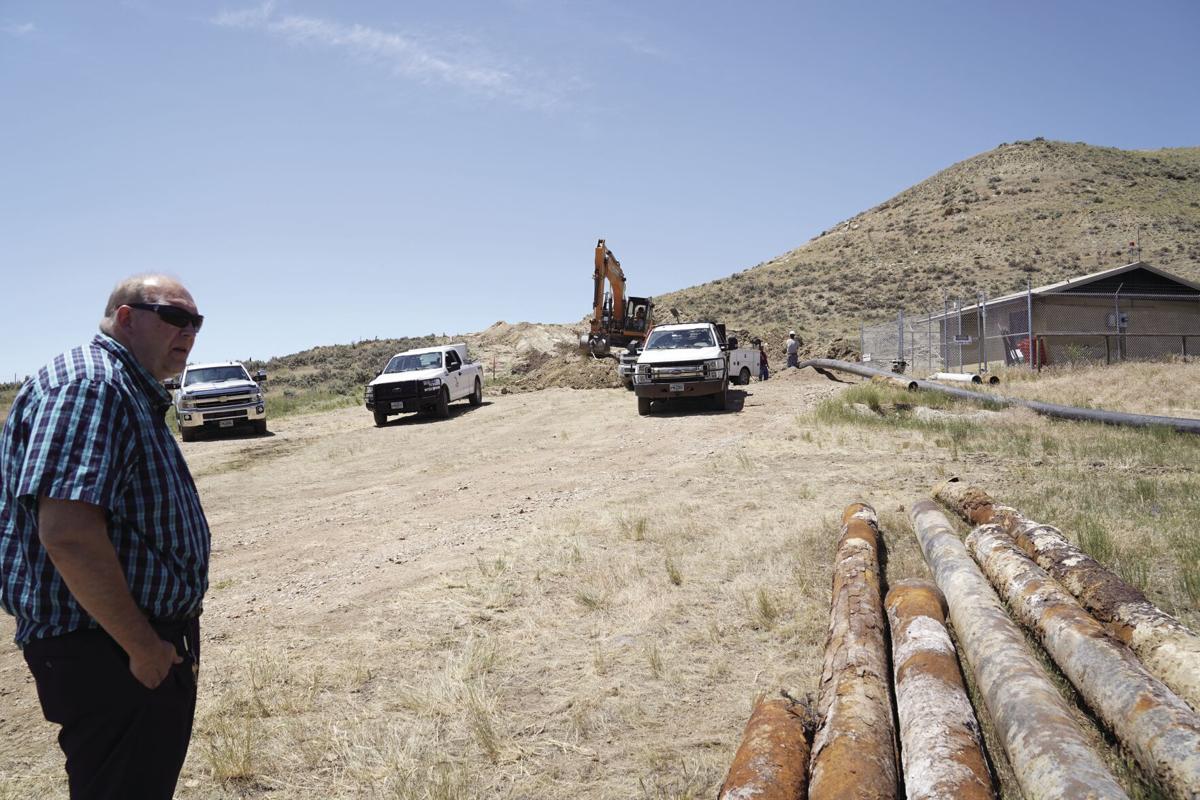 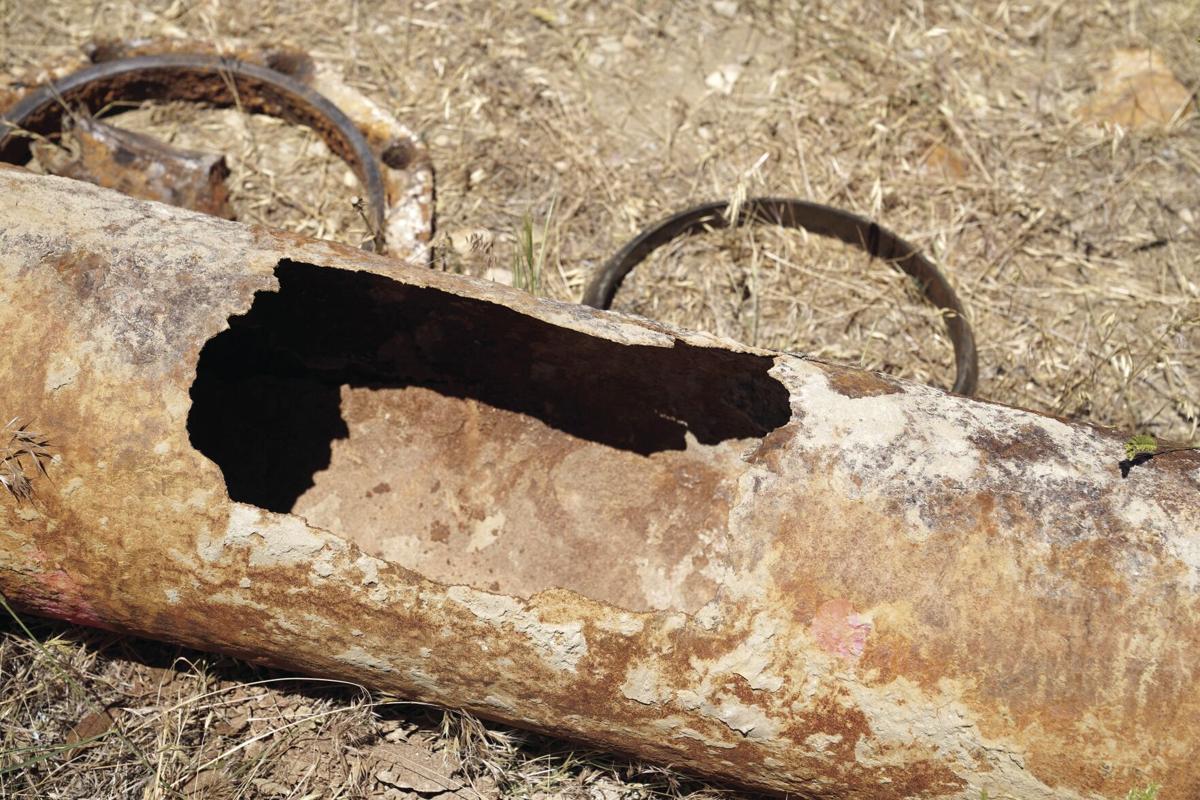 Old age and rust were determined to be the cause of the water main break in the town of Clearmont Tuesday, June 22, 2021. 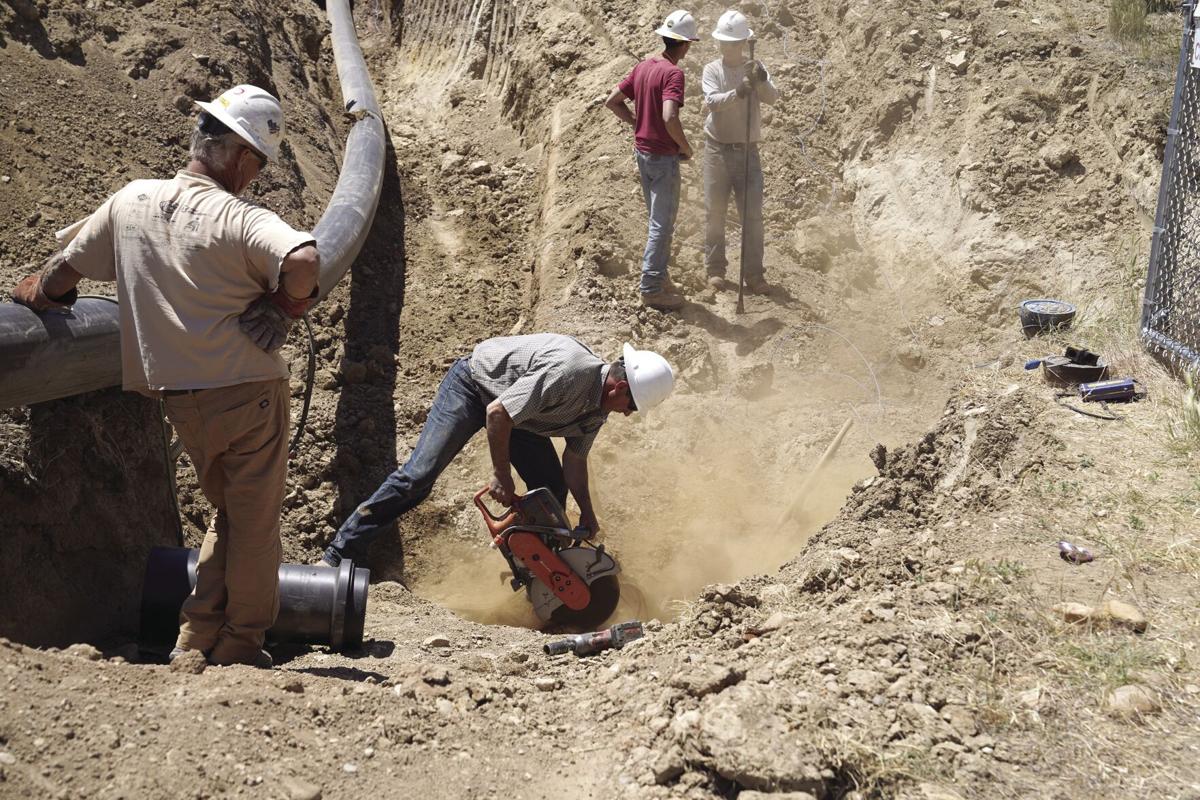 A crew from WyoDak Energy Services LLC works to cut out and replace the 8-inch water main that feeds the town of Clearmont's water tower Tuesday, June 22, 2021.

Old age and rust were determined to be the cause of the water main break in the town of Clearmont Tuesday, June 22, 2021.

A crew from WyoDak Energy Services LLC works to cut out and replace the 8-inch water main that feeds the town of Clearmont's water tower Tuesday, June 22, 2021.

CLEARMONT — The town of Clearmont expects to have hundreds of feet of water pipeline replaced by the end of the week, nearly three weeks after a water main first burst in town.

“Our hope is that we can be wrapped up by the end of the week,” Mayor Greg Rohrer said. “I think things have been going pretty smoothly overall. It certainly could have been a lot worse.”

Water has continued to be distributed to citizens throughout the breakage, according to Rohrer. While water in the tank could not be replenished, water could still be distributed to the town. The town asked citizens to use water for emergency purposes only. So while local lawns dried up, citizens were able to continue flushing their toilets, washing their laundry and dishes, and drinking water.

On June 3, a transmission main delivering water from the groundwater wells to the town’s water tank sustained a catastrophic blowout. That section of main was quickly replaced, but as staff repressurized the system, a second blowout occurred in a different section of the same pipe.

Rohrer attributed the blowouts to the age of the ductile iron pipe, which was installed in 1978, and to corrosion.

The town’s second water main, which delivers water from the tank to the town, remained operational, according to Rohrer. However, since that main was the same age and had experienced similar corrosion as the other main, the town was concerned about the pipe’s long-term sustainability.

Unfortunately, the town had no way to fund the main replacement project, which was estimated at $291,380 June 4, according to Rohrer. The town had some unspent capital facilities tax monies earmarked for other purposes, but these funds were insufficient to replace the transmission mains, Rohrer said.

Sen. Dave Kinskey, R-Sheridan, said this situation was not uncommon for rural Wyoming towns like Clearmont, so he was unsurprised when he received a call asking for legislative intervention on the town’s behalf.

“A little town like Clearmont is in danger of running out of resources awfully quickly,” Kinskey said. “Cities like Casper, Cheyenne and Rock Springs have millions in reserves if things go awry, but for little towns like Clearmont, a bad month or even a bad week could be disastrous. That’s why there’s a specific provision in state statute for emergency meetings of the State Loan and Investment Board.”

Kinskey, along with Reps. Barry Crago, R-Buffalo, and Mark Jennings, R-Sheridan, wrote a letter to the SLIB Board — comprised of Gov. Mark Gordon, Secretary of State Ed Buchanan, Auditor Kristi Racines, Treasurer Curt Meier and Superintendent of Public Instruction Jillian Balow — to ask for an emergency meeting to consider the distribution of an Emergency Mineral Royalty Grant to the town. These grants exist specifically for emergency situations like those experienced by Clearmont, Kinskey said. Currently, the state has $6.67 million set aside for emergency grants.

“I was originally told that, if they had the application done by June 15, the funding could be considered on Aug. 15,” Kinskey said. “And I let the staff know the town really didn’t have that kind of time to work with. They were going to run out of water before then.”

Instead, the SLIB board met for an emergency meeting June 10 — just a week after the first main break. The town originally requested $300,000, but was awarded $450,000. State analysis of the project found the original $291,380 estimate of the project was likely significantly lower than the actual cost of the project, due to a 270% cost increase for ductile iron pipe linked to the COVID-19 pandemic, which has dramatically limited production of pipe.

Kinskey said he was pleased with how quickly the SLIB was able to transfer emergency dollars to the town.

“They had their first break on a Thursday and the next break on Friday,” Kinskey said. “They began their application on Monday, finished it on Tuesday and were granted $450,000 two days later. For government, that’s pretty darn fast.”

Rohrer said he was happy with the project’s progress in the last few weeks and he appreciated the patience of Clearmont citizens as the new main was installed.

“It’s an important and necessary project, and we appreciate the SLIB Board coming alongside us and supporting us,” Rohrer said.