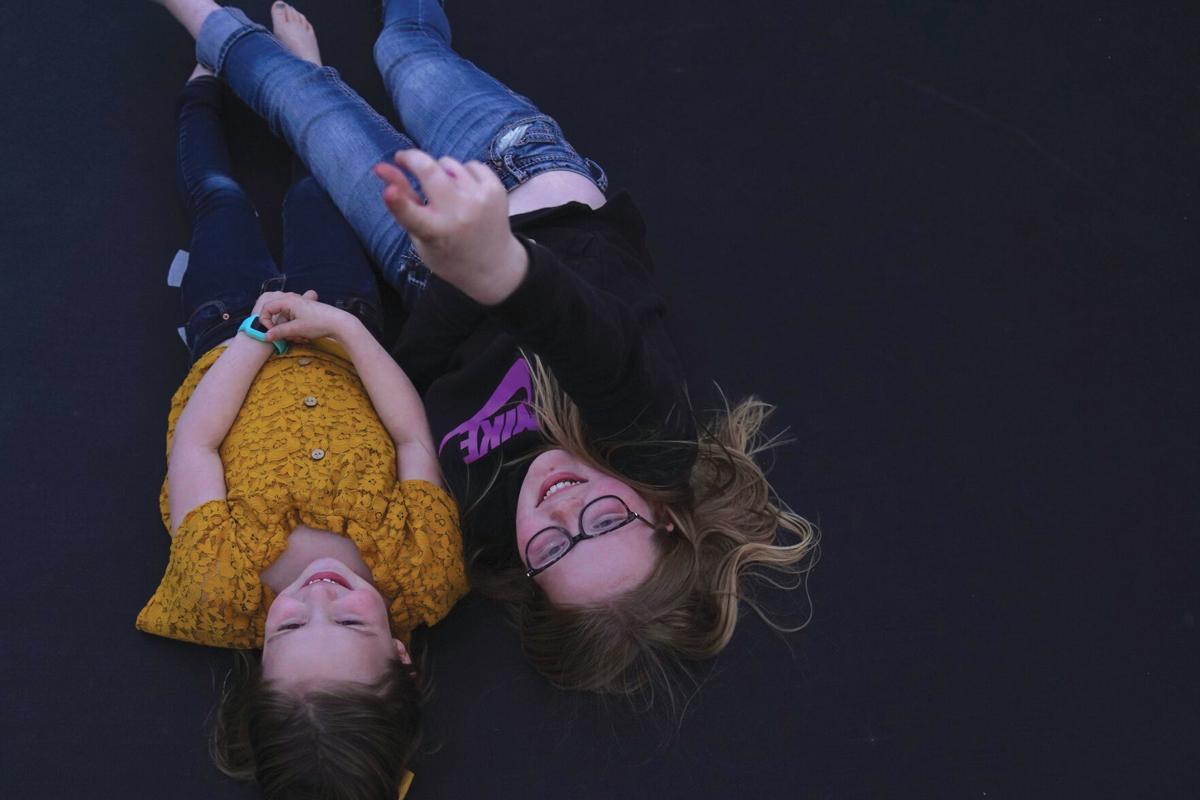 Ten-year-old Addison Cassiday, right, points out the moon in the early evening sky to her little sister Delilah Cassiday, 6, Friday, April 1, 2021. Addison is a semifinalist in a NASA essay contest. 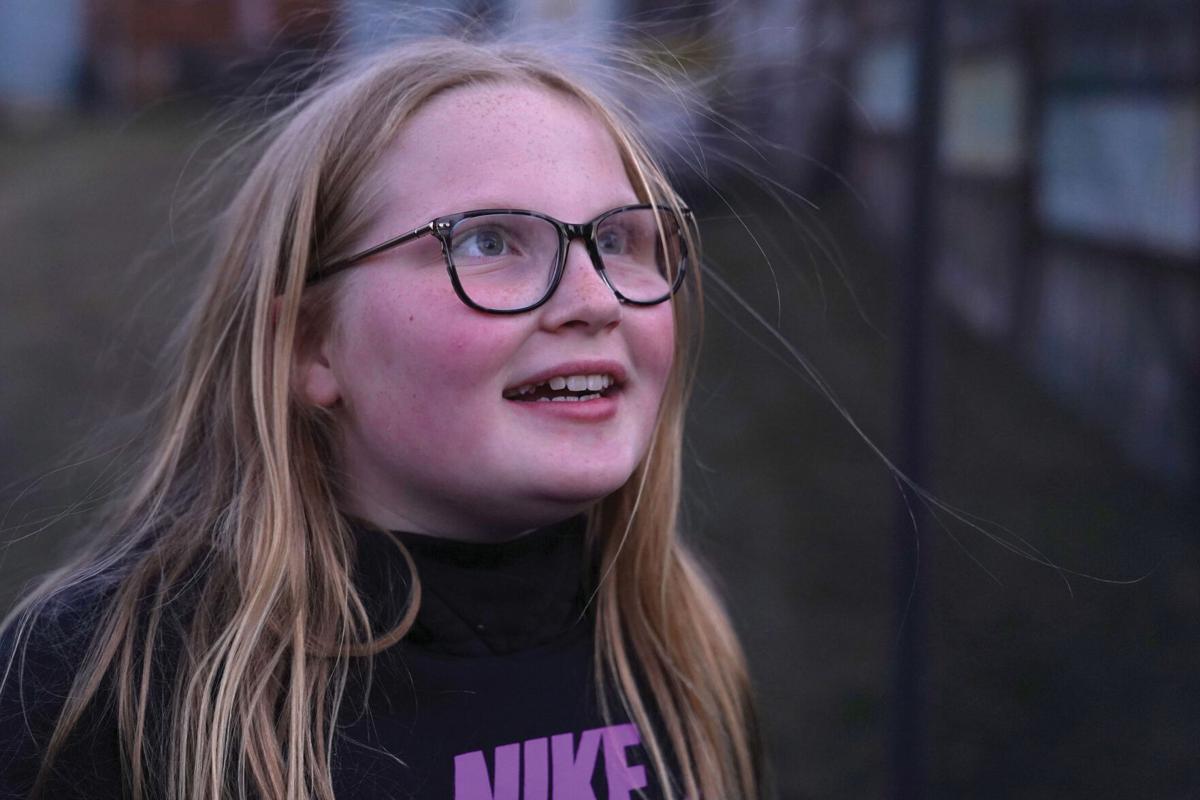 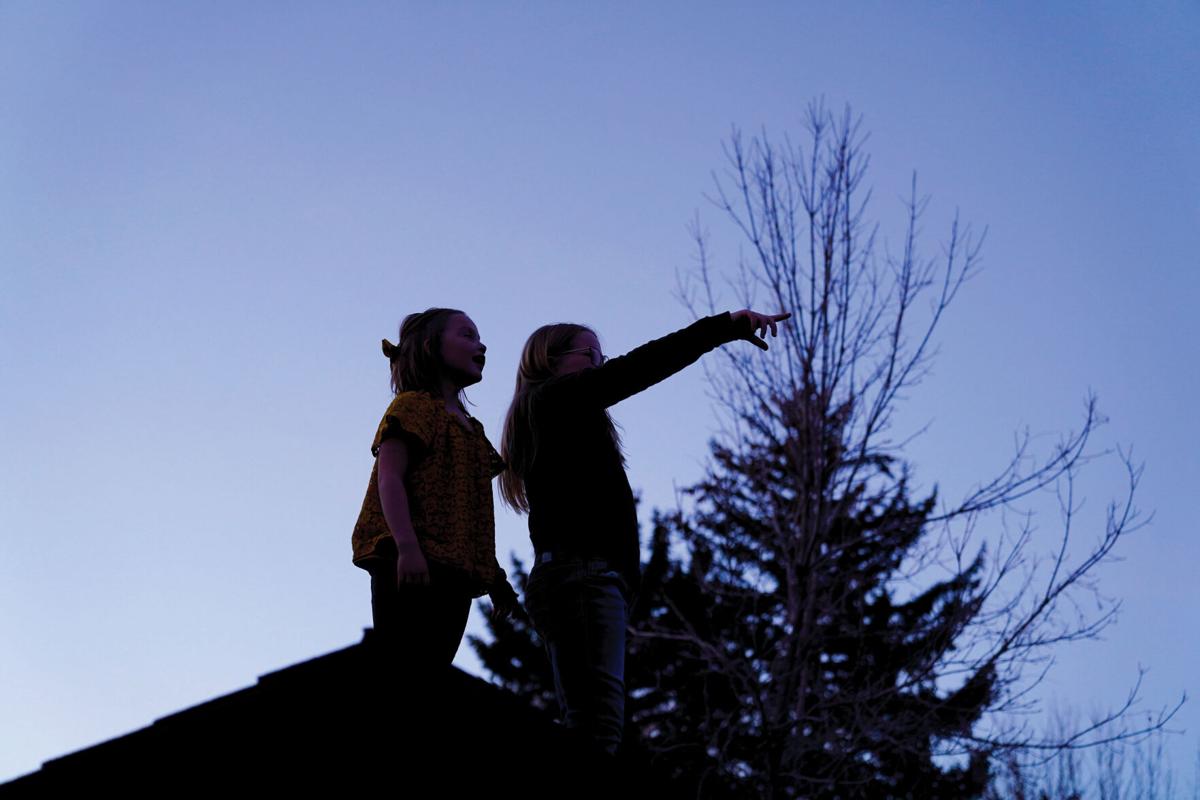 Addison Cassiday, 10, and her younger sister Delilah, 6, climb onto the roof of a shed in their backyard to get a better view of the night sky Friday, April 1, 2021.

Ten-year-old Addison Cassiday, right, points out the moon in the early evening sky to her little sister Delilah Cassiday, 6, Friday, April 1, 2021. Addison is a semifinalist in a NASA essay contest.

Addison Cassiday, 10, and her younger sister Delilah, 6, climb onto the roof of a shed in their backyard to get a better view of the night sky Friday, April 1, 2021.

So it was for the Cassiday family on one six-hour and 425-mile trip this fall. With a captive audience in the car, mom Liz sought ways to keep her daughters entertained and their minds stimulated. So they started planning out another, much longer trip: a 238,900 mile trip to the moon’s South Pole.

Fourth-grader Addison admitted she never thought much about the moon before that road trip. She had learned about NASA in school but only briefly. But the road-trip questions sparked her imagination and an interest she didn’t even know she had. And a visit to the NASA website further stoked her passion as she read countless articles about the first trip to the moon and robots and decades of research.

“I learned a lot more reading the articles and stuff,” Addison said. “It was a lot more fun when I knew more about it.”

At the urging of her mother, Addison put her plans into writing as part of the Artemis Moon Pod Essay Contest, a national writing competition sponsored by Future Engineers and NASA asking K-12 students to imagine leading an expedition to the moon’s South Pole.

After the submission and review of more than 14,000 essays from across the country, the organizations selected 155 semifinalists for the competition last month. Addison was selected as one of three semifinalists from Wyoming.

“It’s really exciting,” Addison said. “But I’m just a fourth-grader. It’s not like I’m a superstar.”

The essay contest was offered in collaboration with NASA’s Artemis Program. Using innovative technologies to explore more of the lunar surface than ever before, the Artemis Program will use what is learned on and around the Moon to eventually send astronauts to Mars.

For her essay, Addison imagined her dream team of astronauts. She settled on seven people who would be cross-trained to fill various roles including pilot, engineer and navigator. Addison would serve as the mission’s commander-in-chief — and also the first woman to set foot on the moon.

The essay prompt also asked Addison to choose a piece of high-tech equipment to bring along on the mission. She eventually settled on solar panels after a conversation with her mom.

“I was originally going to bring a digital clock, but mom said that wasn’t high-tech enough,” Addison said.

Addison said she wrote the essay in a single afternoon, though there were some challenges. She struggled with some terminology, for example, and had to refer back to NASA’s website for suggestions. She also struggled with the contest’s word limit of 100 words, but ultimately snuck in at 99 words.

“I would write too much and would have to go back and take out some stuff,” Addison said.

The contest semifinalists were announced March 23 as part of a NASA virtual event in which contest participants had a chance to learn more about space exploration from speakers including NASA Astronaut Ricky Arnold; Kathy Lueders, the Associate Administrator of NASA’s Human Exploration and Operations Mission Directorate; and Mike Kincaid, Associate Administrator of NASA’s Office of STEM Engagement.

Arnold’s presentation, in particular, taught Addison something she never knew about space exploration.

“He was telling us about his first trip, and how he needed to be carried out of the spaceship when he got home,” Addison said. “And I was like, ‘Why did he have to be carried out?’ So I did some research and found out their muscles aren’t worked as much as when they’re walking on earth so they lose that strength.”

As a semifinalist, Addison will receive an “Artemis Prize Pack” filled with space-themed prizes and will also attend a series of virtual sessions with NASA experts. On April 7, the contestants will be narrowed down to nine national finalists, who will be interviewed about their essays. In May, the contest’s grand prize winners, who will win a family trip to attend the launch of NASA’s Artemis 1, will be announced.

Regardless of where things go from here, Addison will always be a part of NASA history: NASA will fly digital copies of all 14,000 essays around the moon aboard Artemis I.

Liz said she was proud of her daughter’s performance in the contest so far and was grateful the competition had exposed her daughter to a potential career she might not have known about otherwise.

“Addison wrote in her essay about being a leader as the first woman on the moon, and I think contests like this are great because they allow you to start imagining yourself in these roles,” Liz said. “It is fun when kids start imagining themselves in careers that they wouldn’t necessarily be exposed to in Sheridan, Wyoming.”

As for Addison, the sky truly is the limit right now — both for her and her essay.

“When they announced I was a semifinalist, I was so excited,” Addison said. “It was pretty cool.”

Addison's essay: "If I Were Chosen to Lead This Mission"

“My team would be intelligent, safety conscious and mission-oriented. There would be seven people with six roles and each person would be cross-trained so no matter what we could still function. I would be commander in chief (also the first woman on the moon) and on my team would also be a pilot, assistant pilot, two engineers, a Navigator/Communicator and an Educator. We would bring solar panels to ensure power collection from the sun and we would leave an advanced robot which could measure humidity, temperature and other data and send us reports to keep learning about the moon.”