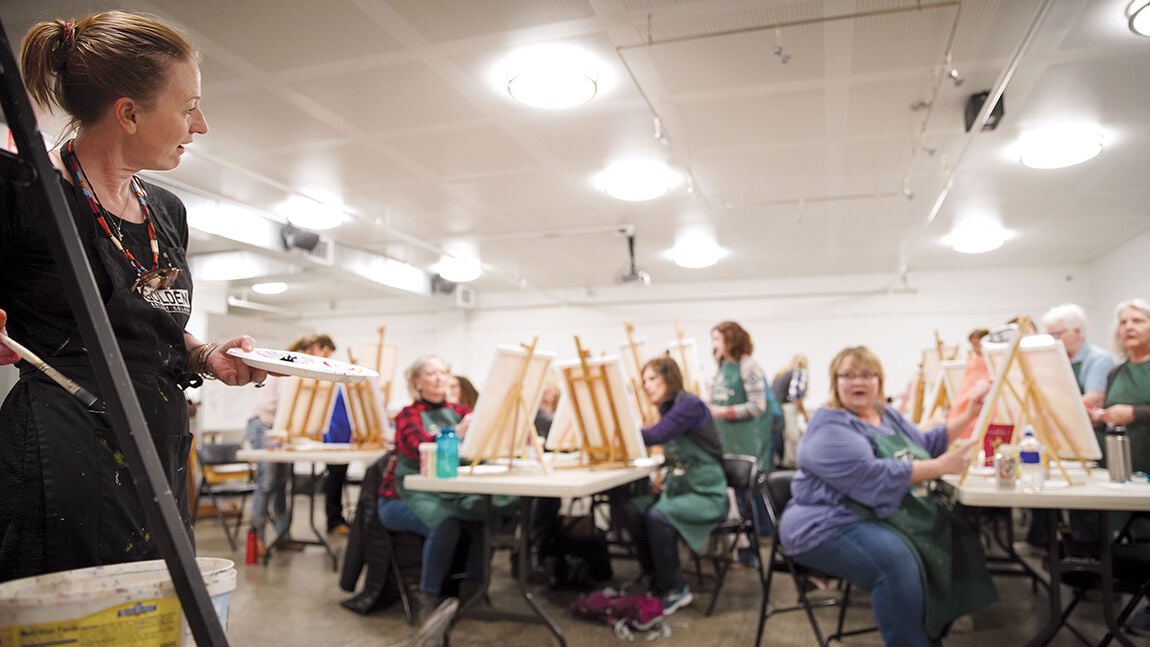 Sonja Caywood, left, leads a class step by step through the process of painting a cow portrait at SAGE Community Arts Saturday, Jan. 18, 2020. 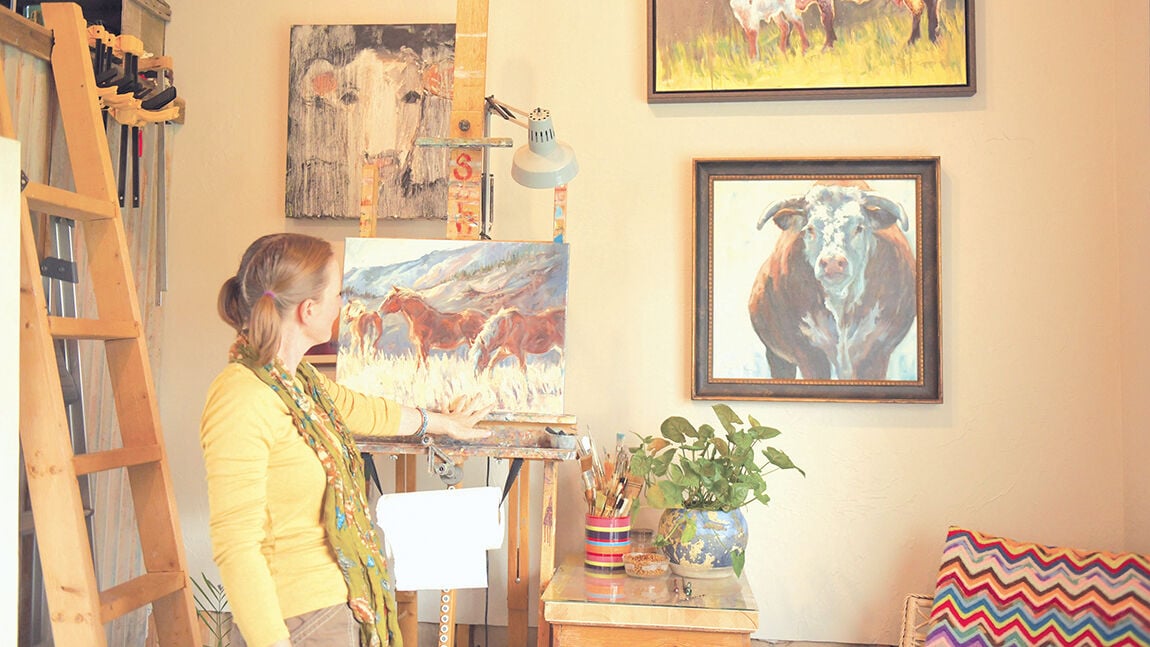 Sonja Caywood points out the subdued golden colors in her painting. Caywood said she sees bright, unusual colors in the landscapes she paints.

Sonja Caywood, left, leads a class step by step through the process of painting a cow portrait at SAGE Community Arts Saturday, Jan. 18, 2020.

Sonja Caywood points out the subdued golden colors in her painting. Caywood said she sees bright, unusual colors in the landscapes she paints.

SHERIDAN — Between social media and marketing, artists have to wear many hats to be successful in selling their art. Being tech-savvy remains vital in the modern art world as more and more art transactions are done on Facebook, Instagram and artists' websites, according to local artists.

The height of the COVID-19 pandemic affected the art market by pushing many artists online. Laureen Weaver, a Canadian-born artist now operating out of Sheridan, said artists moving online encouraged an increase in art buying. She said her best month was in October 2020.

“I sold the most art I’ve ever sold. Most of it was online, and they would call. Not everything was sold online, but it at least sparked the interest,” Weaver said.

Online art has become an easily accessible platform for casual and avid fans of artists to purchase pieces. Sonja Caywood, a local painter settled in Dayton, said art receives a lot of attention online that it might not receive in a gallery. Caywood, who has sold most of her art on Facebook for the last three years, said when artists post pictures of their art, they need to be familiar with the technology to help catch the nuances present in the pieces the best way they can.

“The thing I’ve noticed is that when people have only seen it online, and they like it and they’re fans, and they enjoy it and the whatnot, but when they see it in a show, I always, always hear, or if they come to my studio or they see it in a gallery, they always say, ‘It’s so much better in person,’” Caywood said.

Weaver integrates the use of video on her website and Instagram to show the texture of her art. She said that these videos get the most traffic and are able to show the behind-the-scenes of her creating and can form a better idea in her audience’s minds about the thickness, color and details of her art.

While selling art online has opened up avenues for artists to connect and sell art, galleries have been less flexible in a technologically forward field, Weaver said.

Many galleries do not expand online and form a social media presence, which can be detrimental to artists trying to promote their art in a physical space, Weaver said. She said galleries that survived and thrived adopted online platforms like their own website, Facebook or Instagram. She said she noticed differences between the galleries in Carmel, California, where she lived before, and Sheridan.

“The ones I noticed in Carmel that made it, they were open late, they had art walks late, they put stuff in their window,” Weaver said. “They were available — if they were closed — by appointment and they had all the digital components. They were doing more newsletters and they were sending out more Instagram posts and that kind of thing. They have an online store, a Facebook. So if they do an Instagram, there’s a store there you can buy right online.”

As the economy shifts, artists may expect a decrease in art sales, Caywood said, and it may be important for artists to turn to other ways to sell their art.

“If things got really slow, which things probably will with our economy, I would have to go that route of making mugs and hats and shirts,” Caywood said in response to artists expanding into print and making designs for products.

Weaver also sells tea towels in four or five stores in the area, which she said sells well. She said stores that understand and cater to different artistic mediums and utilize online platforms like Instagram have a good community response and engagement, particularly in downtown Sheridan.

Artists have to be aware of the trends in social media and engage with buyers and fans to sell their art, Weaver said. The ups and downs of art selling are something artists are familiar with, and with a good year of selling art behind them, the market is changing again.

“I don’t know if people are buying art like they used to,” Weaver said.