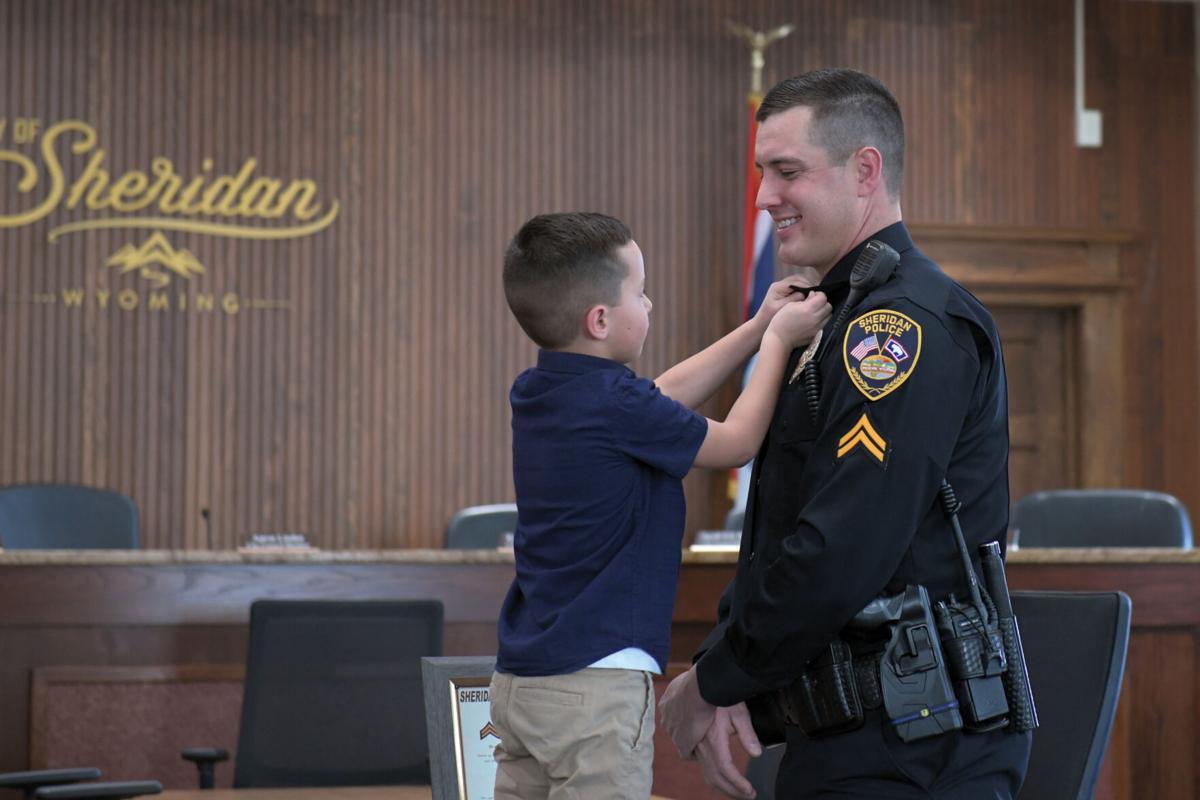 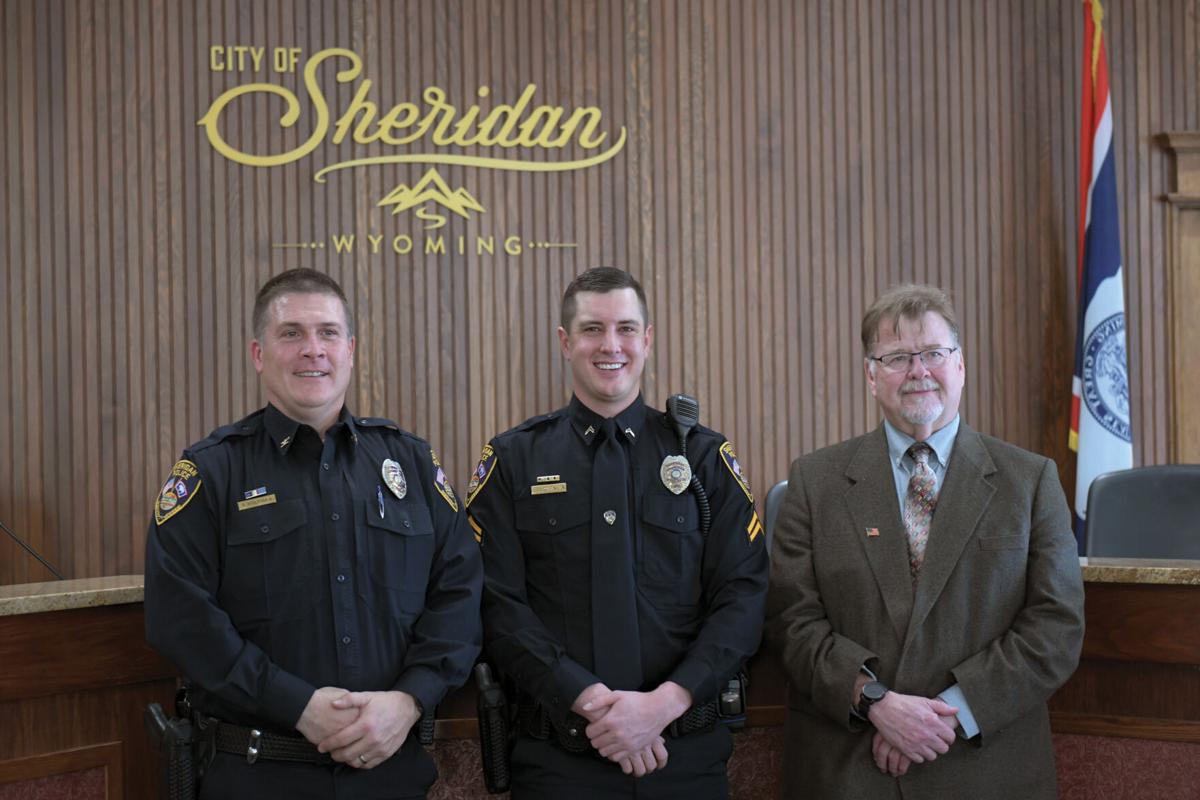 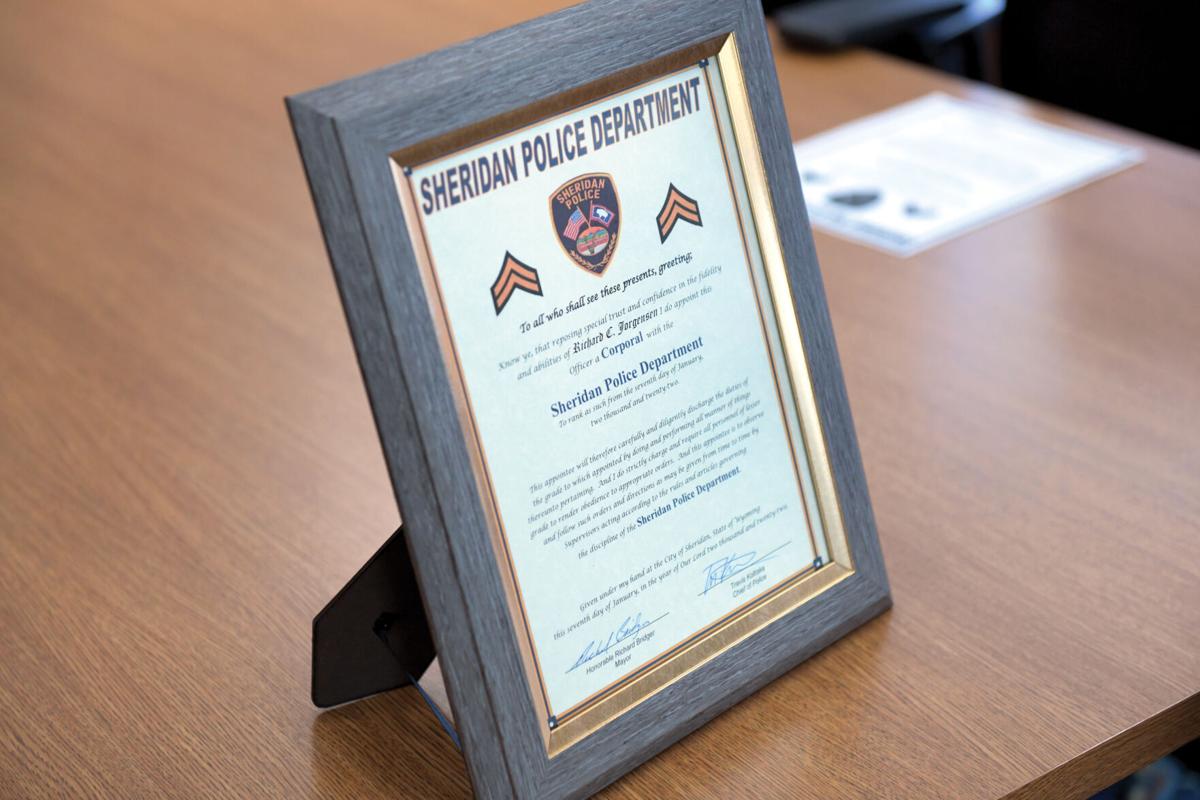 SHERIDAN — The Sheridan Police Department promoted officer Curtis Jorgensen to the rank of corporal in a ceremony Friday.

Jorgensen joined the department nearly six years ago and has worked as a detective for the past three years, SPD Chief Travis Koltiska said as he introduced the officer to the crowd. Since Jorgensen arrived at SPD, he has performed at a high level and offered leadership within the department and mentorship to fellow officers, Koltiska said.

These skills, the chief said, should serve the new corporal well.

“I know he’s going to have an incredible future as a corporal,” Koltiska said.

Jorgensen’s 5-year-old son, Benjamin, stood on a chair to pin on his father’s new corporal collar brass and badge. Although he was a little nervous to pin the badge in front of so many people, Benjamin said the ceremony went well.

“He’s a pro already,” Koltiska said of Benjamin’s brass- and badge-pinning abilities, “We’ll be looking for his application in a few years.”

Members of Jorgensen’s family in the crowd said they were proud of the new corporal’s promotion. Deana and Rick Jorgensen, his parents, said they were proud of their son’s newest accomplishment and his success as a police officer. Jorgensen’s wife, Erika, said she was very proud of her husband’s accomplishment and thankful for the community of people in attendance who had come to celebrate him.

“It’s wonderful to live in a place like this,” she said.

Jorgensen said he was proud of the many years of work as an officer and detective culminating in the promotion. The new corporal said he looks forward to continuing to serve the community and other SPD officers in the new role.

“I feel like I have something to provide in leadership,” Jorgensen said.

His wife pinned on his badge when he was first sworn in as an SPD officer, Jorgensen explained, and his son the new badge. Jorgensen said he hopes future promotions will offer an occasion for his younger son, Bridger Jorgensen, to pin another badge to his chest.