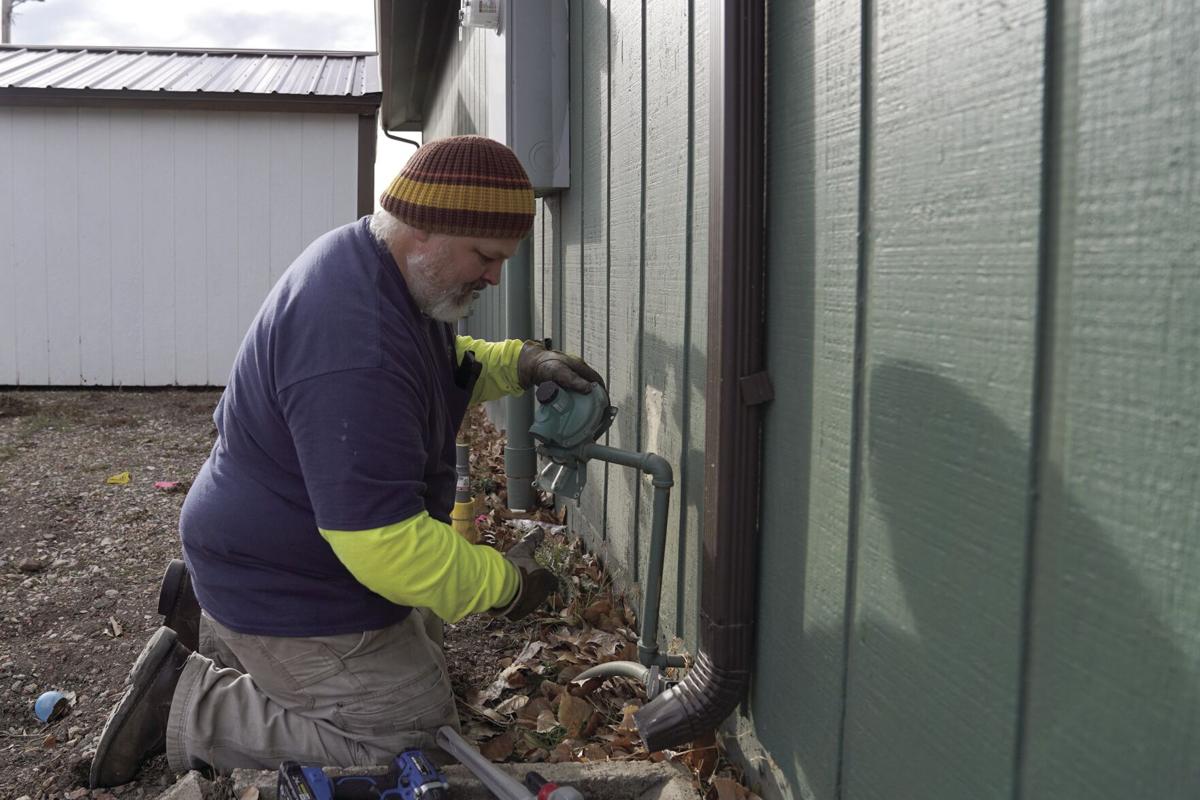 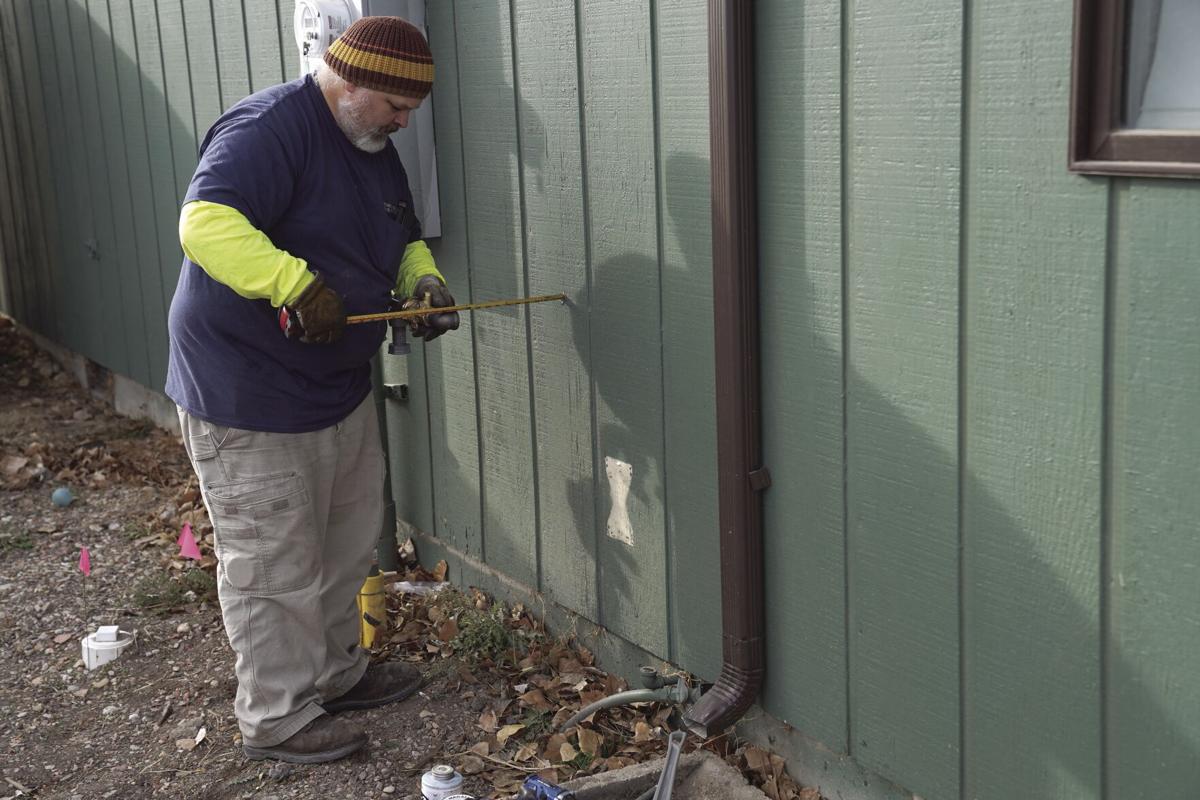 Tyrel Loveless takes a measurement to connect the new gas lines to the building at the daycare center in Ranchester Tuesday, Nov. 23, 2021. 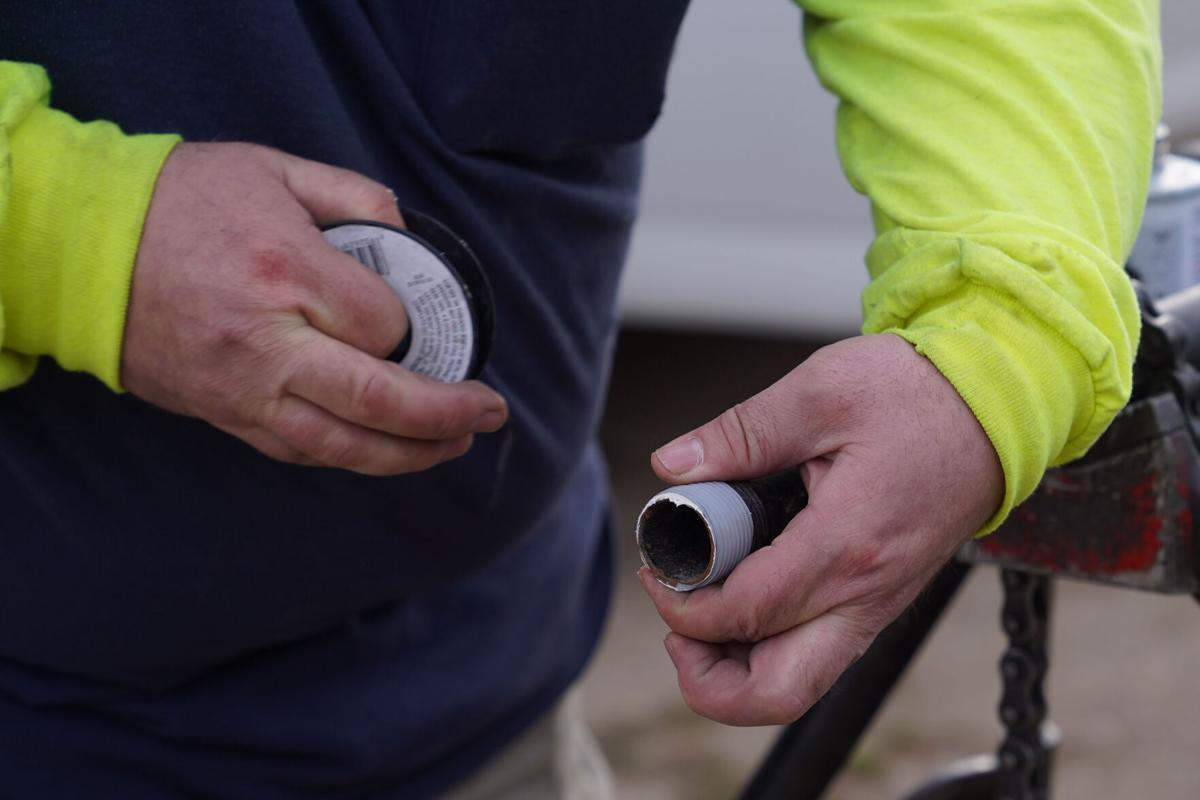 Powder River Heating and AC Incorporated's Tyrel Loveless prepares a steel pipe for a brass shut-off valve while connecting the daycare center to the Tongue River Valley natural gas pipeline Tuesday, Nov. 23, 2021. The daycare center and the schools in Ranchester have relied on propane for heat until now.

Tyrel Loveless takes a measurement to connect the new gas lines to the building at the daycare center in Ranchester Tuesday, Nov. 23, 2021.

Powder River Heating and AC Incorporated's Tyrel Loveless prepares a steel pipe for a brass shut-off valve while connecting the daycare center to the Tongue River Valley natural gas pipeline Tuesday, Nov. 23, 2021. The daycare center and the schools in Ranchester have relied on propane for heat until now.

Like that old arcade game, problems would pop up out of nowhere, Clark said. And as soon as one problem resolved, another would pop right back up.

Clark, who has been involved with the project since 2013, has been whacking moles for well over eight years. Many years of work came to fruition earlier this month, when the first valley residents were converted to natural gas. The project, spanning more than a decade, will bring cost efficiencies to individuals and businesses alike.

In 2008 when the idea first originated, the valley relied on propane and coal for heat in homes, businesses and school buildings, which was pricey. Then-Mayor Bob Wood argued converting to natural gas could lead to major savings for valley residents and businesses.

Indeed, the valley stands to save $600,000 a year by converting from propane, Clark said. Natural gas could also be an incentive for more residents and businesses to move into the valley.

“When people from larger cities move into the valley, they burst into tears the first time they get their propane bill,” Clark said. “Most people are used to natural gas and want the convenience and cost savings of natural gas as opposed to propane.”

For Sheridan County School District 1 alone, Business Manager Jeremy Smith expects the conversion to natural gas to lead to roughly $80,000 in yearly savings. Those dollars, which are roughly equivalent to one full-time teacher, when factoring in total compensation like benefits, can now be reinvested into the classroom, Smith said.

“When you’re comparing the cost of natural gas to the cost of coal or propane, you’re looking at natural gas being about a third of the cost of either of those other options,” Smith said. "(We knew that) if we could figure out a way to make this work, we could have a more affordable energy option now into forever.”

It was clear early in the process the project — estimated to cost anywhere between $4 and $6 million — would be cost-prohibitive, Clark said. So the idea lay dormant for five years until 2013.

School district officials reopened conversations and advocated for the creation of what became the Tongue River Valley Joint Powers Board, Smith said. The board would be a collaboration between the towns of Ranchester and Dayton and the school district. Elected officials from each of those entities’ boards would serve on the joint powers board as well.

Creating a joint powers board provided access to potential federal funding the entities couldn’t receive on their own, Clark said. Everybody involved realized they were traveling into uncharted territory, Smith said.

“This sort of thing had never been done before in Wyoming and not done very often in places outside of Wyoming,” Smith said. “It was far more common on the electrical grid side of things, but there wasn’t a lot of precedent with what we were proposing with the pipeline. We all knew it was going to be quite a challenge, but it was a ‘necessity is the mother of invention’ kind of thing.”

The territory was so new that state legislation needed to be passed to allow joint powers boards to control natural gas lines. Before Rep. Rosie Berger, R-Big Horn, submitted a bill during the 2014 legislative session, state statute said joint powers boards could control water and sewer lines but it made no mention of gas lines.

Someone from the WWC office has been involved through every single stage of the project, according to Sarah Rohrer, the current project manager from WWC.

The next major question was how the project would be funded, Clark said. The board appeared before the Wyoming State Loan and Investment Board on several occasions, asking for project funding. The joint powers board was routinely rejected, although SLIB came to admire its persistence, Clark said.

“We were competing with a whole different group of people,” Clark said. “We were competing against towns with failed systems, places that needed new fire trucks and ambulances, while we were asking for new infrastructure. We felt kind of silly going up against places with real, immediate infrastructure needs, but the truth is we had nowhere else to go. There is no state program that deals specifically with natural gas.”

Lorraine Werner, community programs director for the USDA, said the USDA’s participation in the project “made sense” even though there was relatively little precedent for USDA-funded gas line projects at the time.

“USDA Rural Development is the only federal agency that can build a small town from the underground up,” Werner said. “If it makes sense, if it helps someone, and if it’s legal, we can do it.  This project made sense. Both communities were paying very high rates for alternative heat sources, and natural gas is cleaner and cheaper. Lowering heating costs helps everyone that would like to participate.”

In 2017, the joint powers board was granted a $4 million community facilities loan from the USDA for the construction of the 34-mile pipeline. That amount was later amended to $5 million, when bids from contractor DRM Inc. came in higher than expected.

Construction on the pipeline began in 2020 and was completed in summer 2021. Service lines connecting local properties to the pipeline were installed beginning in August 2021, although the costs of installing the service lines — inflated due to increased construction demand and COVID-19-related supply issues — led to fewer being installed than originally expected. To date, roughly 90 service lines have been installed, Clark said.

“There was a lot of animosity out there based on the cost, but we didn’t really have any control over that,” Clark said.

“Is there something we would do differently?” Rohrer asked. “I mean, yeah, we probably wouldn’t go out to bid in the middle of a global pandemic. But a lot of things just weren’t in our control.”

“Propane is tracking just the same as natural gas, but the difference is that natural gas is purchased through a yearly contract while propane is always bought in the spot market,” Smith said. “So you could see a dramatic increase in propane costs every time you buy it depending on what is happening in the market. But since natural gas is purchased under a contract, it is going to be much less volatile in pricing and more affordable in the long run.”

The first valley residents were converted to natural gas earlier this month, just in time for winter, Rohrer said. WWC expects to be involved in the project for several more years, helping citizens and businesses connect as they’re ready.

As those involved in the long-standing project reflect on it, the words “communication” and “cooperation” come up frequently. This project wouldn’t have been possible without a lot of vision, hard work and a desire to make big changes in the Tongue River Valley, Smith said.

“It’s always impressive to see what a small group of people can do when they just put their heads down and get to work on something,” Smith said. “We completely changed the complexion of the valley by working together.”