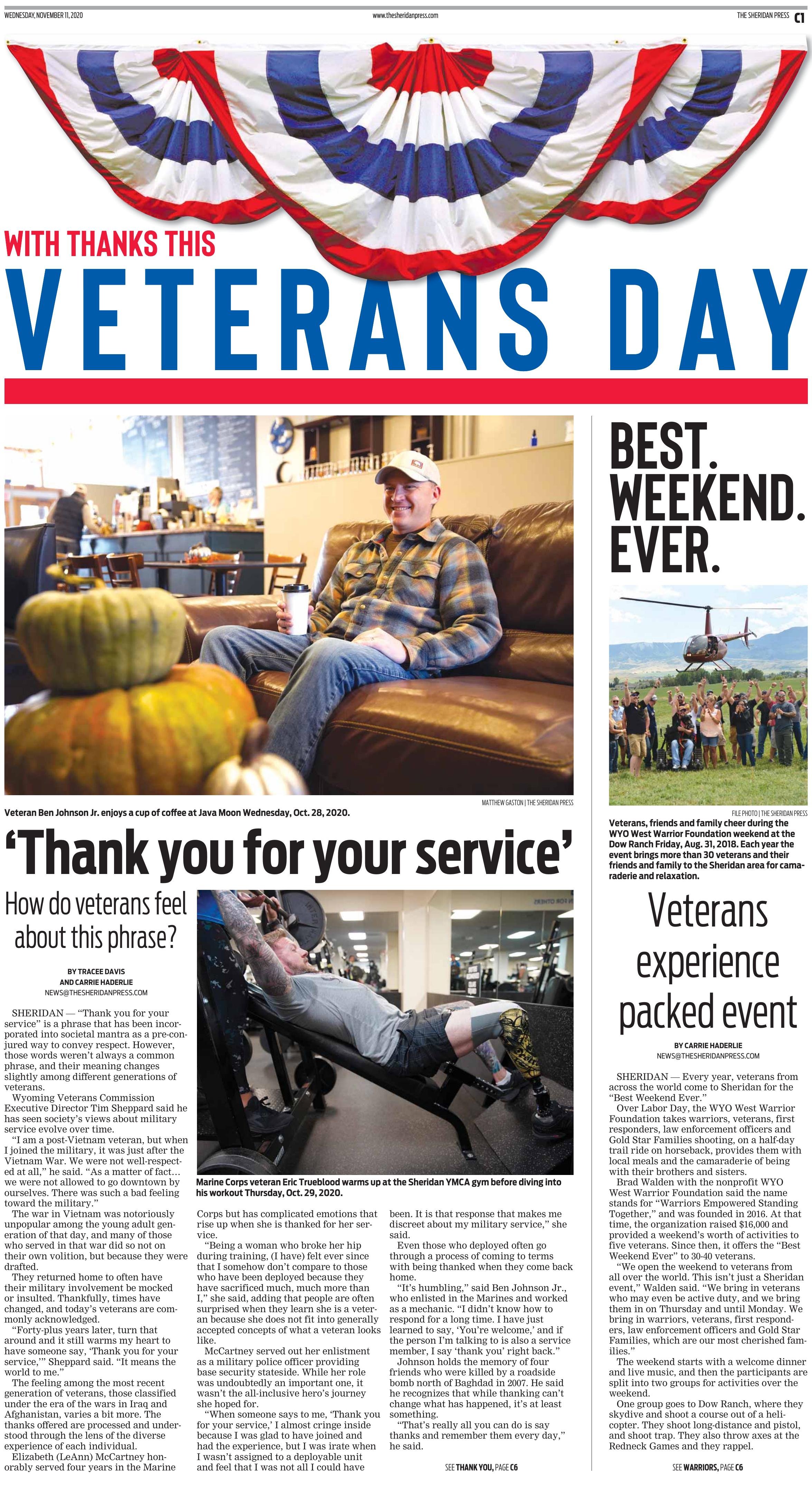 Marine Corps veteran Eric Trueblood gets warmed up at the Sheridan YMCA gym before diving into his workout Thursday, Oct. 29, 2020.

SHERIDAN — However, those words weren’t always a common phrase, and their meaning changes slightly among different generations of veterans.

“I am a post-Vietnam veteran, but when I joined the military, it was just after the Vietnam War. We were not well-respected at all,” he said. “As a matter of fact… we were not allowed to go downtown by ourselves. There was such a bad feeling toward the military.”

The war in Vietnam was notoriously unpopular among the young adult generation of that day, and many of those who served in that war did so not on their own volition, but because they were drafted.

They returned home to often have their military involvement be mocked or insulted. Thankfully, times have changed, and today’s veterans are commonly acknowledged.

“Forty-plus years later, turn that around and it still warms my heart to have someone say, ‘Thank you for your service,’” Sheppard said. “It means the world to me.”

The feeling among the most recent generation of veterans, those classified under the era of the wars in Iraq and Afghanistan, varies a bit more. The thanks offered are processed and understood through the lens of the diverse experience of each individual.

Elizabeth (LeAnn) McCartney honorably served four years in the Marine Corps but has complicated emotions that rise up when she is thanked for her service.

“Being a woman who broke her hip during training, (I have) felt ever since that I somehow don’t compare to those who have been deployed because they have sacrificed much, much more than I,” she said, adding that people are often surprised when they learn she is a veteran because she does not fit into generally accepted concepts of what a veteran looks like.

McCartney served out her enlistment as a military police officer providing base security stateside. While her role was undoubtedly an important one, it wasn’t the all-inclusive hero’s journey she hoped for.

“When someone says to me, ‘Thank you for your service,’ I almost cringe inside because I was glad to have joined and had the experience, but I was irate when I wasn’t assigned to a deployable unit and feel that I was not all I could have been. It is that response that makes me discreet about my military service,” she said.

Even those who deployed often go through a process of coming to terms with being thanked when they come back home.

“It’s humbling,” said Ben Johnson Jr., who enlisted in the Marines and worked as a mechanic. “I didn’t know how to respond for a long time. I have just learned to say, ‘You’re welcome,’ and if the person I’m talking to is also a service member, I say ‘thank you’ right back.”

Johnson holds the memory of four friends who were killed by a roadside bomb north of Baghdad in 2007. He said he recognizes that while thanking can’t change what has happened, it’s at least something.

“That’s really all you can do is say thanks and remember them every day,” he said.

Eric Trueblood also paid a high price during his military service. He lost his right leg to a landmine in Afghanistan in 2011. Even after having to adapt to life as an amputee, he doesn’t necessarily think of himself as having done anything that warrants being thanked.

“I didn’t have any plans after high school, and that was my best option to stay out of trouble,” he laughed, adding that his dad served in the Vietnam War and his grandfather in the Korean War.

“It’s nice when someone says, ‘Thank you for your service,’ but they don’t have to do that,” Trueblood said. “What I did, I did for my own reasons.”

Today, the all-volunteer status of the military means veterans do not always view themselves as someone that provided a “service,” but rather as people who joined for various reasons that might include job training, college money or a chance to travel.

“In the beginning, when I was younger, (being thanked) made me uncomfortable because I was doing what I was supposed to do — what I wanted to do,” Trueblood said. “Now that I’m older, I do understand it and appreciate it.”

The youngest generation of veterans has a grasp on thanking military members and why it’s important, even if they personally wrestle with the concept.

“I think a lot about the guys from Vietnam and what they went through,” Johnson said.

“Those dudes saw some really tragic things,” Trueblood agreed. “For the past decade or so, it has gotten a lot better. When we come home, it’s very welcoming. That is above and beyond what we have seen as a culture before.”

Veterans, friends and family cheer during the WYO West Warriors Foundation weekend at the Dow Ranch Friday, Aug. 31, 2018. The five-day event brought more than 30 veterans and their friends and family to the Sheridan area for camaraderie and relaxation.

SHERIDAN — Every year, veterans from across the world come to Sheridan for the “Best Weekend Ever.”

Over Labor Day, the WYO West Warrior Foundation takes warriors, veterans, first responders, law enforcement officers and Gold Star Families shooting, on a half-day trail ride on horseback, provides them with local meals and the camaraderie of being with their brothers and sisters.

Brad Walden with the nonprofit WYO West Warrior Foundation said the name stands for “Warriors Empowered Standing Together,” and was founded in 2016. At that time, the organization raised $16,000 and provided a weekend’s worth of activities to five veterans. Since then, it offers the “Best Weekend Ever” to 30-40 veterans.

“We open the weekend to veterans from all over the world. This isn’t just a Sheridan event,” Walden said. “We bring in veterans who may even be active duty, and we bring them in on Thursday and until Monday. We bring in warriors, veterans, first responders, law enforcement officers and Gold Star Families, which are our most cherished families.”

The weekend starts with a welcome dinner and live music, and then the participants are split into two groups for activities over the weekend.

One group goes to Dow Ranch, where they skydive and shoot a course out of a helicopter. They shoot long-distance and pistol, and shoot trap. They also throw axes at the Redneck Games and they rappel.

The second group goes to Eatons’ Ranch, where they take a three-and-a-half hour trail ride followed by lunch and an afternoon bass fishing.

“Friday night we have an intimate gala and fundraiser,” Walden said. “Then those groups switch for Saturday, so they all get to do both.”

On Sunday, the participants eat at The Pony and then head to Don King Days for the only fenceless rodeo in the world. Sunday night, the foundation hosts another dinner, where participants are encouraged to share what they liked and what they would like to see changed about the weekend.

“We talk about who thought it was the best weekend ever, who it helped … and we present them with a flag as a symbol of our appreciation,” Walden said.

Traumatic brain injury and post-traumatic stress are very real among veterans, and Walden said the foundation wants to find a way to give back to those who have given so much.

“Our event isn’t what I call a ‘tier one’ healing environment. If someone just gets back from a deployment … there are places that have a staff to help,” he said. “But I have guys coming to my event that have been out for 50 years. … PTSD was overlooked for so many years.”

The weekend alone does not heal anyone but provides the environment for the healing process to occur naturally, he said.

“I know how all the Vietnam vets were treated when they came home,” Walden said. “We never want that to happen to any of our women and men again, who are returning from deployment and are in law enforcement or first response, and our Gold Star Families. They need to be treated with the utmost respect and kindness.”

Participants are often nominated by a previous attendee and are vetted by the foundation.

“We have it dialed in to where we have 30-40 veterans that come every year, and we raise about $100,000 annually. It costs about $96,000 to put the event on so it is perfect. Not one person takes a dime from this organization. We know where all our money goes and it goes to the right place,” Walden said.

The public can donate to the WYO West Warrior Foundation and can offer a corporate level sponsorship that allows attendance to the gala Friday night or a day with the veterans at Dow Ranch. In past years, attendance has been about half Wyoming people and half nonresident.

“We have had veterans from our local communities, and we have had CBs, tunnel rats, Vietnam vets all the way to those currently serving. We have had Korean War vets, and representation from WWII all the way to guys that have been in Syria,” Walden said. “It is not like we have only young guys, or old guys … There is camaraderie from being around their brothers and sisters.”

Click and hold your mouse button on the page to select the area you wish to save or print. You can click and drag the clipping box to move it or click and drag in the bottom right corner to resize it. When you're happy with your selection, click the checkmark icon next to the clipping area to continue.