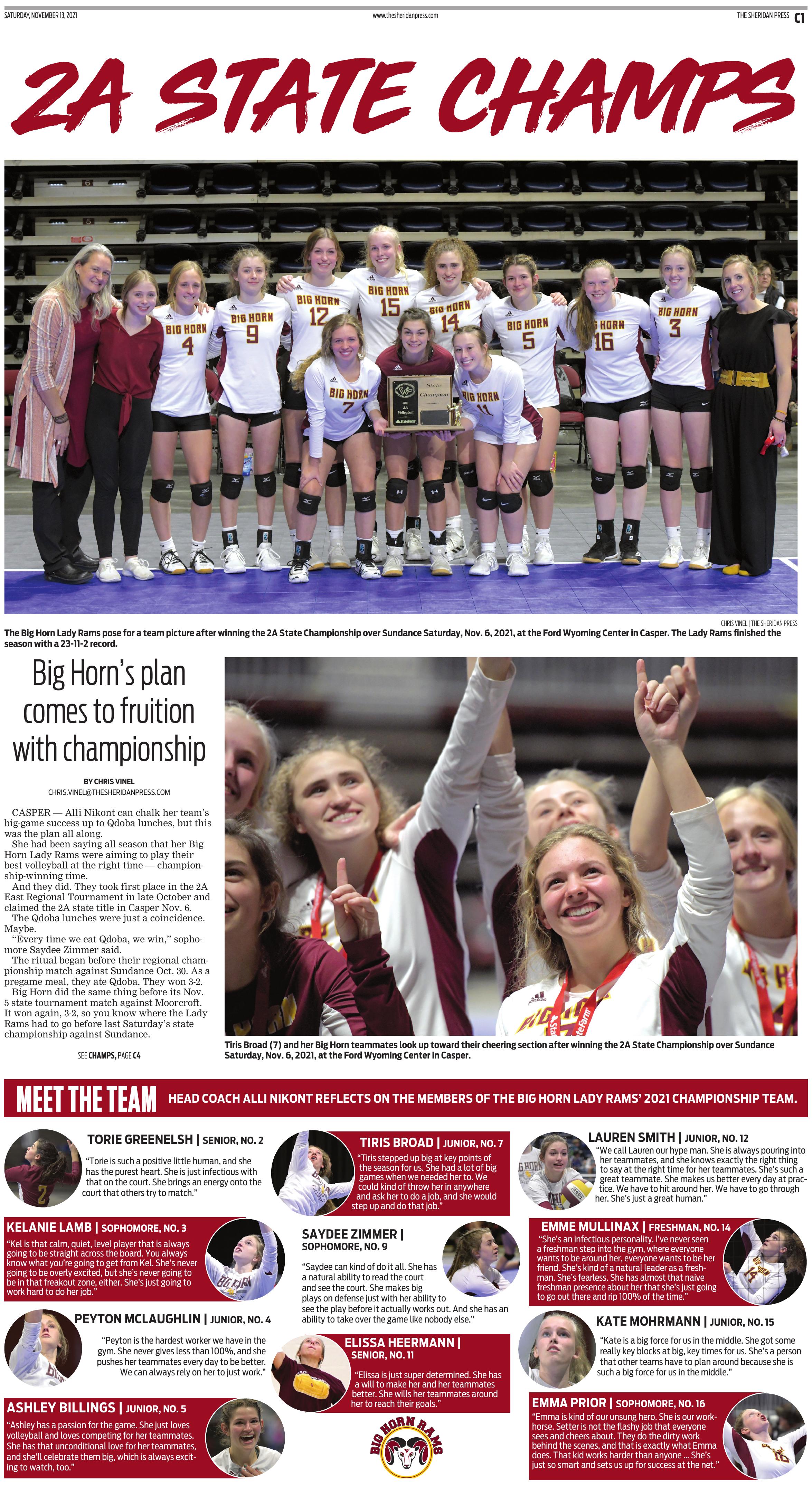 The Big Horn Lady Rams pose for a team picture after winning the 2A State Championship over Sundance Saturday, Nov. 6, 2021, at the Ford Wyoming Center in Casper. The Lady Rams finished the season with a 23-11-2 record.

Tiris Broad (7) and her Big Horn teammates look up toward their cheering section after winning the 2A State Championship over Sundance Saturday, Nov. 6, 2021, at the Ford Wyoming Center in Casper.

CASPER — Alli Nikont can chalk her team’s big-game success up to Qdoba lunches, but this was the plan all along.

She had been saying all season that her Big Horn Lady Rams were aiming to play their best volleyball at the right time — championship-winning time.

And they did. They took first place in the 2A East Regional Tournament in late October and claimed the 2A state title in Casper Nov. 6.

The Qdoba lunches were just a coincidence. Maybe.

The ritual began before their regional championship match against Sundance Oct. 30. As a pregame meal, they ate Qdoba. They won 3-2.

Big Horn did the same thing before its Nov. 5 state tournament match against Moorcroft. It won again, 3-2, so you know where the Lady Rams had to go before last Saturday’s state championship against Sundance.

“Meal of champions!” head coach Alli Nikont said Saturday. “We’re 3-0 on Qdoba, baby! They were not happy with me today.”

But, really, their story started May 27. The Lady Rams met for the first time as a team and laid out their season goals. The loftiest one: win a state championship.

“We’re setting the bar high, and we want to attack every practice that way,” Nikont said in August. “Then, when we hit those big games, it’s just second nature. We’ve set some big goals in the gym, and I’m really excited. I think the sky’s the limit for this team if we can make the right things happen at the right times.”

They did make the right things happen at the right times, but it took some work to get there.

Though Big Horn finished with a 23-11-2 record, it opened the season Aug. 27 with two losses in three matches that afternoon. The Lady Rams were a young team, featuring only two seniors.

But they developed a routine and stuck to it. Even in the state tournament, they found a gym — this time, it was Natrona County’s — and warmed up with some pregame pass-around, and they journaled.

They grew during the course of the year. Nikont made strategic moves like bringing the Lady Ram summer camp kids back to practice with the team during a stressful week or entering the Casper Invitational Tournament to challenge her players. Big Horn was the only 2A team in the Casper Invitational field, but the event happened at the Ford Wyoming Center, the same place as the state tournament. So when last week rolled around, the Lady Rams already had seen and played in the large arena. They faced hurdles and setbacks, like a 3-0 rivalry loss to Tongue River in October, throughout the season, but it all meshed together near the end.

They won eight straight to close the year and secure the championship.

“This is where they wanted to be,” Nikont said after winning the state crown. “To watch them celebrate and be here is pretty awesome.”

After teary-eyed hugs on the court following the state championship match, Big Horn had further celebration plans. Nikont had been promising her players a sit-down dinner.

This time, they weren’t going to Qdoba. The job was already complete. Now, no superstitions were necessary.

“We might throw coach on that (mechanical bull),” freshman Emme Mullinax said. “We’re going to tell (the restaurant’s employees) it’s her birthday. She’s going to have to ride it like there’s no tomorrow.”

After nearly six months of prep for Nikont and her team, this might’ve been better than her birthday.

Click and hold your mouse button on the page to select the area you wish to save or print. You can click and drag the clipping box to move it or click and drag in the bottom right corner to resize it. When you're happy with your selection, click the checkmark icon next to the clipping area to continue.