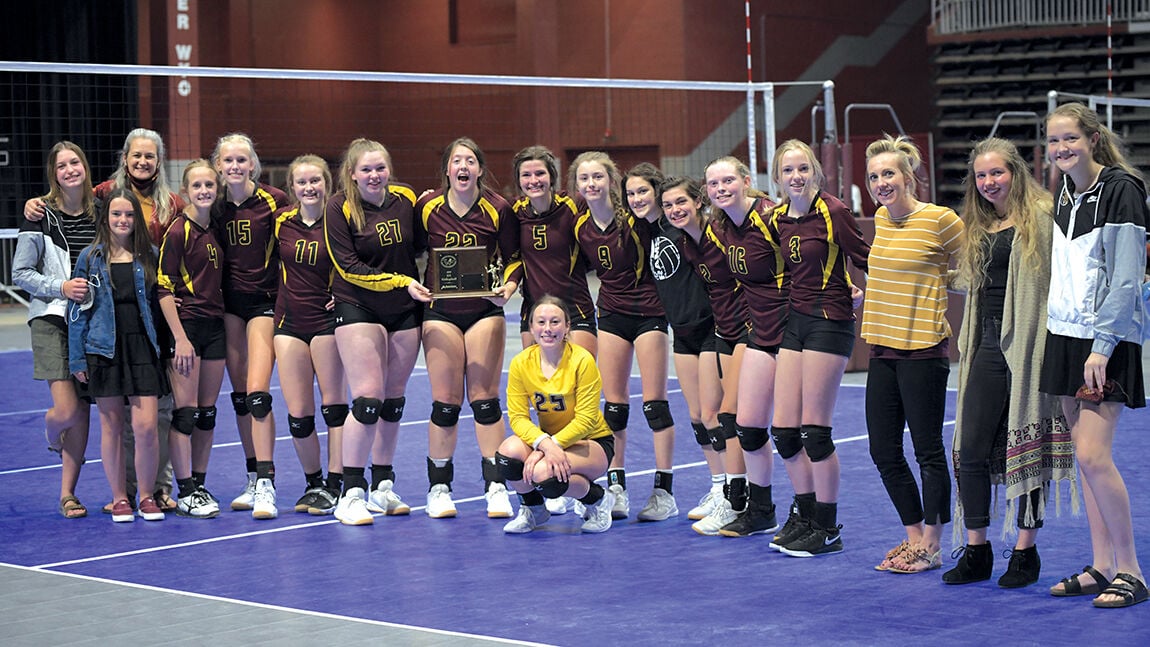 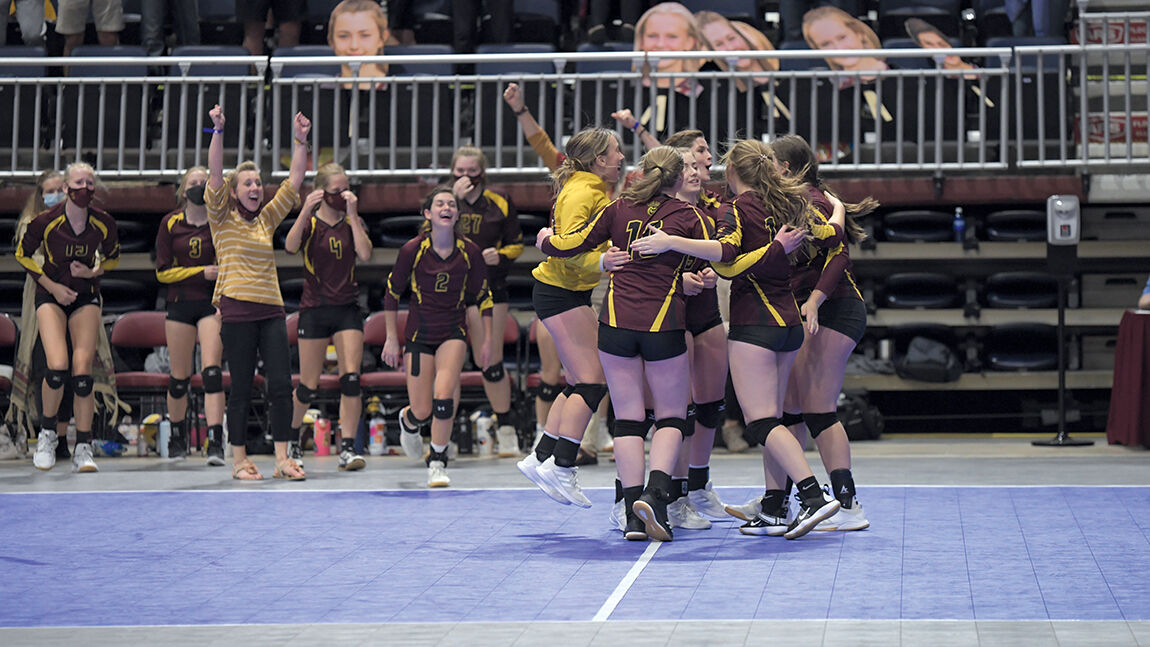 The Big Horn Rams volleyball team celebrates its game-winning, 15th point against Shoshoni in the fifth set of the third-place match at the Casper Events Center Thursday, Nov. 5, 2020. The win earned the Lady Rams the third-place title at the 2A state tournament. 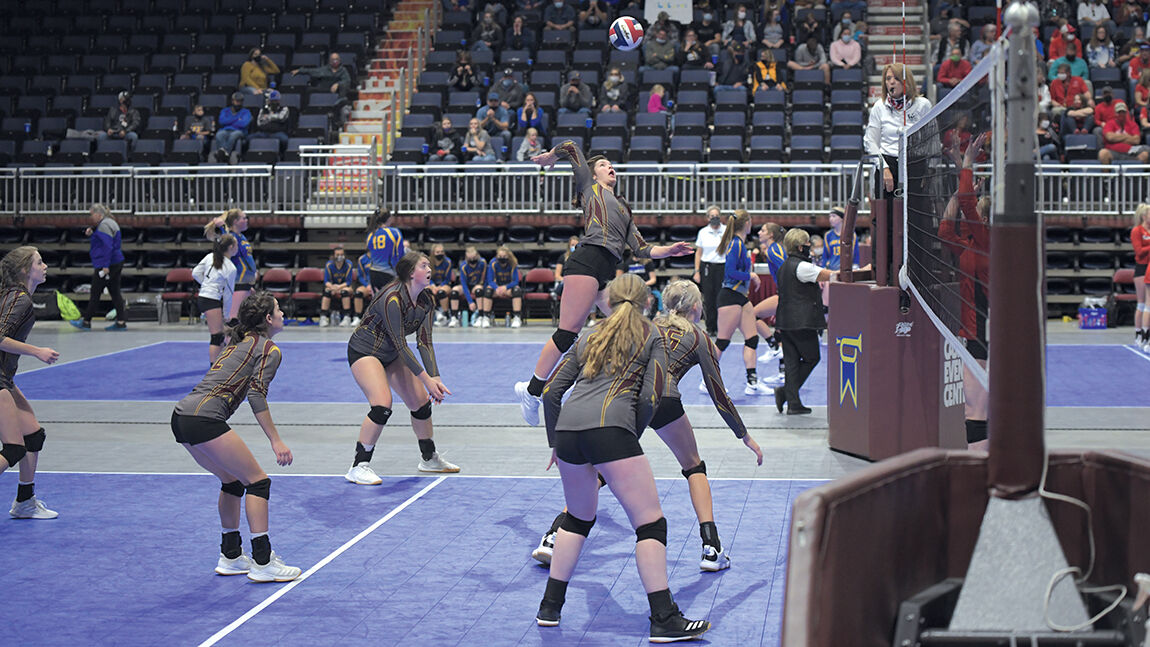 Emily Simanskis | The Sheridan Press Big Horn sophomore Ashley Billings goes up for a kill during the Lady Rams match against Riverside at the 2A state tournament at the Casper Events Center Thursday, Nov. 5, 2020. Big Horn lost 3-1 to Riverside but later beat Shoshoni to finish third in the state.

The Big Horn Rams volleyball team celebrates its game-winning, 15th point against Shoshoni in the fifth set of the third-place match at the Casper Events Center Thursday, Nov. 5, 2020. The win earned the Lady Rams the third-place title at the 2A state tournament.

Emily Simanskis | The Sheridan Press Big Horn sophomore Ashley Billings goes up for a kill during the Lady Rams match against Riverside at the 2A state tournament at the Casper Events Center Thursday, Nov. 5, 2020. Big Horn lost 3-1 to Riverside but later beat Shoshoni to finish third in the state.

CASPER — Eight hours, 14 sets and three volleyball games later, the Big Horn Lady Rams lined up at the edge of one of the four volleyball courts at the Casper Events Center with the 2A third-place state trophy in hand.

The line up looked much like how Big Horn lined up to start their day with team introductions at the 2A state tournament across from Greybull High School at 10 a.m., except players and coaches smiled through haphazard hair wearing significantly sweatier uniforms.

Senior Amelia Gee answered simply when asked how she felt at the end of the day.

“It was exhausting,” she said and laughed. “Mentally and physically, it definitely tested our team, but it was nice to see we could get through it and play together.”

Though tired, the Lady Rams ended the day how they started it — with excitement and all together, lined up literally side-by-side and unified in their efforts.

“It’s just the icing on the cake of an awesome season,” Nikont said. “I think we’ve done something special this year, and I think it’s just the beginning of the direction we’re going to move in.”

Big Horn started their 2020 tournament appearance as the East’s No. 2 seed against the West’s No. 3-seeded Greybull. Nikont said at the conference tournament last week, the Lady Rams looked nervous to start and admitted at the state tournament Big Horn looked “scared to death” through the first two sets.

The heightened nervousness showed on the scoresheet, as the Lady Rams fell behind 2-0 to the Buffaloes by scores of 25-17, 25-18. But, in typical Big Horn volleyball fashion, the Lady Rams didn’t fear the deficit and clawed their way back to a 26-24 win in the third set.

Becoming more comfortable and confident, Big Horn handily took set No. 4 with a 25-19 win and then played through a 4-4 and 7-7 tie in the fifth set to beat the Buffaloes 25-19 and advance to the tournament’s semifinals.

Against the West’s No. 1-ranked Riverside, which started the day with a 3-1 win over Tongue River, the Lady Rams found themselves facing a deficit during a deciding set in a crucial game.

But, unlike many times before and a mere three hours earlier, Big Horn didn’t pull off a come-from-behind victory against the Rebels.

The Lady Rams lost the first set 25-21, rallied to win the second 25-21 then dropped the third 25-13. Even with a sizable, well-traveled crowd comprised of students, parents and cardboard fatheads of the Lady Rams cheering the team on, Big Horn ultimately lost 25-15 in the fourth set.

Between the first and second set, Nikont had asked her players in the huddle which team loved volleyball more, to which the Lady Rams replied emphatically, “We do.” The sentiment carried Big Horn to their third-place finish.

“We talked about ‘mind over matter’ and ‘one point at a time,’ and it was pretty awesome,” Nikont said.

The schedule of the day didn’t allow for much down time, but Big Horn called a team meeting and reminded each other to play together.

The third-place match featured the 2A’s No. 2 teams. The Lady Rams faced the West’s No. 2-seeded Shoshoni High School in their final match of the tournament and began unconventionally — Big Horn won the first set 26-24 to start.

The Wranglers and Lady Rams traded sets — 25-22 Wranglers, 26-24 Rams, 25-21 Wranglers — before taking the floor as the only two teams still playing at the end of the long day. Big Horn built an early lead in the fifth set, but Shoshoni put up a fight and forced Nikont to call a timeout.

The break helped and, coupled with the “I believe” chants from faithful Big Horn student spectators, the Lady Rams played to an 15-11 victory.

Exuberant celebration ensued for several seconds, which looked like all the Rams could muster before relieved hugs and high fives followed.

“I love these girls,” Nikont said. “I really love them and to watch them never give up on themselves, I think, is the most awesome thing.”