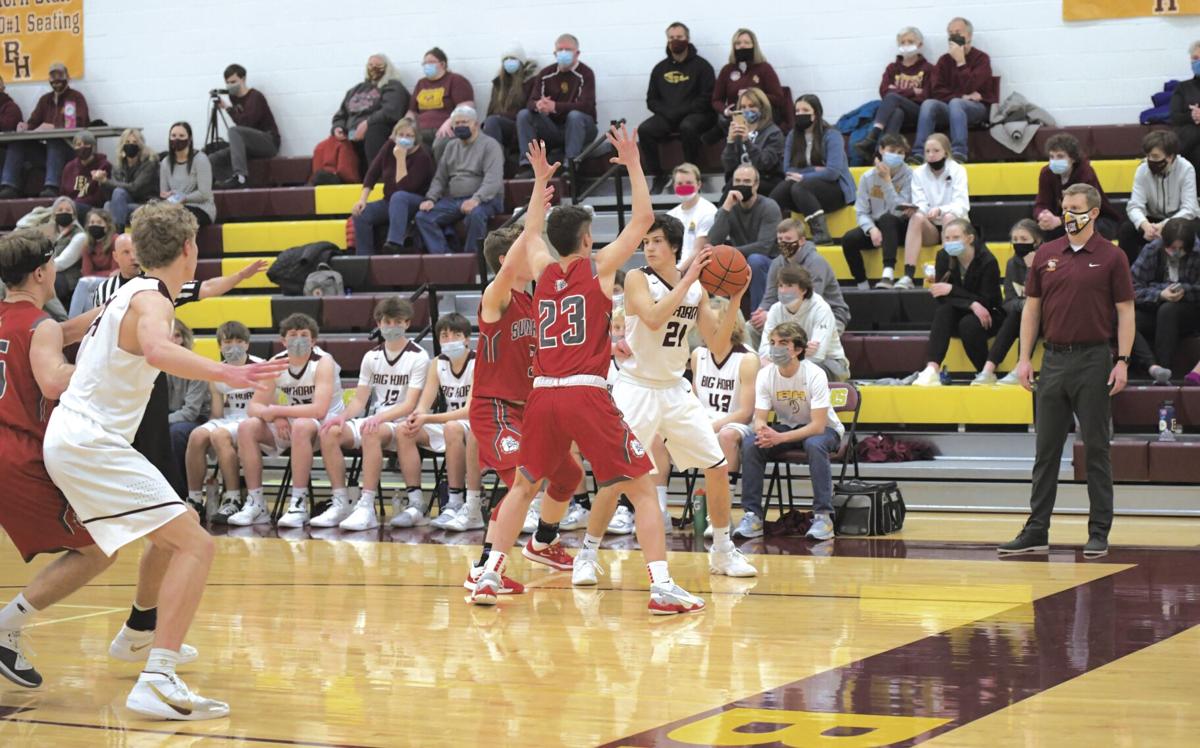 Big Horn’s Cade Butler looks for a teammate to pass to as Sundance players Brad Kruger and Gunner Mclaughlin trap Butler in the corner Saturday, Feb. 13, 2021. The Bulldogs beat the Rams 55-39. 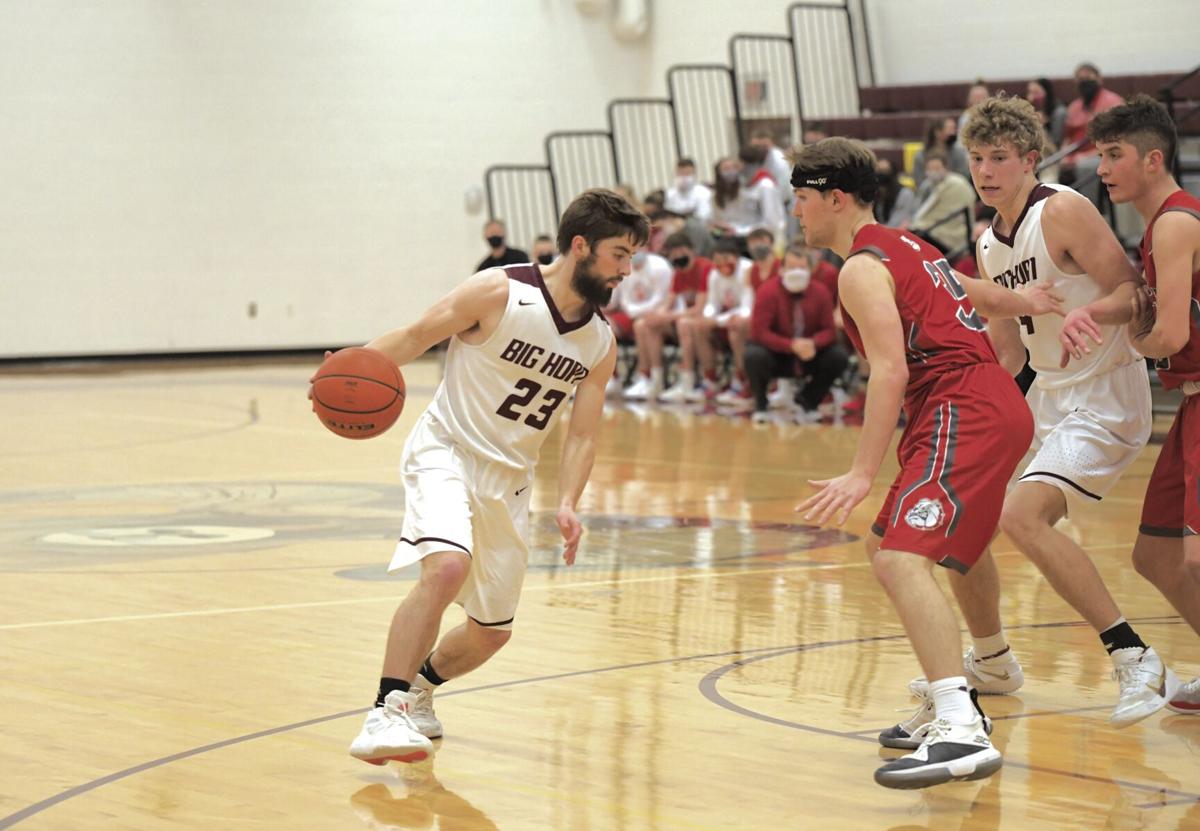 Big Horn senior Carson Bates prepares to evade Sundance’s Wyatt Gillespie during the Rams game vs. the Bulldogs Saturday, Feb. 13, 2021. Bates and the rest of the Big Horn team struggled with its shooting in the second half, ultimately allowing Sundance to win by 16 points. 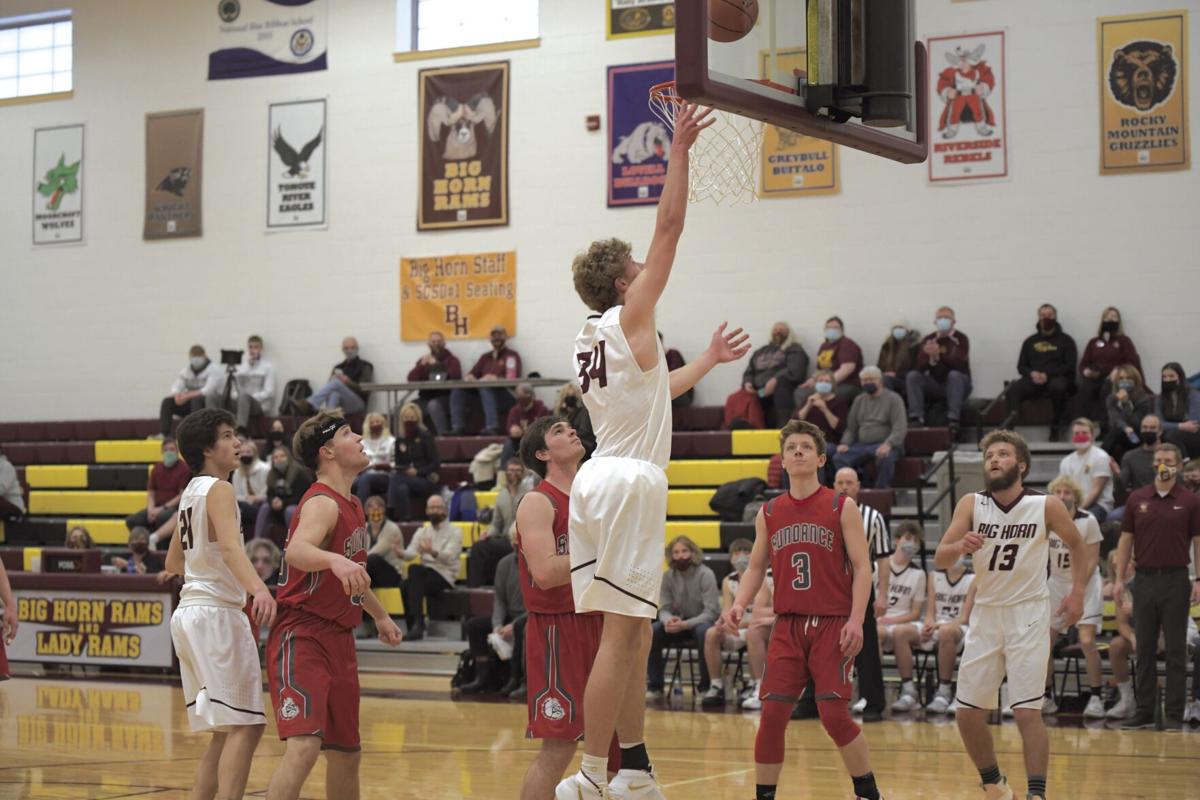 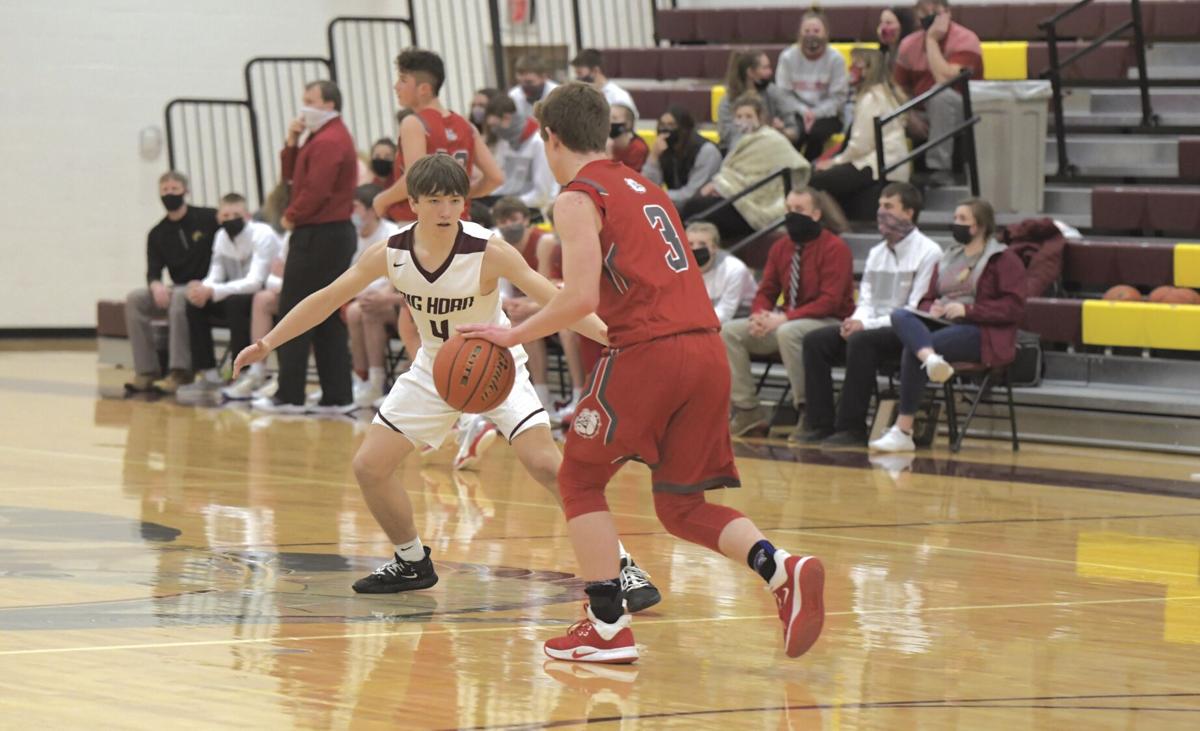 Big Horn’s Cade Butler looks for a teammate to pass to as Sundance players Brad Kruger and Gunner Mclaughlin trap Butler in the corner Saturday, Feb. 13, 2021. The Bulldogs beat the Rams 55-39.

Big Horn senior Carson Bates prepares to evade Sundance’s Wyatt Gillespie during the Rams game vs. the Bulldogs Saturday, Feb. 13, 2021. Bates and the rest of the Big Horn team struggled with its shooting in the second half, ultimately allowing Sundance to win by 16 points.

BIG HORN — The Big Horn High School boys basketball team’s game against Sundance Saturday afternoon mimicked its earlier performance against the Bulldogs this season — a close game at halftime and Sundance’s experience propelling it to a 16-point victory. Though the Rams played to a 55-39 loss to the 2A No. 2 Bulldogs Saturday, Big Horn’s consistent effort served as a bright spot for the team, and the Rams’ poor shooting day gives them a concrete area of improvement.

“I told our guys, ‘We didn’t get outworked,’” head coach Cody Ball said. “‘We played hard and they played hard, but we got out-toughed.’ … They thought the game better than we did, and that was the biggest difference.”

Big Horn (7-7, 3-4 conference) has proven itself against formidable opponents in the past, defeating 2A’s No. 1 Rocky Mountain 62-59 two weeks ago. The 32-minutes-long effort showed the relatively young team’s ability to compete with the best in its class when the Rams play their best for the whole contest.

“We’re going to demand excellence,” head coach Cody Ball had said to his players before the game began.

Big Horn’s first quarter of Saturday’s game against the Bulldogs (13-1, 6-0 conference) appeared close to excellent, as junior Cade Butler drew two charges in the opening four minutes, and the Rams matched Sundance’s scores with baskets of their own. After eight minutes of play Big Horn led 11-9.

Sophomore Wyatt Brown came off the bench and drained a 3-pointer in the second quarter to put the Rams up 16-15 with 5:23 left to play in the half. Brown also drew two charges against the Bulldogs in the quarter, though a Sundance field goal in the final minute of the half gave it a 22-21 lead to take into the locker room.

Ball said Brown’s performance off the bench came as a reward for the sophomore’s effort during the past week of practice after the head coach encouraged his team to play hard on defense and rebound following Big Horn’s loss to Tongue River last Thursday.

The same effort Brown epitomized in the second quarter showed throughout the Rams’ second half, though Sundance’s senior-heavy lineup nailed 3-pointers and field goals while the Bulldogs’ No. 1 defense in 2A forced Big Horn to shoot poorly.

“We just didn’t get anything rolling on offense, so it was hard to keep with them,” senior Carson Bates said.

Sundance ended the third quarter with a 39-29 lead, and six of the Bulldogs’ 16 points in the fourth quarter came from the 2A East’s No. 6 best scorer Lane Gill. The junior finished the game with 11 points, and seniors Brad Kruger and Gunner Mclaughlin scored 14 and 13 points, respectively, to help the Bulldogs to its 55-39 win.

Rams seniors James Richards and Garrett Custis and sophomore Toby Schons scored eight points each. Running the point, Bates scored four points but attempted to match the poised Bulldogs as an example for his teammates during the second half.

Ball said Big Horn will work this week during practice on finding “easy points” by attacking the rim or the post when deep shots don’t drop for the Rams, as they didn’t Saturday. Ball and Bates said consistency, both physically and mentally, will decide Big Horn’s success during the final stretch of the regular season.

The Rams hosts Wright at 6 p.m. Friday to start their final weekend of regular season play before the regional tournament the following weekend.