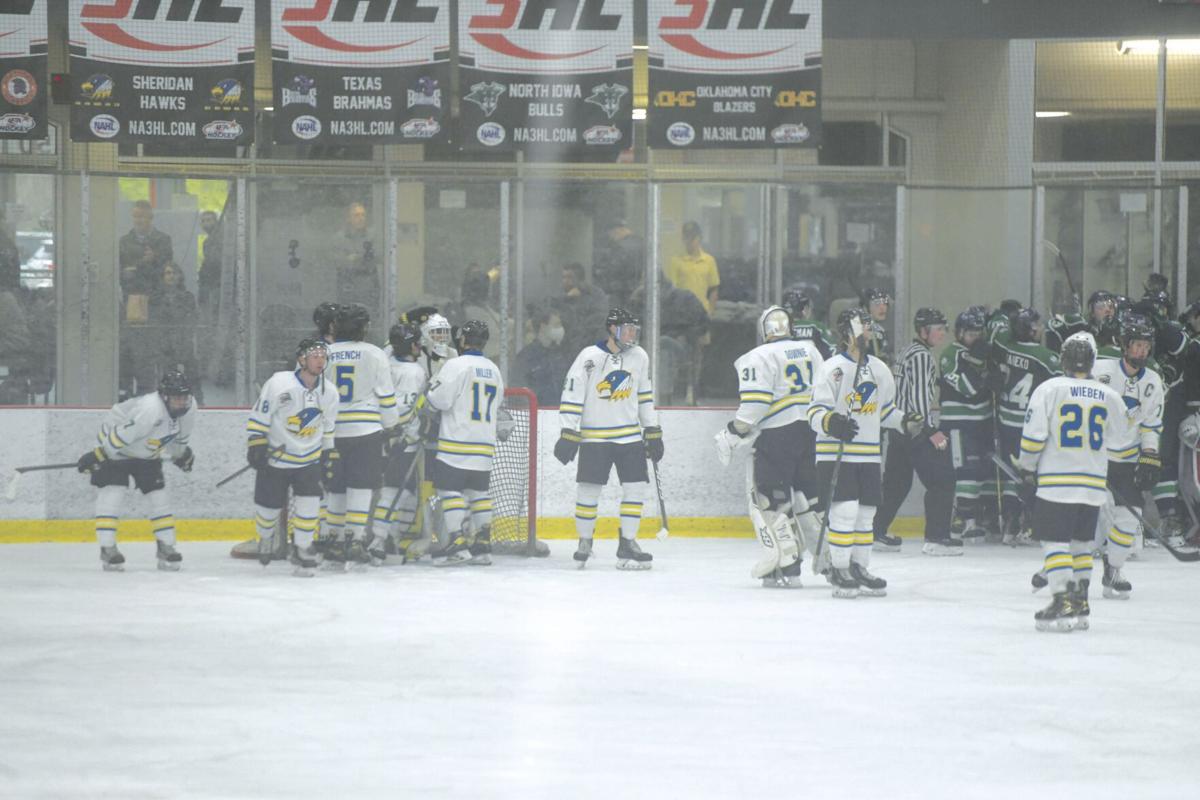 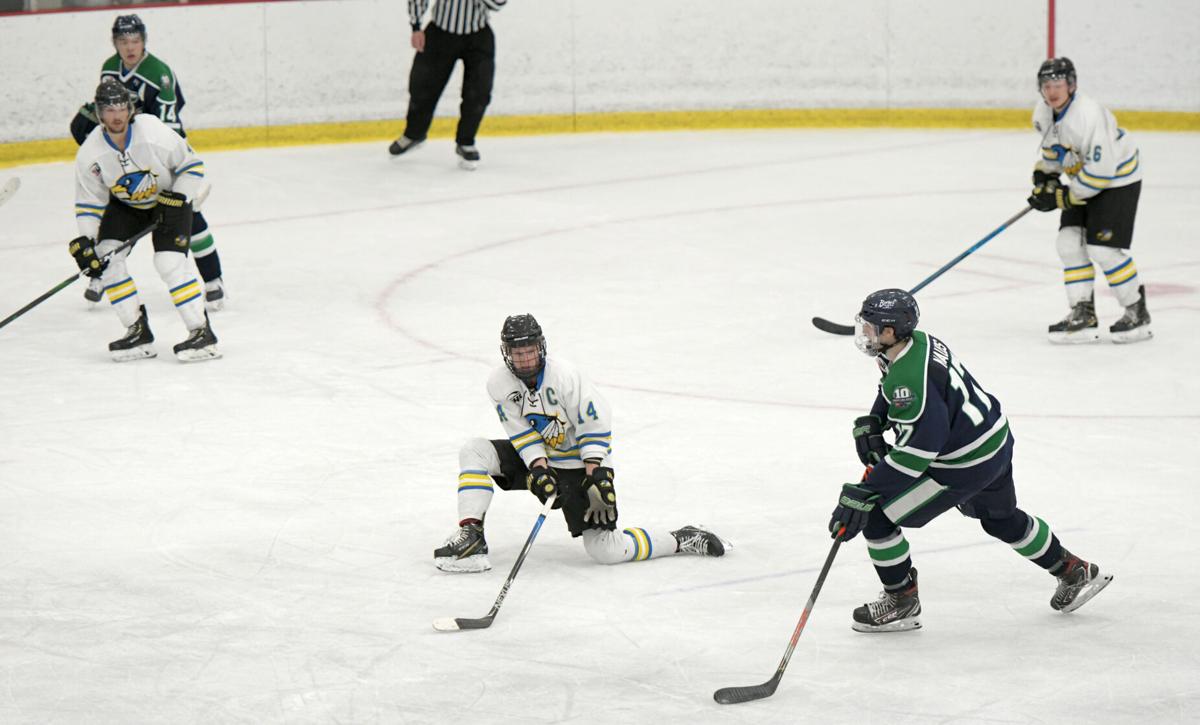 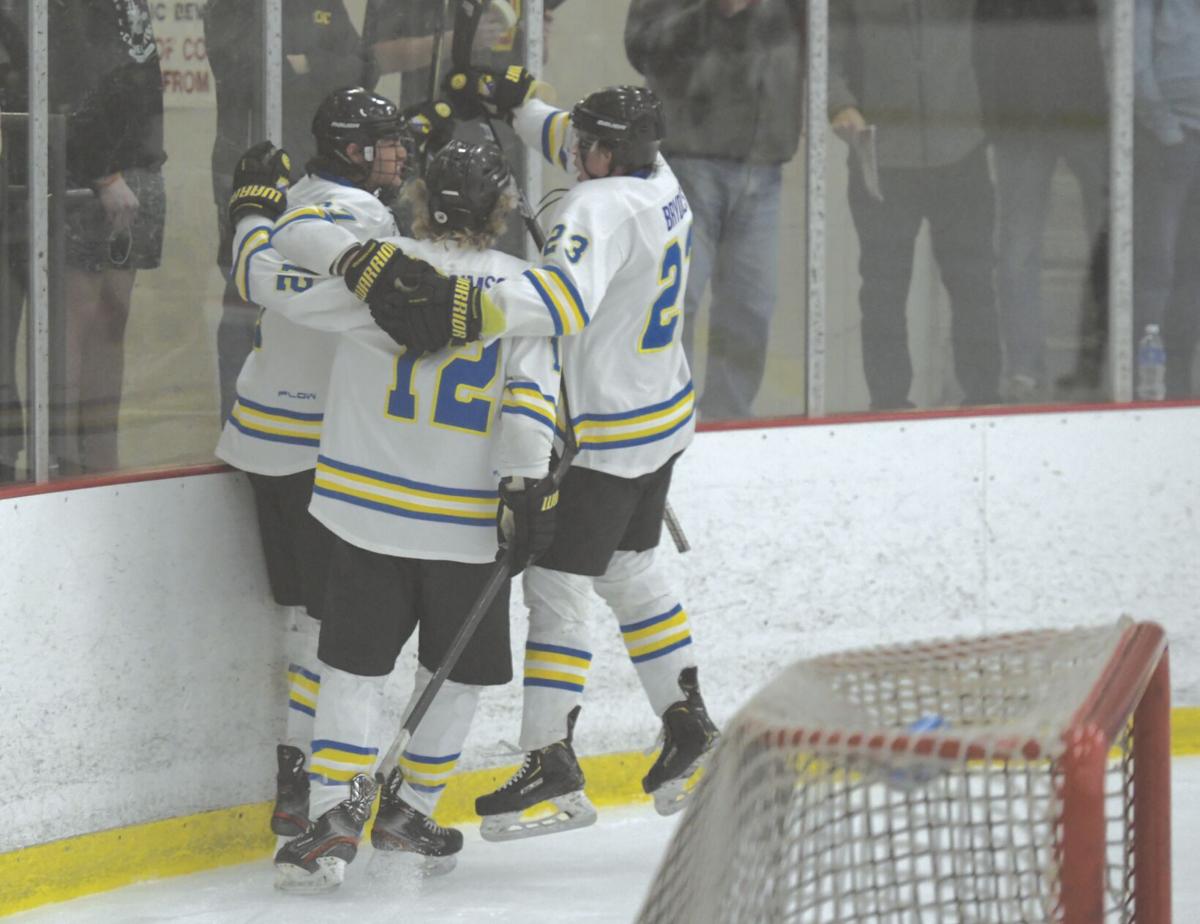 NA3HL Sheridan Hawks forwards Teejay Torgrimson (12) and Zach Brydges (23) hug Luke Desmarais after he scored to give the Hawks a 1-0 lead in the second period of their game vs. North Iowa at the St. Peters Rec-Plex Friday, April 16, 2021. Desmarais scored with 7:35 left in the second period, and Sheridan maintained its lead until 4:35 of the third period. 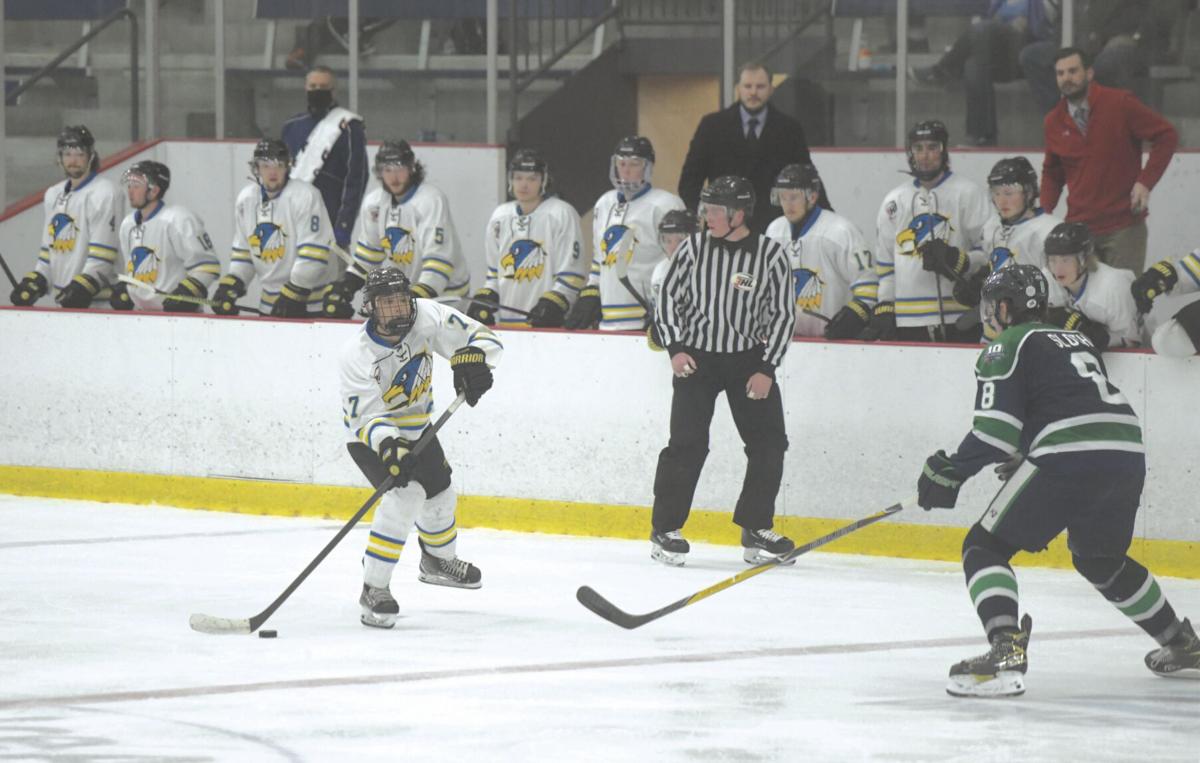 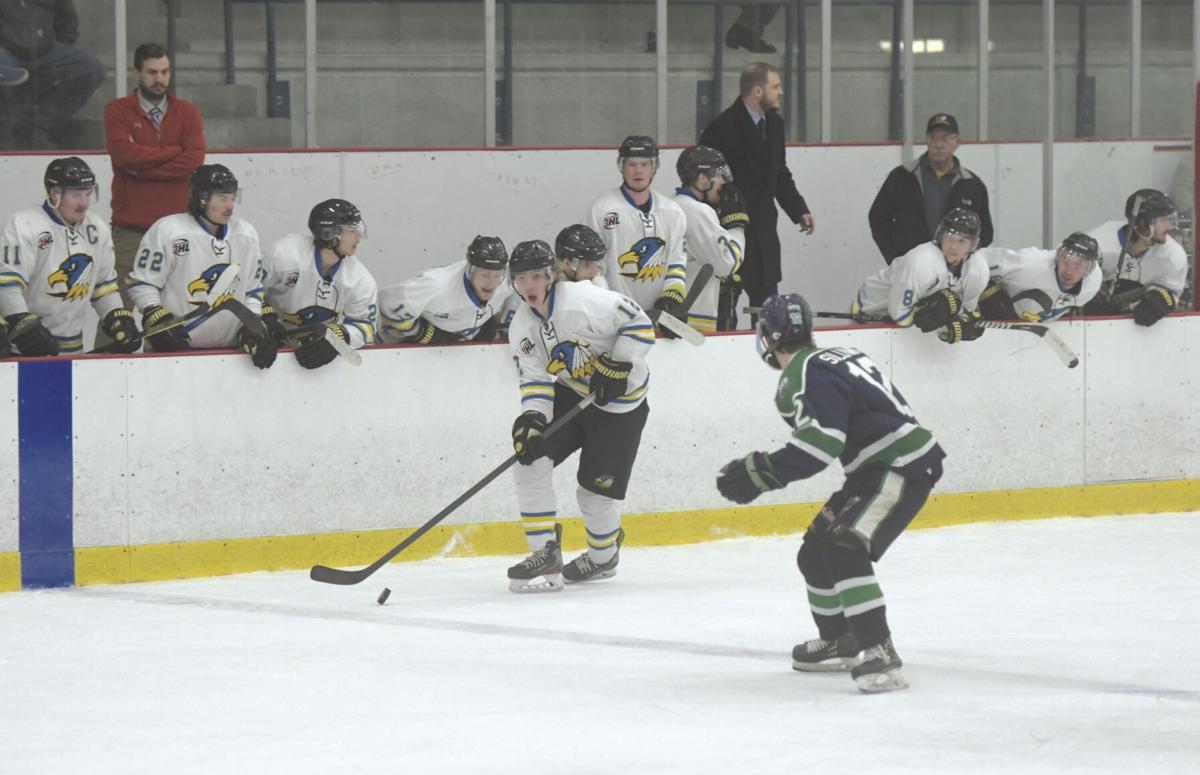 NA3HL Sheridan Hawks forwards Teejay Torgrimson (12) and Zach Brydges (23) hug Luke Desmarais after he scored to give the Hawks a 1-0 lead in the second period of their game vs. North Iowa at the St. Peters Rec-Plex Friday, April 16, 2021. Desmarais scored with 7:35 left in the second period, and Sheridan maintained its lead until 4:35 of the third period.

ST. LOUIS — A physical, defensive battle between the North American 3 Hockey League Sheridan Hawks and North Iowa Bulls ended in overtime when Bulls forward Carson Jones beat a sprawling Cristian Wong-Ramos 1 minute, 20 seconds into the 5-on-5, sudden-death period. After a 0-0 stalemate at the end of the first period, heroics from Sheridan forward Luke Desmarais in the second and a Jones goal to tie it in the third, Jones’ overtime goal didn’t feel like a fitting end to the back-and-forth contest.

“We still played hard, but it was a defensive battle more than an offensive battle,” assistant coach Chad Bailey said. “Most of our games are offensive-offensive, but we hunkered down and got to overtime, and they just got the last break. That was it.”

With the loss, Sheridan ends its round-robin play in the Fraser Cup national tournament with a 1-1 record ahead of the semifinals Sunday. The Hawks are all but guaranteed a spot, unless the Northeast Generals beat North Iowa by 11 goals or more Saturday.

“I couldn’t be more proud of [the guys],” Bailey said. “They gave it everything they had. They didn’t have anything left on the table, and we’re going to be back Sunday for more.”

The Hawks and Bulls matchup resembled nothing of Sheridan’s record-setting 13-2 win over the Northeast Generals Thursday, as the teams played to a 0-0 tie through the first period. Surviving an early North Iowa 5-on-3 power play, a perfect penalty kill and timely saves from Wong-Ramos helped keep the contest scoreless.

Sheridan’s characteristic speed showed in spurts, though North Iowa slowed the Hawks’ breakouts in the neutral zone. At the other end of the ice, the Bulls staked out in their offensive zone and forced the Hawks to collapse defensively at times, though blocked shots and Wong-Ramos rescued Sheridan repeatedly.

In a testament to the narrow offensive advantage, the Bulls outshot the Hawks 24-19 through 20 minutes of play.

Sheridan adjusted to North Iowa’s physicality in the second period, lowering their shoulders and winning board battles to create more space than they had in the first 20 minutes of play. Their effort came to fruition 12:35 into the second frame when defenseman Simon Herz took a shot from the left point that forward Zach Brydges attempted to tip past the Bulls’ goaltender Carsen Stokes.

Though Brydges’ shot didn’t beat Stokes, a waiting Desmarias snapped a shot into the open left side of the net to put the Hawks up 1-0. Sheridan buckled down for the remainder of the period to maintain its one-goal lead.

The 1-0 advantage was short lived, however, as Jones wristed a shot from just inside the right faceoff circle 4:25 into the third period to beat Wong-Ramos blocker side. Neither team found an edge for the remainder of the period, as the entirety of the Hawks team blocked shots and hustled to loose pucks in a testament to their compete-level and determination.

A 5-on-5, 10-minute overtime period was needed to break the stalemate, though Jones only needed 1:20 to end the game. He dangled through the slot and beat a sprawling Wong-Ramos with a backhander through traffic for the game-winner.

Wong-Ramos stopped 45 of the 47 shots he faced, while Stokes made 40 saves on 41 shots from the Hawks. Sheridan finished 5-for-5 on the penalty kill, but couldn’t capitalize on two power plays in the first and second periods.

Sheridan will likely play in the semifinals Sunday, though their seeding and opponent will be determined by Saturday’s Fraser Cup games.