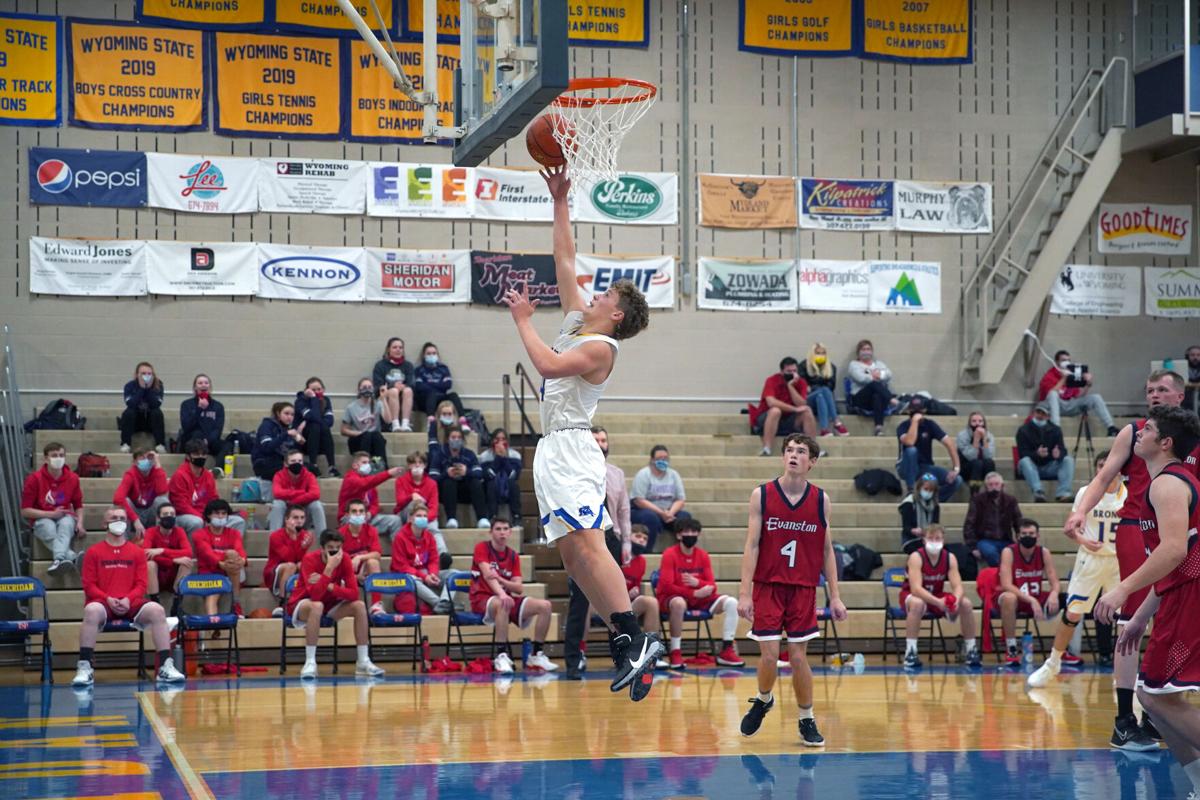 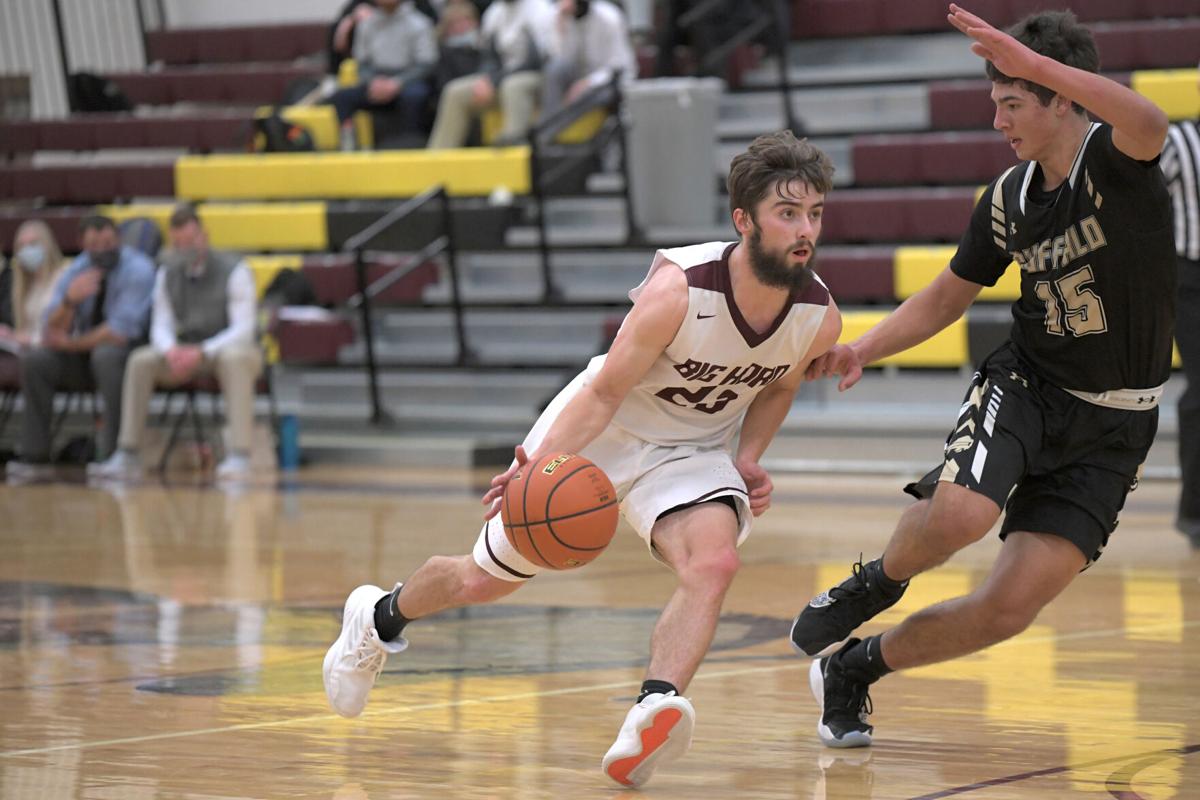 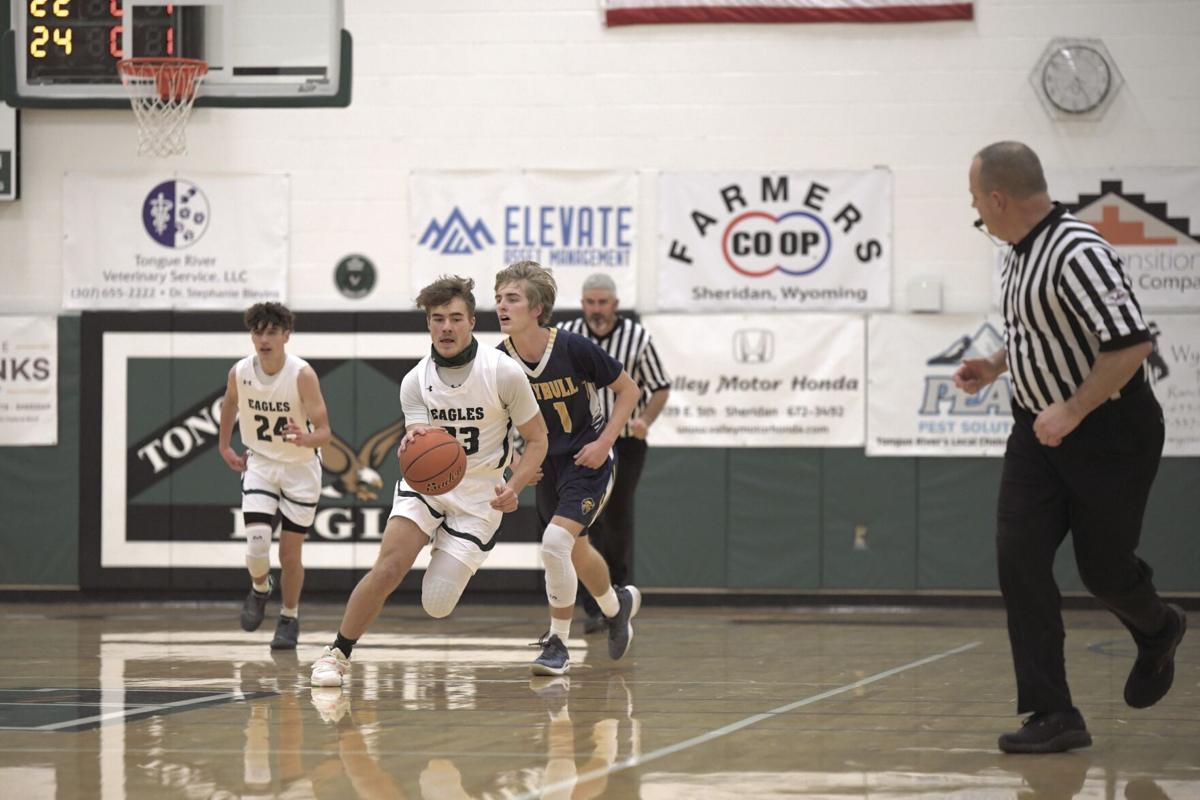 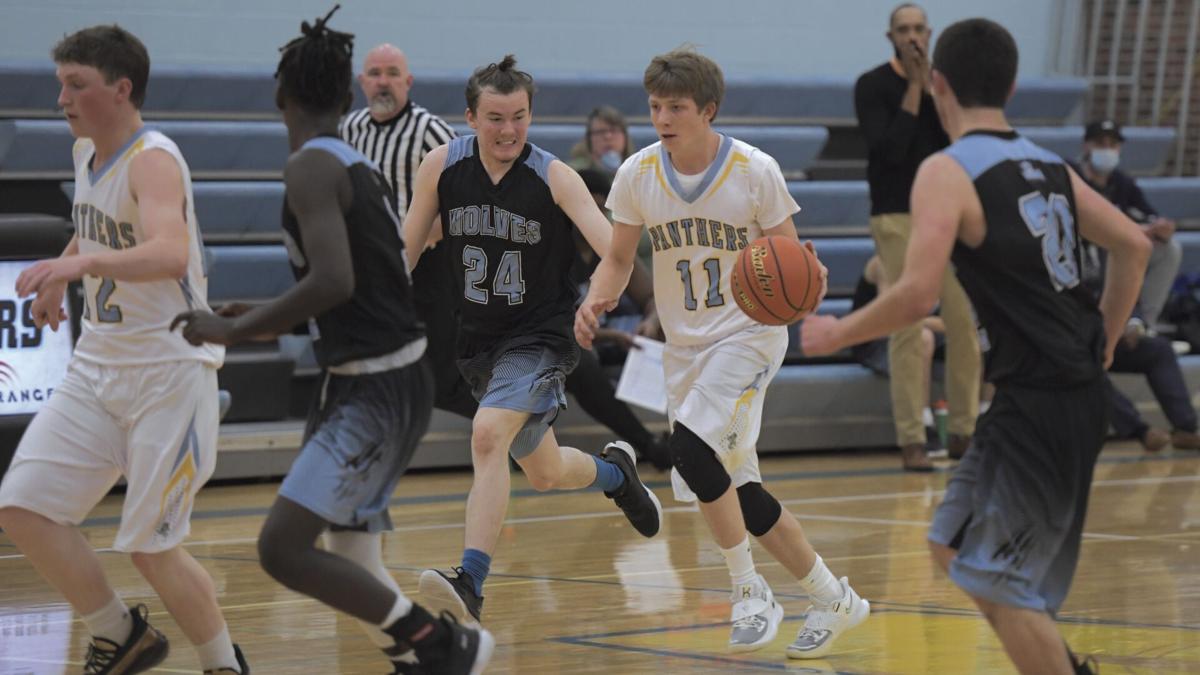 Emily Simanskis | The Sheridan Press Arvada-Clearmont’s senior Cameron Klatt dribbles up the floor during the Panthers’ game vs. NSI Academy Thursday, Dec. 17, 2020. Klatt and three other seniors along with two juniors and three freshmen create a balanced Arvada-Clearmont team this season.

Emily Simanskis | The Sheridan Press Arvada-Clearmont’s senior Cameron Klatt dribbles up the floor during the Panthers’ game vs. NSI Academy Thursday, Dec. 17, 2020. Klatt and three other seniors along with two juniors and three freshmen create a balanced Arvada-Clearmont team this season.

SHERIDAN — The Sheridan Broncs have something to prove after their championship dream died when COVID-19 caused the cancellation of the 4A State Championship Tournament last year as the boys basketball team loaded their buses.

Though the county’s four boys basketball programs will attempt to reach its championship goals in a variety of ways with varying levels of athlete talent and experience, through Jan. 4, Sheridan and Tongue River boast undefeated records, while Big Horn and Arvada-Clearmont sit at .500. The strong starts through two weeks of competition reflect the teams’ offseason efforts and general excitement surrounding the return to the basketball court.

The Sheridan Broncs filled their open gyms, running four courts at once, as head coach Jeff Martini noted seeing the most athletes he’s ever seen at the preseason pickup games.

“I think one of the things we’re really going to focus on is to push these kids to really embrace the opportunity to play,” Martini said. “… We have to attack each day like it might be our last because it could be our last.”

Aside from the student-athletes’ parents, a limited pep band and the Broncs’ cheerleaders, spectators are not allowed in Sheridan’s gyms and capacity limitations prohibit more than 100 fans from attending any of the county’s games. But the basketball players express gratitude for the opportunity to compete at all — “awesome,” “nice,” “great” were the adjectives of choice to describe the feeling accompanying the start of basketball season.

For the Broncs, who finished last season with a 15-8 record and 5-1 Northeast quadrant record, their strength resides in their depth. The beginning of Sheridan’s 2020-21 season brought solid performances from nine players who have earned double-digit point totals through the Broncs’ 3-0 start. Martini often taps three to four players at once to check in at the scorers table when making substitutions.

“Being another point guard on the other team would be really tough because you’ve got one wave coming in, then another wave and another wave — there’s never a break,” Martini said after Sheridan’s game against Riverton Dec. 12. “I’ve been really excited about the depth and the intensity our kids are playing with.”

Additionally, senior Rance Beck, a transfer student-athlete from Colorado, serves as a post player for whenever Lecholat grows fatigued. The Broncs hope to improve upon or match the 4A’s fifth-best scoring and shooting performances from last year and first-place rebounding efforts.

“We talk about it in the locker room all the time, it’s either going to be make or break this year,” Sinclair said. “I think we’re a close group of guys. If we keep it up and keep working on it and rotating guys in, it will be really beneficial for us.”

The Tongue River Eagles see similar strength in their depth through a 4-0 start to the season despite losing seven seniors. Hanson witnessed an innate drive toward improvement in the Eagles coupled with coachable tendencies prior to the start of Tongue River’s season and, after four contests, seven Eagles recorded double-digit point totals.

“We’re playing anywhere from eight to 10 to 12 guys in any given situation,” Hanson said. “Having guys you know you can count on, depending on the situation, is huge. There’s a reason why it’s called a team sport — it takes way more than one guy and way more than five guys. It takes a whole lot of them to get it done. … It’s good to have depth, for sure.”

Regardless of experience, Hanson and senior Sam Patterson saw both the younger players and program veterans direct their energy during the preseason toward whatever role they fill on the team. Epitomized in Hanson’s “day by day getting better and better until we can’t be beat” motto, which breaks down the end-of-practice huddle, Tongue River looks poised to improve upon its 14-13 (3-3 Northwest quad) record and first-round 2A State Championship Tournament exit from last season.

“There’s a lot of try in everybody, and the intensity is up,” Patterson said after Tongue River’s first week of practice.

During the Eagles early practices, Hanson harped on defensive play, while making the offense more effective with the ball. Tongue River’s cross-county rival Big Horn Rams similarly look to build its game from the defensive side of the court, as first-year head coach Cody Ball takes over for longtime head coach Mike Daley.

The former Sheridan College men’s basketball coach Ball served as the Ram’s assistant cross-country coach in the fall and itched to get back to the court before Sheridan County School District 1 officially hired Ball in October.

“I couldn’t hardly sleep,” Ball said about the night before Big Horn’s first practice. “I couldn’t wait to get out here, and it was fun.”

Ball’s athletes have taken to their new coach, despite early season setbacks. An 0-2 start against class 3A teams caused doubt to creep into the Rams’ locker room, but back-to-back 2A wins and a thrilling buzzer-beater from junior Cade Butler before the holiday break instilled confidence in Big Horn’s new system.

“He doesn’t take mediocrity and really pushes us to be our best,” senior Carson Bates said.

The Rams won the 2A East Regional Tournament last season with its 18-8 (5-1 Northeast quadrant) record and placed third at the 2A State Tournament. This year, Big Horn rosters a mix of experience from seniors James Richards and Bates and younger talent from Schons and Butler, which excites its athletes and coaching staff.

“We have all the parts we need,” Ball said. “We have some special players here. I think we have a really good chance in 2A. … We have a ton of potential here, and I’m excited for it.”

Arvada-Clearmont head coach Cameron Spade sees similar potential in his team’s ability to spread the floor and use its creativity on offense, as four seniors lead a nine-man team. The Panthers have two juniors and three freshmen making up the rest of their roster, and the group understands their positions as role players, as they look to improve on their 2019-20 season finish.

“We’re not extremely big, but we’re pretty quick,” Spade said. “We’ve got skilled players who can handle the ball, some guys who can drive inside and score and then we’ve got a lot of guys around them who can do certain things.”

In the Panthers’ season-opening win against NSI Academy, seniors Cameron Klatt and Torrey Veach finished with 41 and 28 points, respectively — a sign of what’s to come from the Arvada-Clearmont team.

“We’re good in our own spots,” Klatt said, “so we can work well and utilize the court very well.”

The Panthers ended last season with a 4-15 (2-8 Northeast quad) record and their best statistic came in the 1A’s rebounding rankings, as Klatt said the team’s athleticism and chemistry should lead to improvements on the offensive and defensive sides of the ball.

With the New Year comes the grind of a two-month stretch of nonstop basketball for the Broncs, Eagles, Rams and Panthers, and 2021 brings the promise of a postseason tournament that felt much longer than a year away last March and much sooner now that the calendar’s flipped.

And the county’s teams all have something to prove.