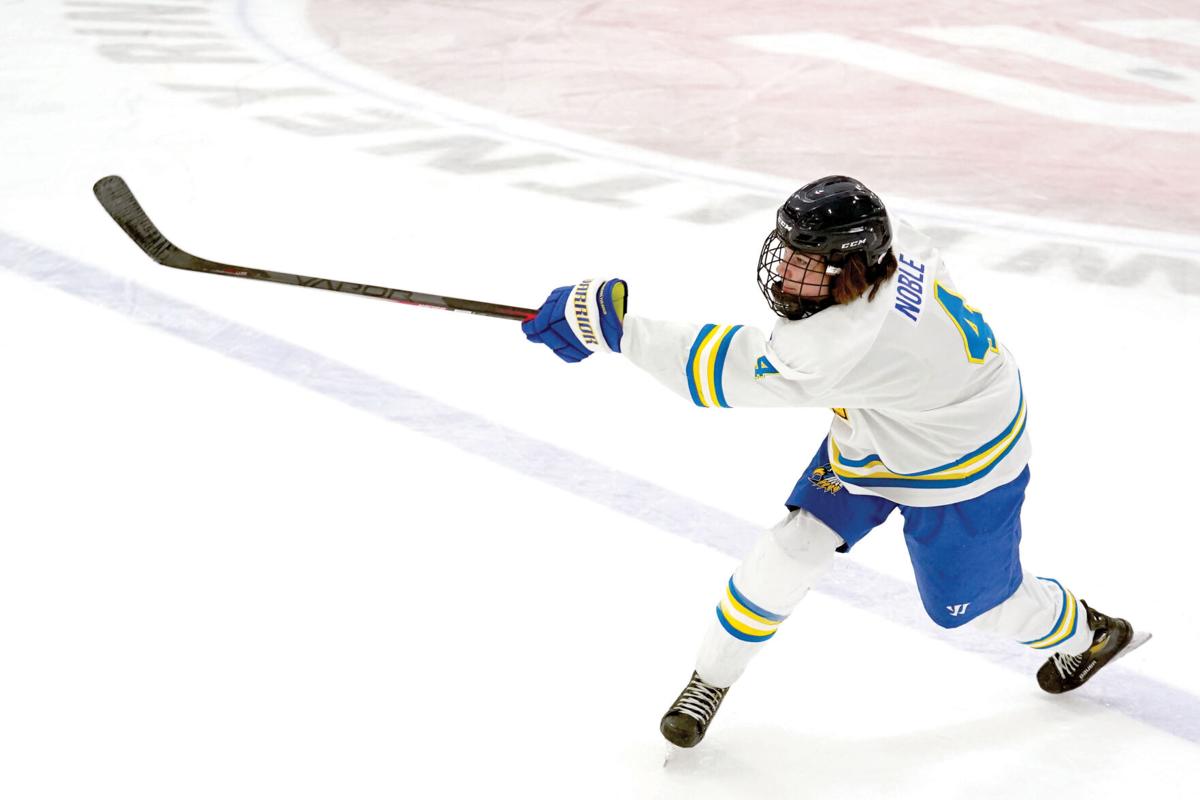 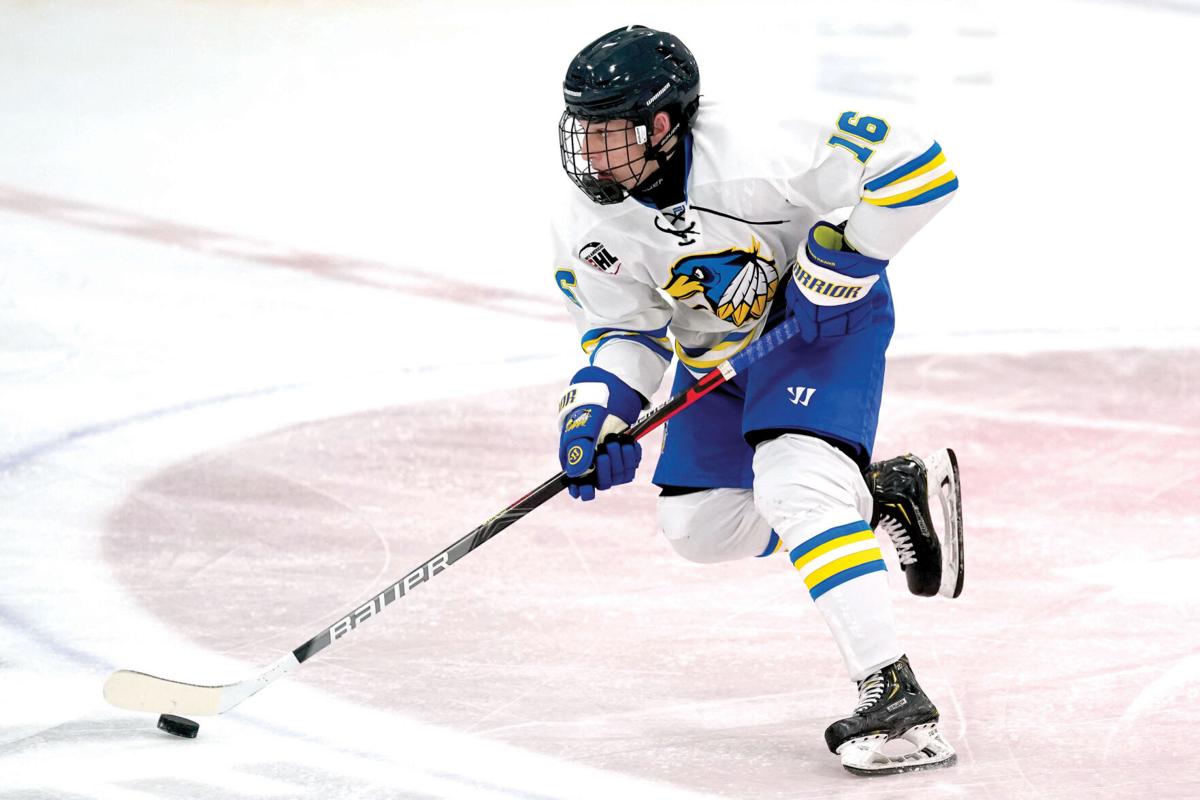 The NA3HL Hawks' Mason Friedricks (16) races across center ice on a breakaway against Bozeman Friday, Nov. 19, 2021. The Hawks lost to Bozeman 6-1. 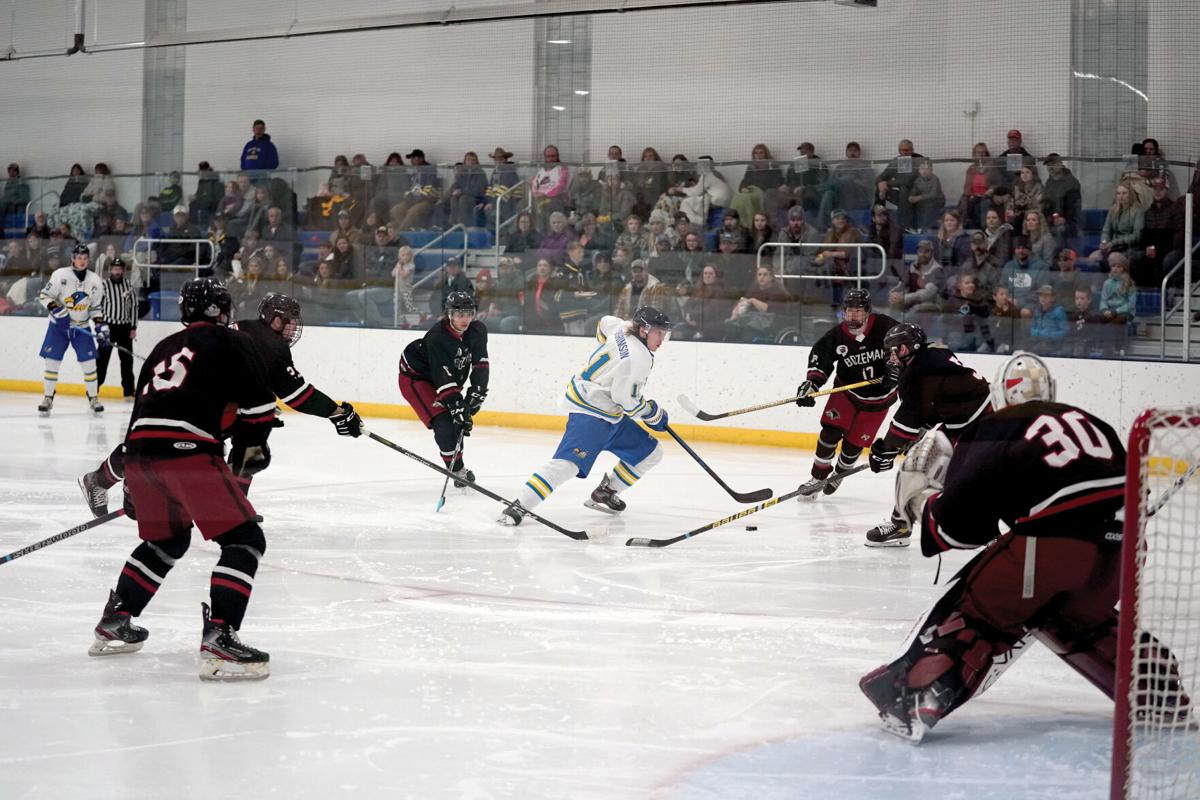 The NA3HL Hawks' Mason Friedricks (16) races across center ice on a breakaway against Bozeman Friday, Nov. 19, 2021. The Hawks lost to Bozeman 6-1.

SHERIDAN — Five lackluster periods. Then, one pretty good one.

That is Andy Scheib’s quick and easy summary of his Sheridan Hawks’ weekend, in which they were swept by the Bozeman Icedogs at the Whitney Rink in the M&M’s Center.

Friday night, the Hawks stayed scoreless until only 13 seconds remained in the game, losing 6-1. Saturday looked the same for the first two periods before Sheridan showed some buzz in the final minutes. The progress wasn’t profound enough to stop a 6-3 loss, though.

“The issue is you can’t have one period out of six,” Scheib, Sheridan’s third-year head coach, said Saturday. “If we’re going to play, we at least need to get three to give ourselves a chance.”

The Hawks didn’t give themselves a chance either night, digging big deficits in both contests against Bozeman. They fell behind 6-0 Friday and 4-0 Saturday.

Forward Caden McDonald said the first goal is always the hardest to score.

“100%,” he said. But when you nab that first one, “it sparks the whole bench. After you get the first goal, everyone wants to get another and keep working. It helps the team out.”

McDonald sat out Friday’s game with a concussion and was sorely missed. He struck for two third-period goals in his return game Saturday to tie forward Makhai Sparks for the team lead with 11.

“From where he started at the beginning of the year to where he is now, he’s one of those kids that, if you were giving out a ‘Most Improved’ award, he would get it,” Scheib said. “He works hard every day. He shows up. He’s a big part to our team.”

But McDonald wasn’t the only one missing. Forward Taylor Frerichs skipped all weekend with a bum ankle. Forward Teejay Torgrimson is dealing with a separated shoulder. Defenseman Nick Tigges hurt his knee Friday.

With injuries and other issues, Scheib chalked up Friday’s loss as just one of those nights for the Hawks. They were outshot 57-20 by the Icedogs.

Bozeman dominated time in its offensive zone in the first two periods and again limited the Hawks’ shot total.

The Icedogs tallied a goal in the first and three goals in the second before Sparks woke Sheridan up with his own point.

“Our energy started off slow in the first and second,” McDonald said. “We pushed through it.”

Or at least tried to in the third.

McDonald opened the period with a goal and slapped in another later, but Bozeman kept up, adding two more points to its total for a 6-3 win. The final Icedogs goal came in the final two minutes, when the Hawks had pulled their goalie to push for a last-minute comeback that never materialized.

“We’re lackadaisical,” Scheib said. “We’re not really playing the way we need to play. This weekend as a whole, that’s just kind of how it was. Last weekend, I thought we competed hard. We had some injuries and some other things going on this week that kind of made it difficult. But to me, it was a poor effort on our end.”

This was the first series of the season between the Hawks and Bozeman. Sheridan now has matched up with every team in the Frontier Division. It sits in last place with a 3-19 record.

The Hawks head north next weekend for a two-game showdown with the Helena Bighorns, a first-place team with a perfect 19-0 record. Friday and Saturday’s games are slated for 7:05 p.m.