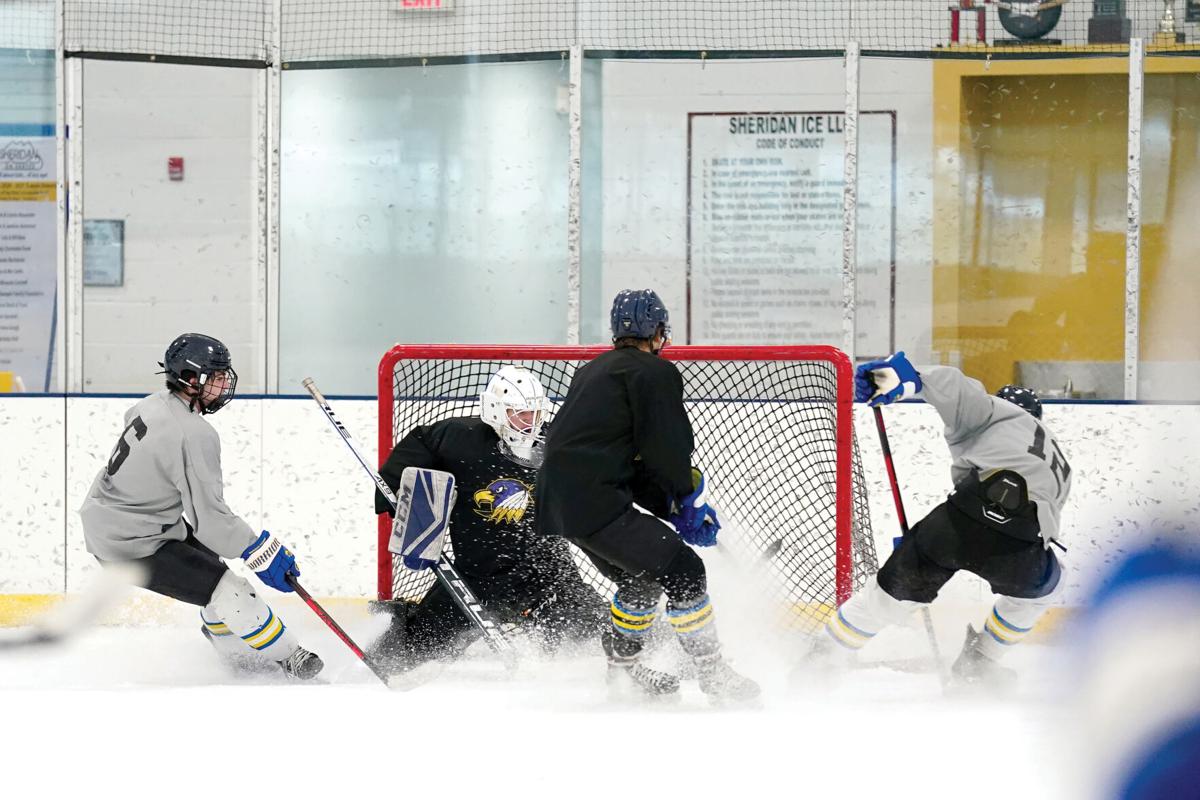 Cooper Bergman (6) makes the quick pass to Teejay Torgrimson (12) for a shot on goal during practice Tuesday, Nov. 9, 2021. This weekend, the Hawks will play at home for the first time in nearly a month. 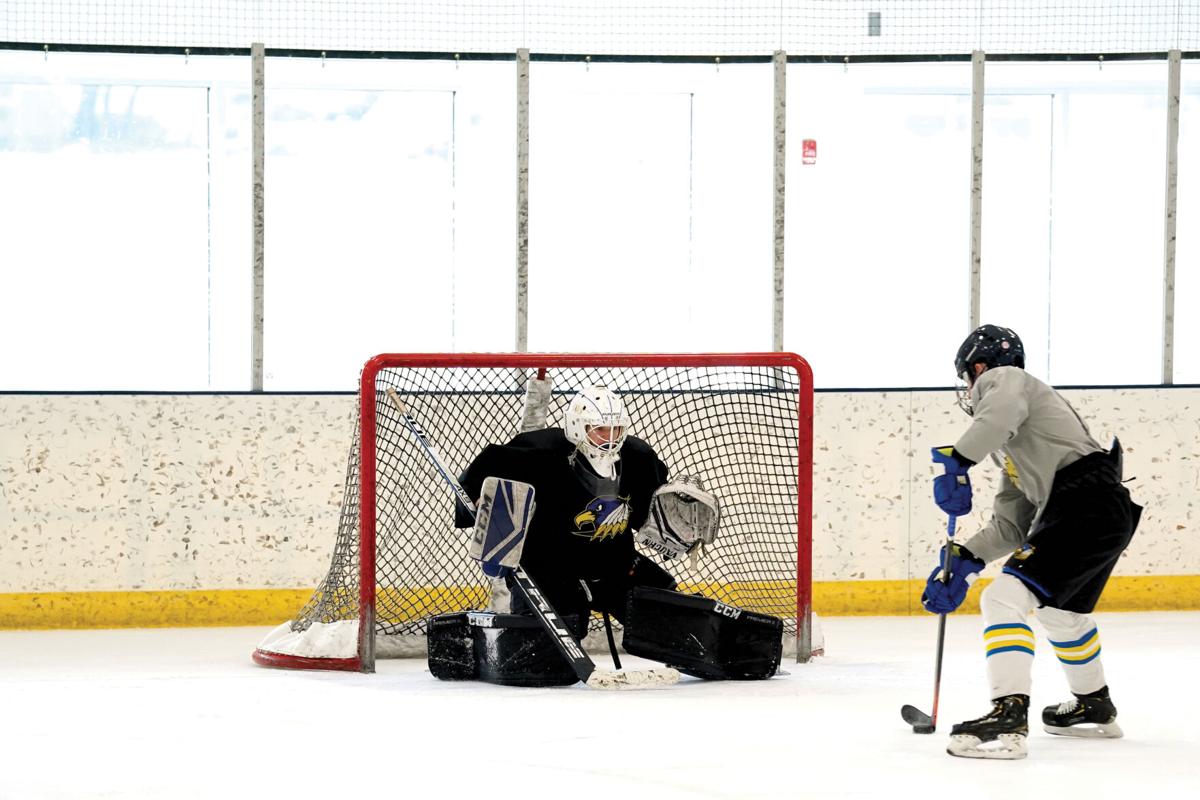 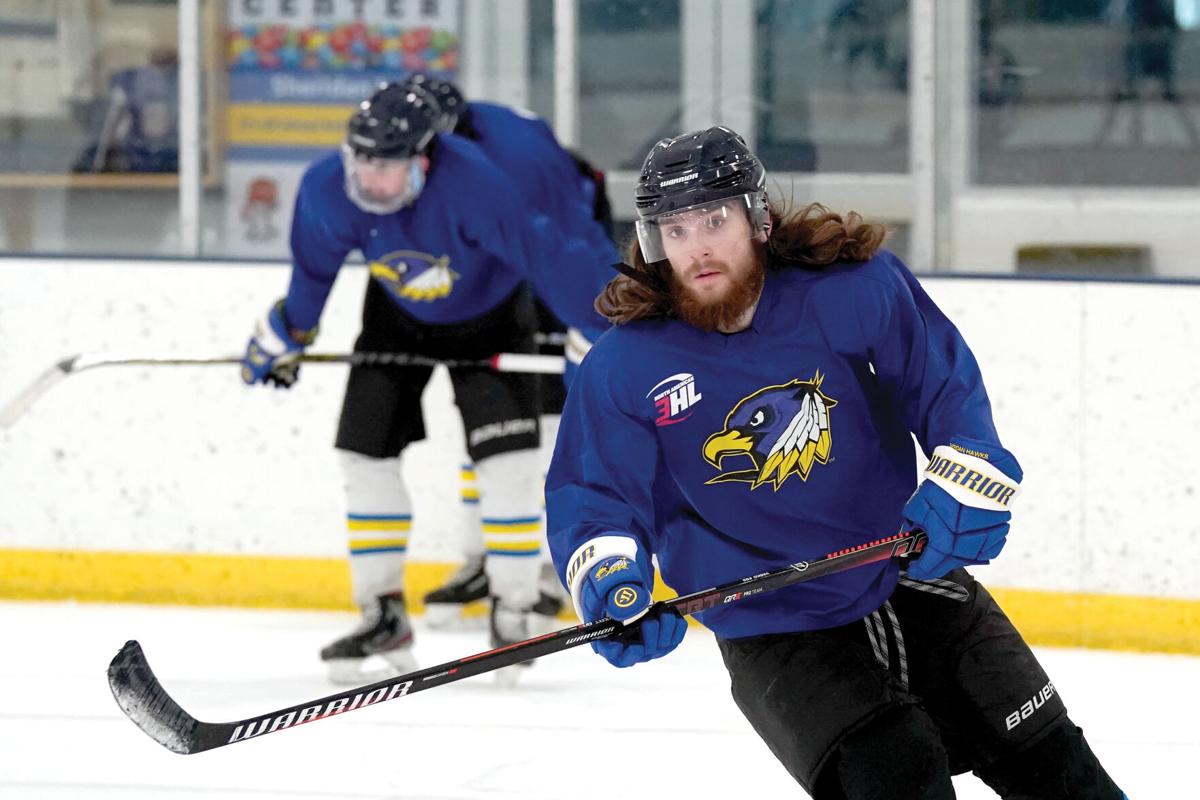 Wyatt Vasko cuts a shot turn to race back down the ice during a drill at practice Tuesday, Nov. 9, 2021. Vasko, a defenseman, has played in 18 games and scored once.

Cooper Bergman (6) makes the quick pass to Teejay Torgrimson (12) for a shot on goal during practice Tuesday, Nov. 9, 2021. This weekend, the Hawks will play at home for the first time in nearly a month.

Wyatt Vasko cuts a shot turn to race back down the ice during a drill at practice Tuesday, Nov. 9, 2021. Vasko, a defenseman, has played in 18 games and scored once.

SHERIDAN — McCaffrey Billings shook his head when thinking about the bus rides.

The three-hour trips to and from Cody. The five-and-a-half-hour trek to Great Falls, Montana, and back.

It turns out, sitting still on a bus for long periods of time while in a walking boot for a fractured ankle isn’t fun.

“Those bus drives were the worst,” Billings said.

But Billings won’t have to worry about those this weekend. He might rid himself of all three of the big things that have plagued him for nearly the last month.

The bus rides, the injury and the losing.

His Sheridan Hawks return home for their first two games at the Whitney Rink in the M&M’s Center since Oct. 15-16. They played two consecutive weekends against the Yellowstone Quake in Cody and then went to Great Falls last weekend. It was their longest stretch away from home on their schedule this season.

This Friday and Saturday, Sheridan hosts the Badlands Sabres before staying home to face Bozeman Nov. 19-20.

“It’s tougher to play on the road,” head coach Andy Scheib said. “It’s a different grind. It’s a different routine. We’re hopping on a bus and traveling and doing all those things. You have bus legs. Just the energy, just the emotion and all that is a little bit down on the road. You always try to go .500 on the road. But coming back home, it’s going to be exciting. It’s always fun to play at home.”

As for the injury, Billings suffered a fractured ankle Oct. 23 during the first Saturday of the three-series road trip. He blocked a shot with his leg against Cody and hasn’t suited up since. He’s been wearing a walking boot and carting around on a one-legged scooter.

The injury to Billings, a key defenseman in his third season with the Hawks, left a team already short on defensemen even shorter. As a result, Scheib moved Makhai Sparks, typically a forward tied for the team lead in points, to defense.

“He’s been doing well,” Billings said. “A couple guys have taken a leadership role, so it’s been good to see.”

But barring a setback, Billings will come back during the upcoming two-weekend homestand. He goes in for an X-ray Wednesday and is hoping for good news that would put him on the ice as soon as Friday.

The third bullet point — the losing — will be the hardest to handle.

The Hawks hold a 2-16 record and won only once — Oct. 29 against Yellowstone — on their last road trip. They sit in last place in the North American 3 Hockey League’s Frontier Division a season after winning it.

“Our work ethic has been lackadaisical,” Scheib said. “We put in the work for 20 minutes, and then, we kind of slack off for 40. We have to find a way to play a full 60 to win hockey games. That’s what we’re trying to preach right now is work ethic and attitude and mentality … Realistically, we’re not bad at the x’s and o’s stuff. We’re just bad at the will and want to win.”

“If we get work ethic, we’ll be perfectly fine,” forward Taylor Frerichs added.

Badlands, Sheridan’s opponent this weekend, also enters with a losing 6-7 record. The Hawks will don special uniforms for their Military Appreciation Weekend. The game-worn jerseys will be auctioned off online afterward. All active duty and reserve military personnel and veterans will get into the games free.

“Hopefully, we’ll come out with a couple wins,” Billings said, “but we’ll see how it goes."