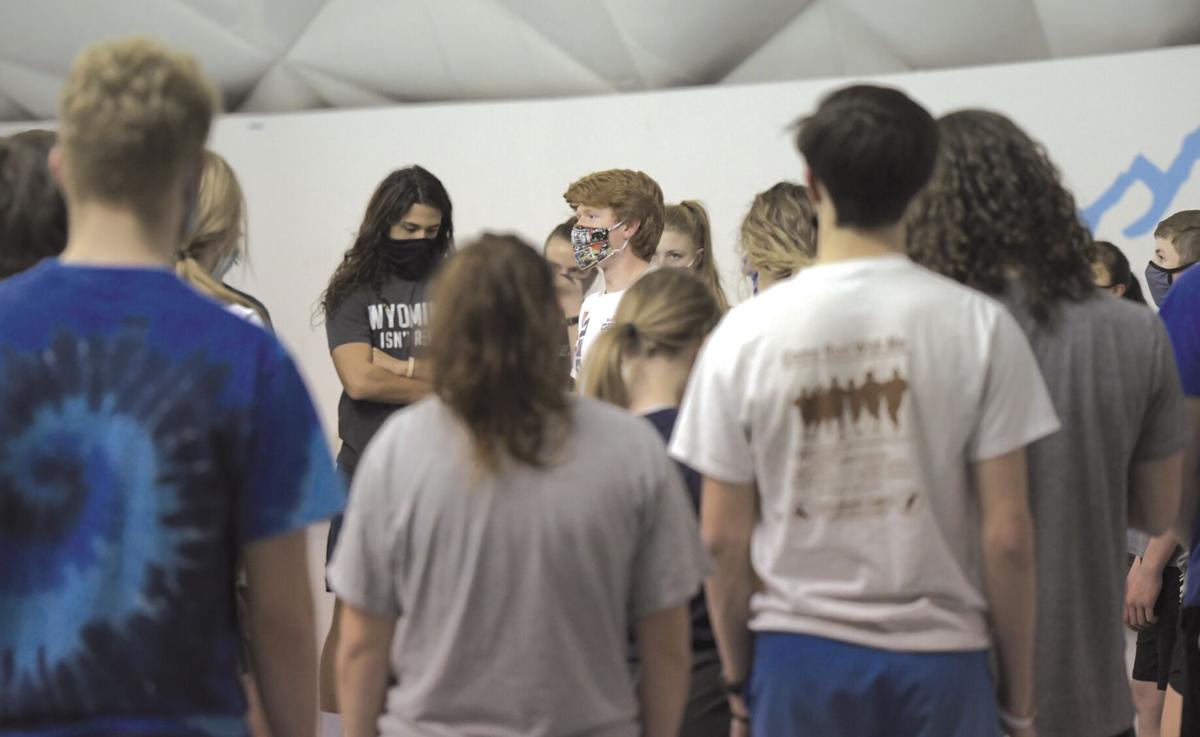 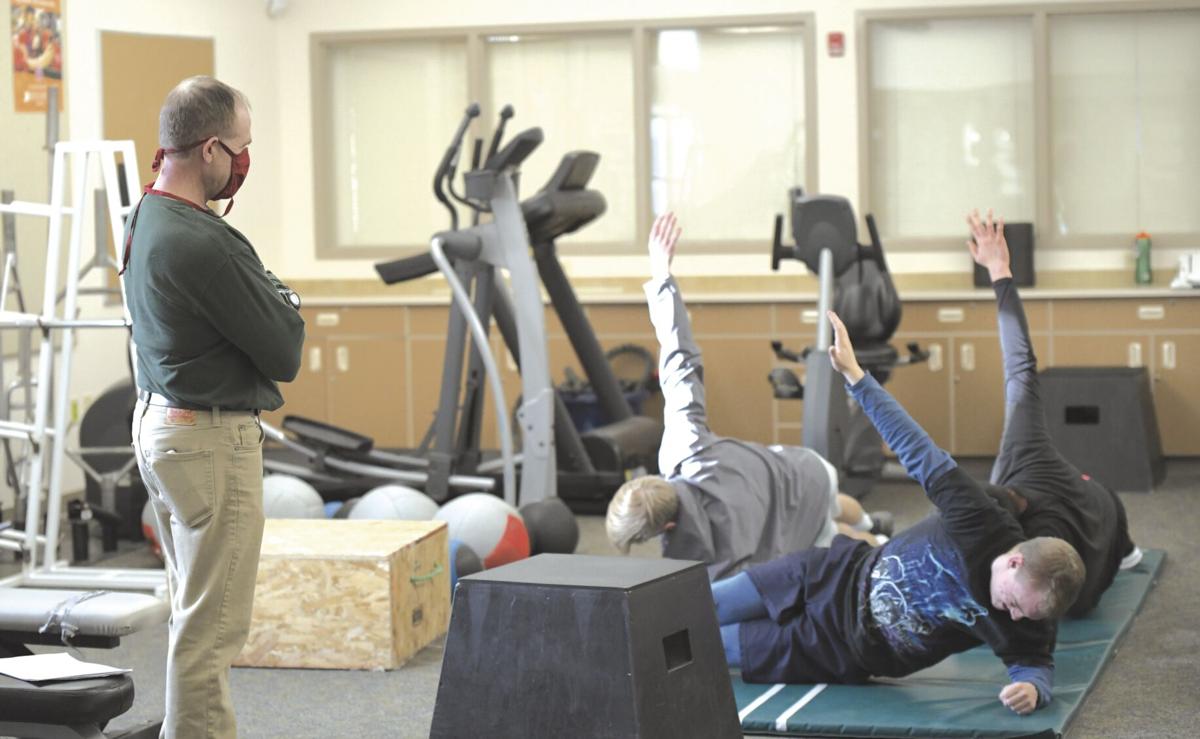 Tongue River head indoor track coach Scott Orchard, left, oversees his athletes’ workout in the weight room at Tongue River High School Tuesday, Feb. 9, 2021. The Eagles and Lady Eagles will compete in Gillette this weekend as their third and final qualifying meet for the state meet in a couple weeks. 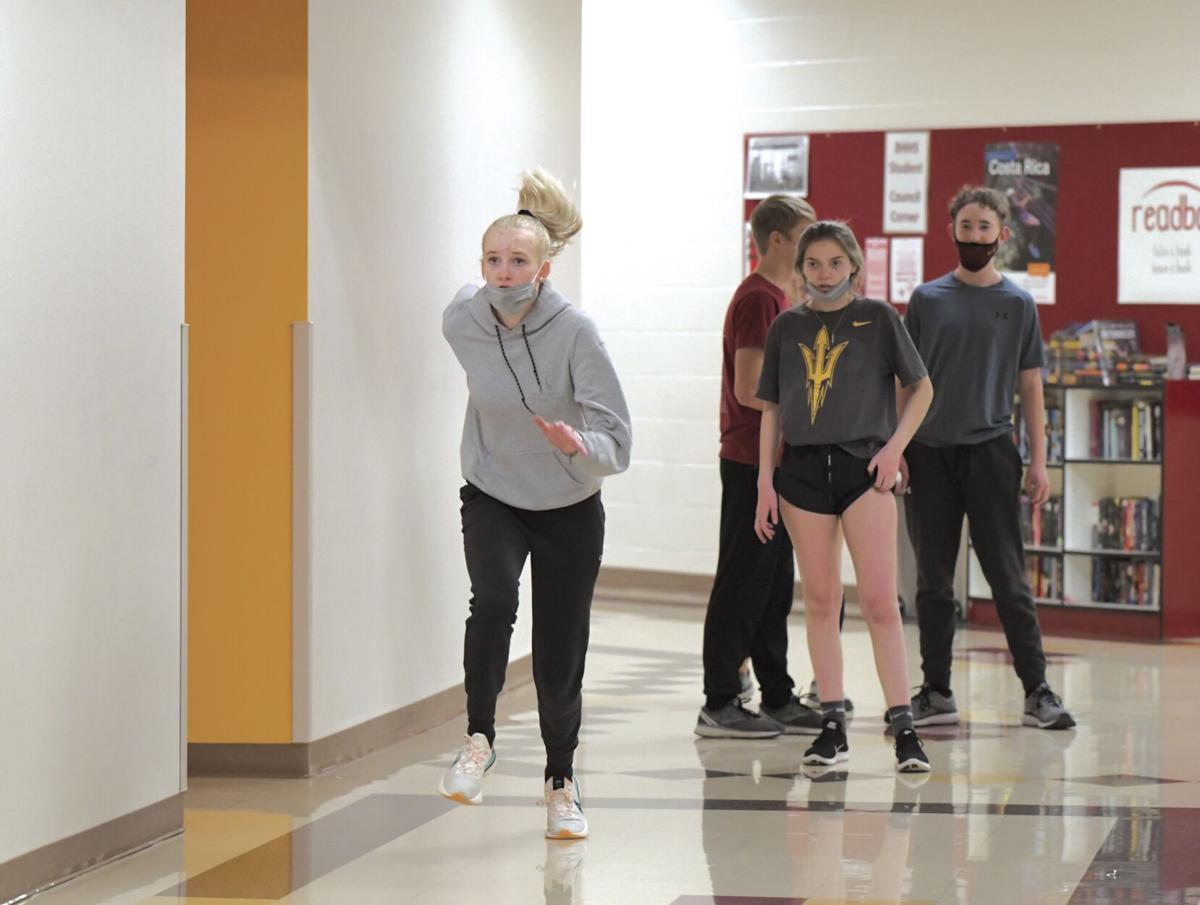 Big Horn’s Kate Mohrmann starts her sprint in the hallway of Big Horn High School during indoor track and field practice Wednesday, Feb. 10, 2021. Mohrmann and the Rams and Lady Rams consider this week a bye week before their third and final qualifying meet Feb. 20. 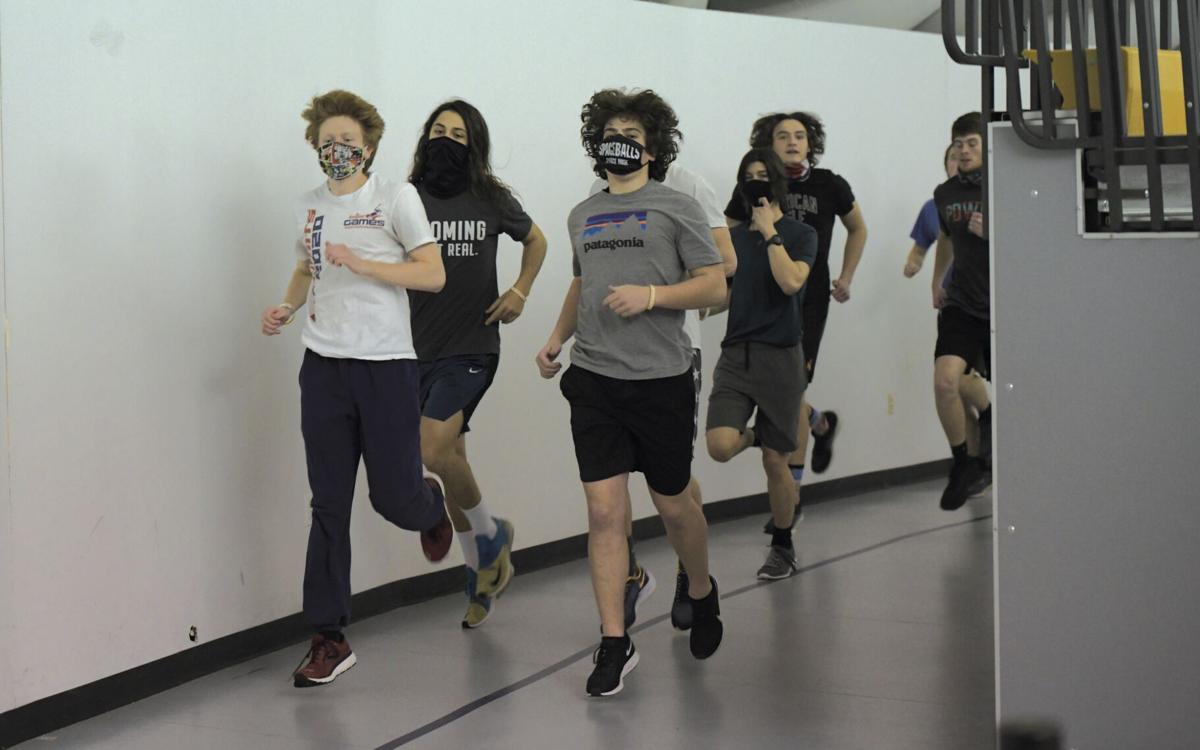 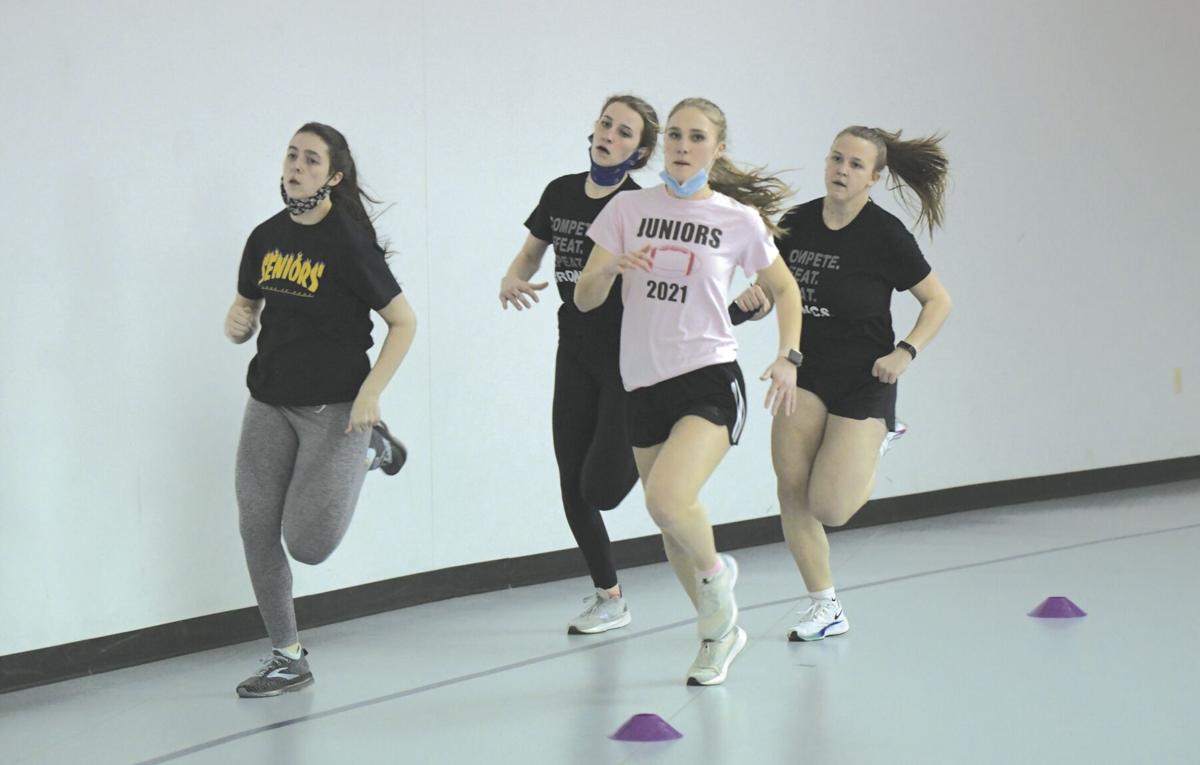 Sheridan runners, left to right, Piper O’Dell, Aria Heyneman, Catie Kuehl and Megan Hodges practice running corners at the Bruce Hoffman Golden Dome Monday, Feb. 8, 2021. “Kids are taking practices more seriously because you don’t have time to not take it seriously if you want to be great,” Hodges said. 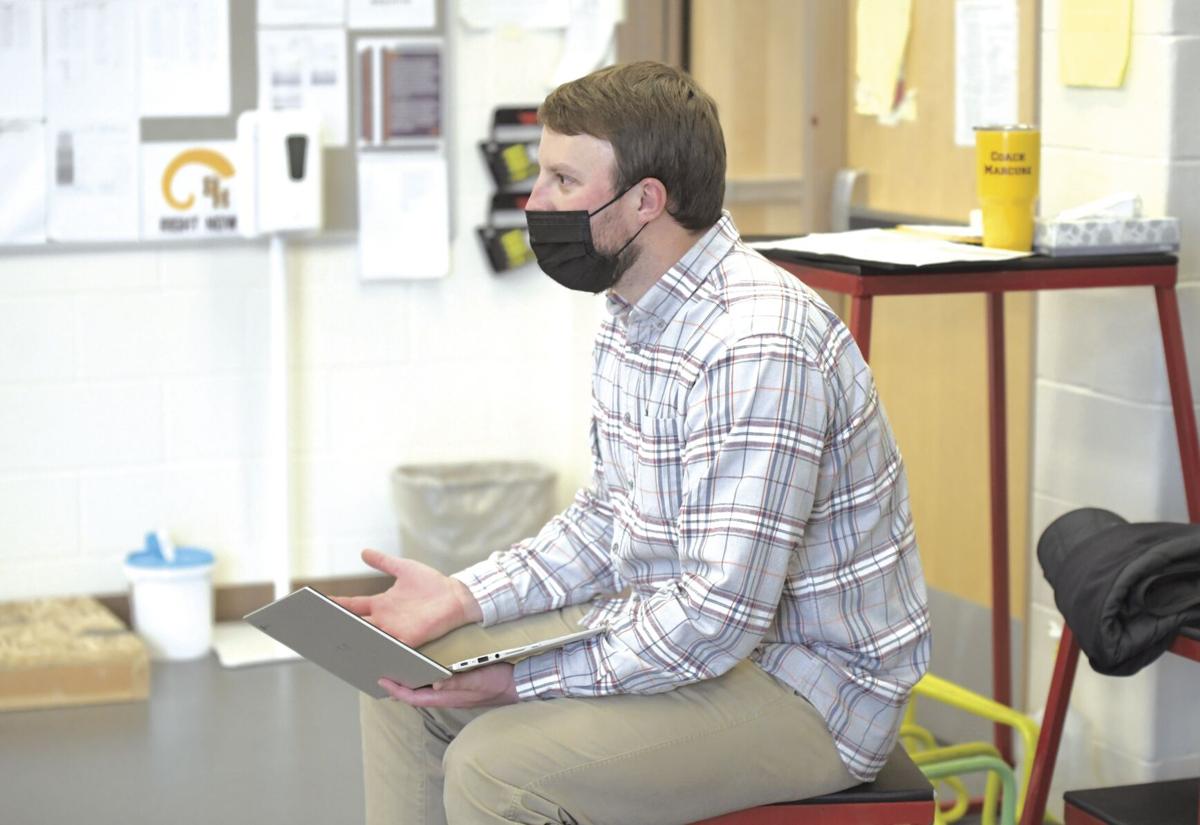 Big Horn head track coach Andrew Marcure leads a discussion about mental toughness and overcoming adversity with his team before practice Wednesday, Feb. 10, 2021. Marcure has focused on both physical and mental growth for the Rams and Lady Rams during this season.

Tongue River head indoor track coach Scott Orchard, left, oversees his athletes’ workout in the weight room at Tongue River High School Tuesday, Feb. 9, 2021. The Eagles and Lady Eagles will compete in Gillette this weekend as their third and final qualifying meet for the state meet in a couple weeks.

Big Horn’s Kate Mohrmann starts her sprint in the hallway of Big Horn High School during indoor track and field practice Wednesday, Feb. 10, 2021. Mohrmann and the Rams and Lady Rams consider this week a bye week before their third and final qualifying meet Feb. 20.

SHERIDAN — Sheridan High School track and field captain Nicholas Hale began the Broncs and Lady Broncs practice at the Bruce Hoffman Golden Dome Monday by commending the team’s support of each other at the Gillette Indoor Qualifying Meet No. 4 last Saturday.

“Good job cheering each other on,” Hale said. “And let’s keep working hard this week.”

The Wyoming High School Activities Association changed the format of the state’s indoor track and field season so that athletes have three qualifying meets each to finish the regular season in the top eight of their events to compete at the state championship meet in Gillette Feb. 27 for boys and March 6 for girls. Typically, when COVID-19 doesn’t affect the size of meets and structure of the indoor track and field season, the top four athletes from each team in each event have the opportunity to compete at the state meet in Gillette.

After five weeks of practice and weekend competition, in spite of the qualification changes, Hale’s words echoed through the Sheridan, Big Horn and Tongue River track teams’ practices this week — hard work and supporting teammates takes priority, and qualification for the state competition will come as a byproduct as the teams approach the final stretch before their potential postseason.

Sheridan competitors ‘get after it and go to work’

The ability to run in the Golden Dome to measure appropriate distances, pace workouts and practice around corners should benefit the Broncs and Lady Broncs as they prepare for the final of their three qualifying meets Feb. 20. Several Sheridan runners hold spots in the top eight as of Feb. 8, but room for improvement remains.

“We’re very excited about where we’re at,” Sheridan head coach Taylor Kelting said. “But we know we’ve got to keep going to try to get more and more kids in.”

The smaller qualifying meets, often limited to 200-300 competitors, leaves athletes feeling more encouraged after placing higher and earning points in their events for letter jacket letters. Junior Megan Hodges said an additional benefit of the smaller, no-spectator competition is the heightened support from teammates cheering each other on “like crazy” and making up for the lack of crowd noise, which Hale mentioned at the start of practice.

Hodges added she’s experienced and seen a higher degree of competition during practice because of the top eight cutoff for the state meet and Feb. 20 looming on the calendar as the last opportunity to earn one of those spots.

The Broncs and Lady Broncs use the ability to check the top eight runners online weekly at WHSAA.org as fuel during practice, Kyle Meinecke pointed out. Instead of viewing the rankings as discouraging, knowing how close a competitor is to earning a coveted spot can push Sheridan athletes just as hard as previous years.

From joking with each other and laughing during warmups and dynamic stretches, after Hale’s speech, the chatter died down and the Broncs and Lady Broncs focused on their practice for the day and acceleration through corners.

Tongue River head coach Scott Orchard sees the same commitment to the process from his athletes, and said his coaching style has changed slightly to make sure his athletes peak during their third qualifying meet this Saturday instead of the state meet, as has been the case previously.

Nevertheless, runners like junior Jane Pendergast, who has broken two Tongue River records and won a race at a qualifying meet, and teammate Maddy Hill, who ran the 400-meter dash for the first time recently, both consider their seasons successful already. The indoor competition prepares Tongue River for its outdoor season and serves as a mental challenge for the runners.

Orchard emphasizes accountability and controlling what he and the athletes can during this unprecedented season. The Eagles and Lady Eagles’ positive attitudes and commitment to workouts encourages the head coach.

“Keeping kids motivated and to work their tails off in practice has not been a challenge,” Marcure said. “The group that we have is pretty motivated, and that’s been pretty fun.”

Aside from also coaching the Big Horn athletes to their peak for the third qualifying meet Feb. 20, Marcure and assistant coach Kirk McLaughlin have focused on mental toughness and the all-around athlete. Marcure runs a Google Classroom dedicated to the Rams and Lady Rams running track and has held discussions on sleep, “why” statements and learning how to grow from moments of adversity.

During this bye week before next Saturday’s competition, Wednesday’s practice began with a discussion focused on questions the athletes had asked their parents about mental toughness and adversity, while some athletes received treatment for mid-season soreness and/or injury.

Not only has Marcure seen the Big Horn athletes respond positively to the alternatively structured season, led by senior Will Huckeba, but he notes the indoor track and field community has rallied around putting on meets in Gillette. Without as many volunteers and workers on hand to help out, coaches of all different schools stepped up to run the meet.

The collective effort within and between teams to put on a track season resonated with all three of the county’s coaches and their athletes, who continue to express their gratitude for a season.

“This is for the kids,” Marcure said. “We’re doing everything we can to make sure they get as much as they can out of the three meets. That’s been pretty awesome.”