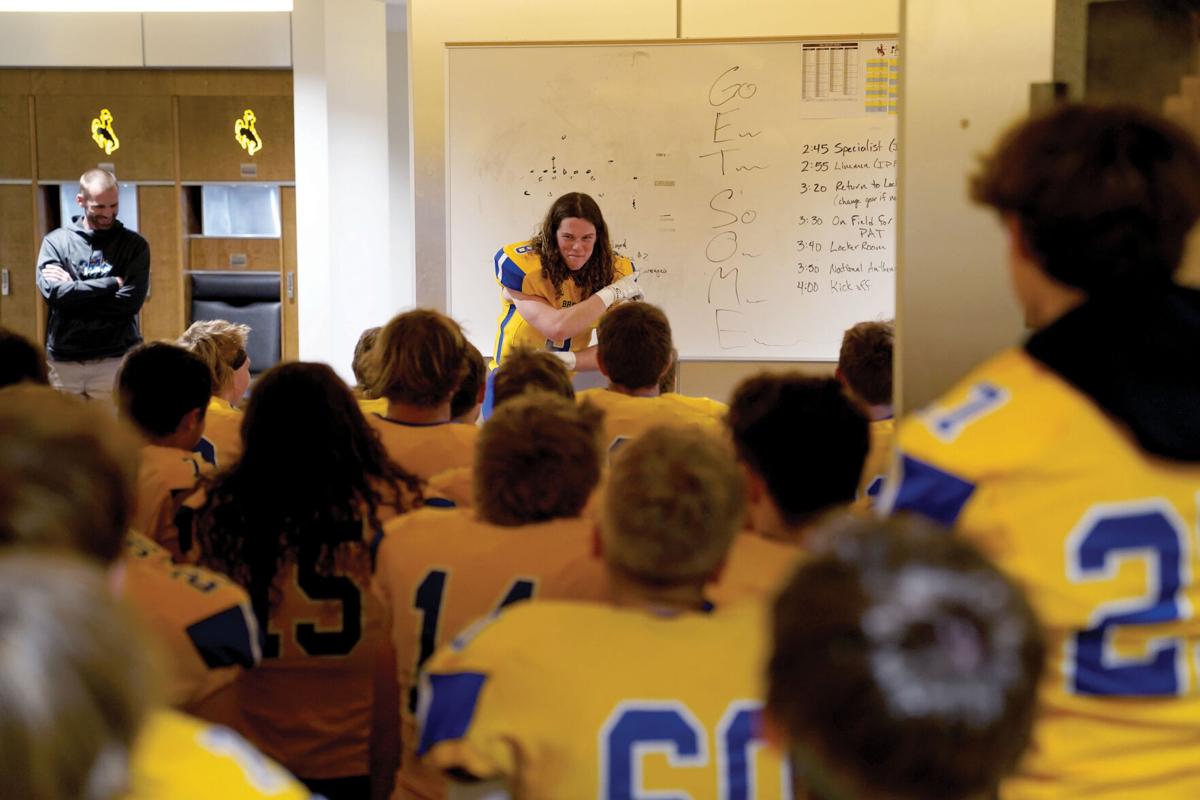 Sheridan's Carter McComb channels coach Rick Vice from "Division III: Football's Finest" with a "GET SOME" speech before the state championship game against Rock Springs Saturday, Nov. 13, 2021, at War Memorial Stadium. McComb led the Broncs in this pregame ritual all season long. 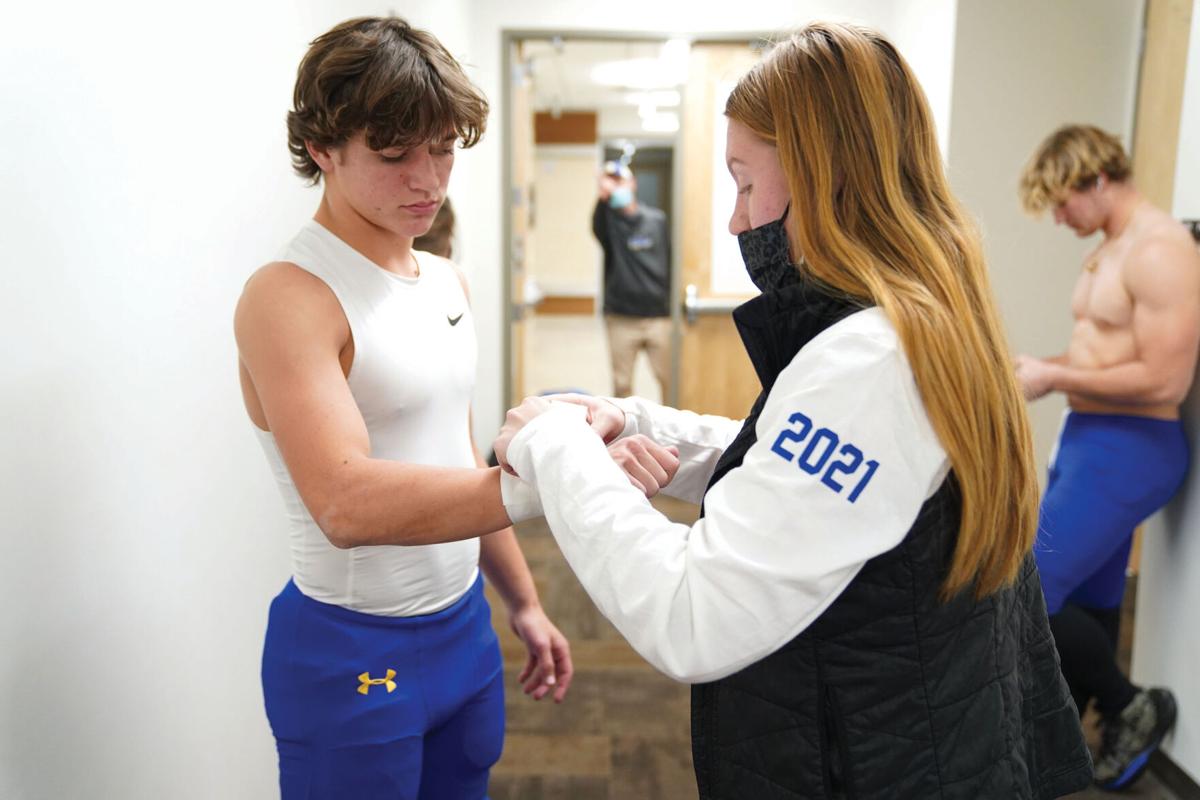 Dane Steel gets his wrists taped up before the state championship game against Rock Springs Saturday, Nov. 13, 2021. 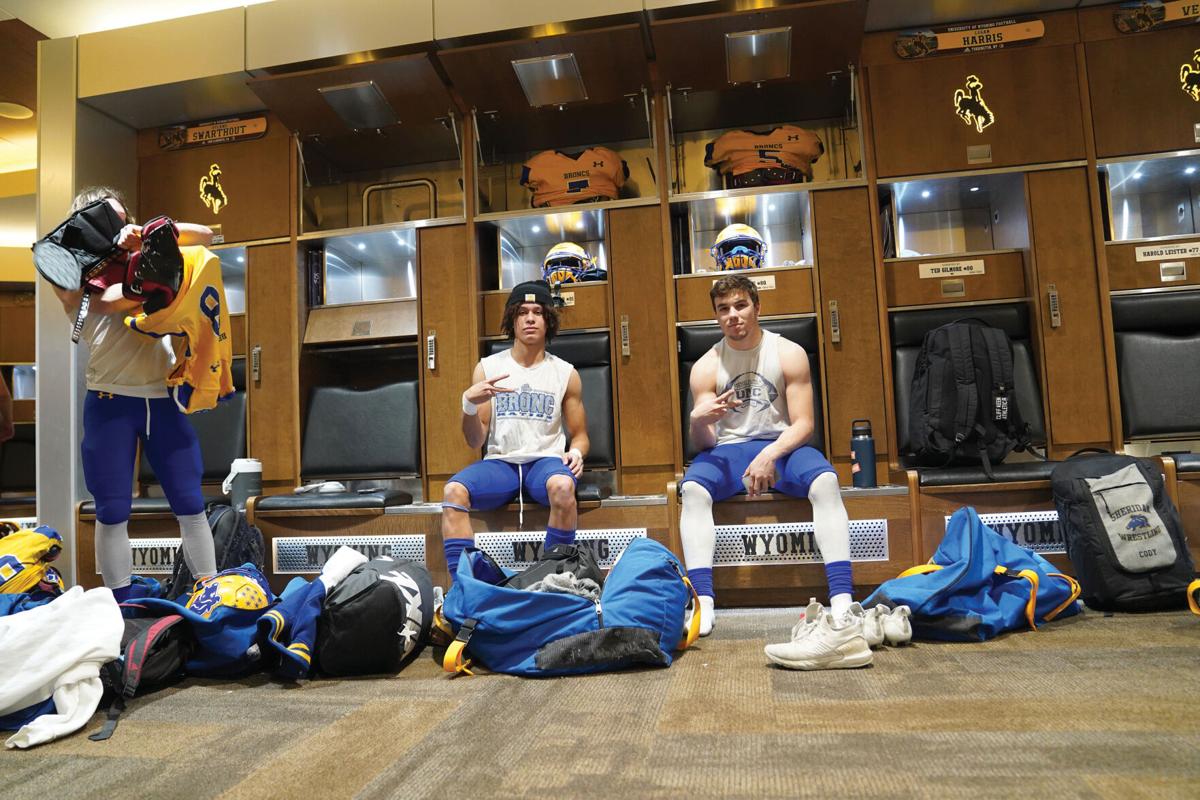 Dom Kaszas, center, and Colson Coon, right, play it cool while Carter McComb, left, suits up for the state championship game Saturday, Nov. 13, 2021. As the No. 1 seed, the Broncs got to use the University of Wyoming Cowboys' locker room. 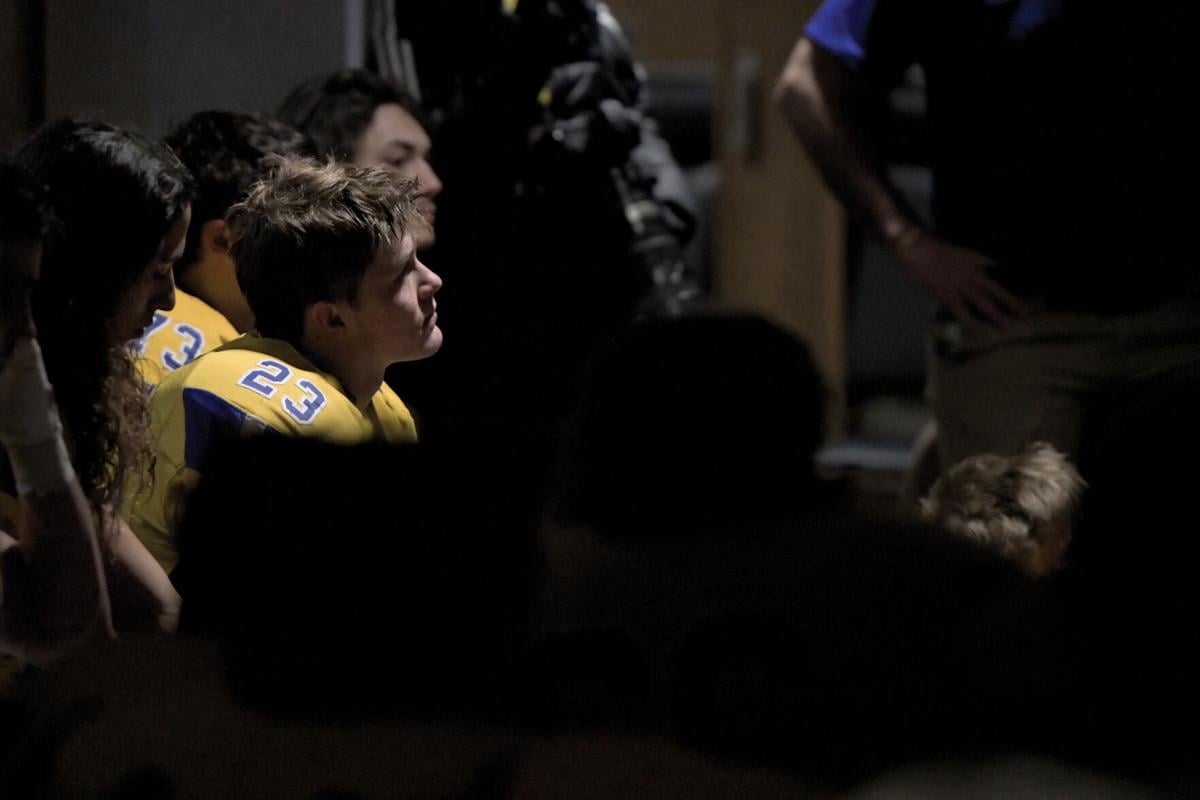 Rudy Osborne (23) listens to Sheridan's coaches as they draw plays on the whiteboard during halftime of the state championship game Saturday, Nov. 13, 2021, at War Memorial Stadium. Head coach Jeff Mowry and assistant Marshall McEwen told the Broncs they didn't have to change much. 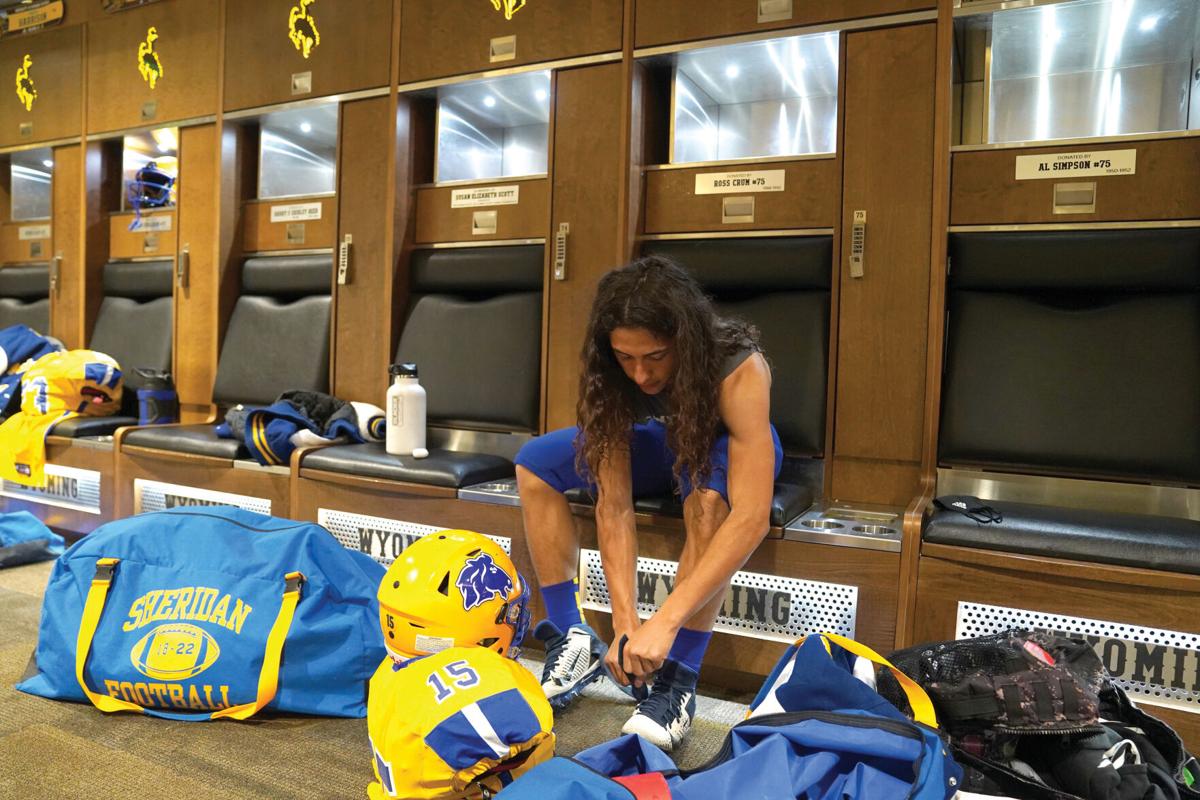 Sheridan's Carl Askins laces up his cleats in preparation for the state championship game Saturday, Nov. 13, 2021. 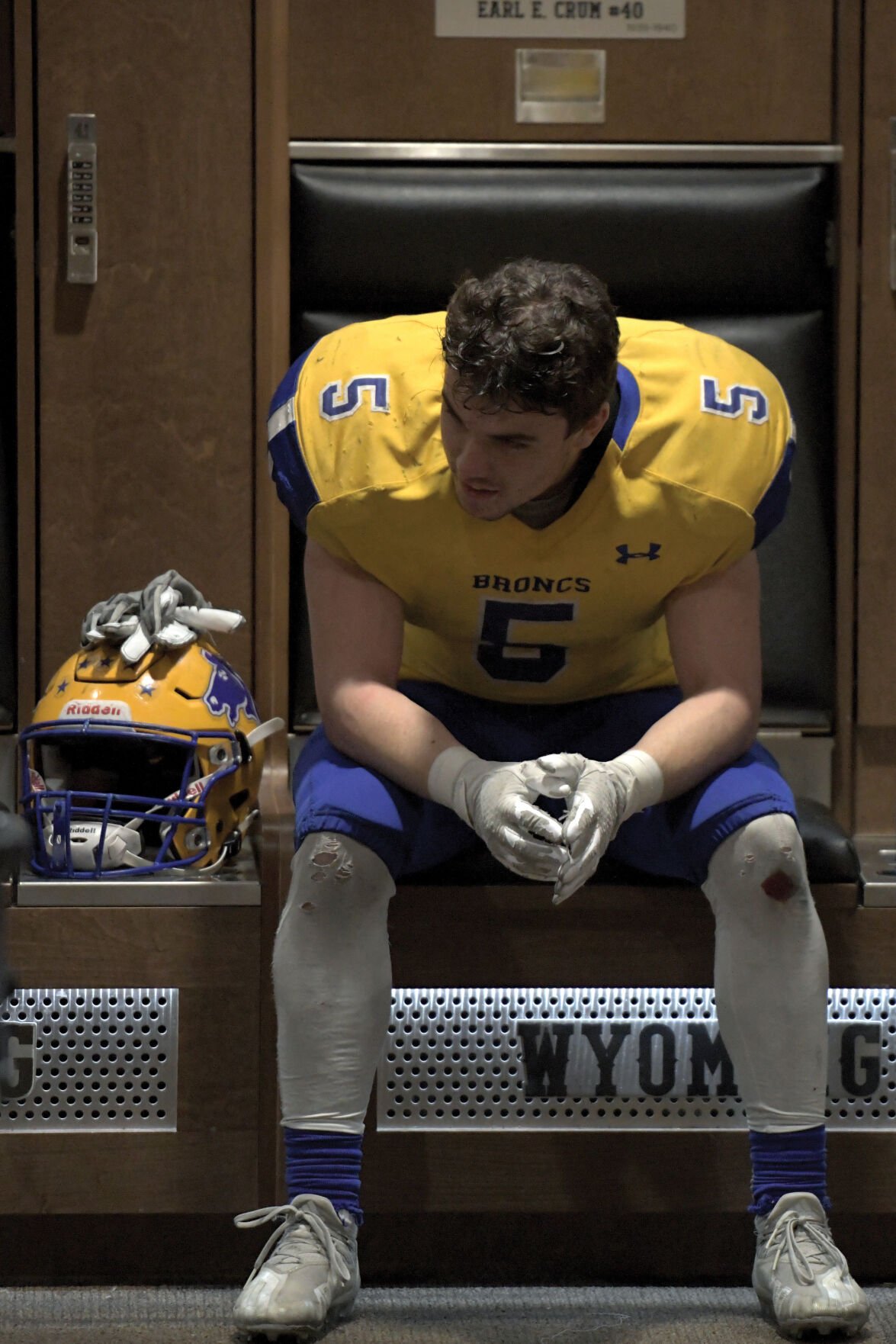 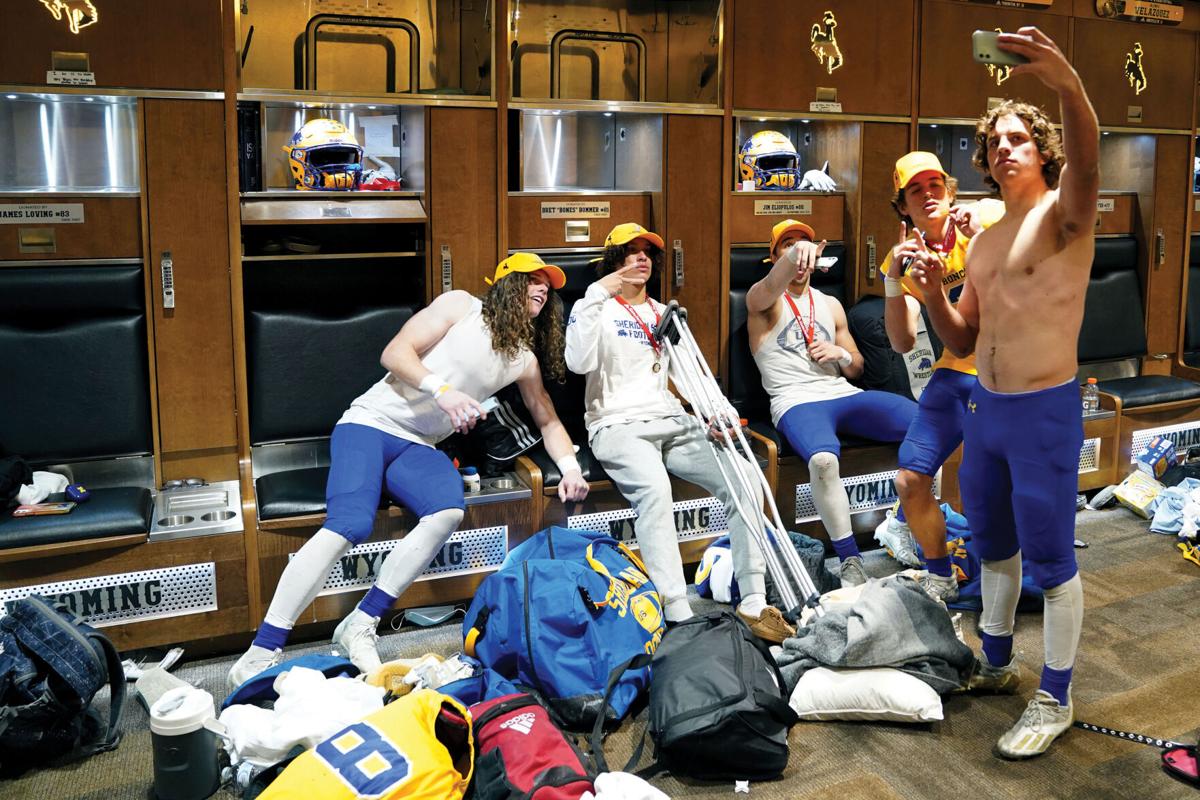 Sheridan's Carter McComb channels coach Rick Vice from "Division III: Football's Finest" with a "GET SOME" speech before the state championship game against Rock Springs Saturday, Nov. 13, 2021, at War Memorial Stadium. McComb led the Broncs in this pregame ritual all season long.

Sheridan's Carl Askins laces up his cleats in preparation for the state championship game Saturday, Nov. 13, 2021.

LARAMIE — The Sheridan Broncs beat the Rock Springs Tigers 45-27 to win the 4A State Championship last Saturday at War Memorial Stadium in Laramie. As the No. 1 seed, the Broncs inhabited the Wyoming Cowboys’ home football locker room. Here is what it looked, sounded and felt like.

Caden Steel bounces around the locker room with a smile on his face. Sure, he puts on his pads and his jersey, but it’s a process, and he keeps interrupting it by talking to teammates who look way more nervous than he does.

He thinks Jim Strobbe is queuing up the hip-hop music blaring from the speaker in the middle of the dimly lit room, but he isn’t sure. He likes it, though. If it is Strobbe, it’s good luck, Steel says. A few of his teammates mouth the words, but no one sings out loud.

A few wear their own headphones. They sit alone with their phones in their hands and a locker or two between them and their nearest teammate. They need the space. Others fist bump and murmur encouraging words to each other.

In less than 90 minutes, the Sheridan Broncs will play the Rock Springs Tigers for the 2021 4A State Championship.

The Broncs filter out to the hallway to get taped up by the team’s trainers before heading to UW’s indoor practice facility for warm-up drills. Those last a little less than an hour, and the Broncs come back in. Twenty minutes until kickoff. The group huddles in the middle of the locker room.

“What better way to start the state championship game,” someone starts with a slightly raised voice, “THAN WITH THE BALL!”

For the first time since arriving at War Memorial Stadium two hours earlier, the Broncs go berserk. They won the coin toss. Now, the coaches run through some last-minute game planning on the whiteboard before head coach Jeff Mowry calls Carter McComb up to the front.

McComb grabs the marker and writes “GET SOME” vertically on the wall, parodying a funny scene from “Division III: Football’s Finest.” They do this before every game. McComb imitates the film, faking an accent and saying “Go ... every … time … so others may … everytime,” as he scribbles on the board. Mowry chokes back a laugh. For the rest of the Broncs, it’s just the comedy they needed.

Brock Steel, an injured Bronc not playing in the game, stands in front of the team. His teammates’ giggles fade to concentrated stares. Steel heard boos from Rock Springs fans as he walked to the indoor practice facility earlier.

“Take it personal,” he says as part of a multi-minute speech. “I do.”

The coaches don’t need to speak. Mowry dismisses everyone onto the field.

“Twenty-four minutes to give it all you’ve got! This game is not over!”

Sheridan leads Rock Springs 24-7 after two quarters. It’s a comfortable margin, but not a clinching one against an explosive team like the Tigers. Baker was one of the first Broncs in the locker room, so as the back of the line catches up and enters, he repeats himself.

The Broncs catch their breath, some at lockers and others in folding metal chairs. Chris Larson sips a blue Gatorade. He watches Baker. The team mushes together in the middle of the room again and takes a knee.

Mowry draws offensive plays on the board and tells his squad, “We don’t need to change much, men.” Defensive coordinator Marshall McEwen follows Mowry with defensive adjustments, and then, they return to the field for 24 more minutes.

The Sheridan Broncs just won a state title, and now Colson Coon flags down a couple of his teammates. Michael Greer, Dane Steel. Coon wants to make a TikTok.

“And with that, the 2021 season has come to an end,” the video starts before flipping through short videos of Coon and his boys celebrating, posing and dancing.

The music blares from the same speaker as earlier but with a different vibe. “Someone get the music going in here!” a Bronc screamed as the team walked back into the locker room. The songs aren’t pump-up tunes anymore. They range across multiple genres. After each win, the team blasts the same playlist. “Party In The U.S.A.” by Miley Cyrus comes on. Half the locker room sings loudly and proudly. Dom Kaszas, who leans on crutches after an injury during the game, even gets in on the action.

Carter McComb wads up his wrist tape from the game and instructs his teammates to pay attention. He locates a garbage can, backs up a few steps and between-the-legs dunks it like a basketball.

Greer recaps the game, the last of his high school career, with some of his teammates. “I’m washed up now,” he announces.

Amid the chaos, Brock Steel perches at a locker in the middle of the room. He holds the state championship ball, rotating it around in his hands, just staring at it. No one cries, but multiple players come close. Larson’s eyes almost went blurry. Greer had to bow his head for a moment.

Askins, the starting quarterback, takes a trash bin around the edge of the room and sweeps up. Mowry notices and thanks him.

Askins remains in the locker room until there are only a few Broncs left. They talk with Mowry about the game, about the season.

“What are you going to do to top that when you wake up tomorrow? Mowry asks jokingly.

“I’ll still be a state champion in the morning,” Baker responds.

Mowry tells the last few he is proud of them and leaves. “Go get on the bus, men,” he says before reminding them of the catered postgame Qdoba. “Get a burrito!”

Baker is the last one. He walks out of the locker room and toward the team bus but stops after a few steps. He turns around and wanders back. He finds the switch and turns off the lights.