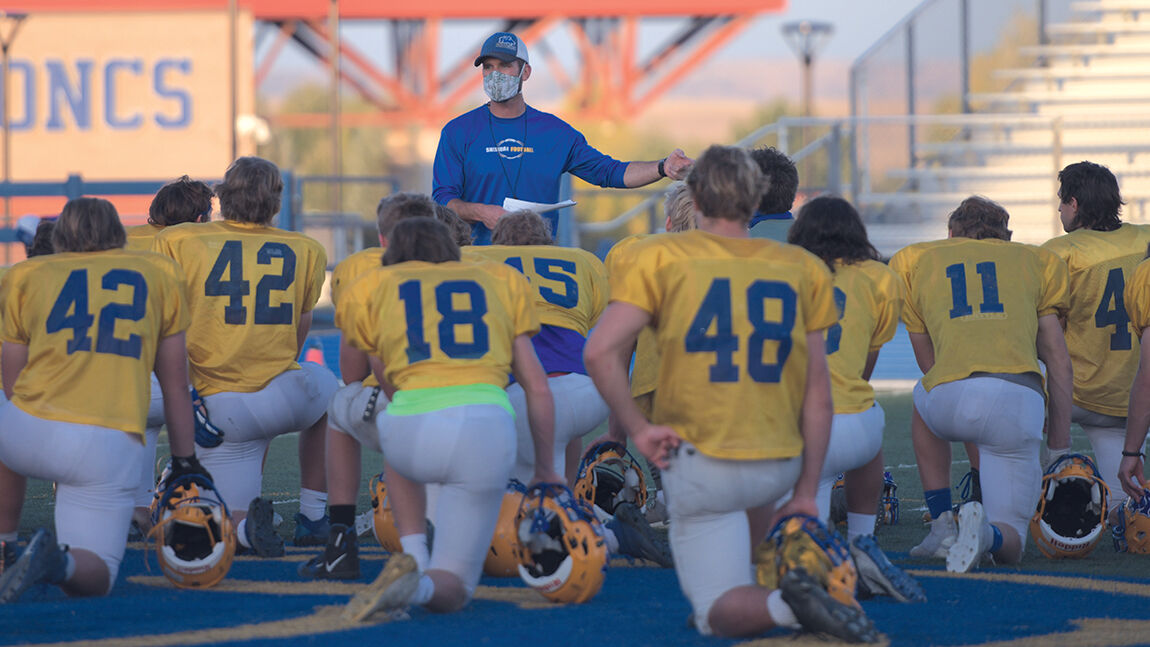 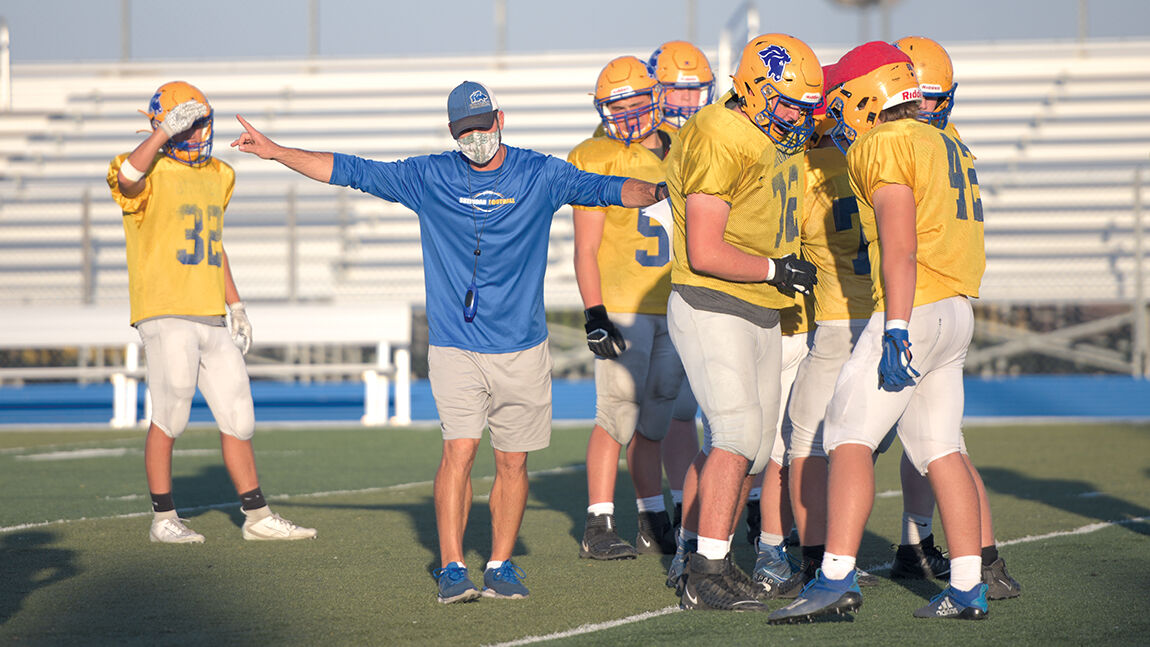 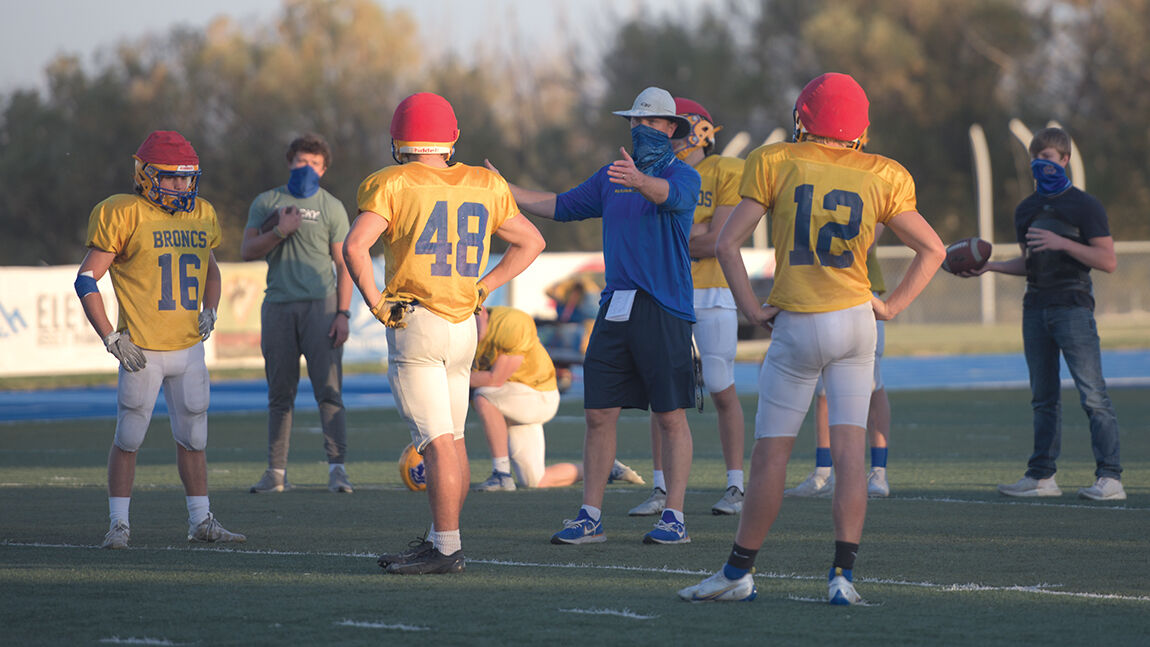 SHERIDAN — At the end of the Sheridan Broncs football practice Monday, players took aim at an empty trash can about 30 yards away from the team huddle. As player after player stood, threw a football and missed the can, his kneeling teammates groaned good-naturedly and head coach Jeff Mowry teased his gift-card prizes burned a hole in his pocket.

Mowry ended the two-hour long practice with a call for precision from the team on the field and a reminder to his players to take care of their uniforms after practice.

“Those are the little things that lead to two-point losses or two-point victories,” Mowry said. “We have to be consistent in all that we do.”

“It was good for us — it gives us motivation and shows us what we have to work on so we can move forward from that and not dwell on it,” senior wide receiver Kyle Meinecke said. “We’ll use that game as fuel to get better for the next one.”

Because Sheridan’s (3-3) third loss of the season ended with a fluky fumble in the fourth overtime after a close defensive battle during regulation and a back-and-forth offensive show during the overtime frames, Mowry and his coaching staff felt no need to schedule conditioning drills Monday.

Meinecke said the Broncs had endured worse practices following a loss and attributed the scheme-focused exercises to the perseverance the team showed in Casper.

“Through four overtimes, there was no lack of effort,” Mowry said. “I really feel like our team came together and worked hard together for four quarters.”

The Broncs and the Mustangs played to a 10-3 score before Sheridan drove down the field in the waning minutes of the fourth quarter. Senior quarterback Zach Koltiska found Meinecke in the end zone to convert on an 18-yard, fourth-down touchdown play to tie the game.

“We were all dialed in, ready to get the job done,” senior lineman Quinton Mangus said after Meinecke’s touchdown. “When we scored, we were more than ready to put it away.”

But Sheridan and Natrona went tit-for-tat during the overtime frames, trading touchdowns through three extra frames while Sheridan drank water to stay hydrated and remembered the team’s weekly focus on selflessness.

“Play to make your teammate look good,” Mangus said, explaining the Broncs’ mentality during the multiple overtimes. “You want to do your job to the best of your ability in order to make them look good.”

Though the extensive battle didn’t result in a favorable outcome for the Broncs — as Koltiska fumbled and the Mustangs fell on the ball to ice the game 38-31 — Sheridan will always remember the adrenaline that accompanied the contest.

“I thought it was a fun game,” Mangus said. “It was enjoyable, besides losing.”

“It was definitely an emotional roller coaster, but it was fun,” Meinecke said. “It was one of the most fun games I’ve ever played in high school.”

Before the “moneyball shots” at the trash can Monday, Broncs’ defensive coordinator DJ Dearcorn led the final exercise of practice, imploring his team to play physically against Kelly Walsh High School this Friday.

The head coach said the Broncs need improvement at getting open against man-pressure and zone coverage while becoming more efficient in their passing game against the Trojans. And the defense will have to adjust to Kelly Walsh’s option-attack, the likes of which Sheridan hasn’t seen before in 4A this season.

But, if last Friday’s marathon of a matchup taught Mowry anything, it’s that his team doesn’t back down from a fight and rallies around each other to overcome earlier difficulties and adversity.

“You always remember, a little bit, the win or loss,” Mowry said. “But I think I’m going to remember the drive at the end of the fourth quarter more than anything — a team that has struggled to throw the ball, then all of a sudden when we need it, we had some clutch performances by a whole offense and, really, a team of guys.”