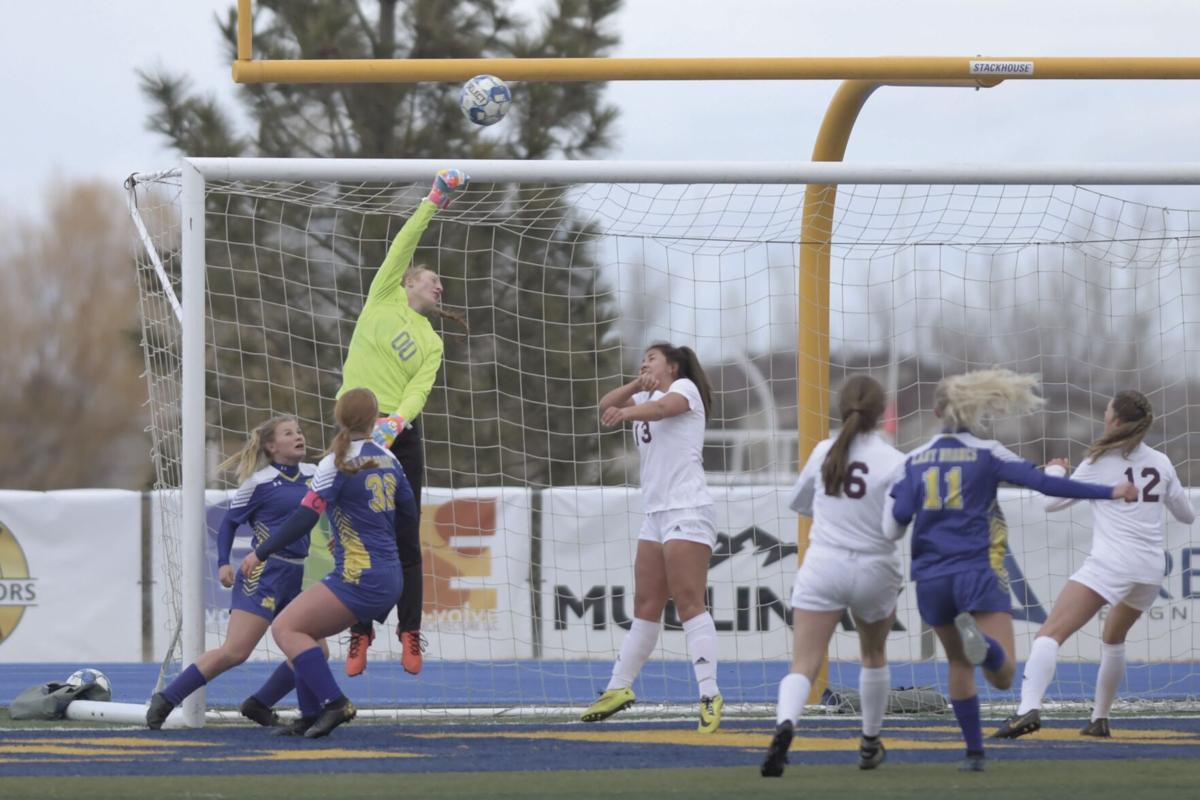 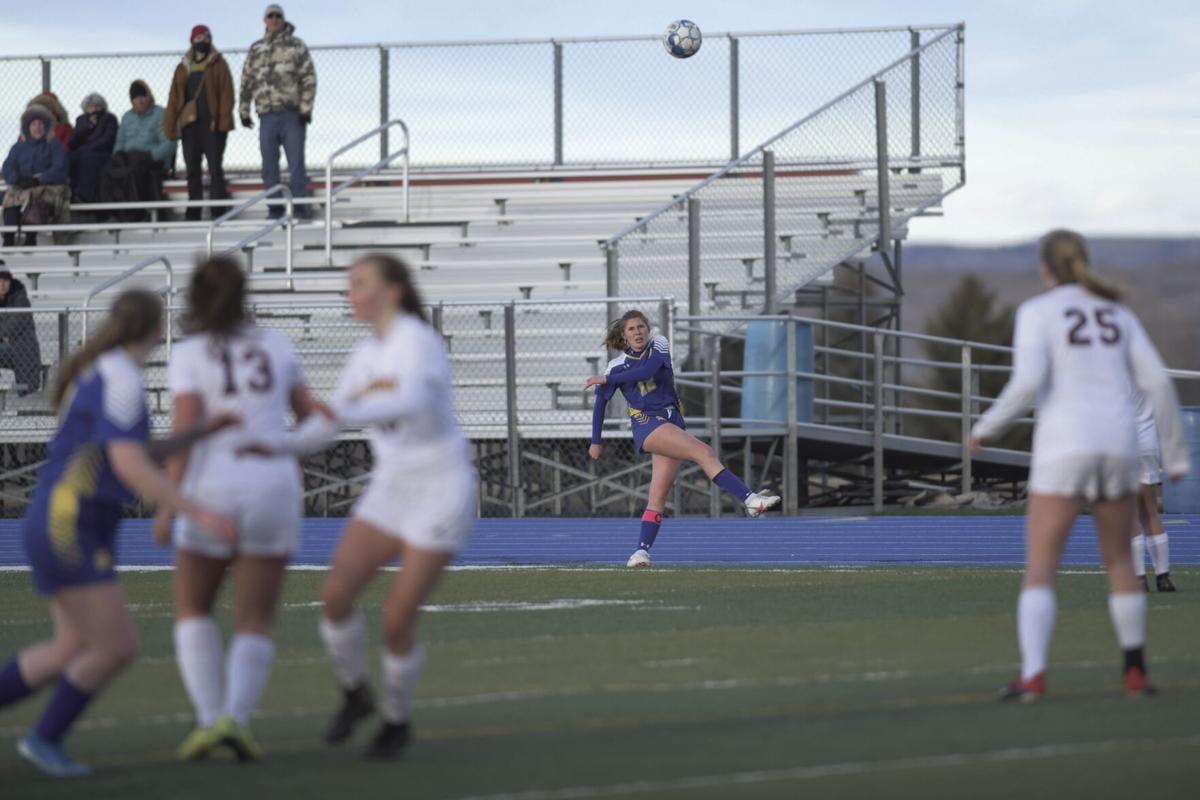 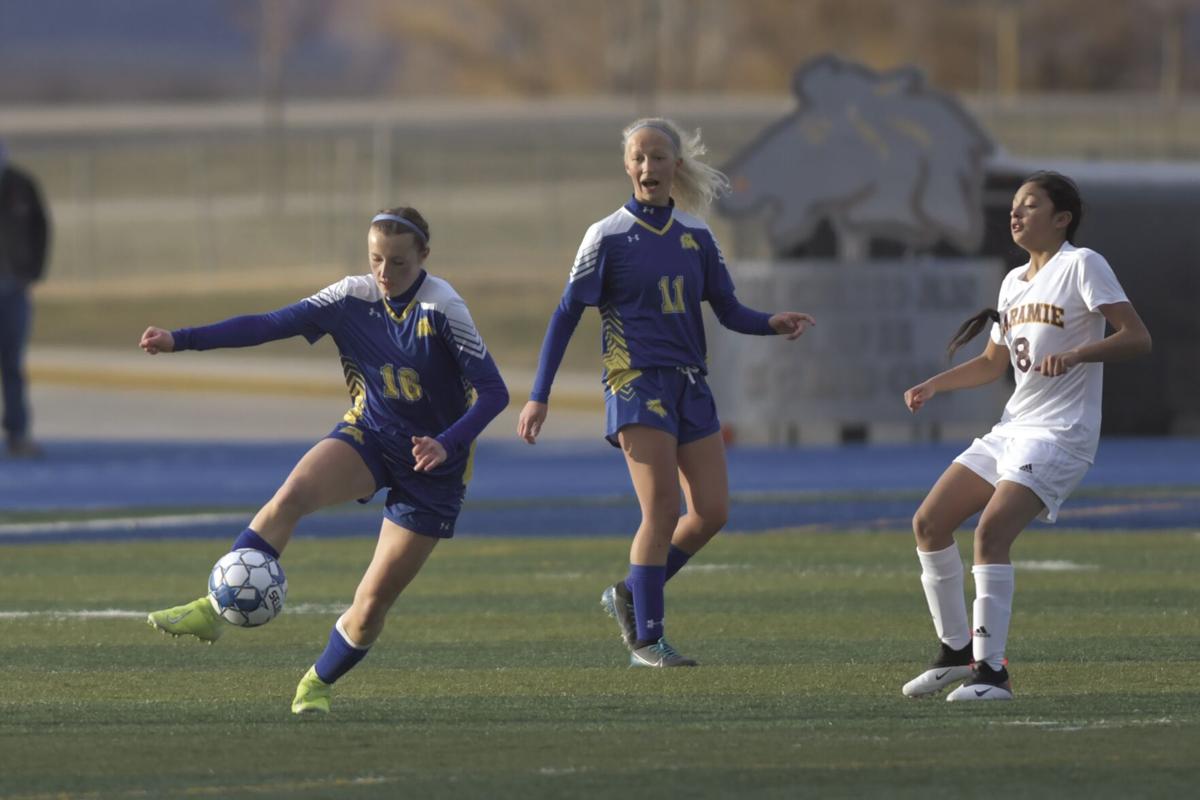 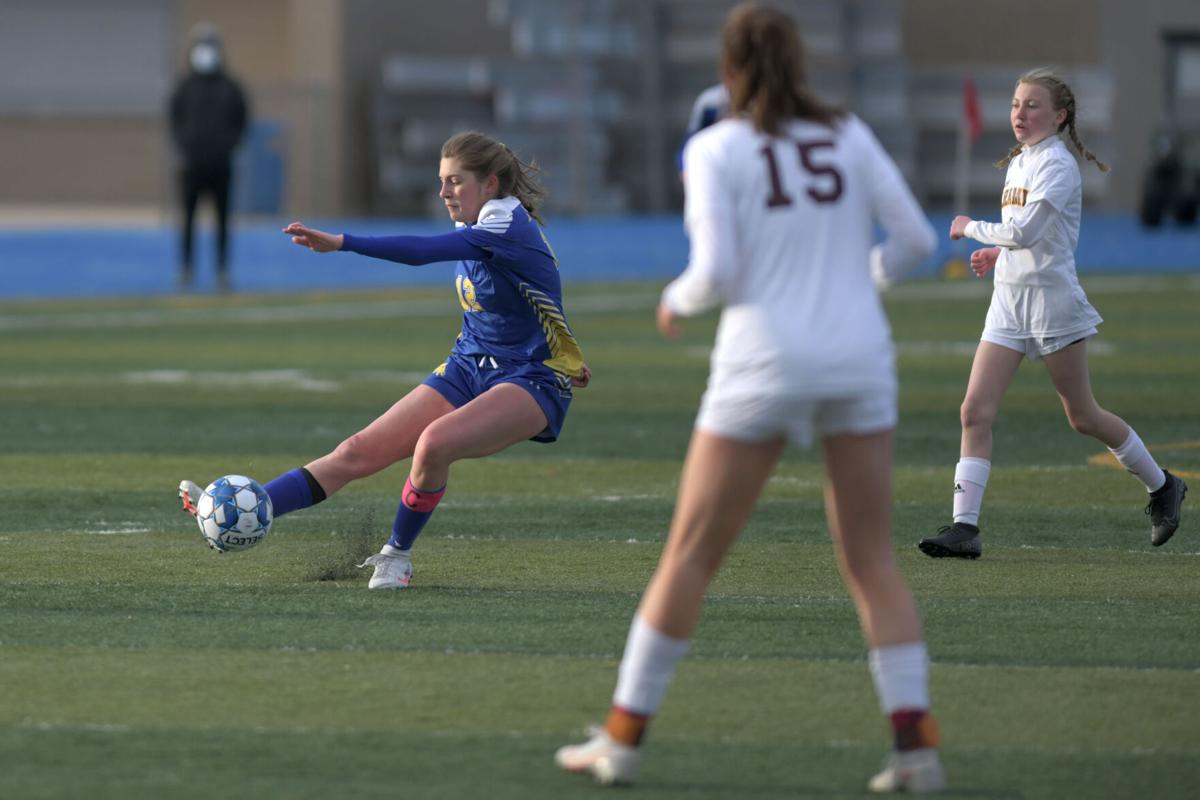 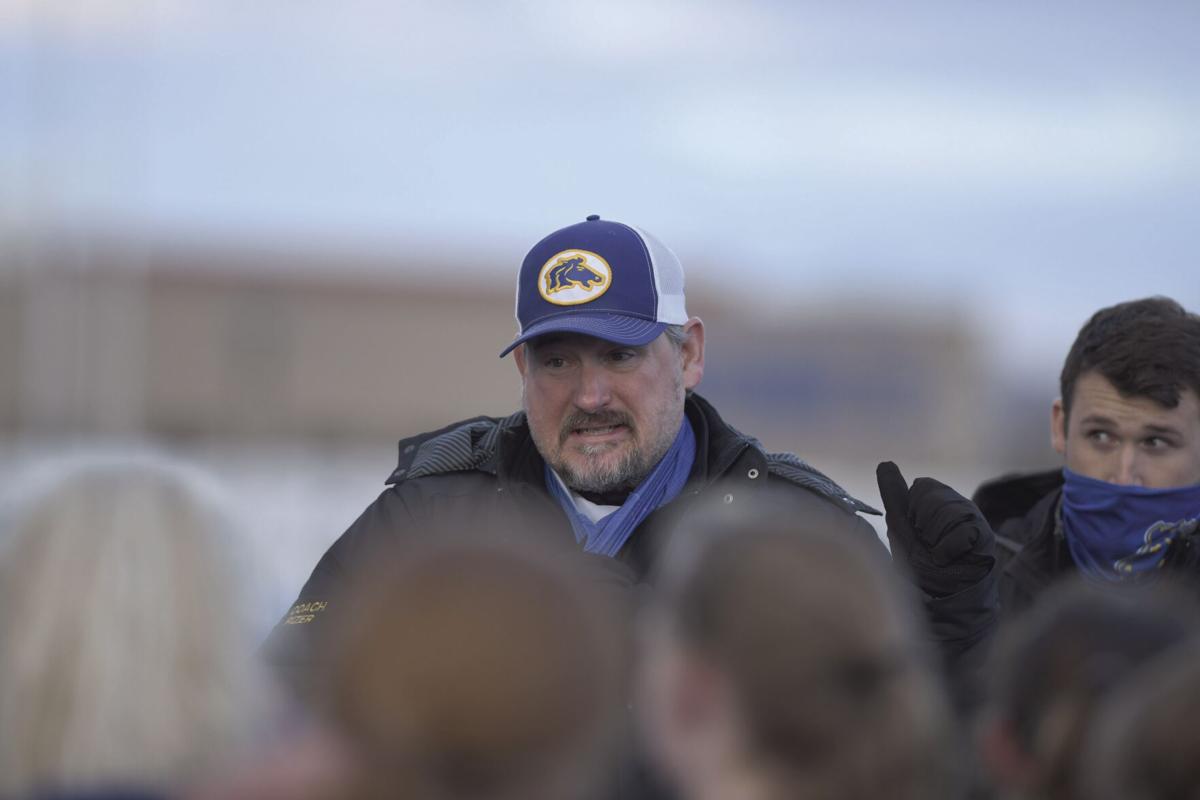 Head coach Kevin Rizer breaks down the strategy for the second half of the match during the Lady Broncs soccer game against Laramie Friday, March 26, 2021. 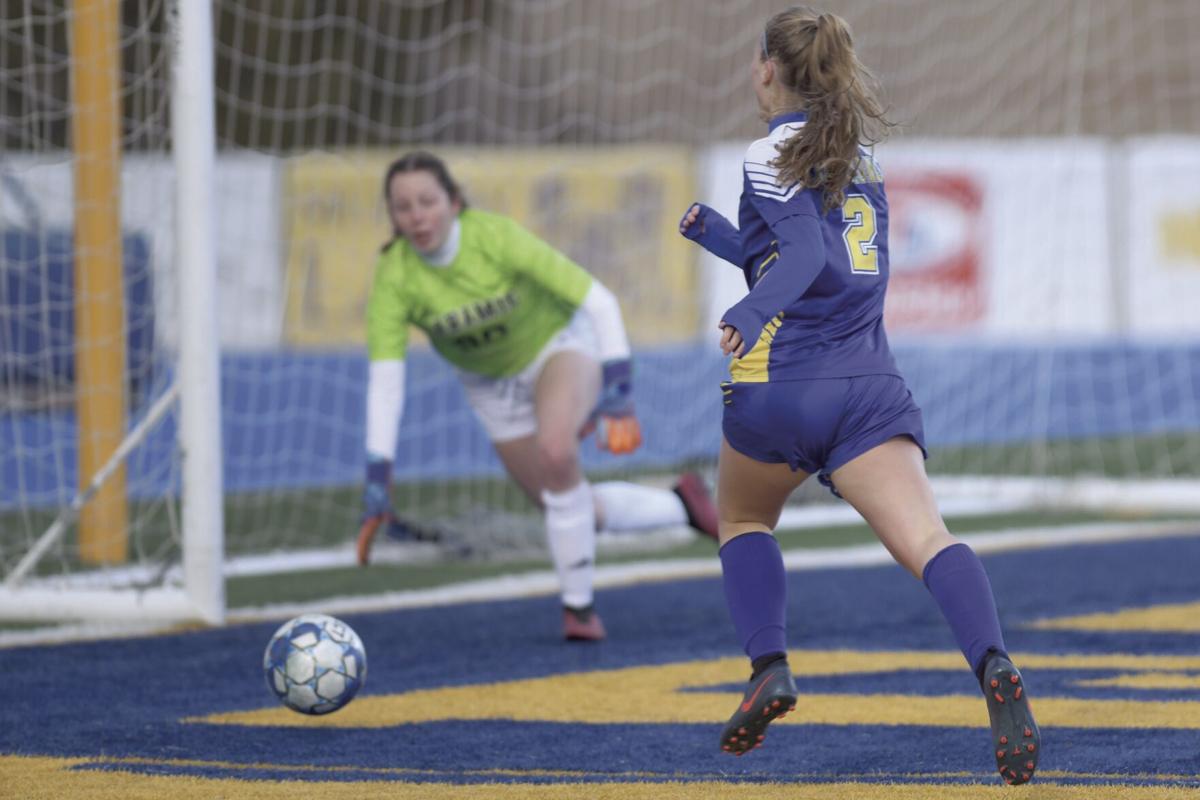 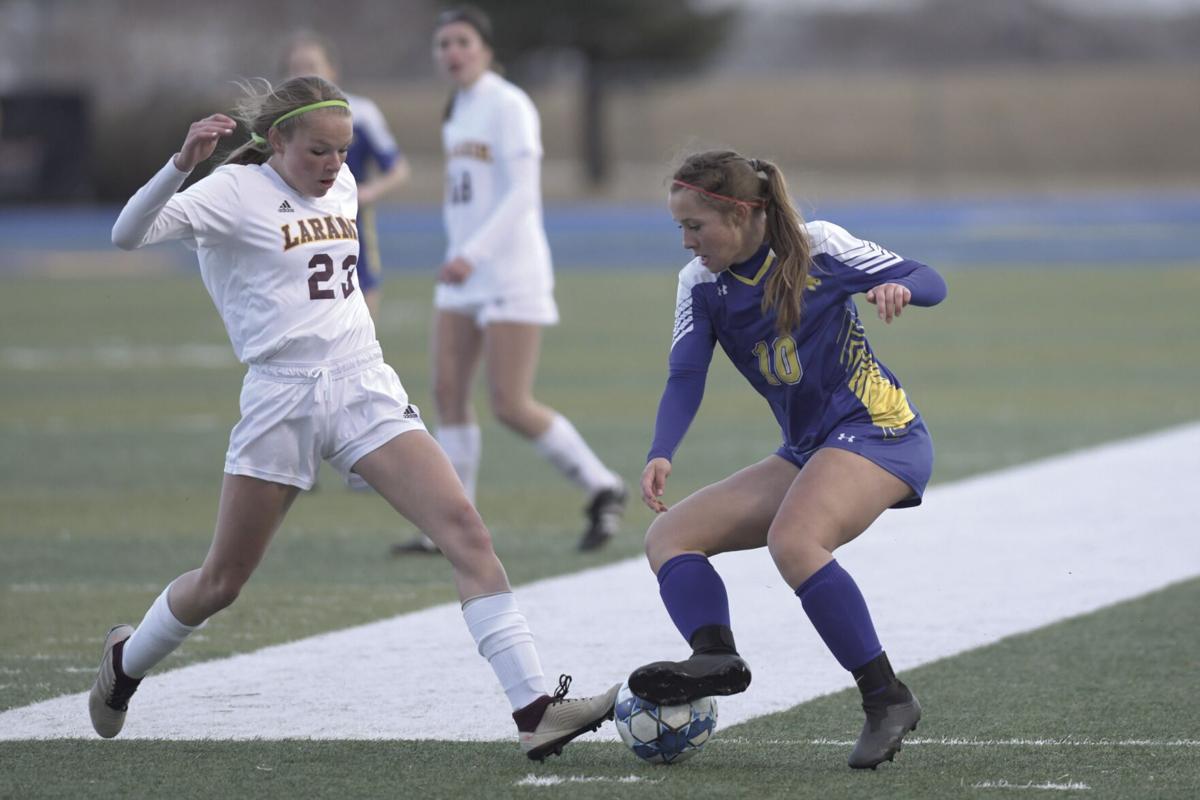 Sheridan's Kayleigh Thomas (10) makes a quick change in direction to make the pass to the far side of the pitch during play against Laramie Friday, March 26, 2021. Sheridan tied Laramie 0-0.

Head coach Kevin Rizer breaks down the strategy for the second half of the match during the Lady Broncs soccer game against Laramie Friday, March 26, 2021.

Sheridan's Kayleigh Thomas (10) makes a quick change in direction to make the pass to the far side of the pitch during play against Laramie Friday, March 26, 2021. Sheridan tied Laramie 0-0.

Junior goalie Libby Gardner and a young defensive corps helped keep Cheyenne South scoreless Saturday, while the Lady Broncs earned goals from Emma Larson and Catie Kuehl to improve to 3-0-1 on the season.

While happy with the win in front of the home fans, Sheridan head coach Kevin Rizer said he thinks his team missed out on posting an even bigger margin of victory Saturday.

“We had scoring opportunities,” he said.

Rizer said he and the coaching staff challenged the Lady Broncs after heading into halftime with a 1-0 advantage on the goal by Larson.

Besides Gardner in net, Rizer praised the effort by his young defensive group of juniors Stevie Will and Ellie Williams, and sophomores Ella Kessner and Sydni Bilyeu.

“They’ve done a nice job for us,” Rizer said.

He also credited the win to solid leadership by Aria Heyneman and Libby Green, the team’s only two senior starters at the moment.

“That’s what you need,” Rizer added. “As your seniors go, your season goes.”

According to their coach, the group will need to continue its strong play, as the Lady Broncs face an even stiffer test Tuesday when they travel to Gillette to face powerhouse Thunder Basin.

“We’re really going to get tested on Tuesday,” Rizer said. “We’re playing one of the best teams in the state.”

Rizer added he’s excited to see how his team measures up so early in the season.

“I think it’s good. I prefer tough teams like this,” he said. “If you want to be the best — and we’re not there yet— you have to play the best.”

“I’m looking for a big week from (our players), to be honest,” Rizer said. ”Tuesday and Thursday are going to be really big for us.”

The weekend started much like it ended for the Lady Broncs, with a shutout. On Friday, that wasn’t enough for a win, as Sheridan battled to a 0-0 tie against a tough Laramie squad.

After allowing one goal in each of the team’s first two games, Gardner posted her first shutout of the season while in goal.

“She’ll probably be our goalkeeper for this year,” Rizer said.

Like against Cheyenne South, he added the Lady Broncs had a chance to put the game in the win column.

“I don’t think we’ve hit our stride yet,” he added. “I’d like to see us possess the ball more. We gave up too many possessions.”