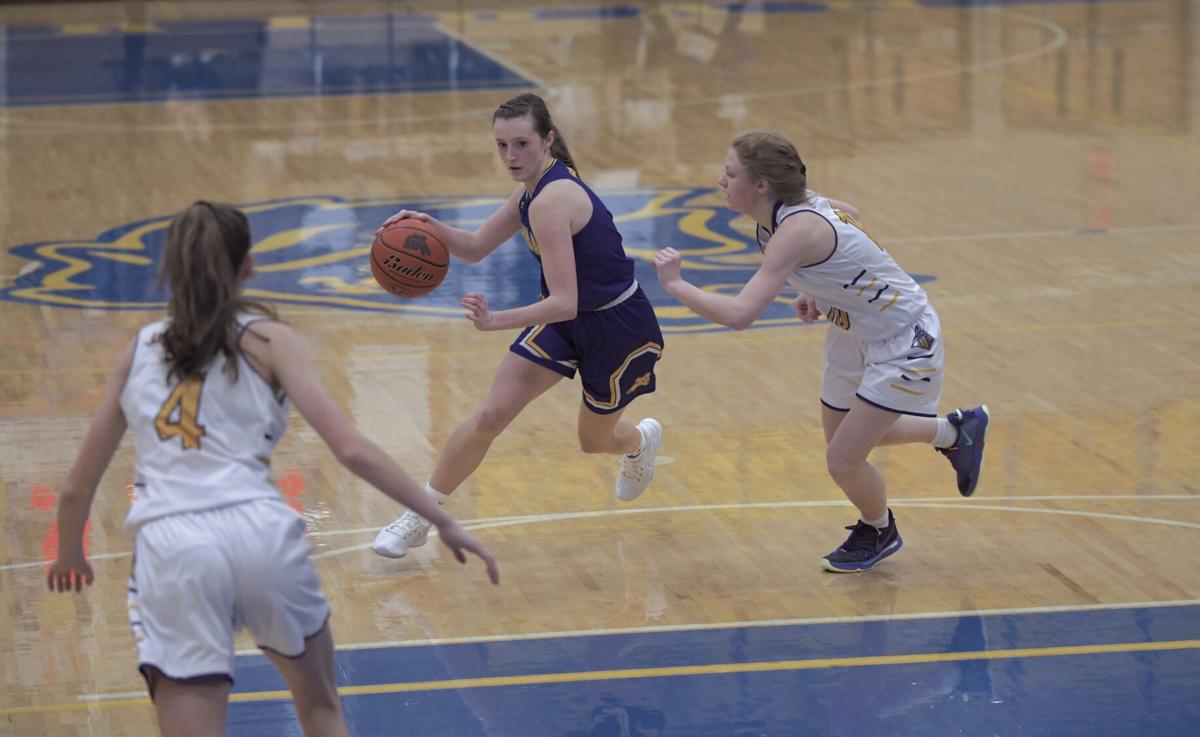 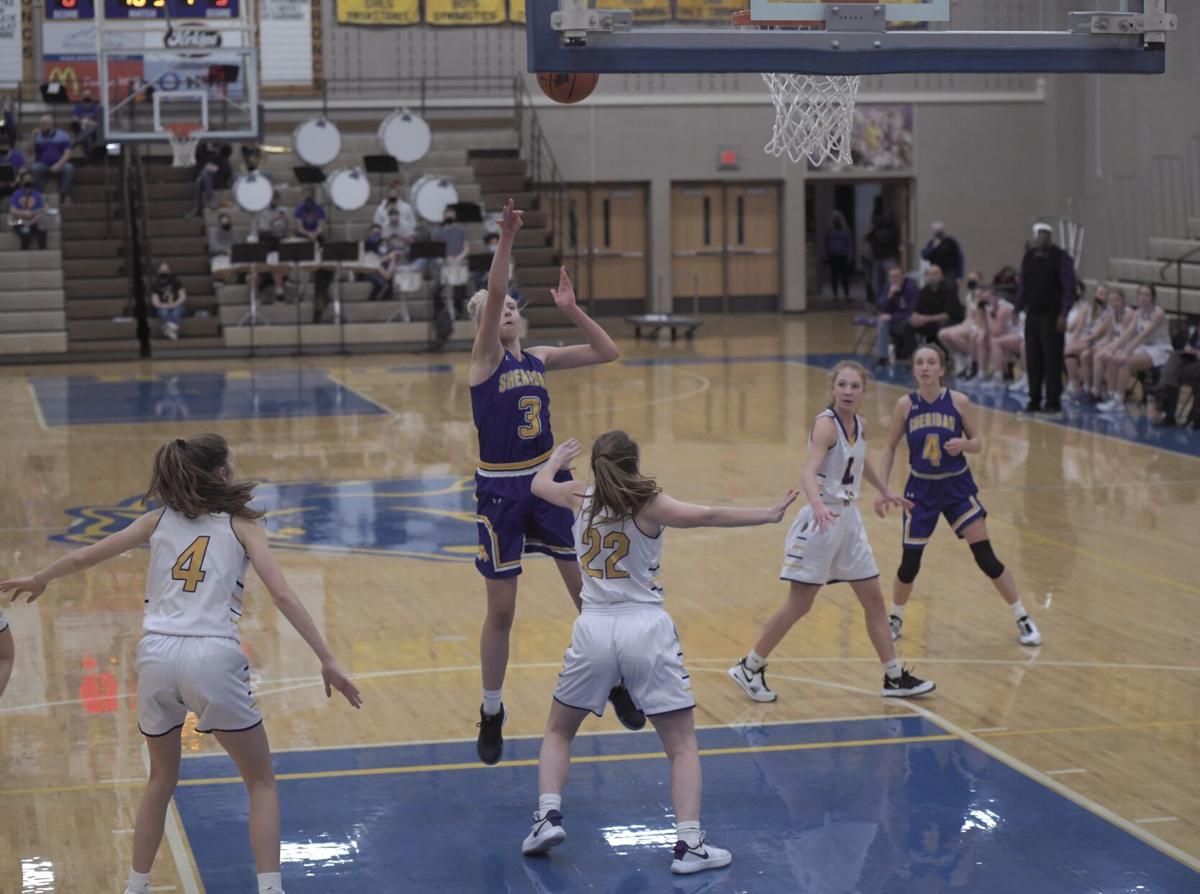 Sheridan sophomore Samantha Spielman rises up for a short jumper during the Lady Broncs game vs. Laurel Saturday, Jan. 9, 2021. Spielman finished with 16 points, though Sheridan couldn’t find their rhythm and lost 54-45. 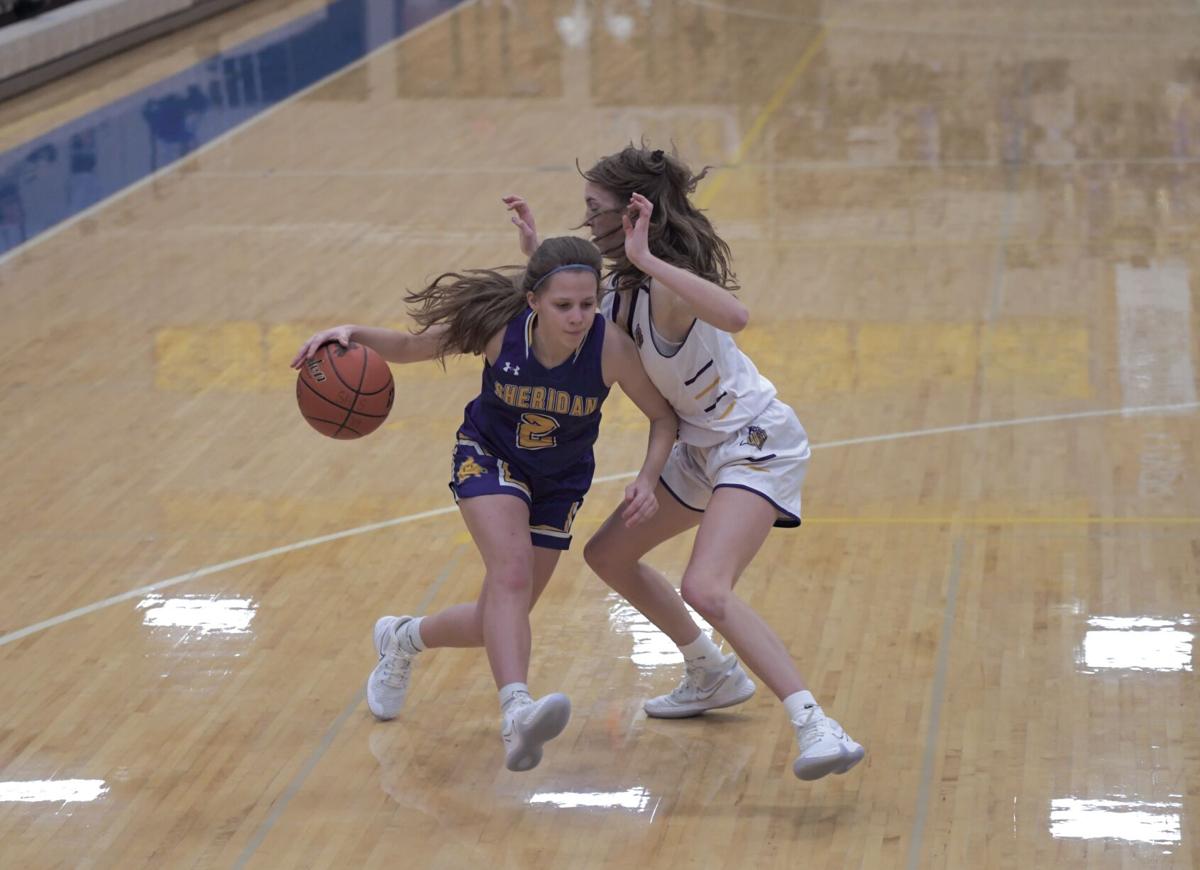 Sheridan freshman Adeline Burgess pushes through Laurel sophomore Alyse Aby during the Lady Broncs game vs. the Lady Locomotives Saturday, Jan. 9, 2021. Burgess finished with two points but drew an offensive foul during a critical moment in the fourth quarter.

Sheridan sophomore Samantha Spielman rises up for a short jumper during the Lady Broncs game vs. Laurel Saturday, Jan. 9, 2021. Spielman finished with 16 points, though Sheridan couldn’t find their rhythm and lost 54-45.

Sheridan freshman Adeline Burgess pushes through Laurel sophomore Alyse Aby during the Lady Broncs game vs. the Lady Locomotives Saturday, Jan. 9, 2021. Burgess finished with two points but drew an offensive foul during a critical moment in the fourth quarter.

SHERIDAN — The limited-capacity crowd in Sheridan High School’s gym chanted “defense” with just more than six minutes left to play in the fourth quarter of the Lady Broncs game against the Laurel Lady Locomotives. The scoreboard showed the smallest deficit Sheridan faced Saturday afternoon, and Laurel’s head coach called a timeout with a narrow 36-33 lead 6:03 left in the fourth quarter.

Sheridan sent the Lady Locomotives to the line during the ensuing possession, and the following two minutes saw Laurel make one field goal while earning seven points via free throws to build an insurmountable 45-34 lead. Trips to the free-throw line by both teams defined the remainder of the fourth quarter, and Sheridan showed glimpses of effective offense and a healthy dose of competitiveness but couldn’t complete the comeback — losing 54-45.

“I think we competed until the last minute,” head coach Ryan Sullivan said.

The loss comes after a 50-27 defeat to Billings Central Friday evening, and gives the Lady Broncs a 3-3 record prior to starting conference play against Natrona this Friday.

“We’ve just been digging ourselves a hole these last few games,” Sullivan said. “Part of that is we get a little timid in the first half, and we don’t do the things on the back side of our offense that we’re supposed to be doing.”

Sullivan remains confident in Sheridan’s ability to recover from its second-straight loss, and much of the third quarter gives the first-year head coach reason for optimism. The Lady Broncs outscored the Lady Locomotives 14-10 in the third frame and Sullivan regularly applauded Sheridan’s defensive efforts from the sideline.

When Sheridan answered its own score with a run-and-jump press, the Lady Broncs found success cyclically from offense to defense.

“But it’s tougher to get into that if we don’t score,” Sullivan said.

So the Lady Broncs will look to start on time during their looming conference schedule, as Sheridan has faced deficits at halftime in each of its last three games. The Lady Broncs managed to mount a 10-point comeback against Buffalo Thursday but dropped their games to Billings Central and Laurel.

The Lady Locomotives jumped to an early 13-4 lead in the first quarter, prompting Sullivan to burn a timeout. Freshman Adeline Burgess answered the call with a steal during the possession following the timeout, and sophomore Sydni Bilyeu made a field goal and drew a foul for a three-point play. The defense showed renewed vigor as it forced a miscue, and Laurel turned the ball over by throwing out-of-bounds.

Starting the third quarter facing the 24-15 deficit, the Lady Broncs found their rhythm, though the Lady Locomotives did, as well. Bilyeu scored six of Sheridan’s 14 points from the field and the free-throw line to bring her team’s deficit down to 34-29 through 24 minutes of play.

Marked by a reinvigorated offense but marred by trips to the free-throw line and intentional fouling in the waning minutes of the game, Sheridan cut the lead to the aforementioned three points but the final buzzer sounded the 54-45 defeat.

“I believe that we have a bunch of girls who want to compete,” Sullivan said. “... I think they’re going to show up Monday and be ready to practice.”

Bilyeu and sophomore Samantha Spielman finished with 16 points each.