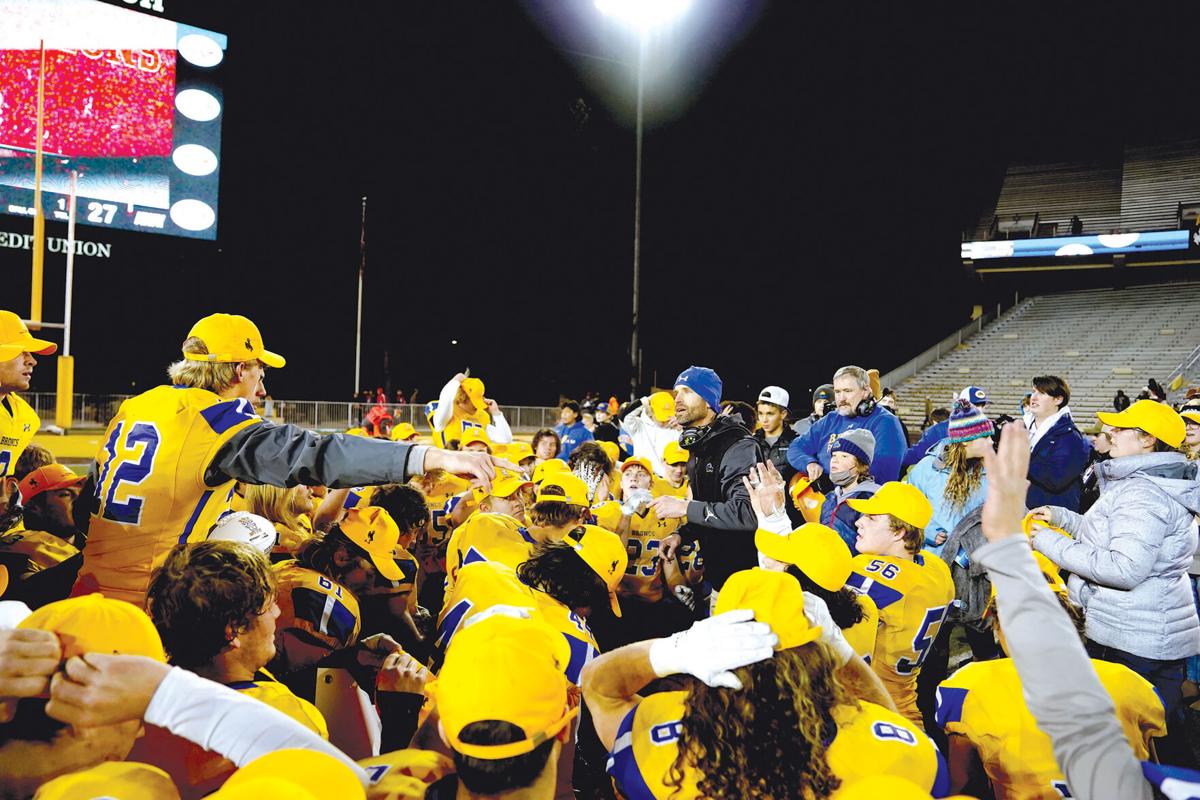 The Sheridan Broncs take a few minutes after winning the state championship to recognize individual contributions to their 45-27 victory over Rock Springs Saturday, Nov. 13, 2021. 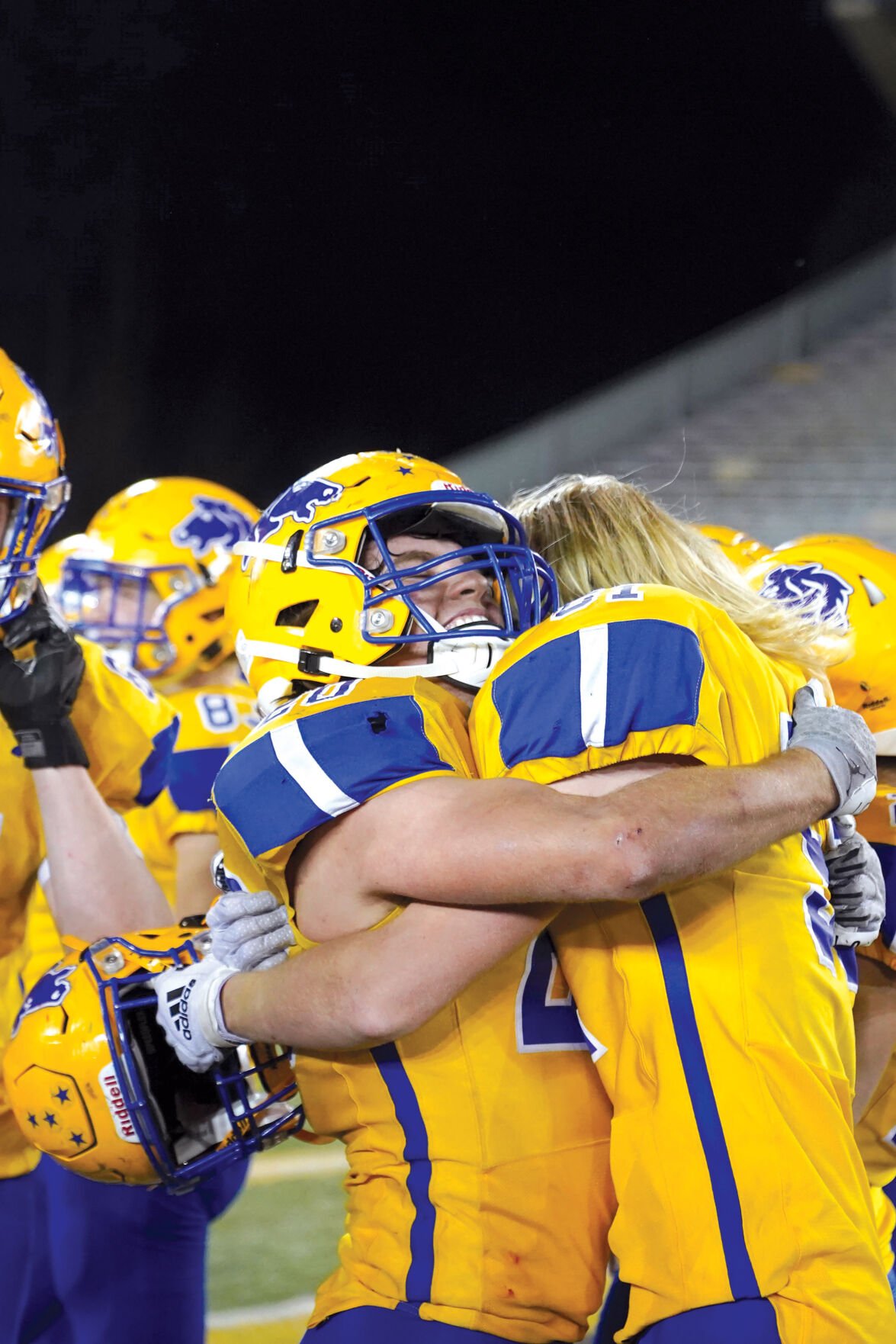 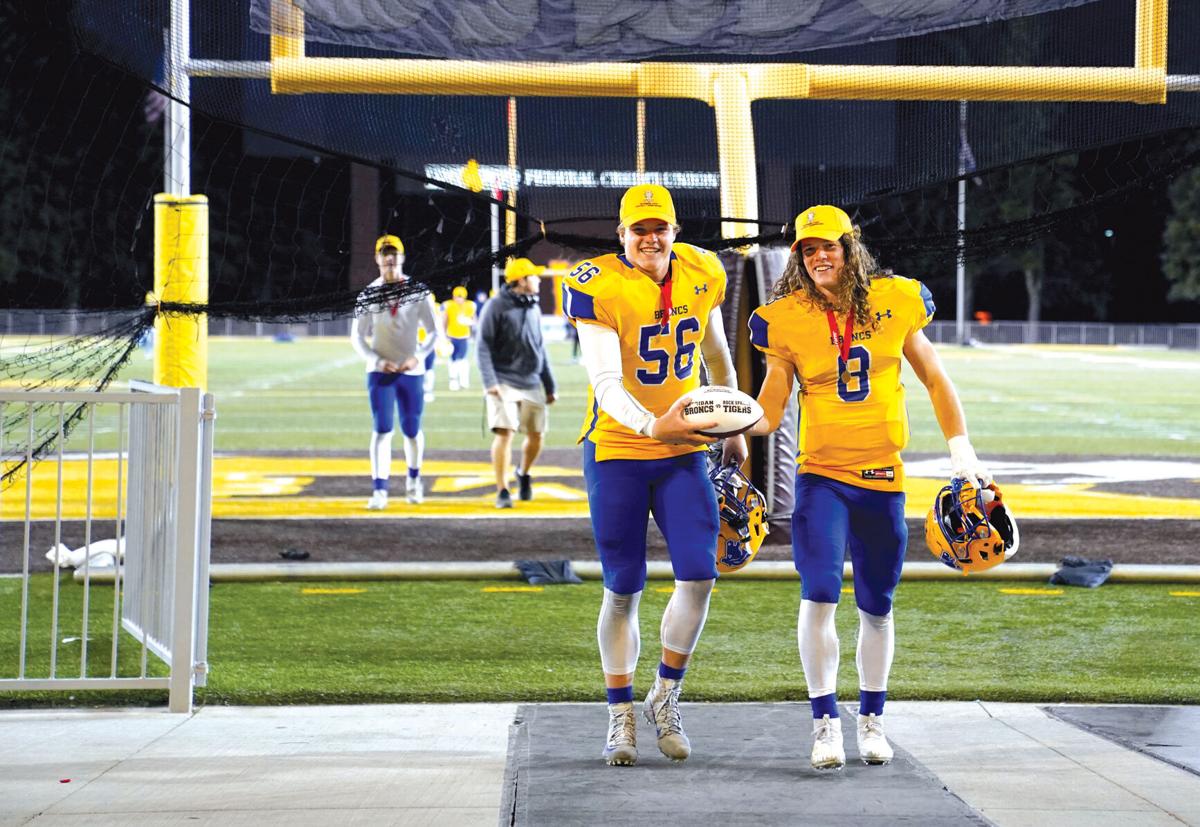 Sheridan's Caden Steel (56) and Carter McComb (8) carry the state championship ball back to the locker room after the game Saturday, Nov. 13, 2021.

The Sheridan Broncs take a few minutes after winning the state championship to recognize individual contributions to their 45-27 victory over Rock Springs Saturday, Nov. 13, 2021.

Sheridan's Caden Steel (56) and Carter McComb (8) carry the state championship ball back to the locker room after the game Saturday, Nov. 13, 2021.

In fact, he mentioned it four times in a four-minute span after winning the Wyoming 4A State Championship title last Saturday in Laramie. That’s how he described the 2021 Sheridan Broncs.

“Being here and playing in the state championship with my whole family, it was just an amazing experience I will never forget,” the senior said.

The Broncs beat Rock Springs 45-27 at the University of Wyoming’s War Memorial Stadium in Laramie to complete an 11-1 championship season, their fifth in the last seven years.

But Sheridan didn’t ride a straight and well-paved path to the state championship. Its bumps began before the season even started.

It was tasked with replacing its 2020 quarterback, most of its offensive linemen and its top four tacklers, all of whom graduated last spring.

Then, it lost three players expected to be key contributors. During the team’s annual summer camp trek to Chadron State University, Cael Gilbertson tore up his knee and was ruled out for the season. Brock Steel faced the same situation a month later at a recruiting camp. Brock Mann’s injury made it a triumvirate. Steel and Mann were lined up to be senior leaders. Gilbertson was a prized junior quarterback vying to earn the starting gig.

Seniors Carl Askins and Rich Hall battled for the open quarterback position, but the two played evenly throughout training camp. They entered the season in a rotation, though neither had varsity starting quarterback experience.

Head coach Jeff Mowry said the goal all summer was to “grow leaders,” and Askins and Hall were a part of that.

“There was just so much doubt at the beginning of the season with all the injuries and the inexperience,” senior Chris Larson said after the championship game. “To come to this moment and play like we did, like we’ve done all year, is just amazing.”

After two blowout victories to begin their schedule, the Broncs won two tight games against Cheyenne Central and Rock Springs. They lost their first game to Cheyenne East, the team that booted them from last year’s playoffs, the last week of September.

“It was a check back to reality,” senior Michael Greer said last Saturday. “They punched us in the face, and then, from there on out, we took no practices lightly. We battled each and every week for this night.”

The Broncs didn’t lose again. They cruised through the regular season, winning three of their final four games by at least four touchdowns.

During that stretch, they continued to deal with injuries. Senior Cody Kilpatrick missed time. Tanner sat out for a month. Hall was bruised up, so Askins grabbed sole possession of the quarterback job.

But Sheridan continued to dominate in the playoffs. It advanced to the state semifinals for the 14th consecutive year and beat Natrona County to head to Laramie.

“I think just the bonds we have and the leadership we have from our seniors,” junior Colson Coon said about what made his team special. “They’re always making sure we’re going the right thing and doing the little things right. We take care of each other and love each other.”

The season ended with an on-field party and a locker room celebration.

Just before that, as a few final seconds remained in the state championship game, the Sheridan Broncs positioned themselves in victory formation. The offense packed in tightly to protect Askins as he dropped to a knee and drained the clock. They hugged.