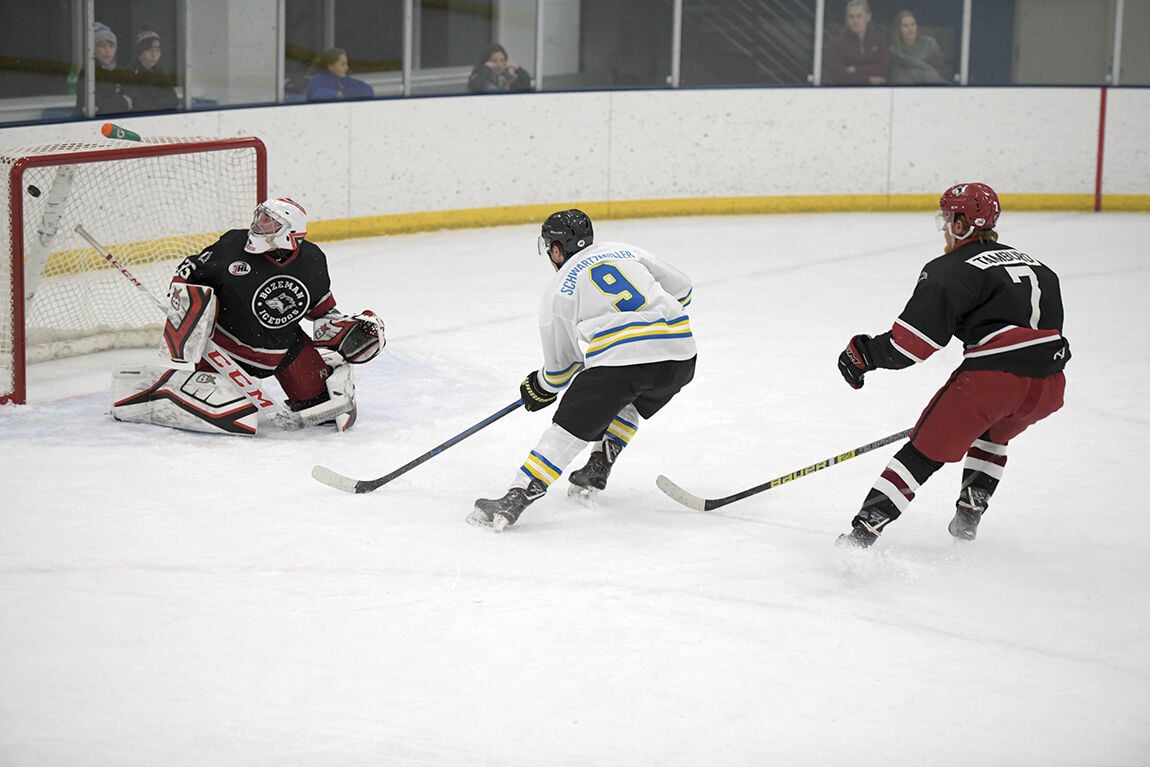 The Icedogs’ goalie AJ Cohen (35) watchs as the Hawks’ Justin Schwartzmiller’s (9) shot flies over his right shoulder and into the net Saturday, Nov. 14, 2020. The Hawks defeated Bozeman 8-1 Saturday and 5-0 Sunday, while Schwartzmiller had six goals and seven points during the series. 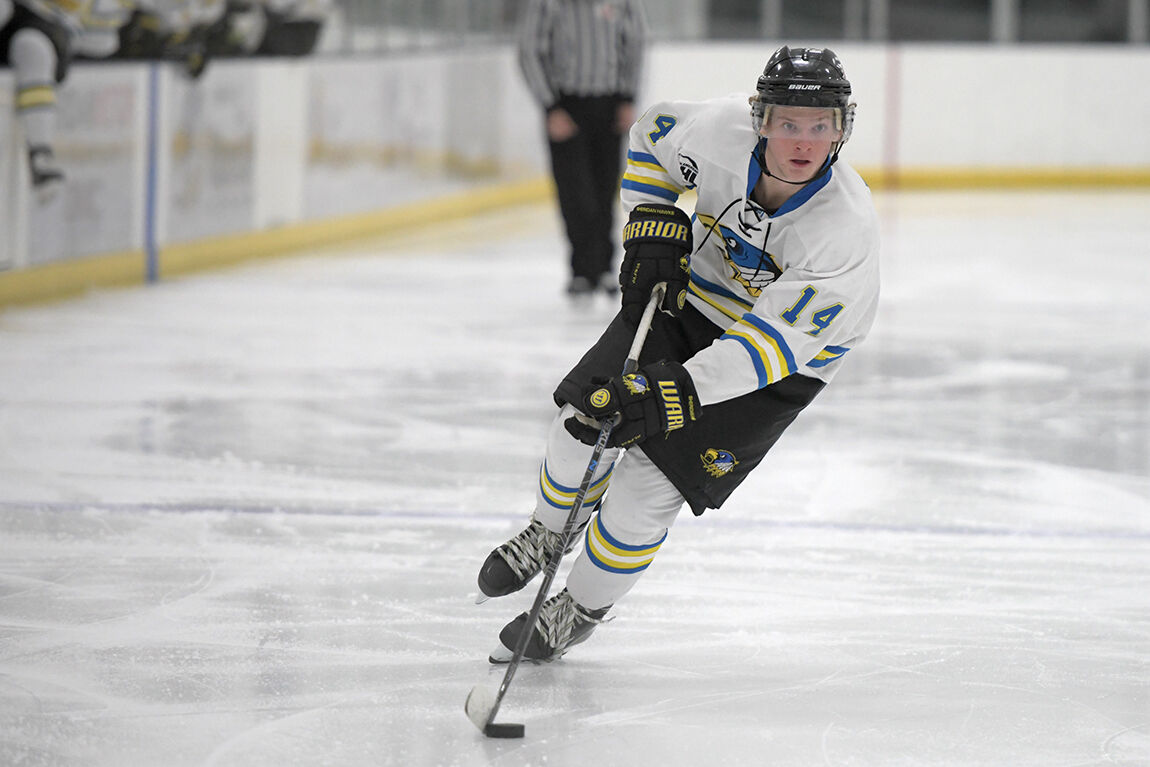 The NA3HL Hawks’ Blake Billings (14) speeds down the ice on a breakaway to score against the Bozeman Icedogs Saturday, Nov. 14, 2020. Billings has a point in all nine of the Hawks games this season — the longest streak in the NA3HL. 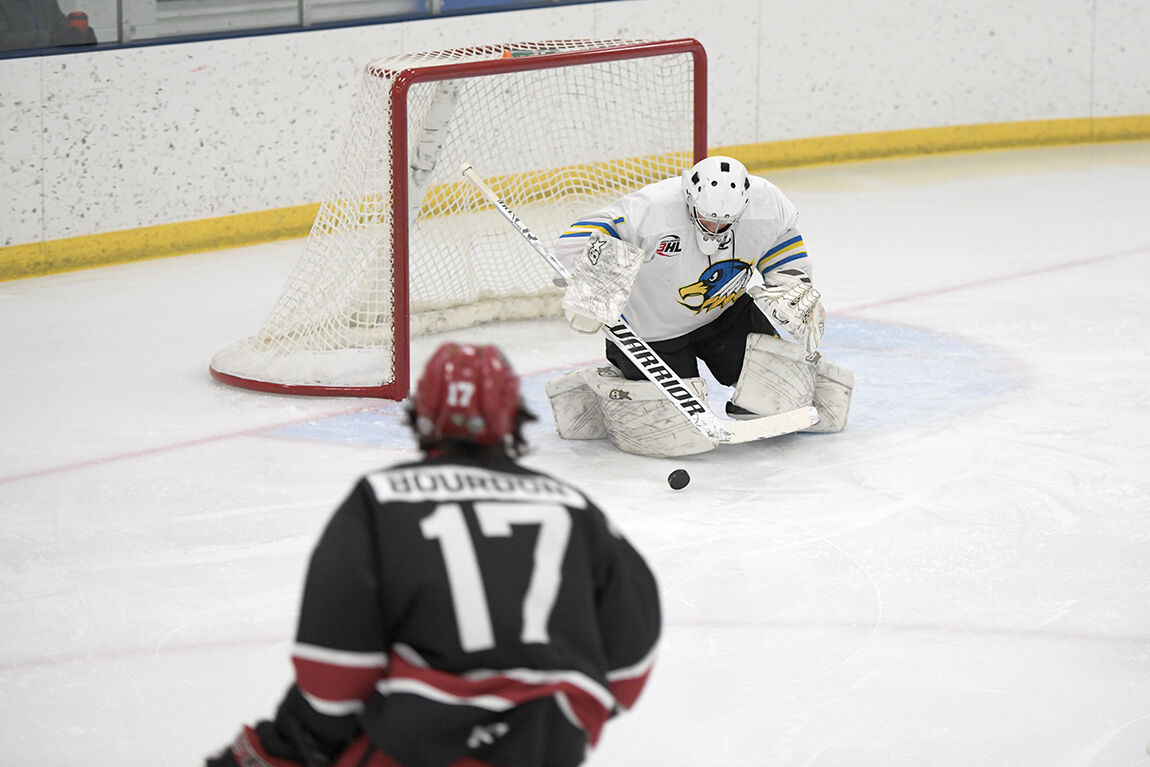 The Icedogs’ goalie AJ Cohen (35) watchs as the Hawks’ Justin Schwartzmiller’s (9) shot flies over his right shoulder and into the net Saturday, Nov. 14, 2020. The Hawks defeated Bozeman 8-1 Saturday and 5-0 Sunday, while Schwartzmiller had six goals and seven points during the series.

The NA3HL Hawks’ Blake Billings (14) speeds down the ice on a breakaway to score against the Bozeman Icedogs Saturday, Nov. 14, 2020. Billings has a point in all nine of the Hawks games this season — the longest streak in the NA3HL.

SHERIDAN — With just less than 10 minutes played in the first period of the NA3HL Sheridan Hawks’ game vs. the Bozeman Icedogs Sunday afternoon, head coach Andy Scheib called a timeout. The scoreboard showed a scoreless tie, but Scheib didn’t like what he saw.

“We came out flat,” Scheib said. “We were battling some adversity right away. So we took a timeout to recollect our thoughts and get back to what we do, which is working hard and out-working the other team.”

The Hawks took the ice Sunday because the Icedogs experienced transportation difficulties Friday. The teams played the Saturday game on time at 7:30 p.m. but moved Game Two of the series to Sunday.

Sheridan’s under-19 girls team played prior to the scheduled noon puck drop for the North American 3 Hockey League Hawks, and the game ran 20 minutes over its allowed time. The rescheduled game, which took place a mere 14 hours after Friday’s contest, and the delayed start prompted Scheib to call the timeout when he saw how his team started Sunday.

Scheib gestured wildly and delivered a clear message to the Hawks.

“He told us, ‘You’re not where you should be right now, and you need to step it up,’” defenseman Dakota Kott said. “Just pretty much, ‘Figure it out’ because we were not going to win that hockey game that way. We took it to heart, went out and got better every shift.”

The stoppage proved beneficial, as five minutes later, forward Justin Schwartzmiller scored on the power play and not a minute later, forward Lucas Gudz netted another goal on the man-advantage. The Hawks took their 2-0 lead to the locker room to end the first period.

Schwartzmiller added a goal 1:04 into the third period to push the score to 5-0. Goaltender James Downie stopped Bozeman’s nine third-period shots to earn his fourth shutout of the season and help the Hawks to their eighth win.

“The scores didn’t really show how the games went,” Kott said. “I thought it was a really good game both ways [Sunday]. I thought both teams were competing really hard.”

The 5-0 victory transpired similarly to Sheridan’s 8-1 Saturday night win, as the Hawks led 2-0 after the first period and 4-1 through 40 minutes of play, though they added four goals in the third period during Game One.

Prior to Saturday’s contest, both teams had 12 points in the NA3HL’s Frontier Division. The series sweep pushes Sheridan’s record to 8-1 and past the Icedogs in the standings. The Hawks now boast 16 points and hold the second-best record in the division and sixth-best record in the league.

The matchup served as a measuring stick for Sheridan, as its only loss of the season came to Bozeman Oct. 3, and the Hawks hadn’t played an over .500 team since that early season meeting. The five- and seven-goal margins of victory this weekend fell under Sheridan’s 11.8 goal average as a testament to the more competitive contests.

“Bozeman had our number there that first weekend with a split,” Scheib said. “To come out here and sweep them and give up one goal in two games, it’s huge.”

Kott finished the weekend with three assists, Gudz had his power play goal, and Brydges and Teasdale scored one goal and had two assists each. Hawks veterans supplemented the newcomers’ scoring — Schwartzmiller led Sheridan with six goals and two assists and Cummings had two goals and six assists.

The physicality of the games influenced the outcome, as the Hawks scored twice when shorthanded, twice when on the power play and allowed Bozeman its only goal of the weekend during an Icedogs power play.

Numerous penalties impacted the flow and rhythm of the games, and Sheridan continues to figure out its chemistry with its newest additions — odd-man rushes materialized through the neutral zone and turnovers popped up as products of the Hawks miscommunication.

“We’re getting there,” Scheib said Sunday. “... But we had some pretty good chemistry going on this afternoon.”

Sheridan will continue its efforts against the Helena Bighorns at the Whitney Rink in the M&M’s Center at 7:30 p.m. Friday and Saturday.