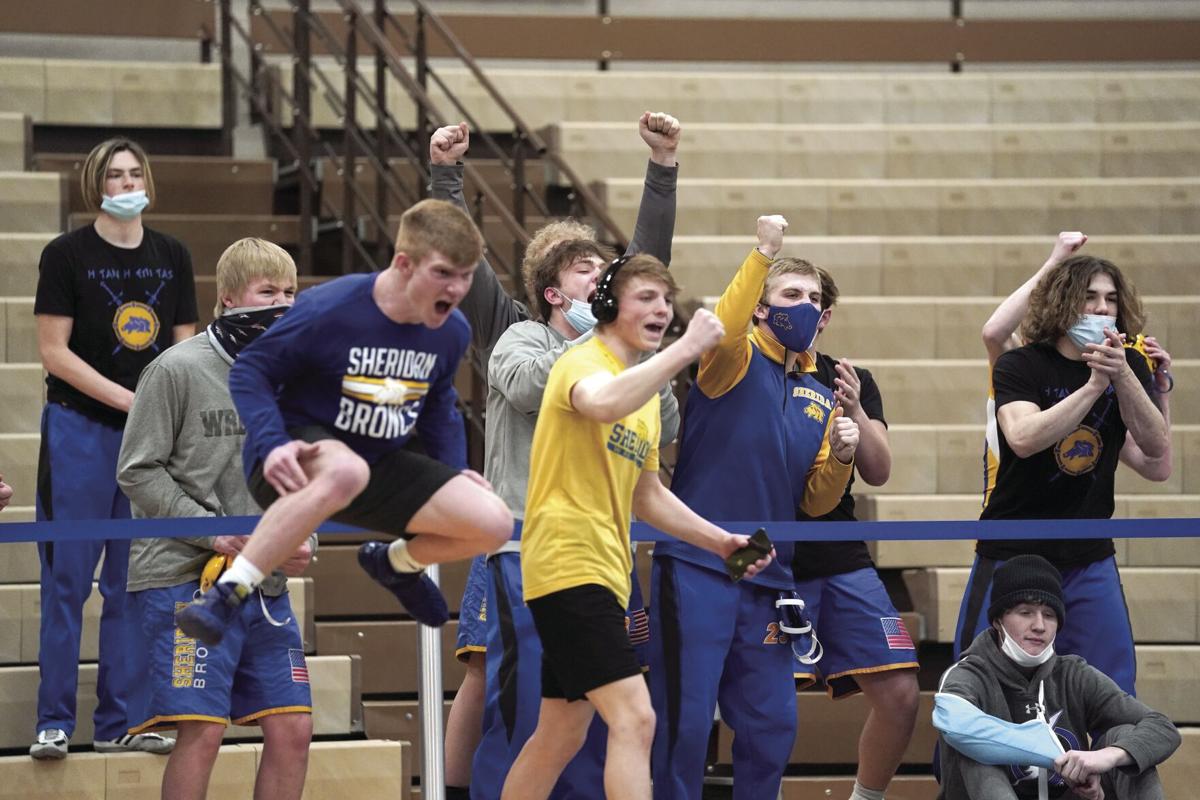 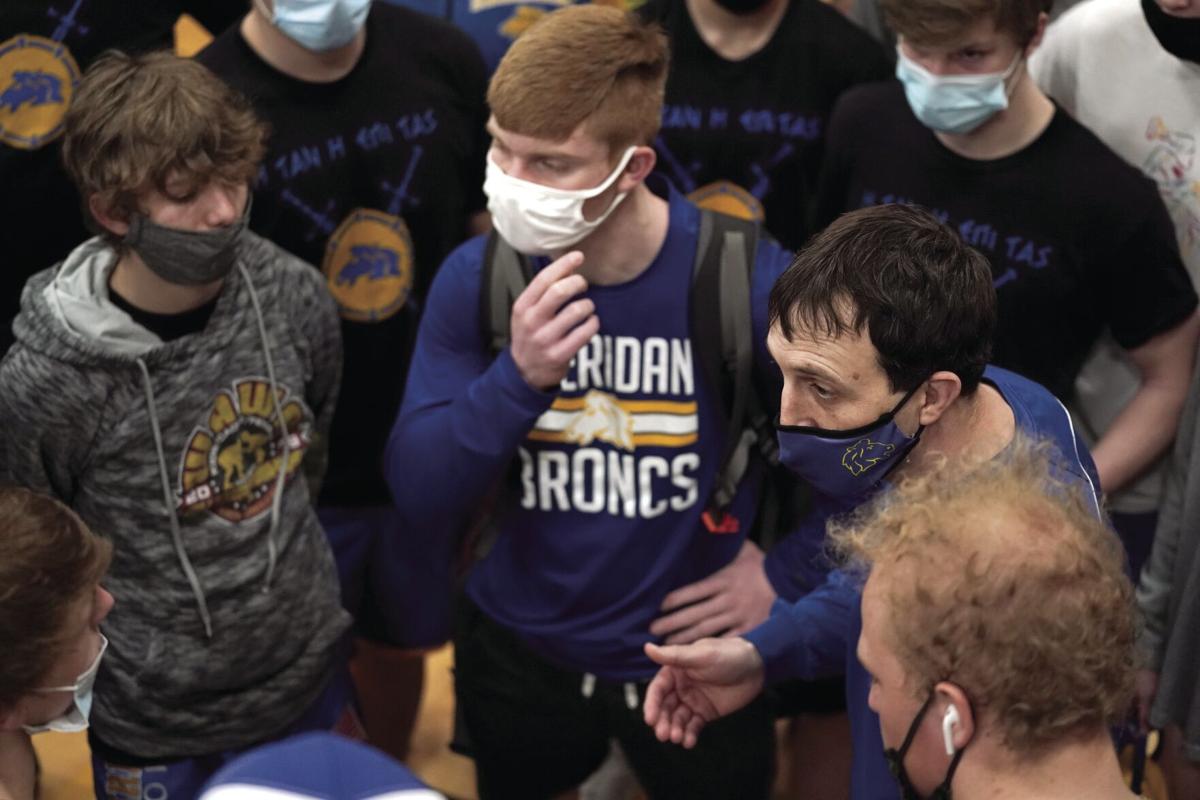 Sheridan head coach Tyson Shatto has a quick word with the wrestling team before the start of the semi-finals during regionals Friday, Feb. 19, 2021. 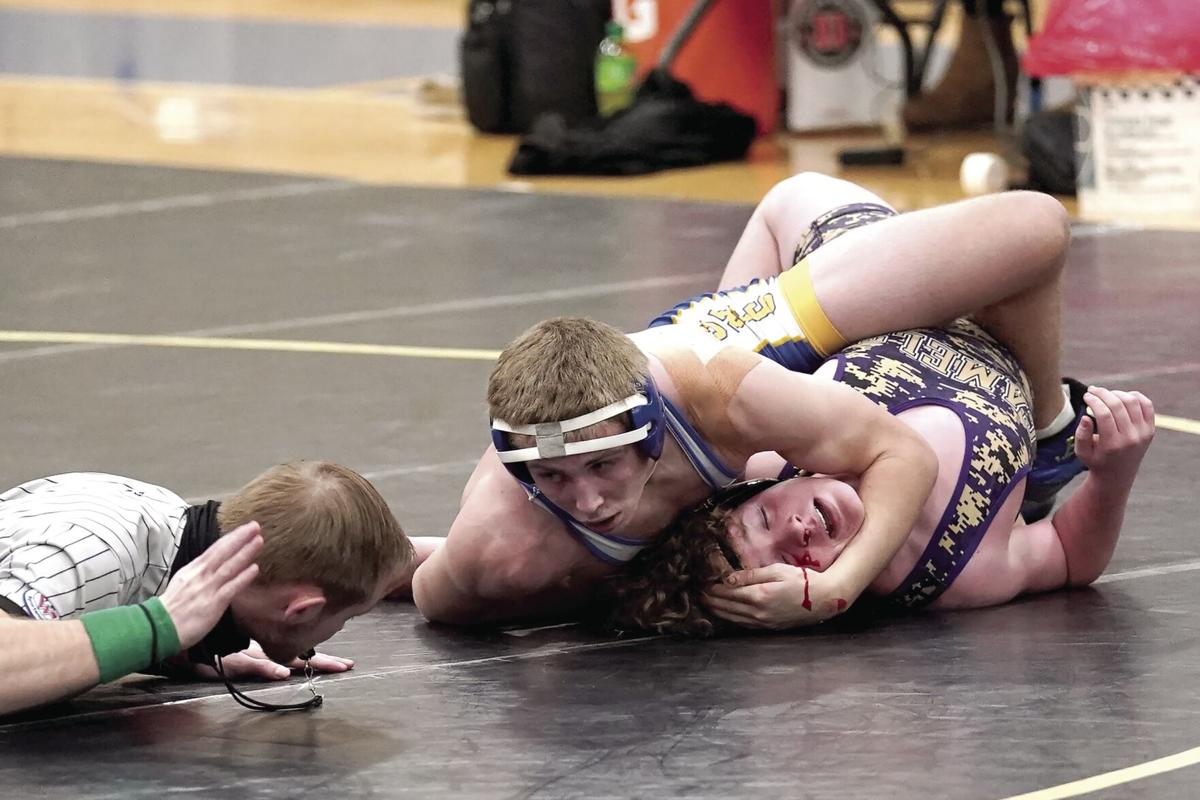 Sheridan’s Terran Grooms makes eye contact with ref as he pins his opponent from Campbell County during regionals Friday, Feb. 19, 2021. 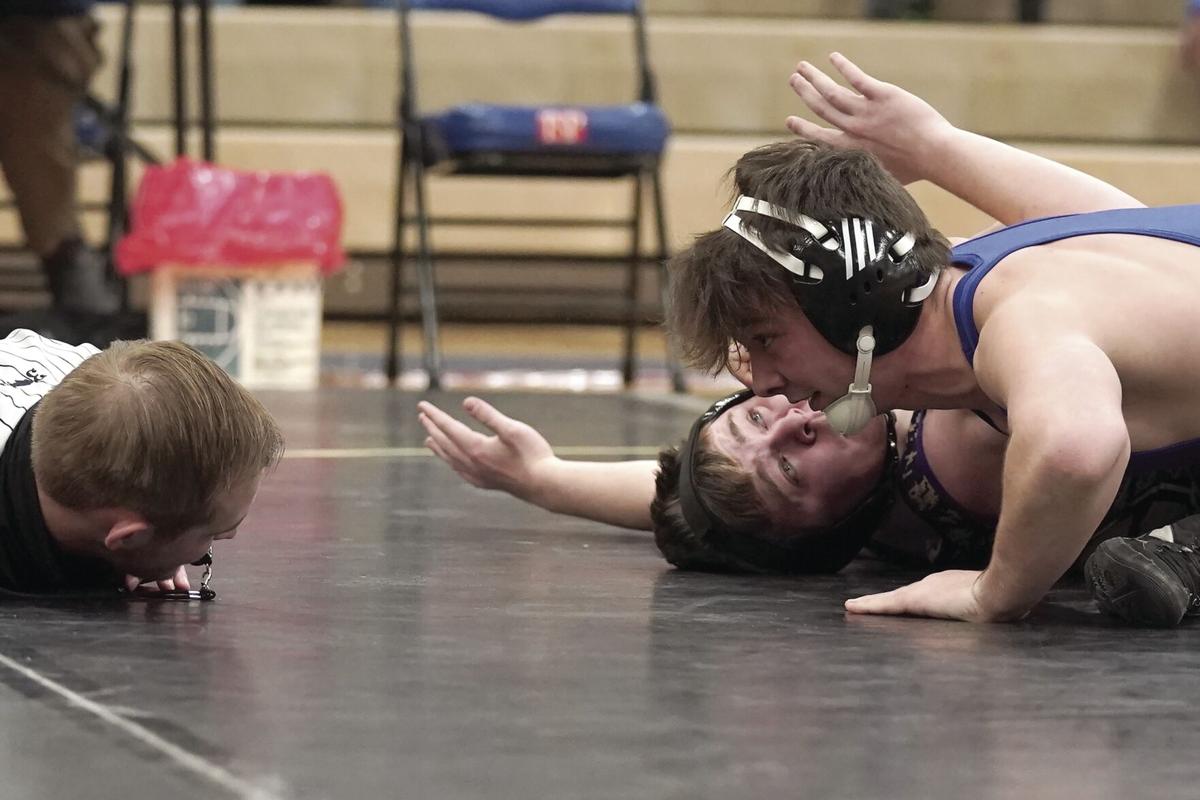 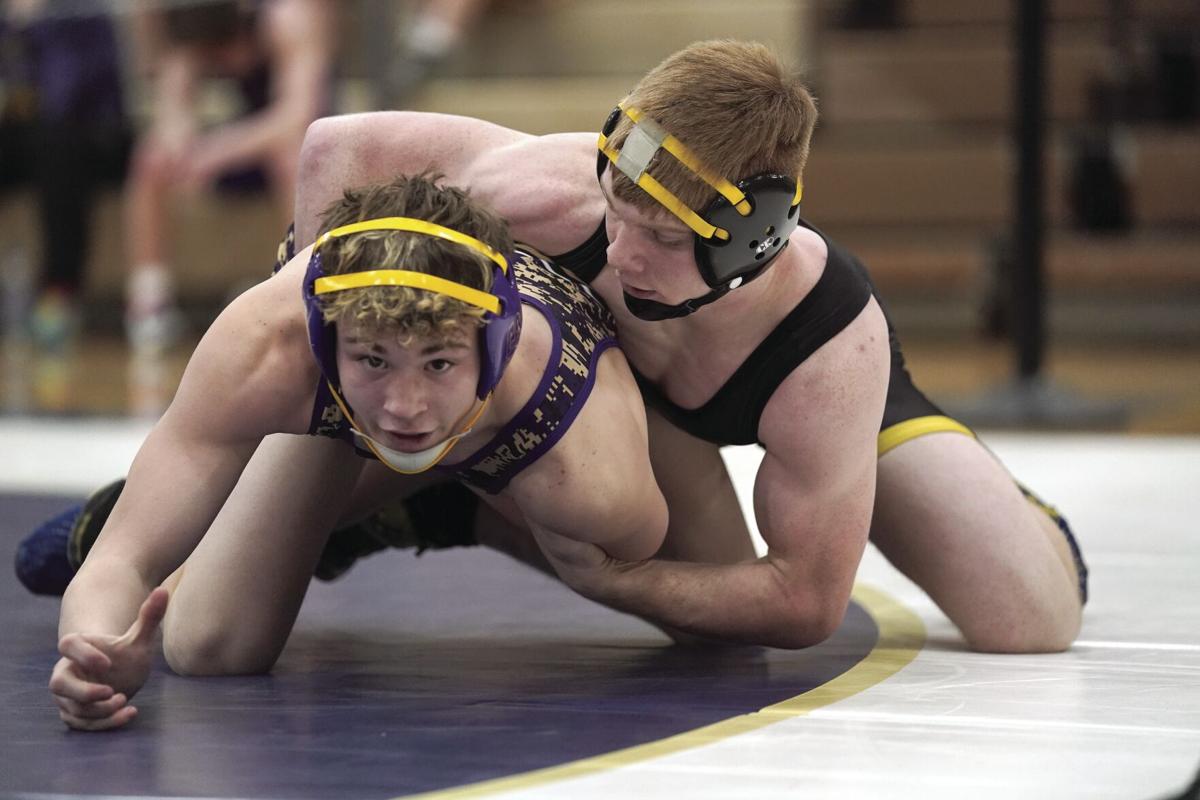 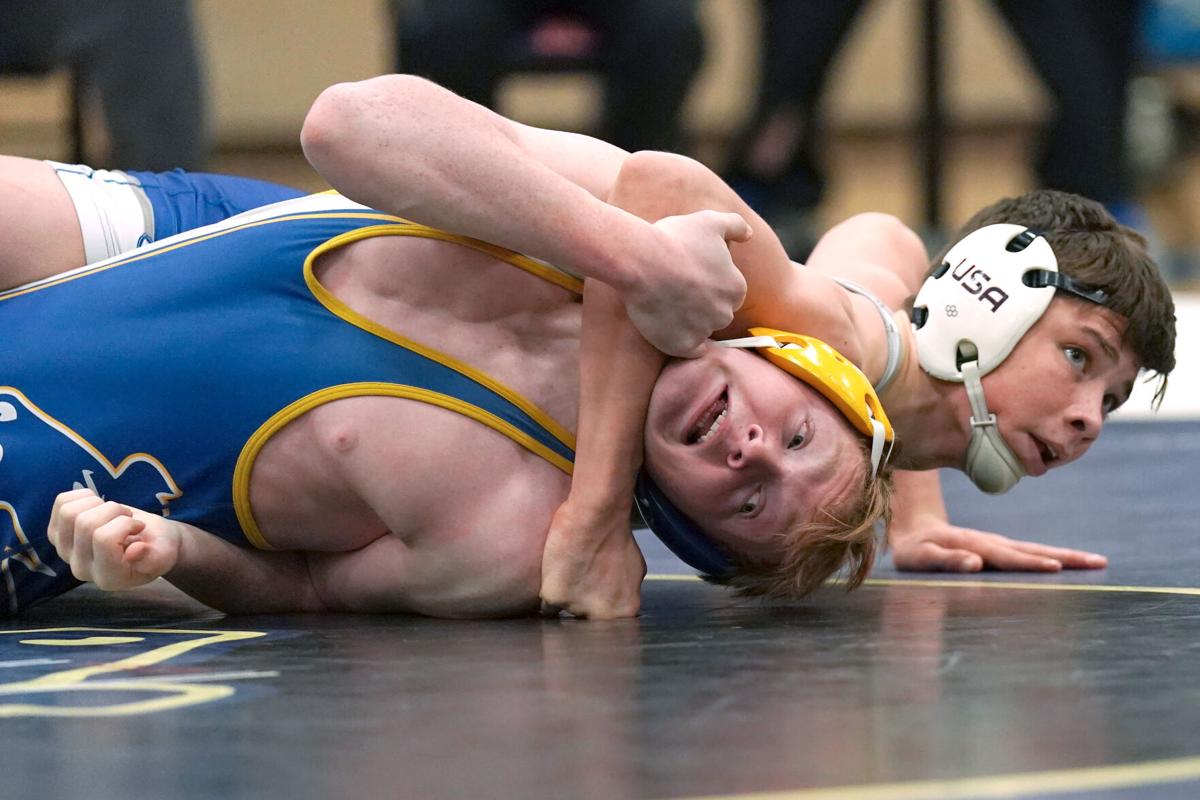 Sheridan head coach Tyson Shatto has a quick word with the wrestling team before the start of the semi-finals during regionals Friday, Feb. 19, 2021.

Sheridan’s Terran Grooms makes eye contact with ref as he pins his opponent from Campbell County during regionals Friday, Feb. 19, 2021.

SHERIDAN — As the 4A Northeast Regional wrestling tournament progressed through the quarter finals, consolation semifinals, semifinals and championship matches Friday afternoon, the volume in the Sheridan High School gym rose as coaches, teammates and fans of the Broncs, Thunder Basin Bolts and Campbell County Camels cheered for their athletes.

The championship matches, most of them between Sheridan and Thunder Basin wrestlers battling for coveted team points, featured a match that reached quadruple overtime, Sheridan wins by pins and loses by decisions. The various ways in which the Broncs both won and lost heightened the tension in the gym as the teams awaited official word of the team scores.

When SHS Activities and Athletics Director Don Julian, who served as the public address announcer for the tournament, cleared his throat to announce the final team scores it was only fitting the gym fell near silent for the only time during the afternoon.

Cheers rippled through the Broncs team huddled in front of their home fans' stands who similarly celebrated, and several wrestlers raised their fists in jubilation as Julian continued.

“It feels awesome,” junior Brock Steel said. “There’s not a lot to say other than, it feels pretty cool. After all the work we’ve put in, you can see it paying off.”

“It feels amazing,” senior Reese Osborne added. “The team is overjoyed right now, but we know we’ve still got work to do. Today was a little too close for our comfort, so we’re going to go back to the practice room and work hard and prepare for next week.”

The late morning and early afternoon featured nearly equal excitement as the Broncs, Bolts and Camels wrestled tournament style for the first time this season defined by coronavirus restrictions and weekends of dual meets. Preparation for Sheridan took the form of conscious hydration and upperclassmen sharing the challenges of tournaments with underclassmen.

Senior Hunter Goodwin said fatigue didn’t play too big of a factor into the Broncs’ performances, though he wished he had wrestled with consistent intensity throughout his championship match against Thunder Basin freshmen Jais Rose. Goodwin won 14-5 by major decision, but Sheridan could have used the additional team points by pin.

Head coach Tyson Shatto said the Broncs will address technique, conditioning and intensity this week during practice, as they will need to secure as many wins by pin next Saturday at the 4A State Championship tournament in Casper. With a greater number of teams at state, there will be fewer opportunities to earn points toward team totals and the ultimate goal of a state championship title.

“We can’t get complacent,” Shatto said. “That’s what we’re going to focus on — going back and doing what we’ve been doing every week, which is starting back Monday with what we need to work on and build momentum as we get to the tournament.”

Shatto highlighted the importance of Sheridan’s entire roster’s performance — even if Broncs didn’t wrestle in the championship matches Friday they secured a spot at the 4A State Championship tournament by winning a semifinal or consolation semifinal match. Additionally, all wrestlers’ wins earned points toward the Broncs’ team total and/or blocked their opponents from earning points.

The understanding showed when sophomore Landon Wood wrestled Thunder Basin’s junior Alex Draper on mat No. 1 for the 120-pound regional championship and Broncs teammates and fans alike cheered Wood just as loudly as they cheered for sophomore Kolten Powers wrestling for third place in the 113-pound weight class on mat No. 2.

Several matches later, Osborne pinned Thunder Basin senior Dylan Catlin in 1:26 and elicited raucous cheers from the home crowd. Along with Osborne, sophomore Colson Coon (160 pounds), senior Hayden Crow (170) and Steel (182) were the only Sheridan wrestlers to pin their opponents in the championship matches.

Tough losses by decision for other senior Broncs should fuel their fire, Shatto said, though Steel, Osborne and Goodwin shared the same passion Friday that has defined Sheridan’s season — wanting to win for the team and win for their “brothers.”

“Coach Shatto preaches it every week, ‘We come to wrestle to win, we’re not coming to wrestle to not lose,’” Goodwin said. “That means always attacking and not just trying to hold on to a lead.”

Before the championship matches, Shatto reminded his undefeated team in a huddle in the corner of Sheridan’s gym, “this is what you’ve been working for all season.” But Shatto and the Broncs know they have one more weekend of competition to put their passion to the test.

Sheridan travels to Casper for the 4A State Championship tournament next Saturday. The first rounds of competition will begin at 8:30 a.m. and championship matches are scheduled for 4:30 p.m.

Below is the full list of Sheridan wrestlers who placed in the top four in each weight class who earned spots at the 4A State Championship. Complete results from the 4A Northeast Regional tournament can be found here.