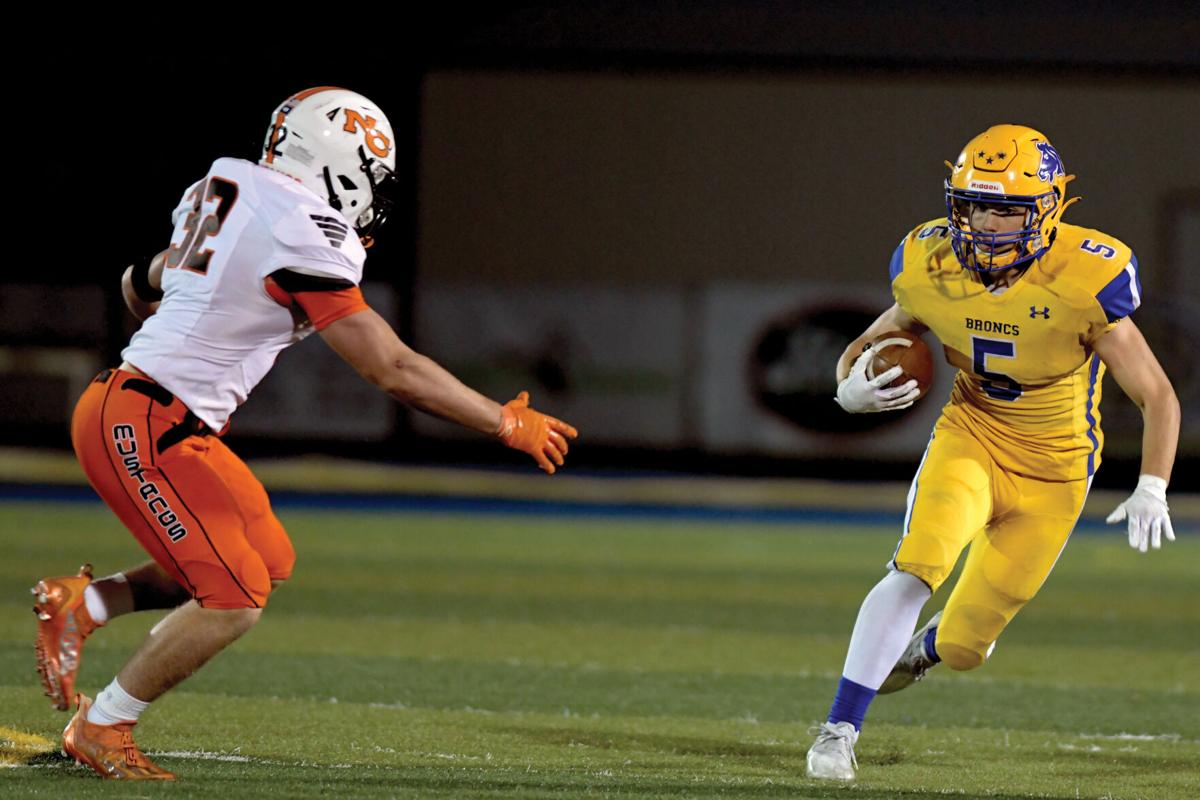 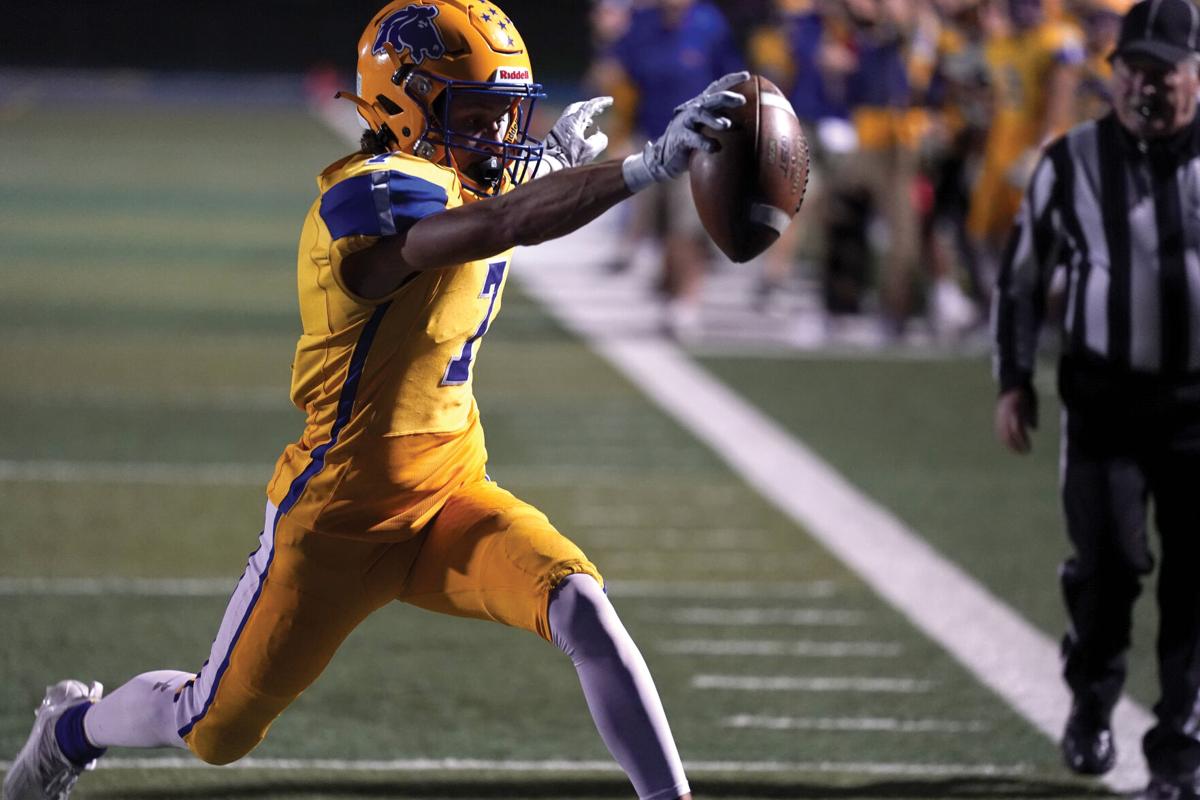 Sheridan's Dom Kaszas (7) reaches out as he crosses into the end zone to score the Broncs' first touchdown of the night against Natrona County Friday, Oct. 1, 2021. Sheridan defeated Natrona County 27-0. 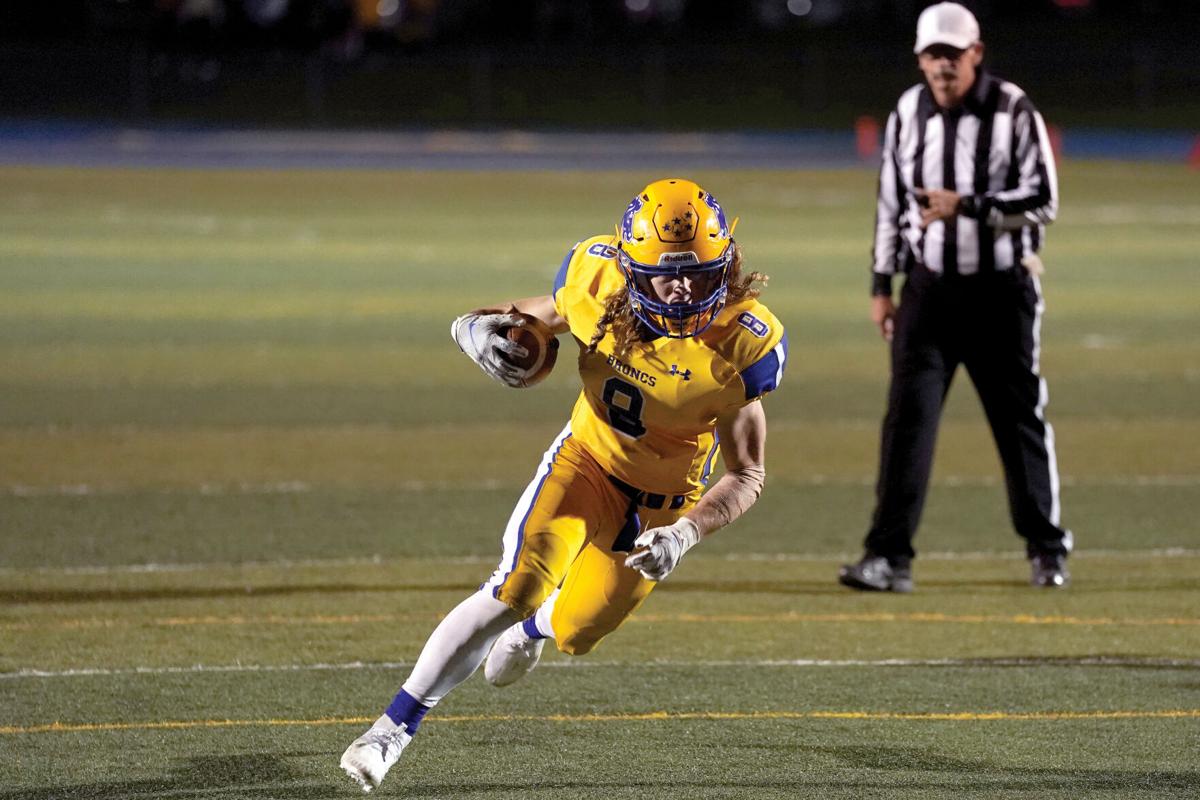 Sheridan's Carter McComb (8) runs for a first down during play against Natrona County Friday, Oct. 1, 2021. The Broncs broke the Mustangs 27-0. 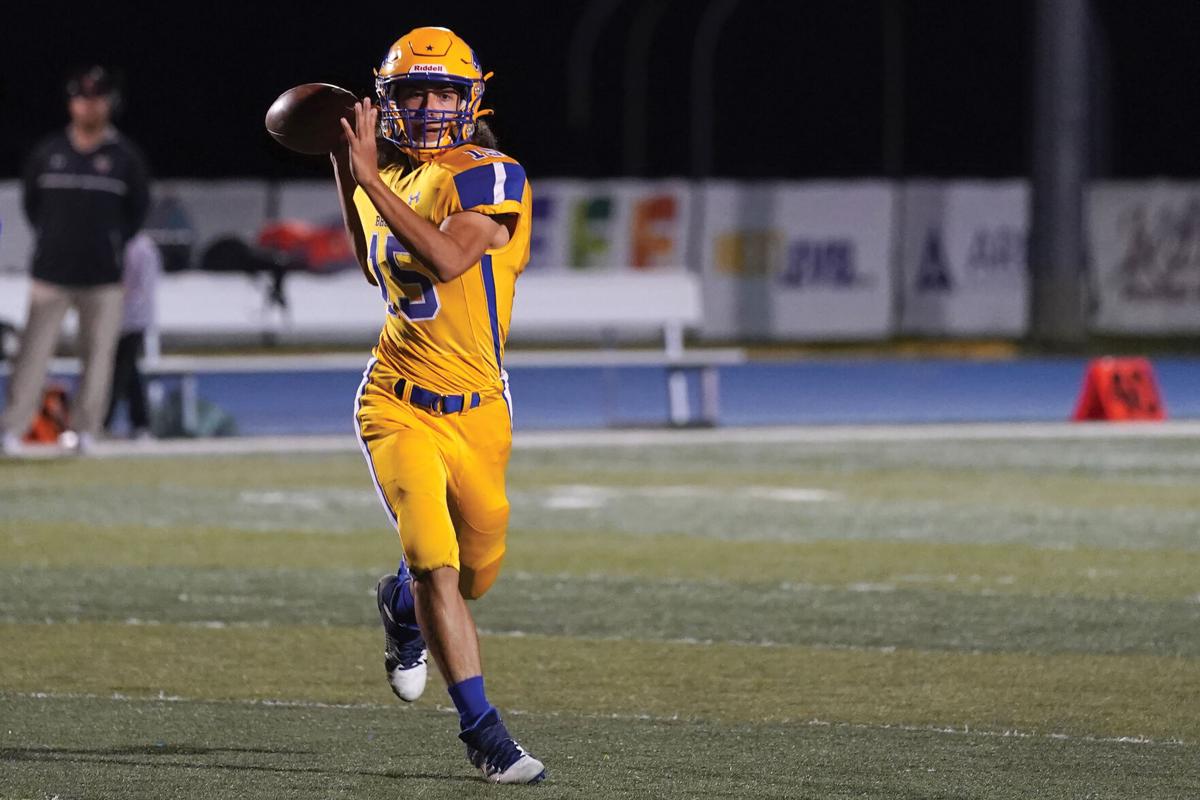 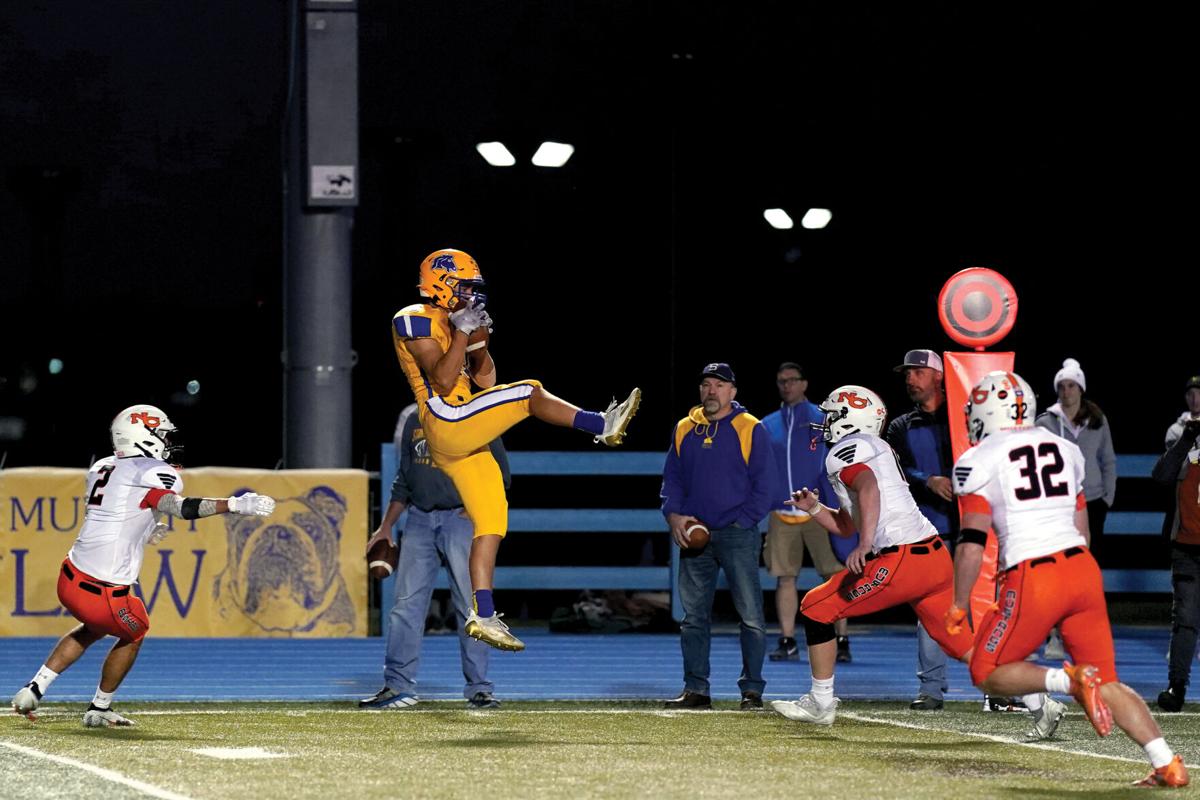 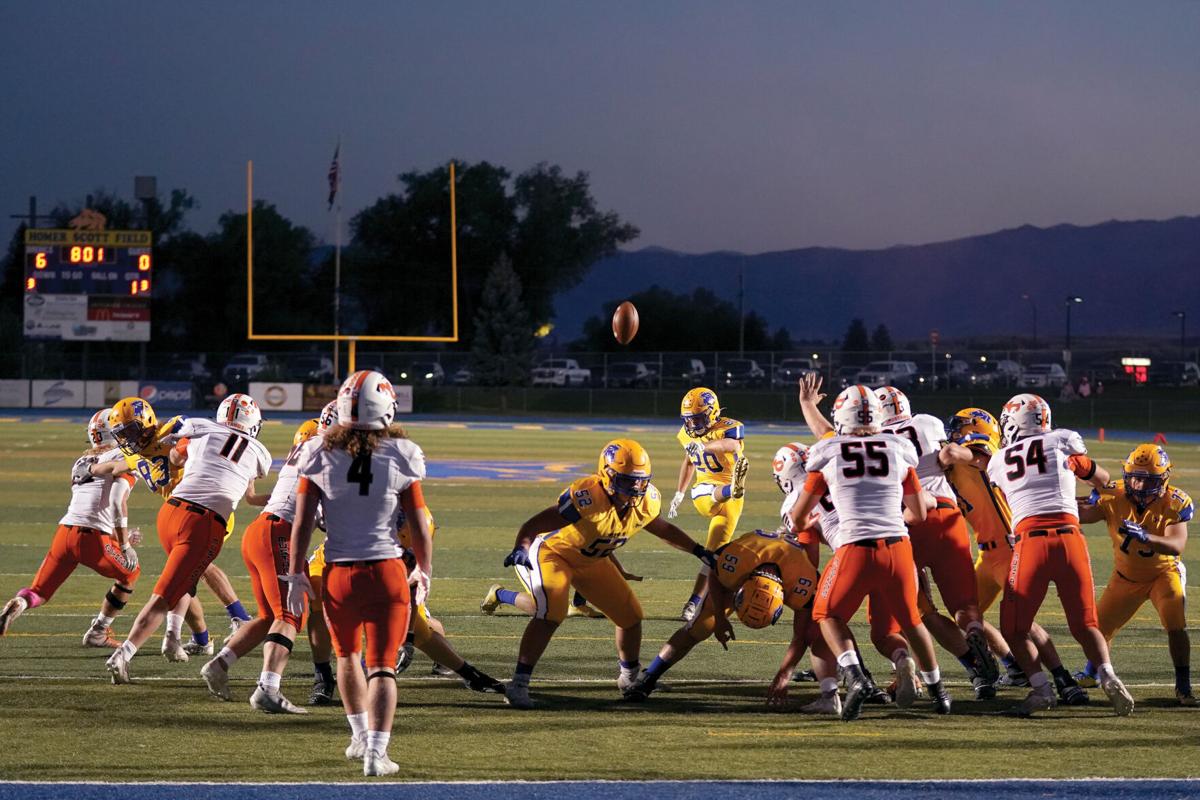 Sheridan's Dom Kaszas (7) reaches out as he crosses into the end zone to score the Broncs' first touchdown of the night against Natrona County Friday, Oct. 1, 2021. Sheridan defeated Natrona County 27-0.

Sheridan's Carter McComb (8) runs for a first down during play against Natrona County Friday, Oct. 1, 2021. The Broncs broke the Mustangs 27-0.

SHERIDAN — As the final seconds ticked off the clock before halftime Friday, Colson Coon stretched his legs.

The junior had to make sure they weren’t sore after carrying a heavy first-half load and helping the Sheridan Broncs to a 14-0 halftime lead over Natrona County.

And if the Broncs’ lead didn’t feel safe after two quarters, it did soon after.

They continued to roll in the second half, winning 27-0 at Homer Scott Field. They bounced back to earn their fifth win of the season after suffering their first 2021 defeat last week at Cheyenne East.

“Any time you can get a win against Natrona County, it’s a good thing,” head coach Jeff Mowry said. “It’s a good football team. But we played better than we did a week ago. I think this shows our kids, if we have a good week of practice and preparation, we can come out and execute and do some good things.”

The blowout result came as a surprise, with both teams ranked among the top five 4A squads in the state before the contest.

Sheridan received the opening kickoff and marched down the field, taking a 7-0 lead. Senior Carter McComb punched it into the end zone from three yards out.

On the Broncs’ next possession, their offense stalled, but Coon faked a punt and rumbled for 24 yards and a first down. Senior quarterback Carl Askins and junior wide receiver Dominic Kaszas connected for an 11-yard touchdown pass to push Sheridan’s lead to 14-0.

“It was really important (to grab an early lead),” Coon said. “It just built up, and we kept rolling.”

Neither team scored in the second quarter.

Thirty seconds before halftime, the Mustangs were driving. They advanced inside the Sheridan 25-yard line and threatened to cut their deficit to one score before intermission.

Then, senior Chris Larson bulldozed the Natrona County quarterback, stripping him off the ball and recovering it to protect the Broncs’ advantage.

“I just saw the quarterback start running, and I just dove out to get him,” Larson said. “I didn’t even try to get the ball.”

Like the first, Sheridan controlled the second half from start to finish. In the third quarter, senior kicker Michael Greer booted two field goals. In the fourth, Texas Tanner added a touchdown to seal it, 27-0.

Because the Mustangs, normally a running team, fell behind early, they were forced to throw 36 times. They rushed only 19 times for 55 yards.

Sheridan ran 47 times for 237 yards. It completed 11 passes for 101 yards. Mowry said featuring the run game was the game plan coming in.

The Broncs even lined up with Coon taking snaps in the wildcat formation several times, including his opening touchdown.

The Broncs have three games remaining in the regular season. Next Friday, they will host Kelly Walsh for a 7 p.m. kickoff. The game will air on the NFHS Network.