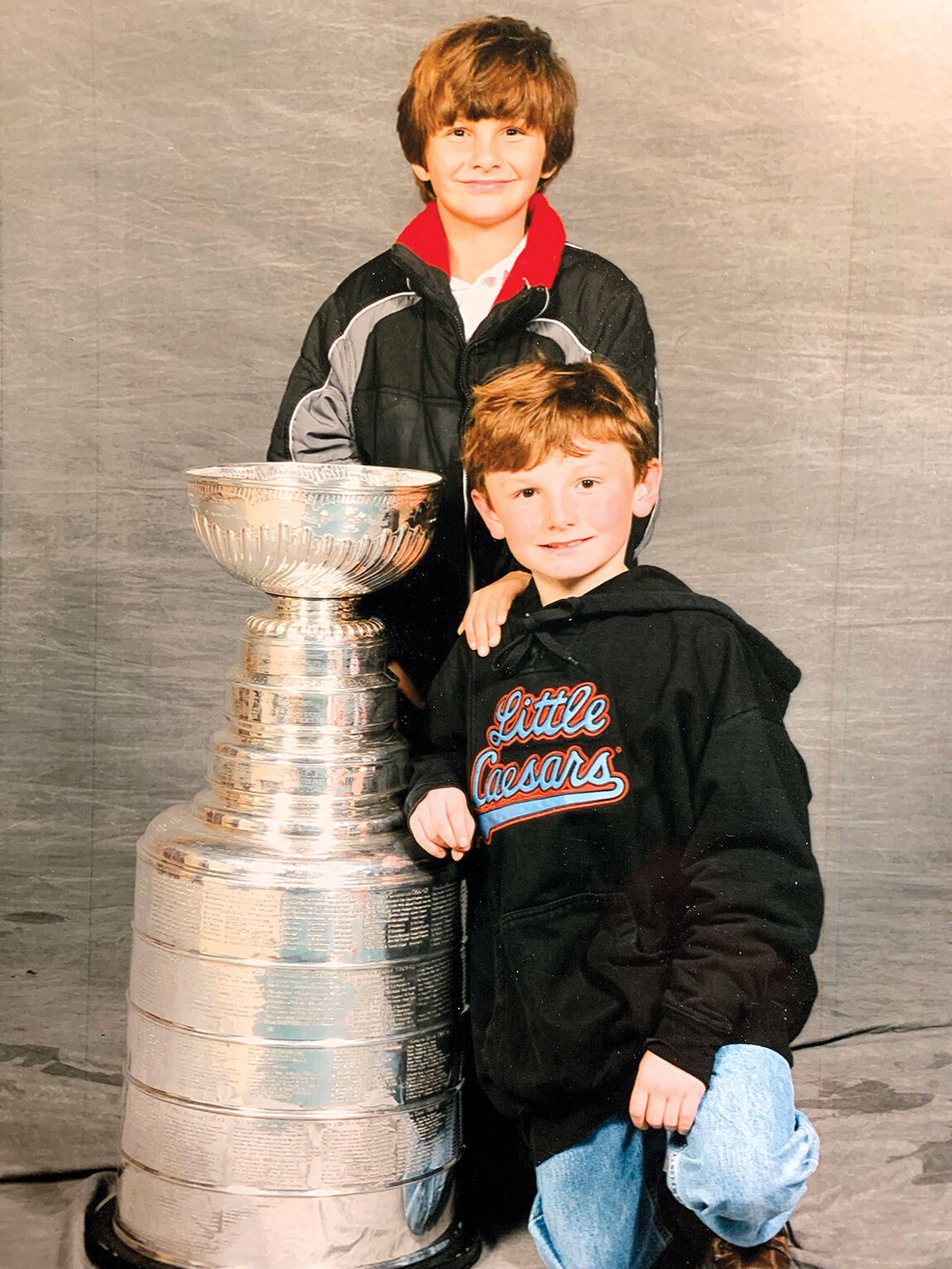 Joseph Teasdale, back, and brother Jonathon pose with the Stanley Cup when they were 10 and 12 years old, respectively. The Teasdale brothers play for the NA3HL Sheridan Hawks this season, Joseph as a forward and Jonathon on defense. 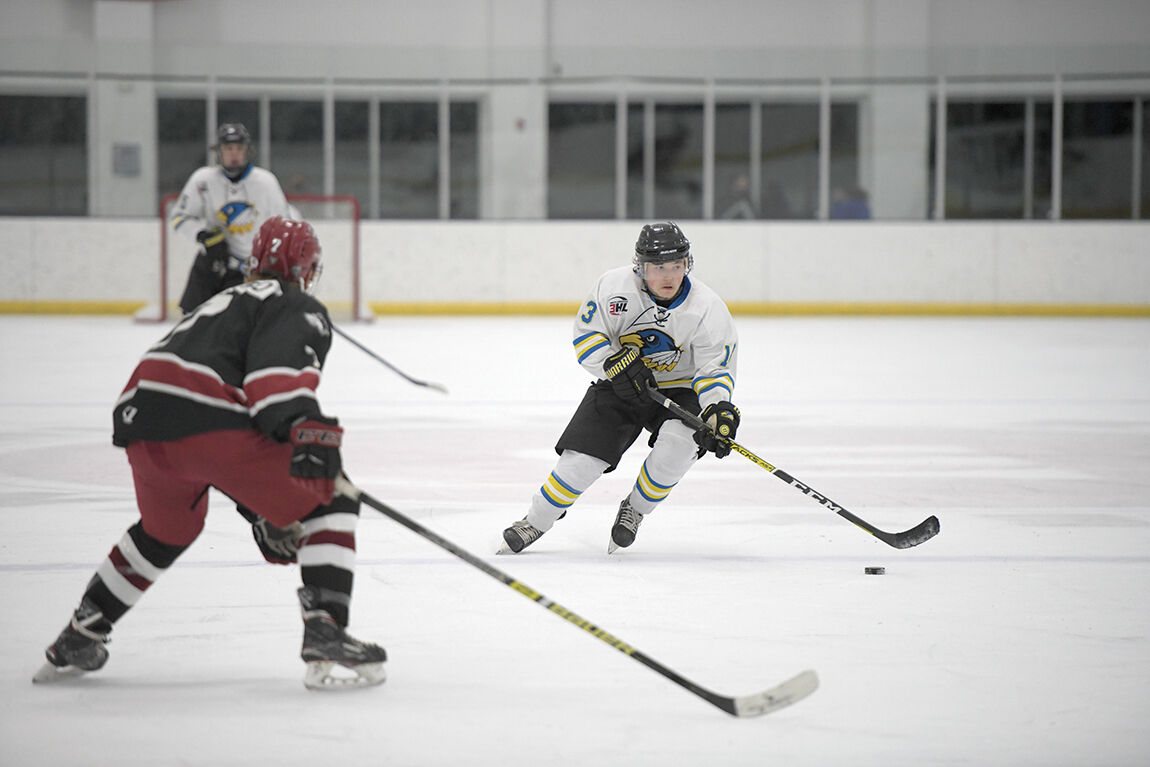 The Hawks’ Jonathaon Teasdale (13) brings the puck down the ice during a power play against Bozeman Saturday, Nov. 14, 2020. Teasdale started skating when he was 2 years old and playing hockey when he was 3, but last weekend was the first time he played with younger brother Joseph. 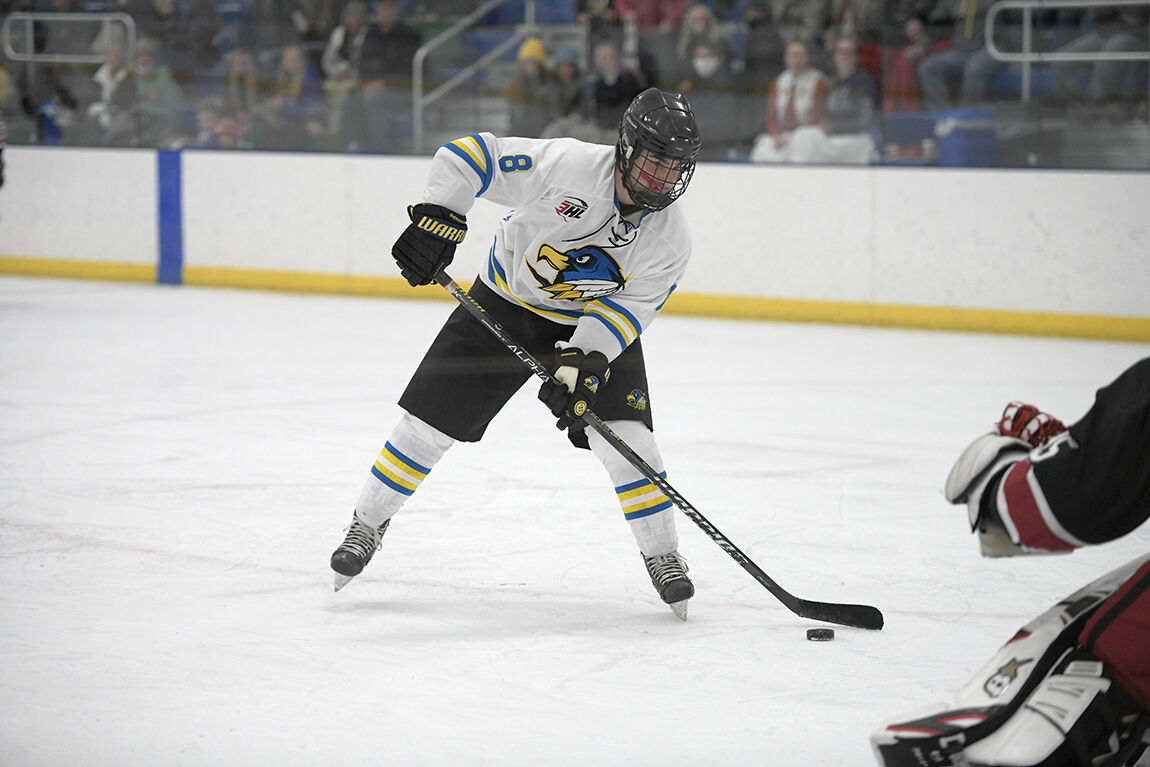 The Hawks’ Joe Teasdale (8) flips the puck over the Icedogs’ goalies glove to score Saturday, Nov. 14, 2020. The goal was Joe’s first with the Hawks after he joined the team last week to play with his brother Jonathon. 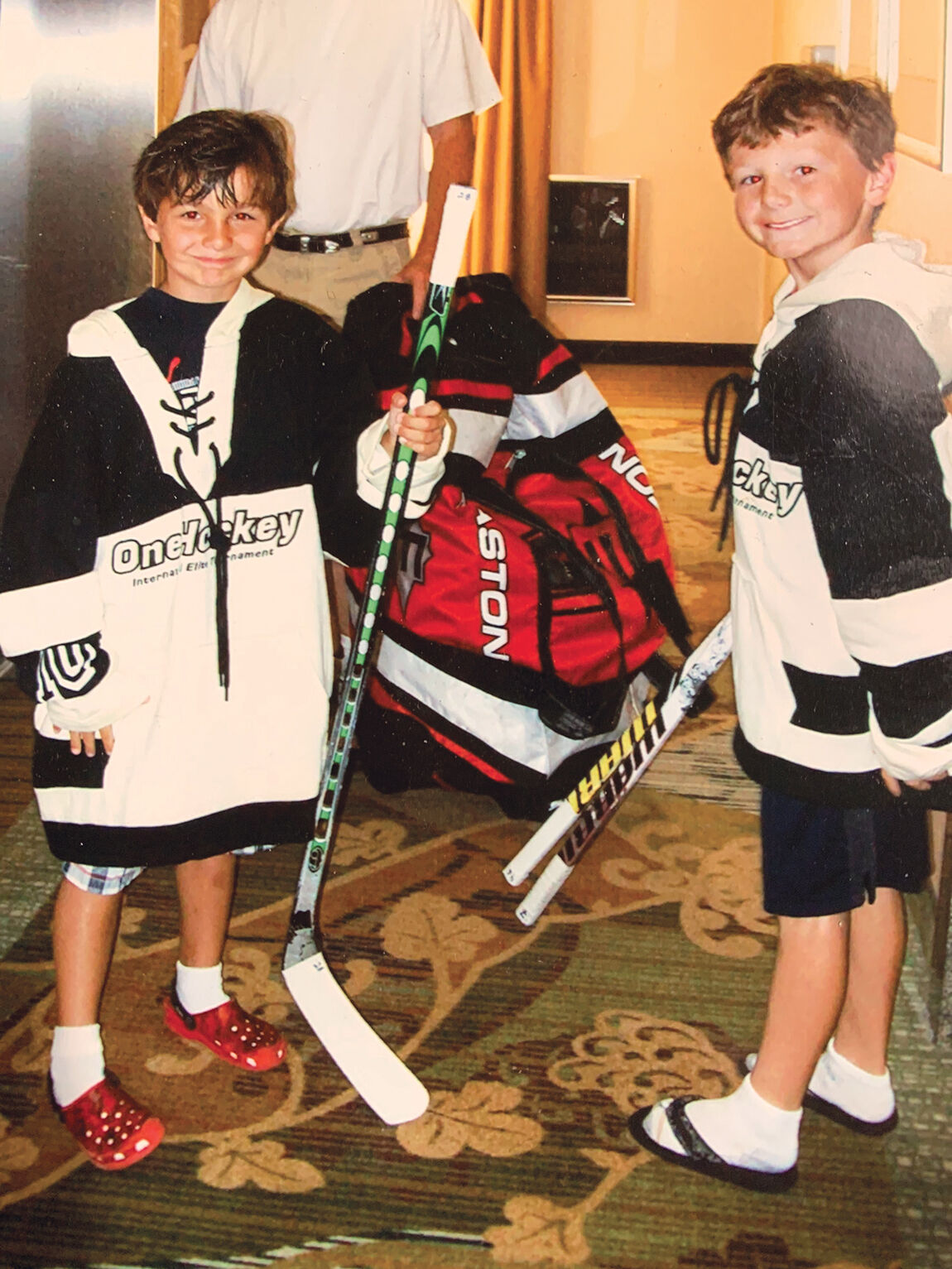 Joseph Teasdale, left, and brother Jonathon, ages 7 and 9, prepare in Philadelphia for a hockey tournament. The brothers grew up playing hockey together but never on the same team until last weekend when they played for the Sheridan Hawks against the Bozeman Icedogs.

Joseph Teasdale, back, and brother Jonathon pose with the Stanley Cup when they were 10 and 12 years old, respectively. The Teasdale brothers play for the NA3HL Sheridan Hawks this season, Joseph as a forward and Jonathon on defense.

The Hawks’ Jonathaon Teasdale (13) brings the puck down the ice during a power play against Bozeman Saturday, Nov. 14, 2020. Teasdale started skating when he was 2 years old and playing hockey when he was 3, but last weekend was the first time he played with younger brother Joseph.

The Hawks’ Joe Teasdale (8) flips the puck over the Icedogs’ goalies glove to score Saturday, Nov. 14, 2020. The goal was Joe’s first with the Hawks after he joined the team last week to play with his brother Jonathon.

SHERIDAN — At the Whitney Rink in the M&M’s Center last Saturday, two NA3HL Sheridan Hawks jerseys bore the name “Teasdale” across the back. Jonathon took the ice wearing No. 13 just before his younger brother Joseph, who donned a No. 8 sweater and a full-cage.

For the first time in their competitive hockey careers, the Teasdale siblings took the ice together.

“One day, you’re just getting ready with him in the locker room and then you’re on the ice together,” Jonathon said. “Just to look over and see your brother, it’s definitely something that I will never forget — it’s cool. It’s definitely a good feeling.”

Jonathon, 20, stands two inches shorter than Joseph, 18, and plays on the blue line while Joseph plays forward. They both shoot left, see the game similarly and have spent the majority of their lives on or around a hockey rink.

The siblings sport the same brown eyes and brunette hair, though Jonathon’s curls at the end while Joseph’s lies flat. The pair’s face shapes prove they’re related and, when they start to describe each other, the way in which they talk makes the relatedness evident.

Jonathon was quick to jump in, “That’s not true.”

Jonathon transitioned to talking about their on-ice differences.

“I mean, I’m a little bit more scrappy than he is,” Jonathon said.

“Jon’s a little bit feistier, especially in the fights at home,” Joseph said, then added, “No, no, just kidding.”

Their love for the game started the same way in Macomb Township, Michigan. Mother Joanna Teasdale remembers 2-year-old Jonathon wanting to skate after seeing his friend and cousin playing hockey. When father John Teasdale took Jonathon shopping one day, Jonathon ran to a box of mini sticks and a net and brought them home to begin a years-long saga of basement mini-stick battles.

A family friend took John and Jonathon to a rink in Clinton Township soon after, laced the toddler’s feet into skates and held Jonathon’s tiny blades to the ice while skating around. Thus, the Teasdale clan transformed into a hockey family.

When Jonathon turned 3, he started playing ice hockey and began playing on a team at 4 years old. During that time, a 2-year-old Joseph attended Jonathon’s practices and games, bringing a mini stick to the rink and hitting a tennis ball against the boards.

Joanna had to hold Joseph back whenever the door to the ice opened, as the younger Teasdale wanted to play hockey as soon as possible, as well. The game pulled the brothers together and made them “inseparable.”

“That’s all they were doing was hockey with the hockey net in the basement,” Joanna said. “They couldn’t get enough of it.”

As the siblings grew up, Jonathon opted to play high school hockey while, as Joseph grew older, he chose to play AAA hockey — the highest level of minor ice hockey. Both said their decisions were born from different opportunities that arose at the time and don’t regret their choices.

The defenseman played 47 games for the Hawks and recorded 44 points (13 goals, 31 assists) in 2019-20, while Joseph played for the Tier II North American Hockey League’s Jamestown Rebels. The hockey season served as the longest time the siblings had ever spent apart and, though always close, Joanna said she saw “distance made the hearts grow fonder.”

Jamestown ceased operation for the 2020-21 season due to COVID-19, and Joseph found himself at home in Michigan when Jonathon rejoined the Hawks for the NA3HL’s season. The older Teasdale told his brother about the town and community, and both wanted to play together to not worry their parents.

“I wanted to start playing hockey again, and I thought it would be a good fit,” Joseph said, “and I’d be with my brother.”

The Sheridan-native Billings brothers play for the Hawks, but head coach Andy Scheib said age gaps between siblings makes it uncommon for brothers to play on the same team together. Scheib noticed the younger Teasdale’s work ethic matched his older brother’s when Joseph arrived.

Hawks veteran forward Peyton Kesselhon also disputed Joe’s claim about the older brother being more shy and noted Jon’s commitment to improving himself and the Hawks — the defenseman typically takes the ice 30 minutes before practice or the game-day skate.

“[Jon’s] a very outgoing guy,” Kesselhon said. “He helps the team out. He’s always in the locker room getting us going, just yelling and screaming.”

Fellow forward Zach Brydges played with Joseph in Jamestown last year, and Joseph now billets with his former teammate. After playing with Jonathon for a couple games this season then having Joseph join Sheridan’s team, Brydges said the brothers are more similar than not.

“[Joe] has this positive, happy energy,” Brydges said. “And he’s just a good guy to be around.”

Now Joseph serves as a companion and competitor for Jonathon’s pre-practice routine, and the pair hopes to grow more comfortable with each other during the remainder of Sheridan’s season.

“For us playing together, we already have the chemistry but once we get going more, it’ll be really good because he’s a scorer and I’m a passer,” Jonathon said. “I’m always looking for him on the ice.”

The Teasdales consider themselves morning people, though Jonathon drinks coffee and Joseph does not. They listen to the same music but watch different television shows and claim different circles of friends back home. When asked about their favorite memories of each other growing up, they recall different moments.

“Locker boxing on the hill,” Jonathon said immediately, and the duo laughed before Jonathon went on to explain he and Joseph would wear their hockey helmets and gloves and fight each other atop a hill near their childhood home.

Joseph remembers his high school hockey team playing in the state championship and scoring a game-winning goal in the final minute in front of where Jonathon sat watching. The brothers celebrated on opposite sides of the glass, and the Teasdales still watch the video of the game to relish the memory.

And Joanna recalls the countless hours the boys spent playing hockey in the basement or driveway.

As the Teasdales played the Bozeman Icedogs last Saturday and Sunday, the sticks they carried were noticeably bigger than the mini-sticks they grew up with and the sheet of ice larger than their Michigan driveway.

“It was weird at first,” Joseph said, “but it’s good seeing your brother out there.”