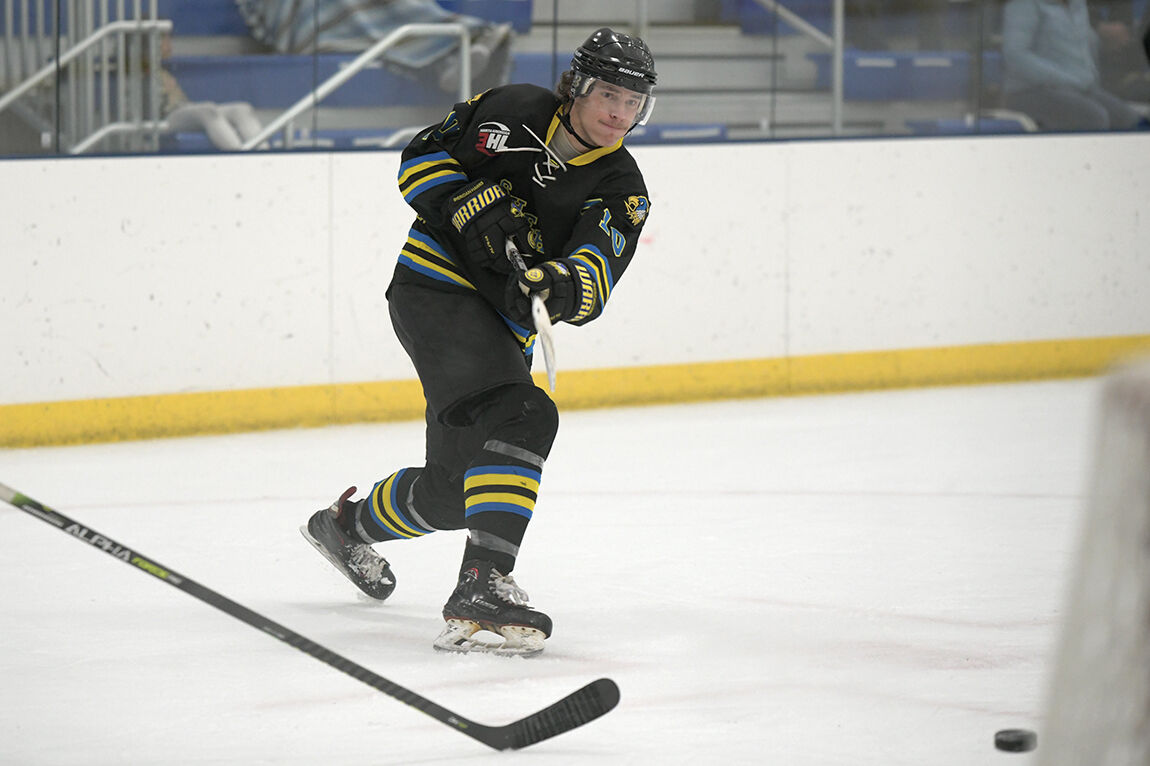 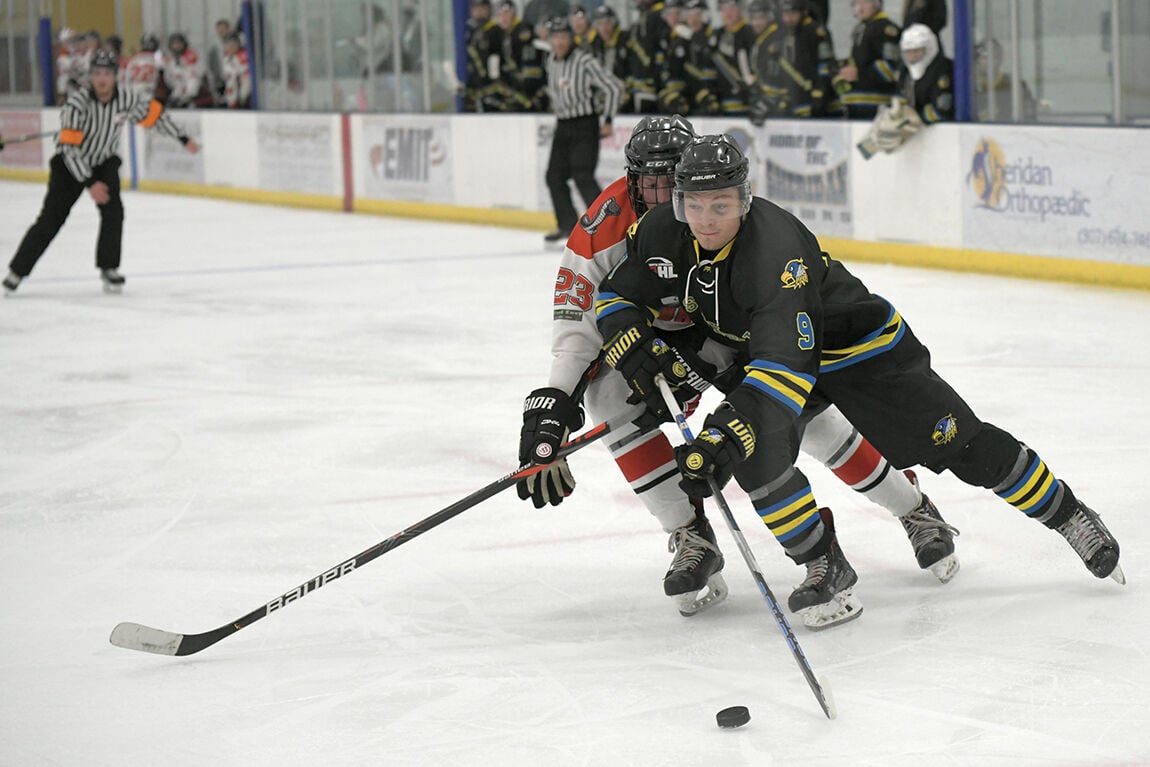 The NA3HL Hawks’ Justin Schwartzmiller (9) bullies his way inside for a shot on goal during game two against Butte Saturday, Oct. 10, 2020.

The NA3HL Hawks’ Justin Schwartzmiller (9) bullies his way inside for a shot on goal during game two against Butte Saturday, Oct. 10, 2020.

SHERIDAN — The NA3HL Sheridan Hawks returned to Whitney Rink at the M&M’s Center Friday and Saturday night to face off against the Butte Cobras, and the Hawks certainly gave their limited-capacity home crowd a show. Sheridan routed the Cobras 21-0 on night one and 18-1 in game two.

But the Cobras finished the 2019-20 season with a mere six wins and only managed five wins the season before, proving to be a lower-caliber opponent for the Hawks, who finished their inaugural season 35-10-1-1 last year and beat Butte all six times the teams met.

“This is tough,” head coach Andy Scheib said after Saturday’s game. “Creating bad habits is the biggest thing you’re trying to stay away from in those situations. You’ve just got to stay the course — keep competing, keep working hard, keep doing what you’re doing.”

The North American 3 Hockey League Hawks improved to 3-1 on the season, while recording impressive stats — Sheridan took a total of 230 shots on net, and every player notched either a goal or assist over the course of the weekend. Four Hawks had hat tricks and goaltender James Downie earned his second shutout of the season Friday.

Scheib favored his team’s Friday performance, as he saw the Hawks play with equal effort throughout the 60-minute competition.

As the game wore on Saturday, players’ focus slipped to their individual performances and a couple Hawks attempted “The Michigan” — the lacrosse-style goal that starts behind the net — eliciting a shouted reminder from Scheib to keep working hard and to not stray from the team’s work ethic.

“Mental focus is a big thing during these types of games,” Scheib said. “It’s just staying focused and working hard.”

Jacob Cummings, Nathan Gilleshammer and Peyton Kesselhon played on a line together for the first time this season. Cummings played with Logan Syrup and Blake Billings against the Bozeman Icedogs last weekend, and Sheridan positioned itself to be top-line reliant.

“It wasn’t too bad,” Cummings said when asked about his new line. “[Gilleshammer] and [Kesselhon] are a lot of fun to play with. We got things done this weekend, so that was a good thing.”

With Cummings on the second line and Luke Desmarais skating with Syrup and Billings, Scheib crafted two offensively lethal lines — the first line scored 12 of the Hawks’ 39 goals during the weekend, while the second also netted 12.

Scheib anticipates keeping those trios together against tougher competition to more accurately measure the lines’ chemistry and point production in the future.

“I thought the Cummings line was really good,” Scheib said. “They were moving the puck. Everyone put up points, so it’s kind of hard to base it off of that.”

Downie stopped all seven shots he faced from the Cobras.

Carson (1g, 2a) and Herz (2a) also had multi-point games from the blueline.

Goaltenders Patric Loefler and Antonio Tarantino each spent time in net. Loefler stopped three of the four shots he saw, while Tarantino stopped all six shots Butte took on him.

“I think what you take away is everyone getting their feels, getting their first points of the year,” Cummings said. “... It brings everyone closer, when you have blowouts like this. It’s really nice.”

The Hawks hit the road for the next four weekends, traveling to Helena to play the Bighorns at 7:05 p.m. Friday and Saturday, and Sheridan next plays at the Whitney Rink Nov. 13 and 14.

“There’s really nothing to take away from these games,” Scheib said. “... We’ve got to stay the course, get back to work next week and be prepared for Helena.”