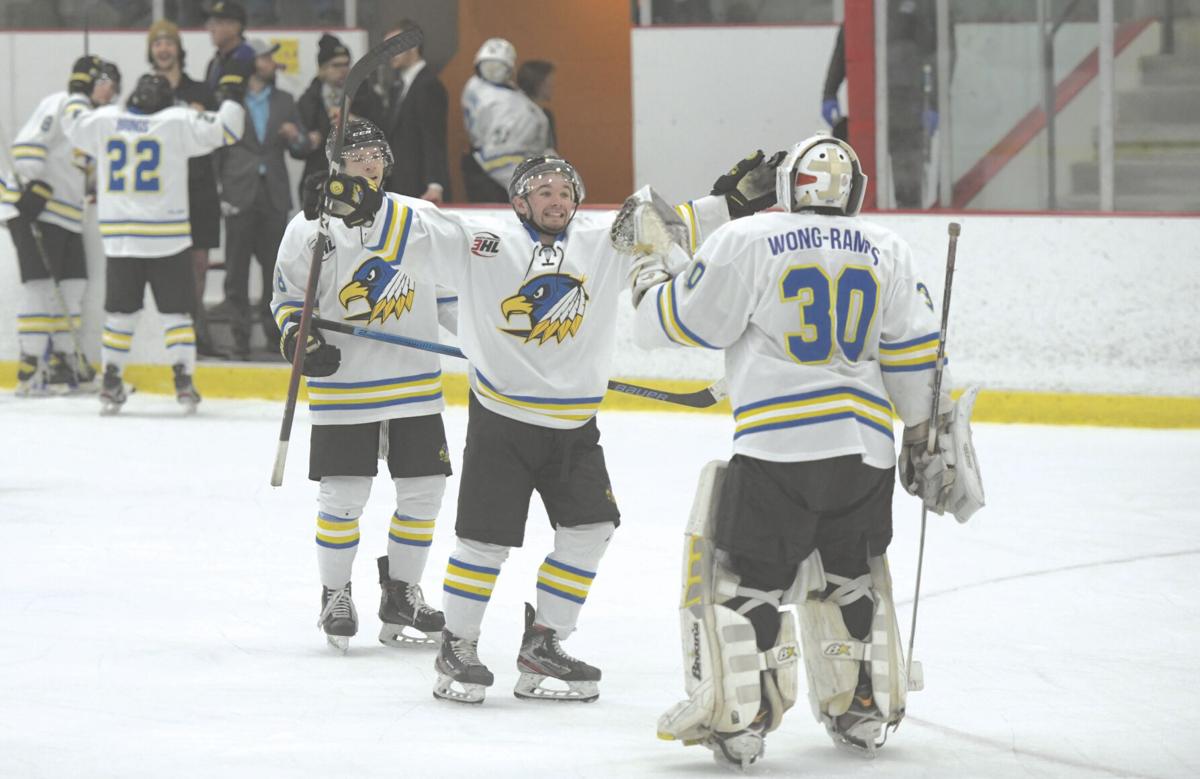 NA3HL Sheridan Hawks defenseman Dakota Kott prepares to hug goaltender Cristian Wong-Ramos at the St. Peters Rec-Plex in St. Peters, Missouri, Thursday April 15, 2021. The Hawks beat the Northeast Generals 13-2 in the Fraser Cup national tournament while setting a record for most goals scored by one team in a single national tournament game. 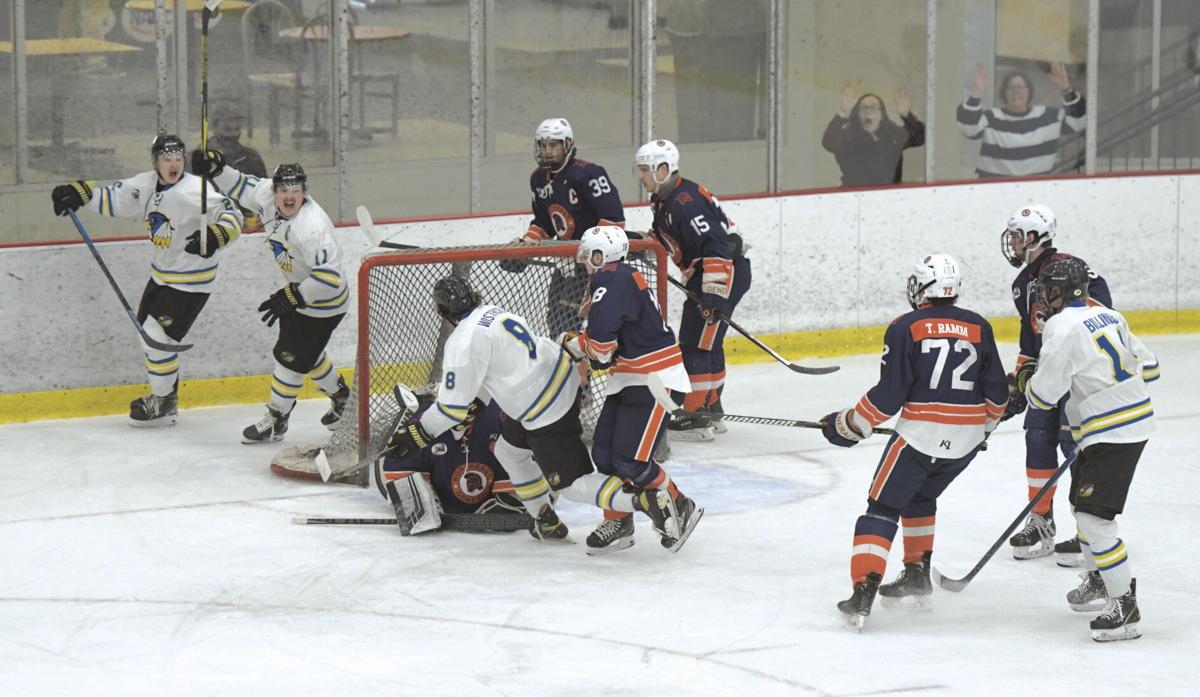 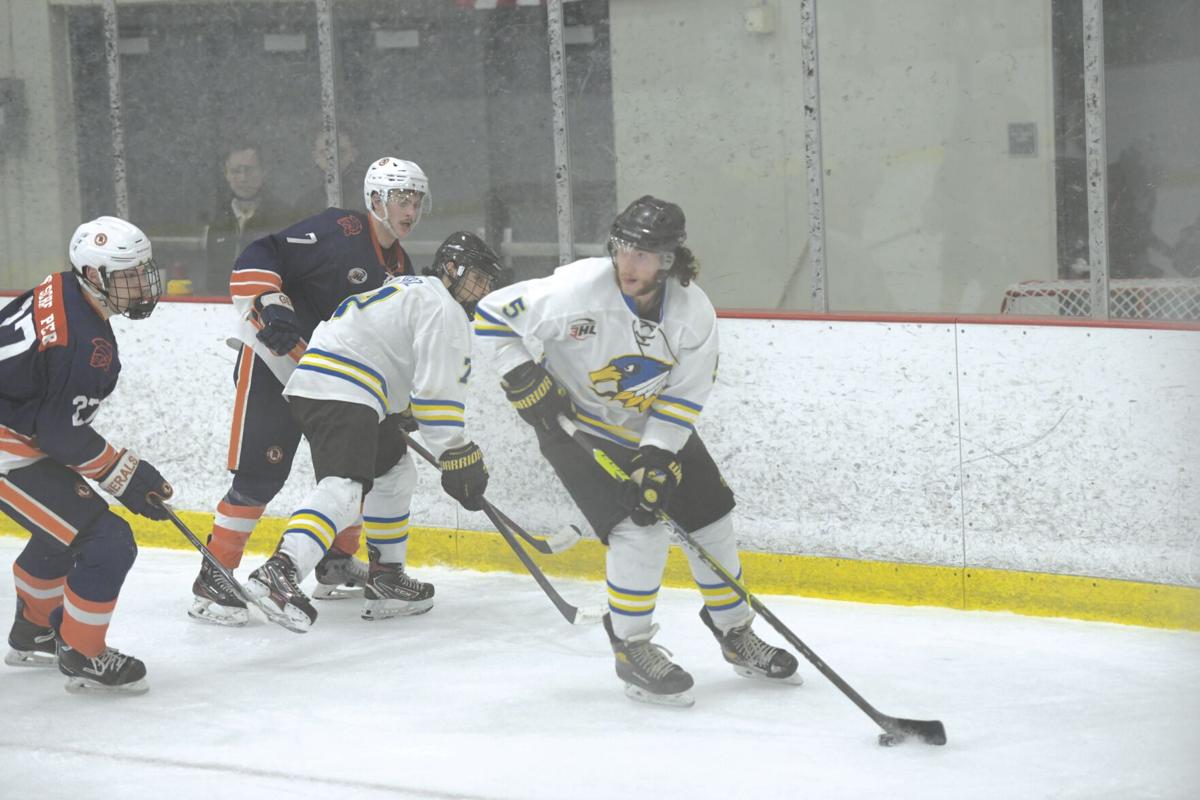 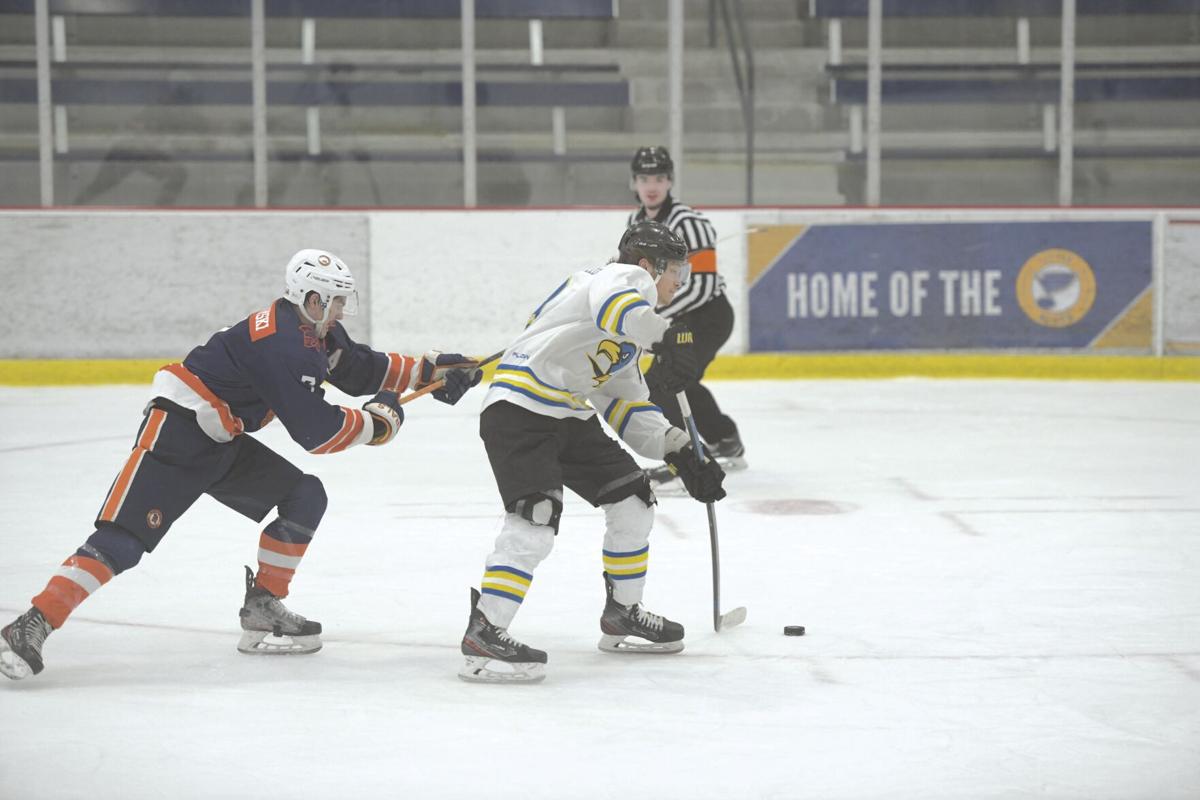 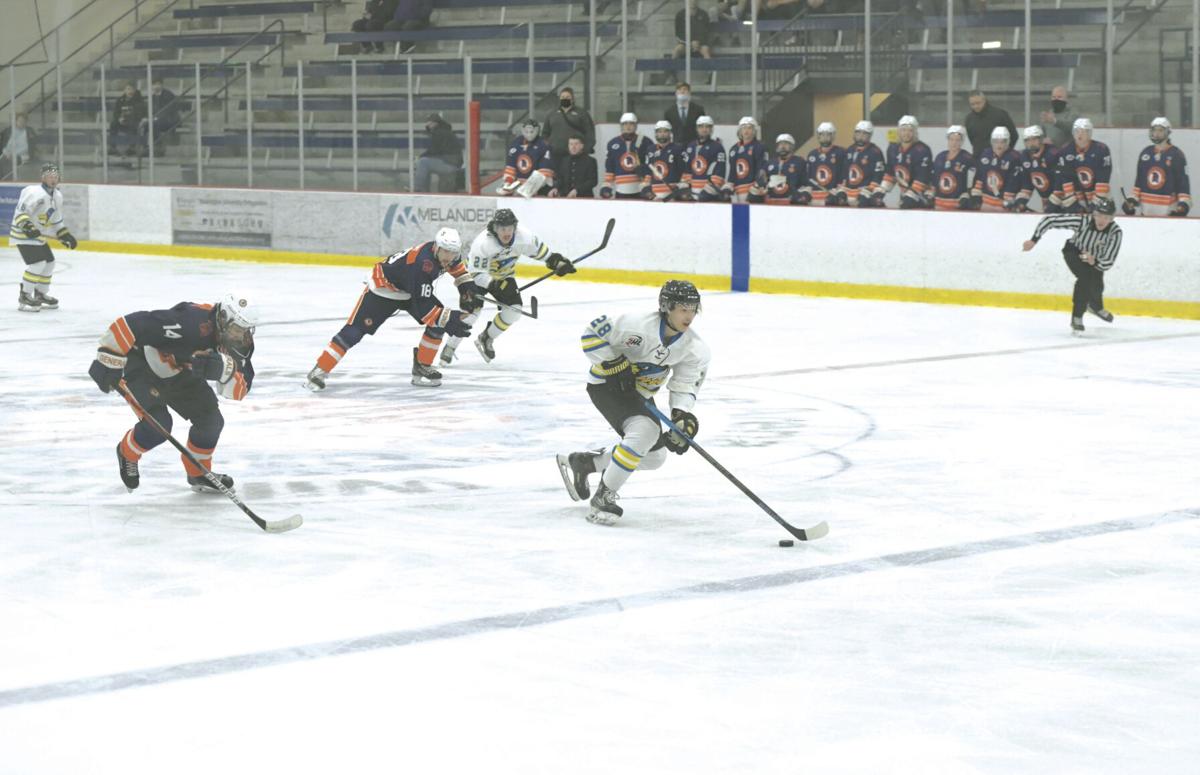 NA3HL Sheridan Hawks forward Derek Humphreys skates past the Northeast Generals defense at the St. Peters Rec-Plex in St. Louis, Missouri Thursday, April 15, 2021. The Hawks' speed showed in their ability to answer a Generals momentum swing with a goal as Sheridan went on to win 13-2. 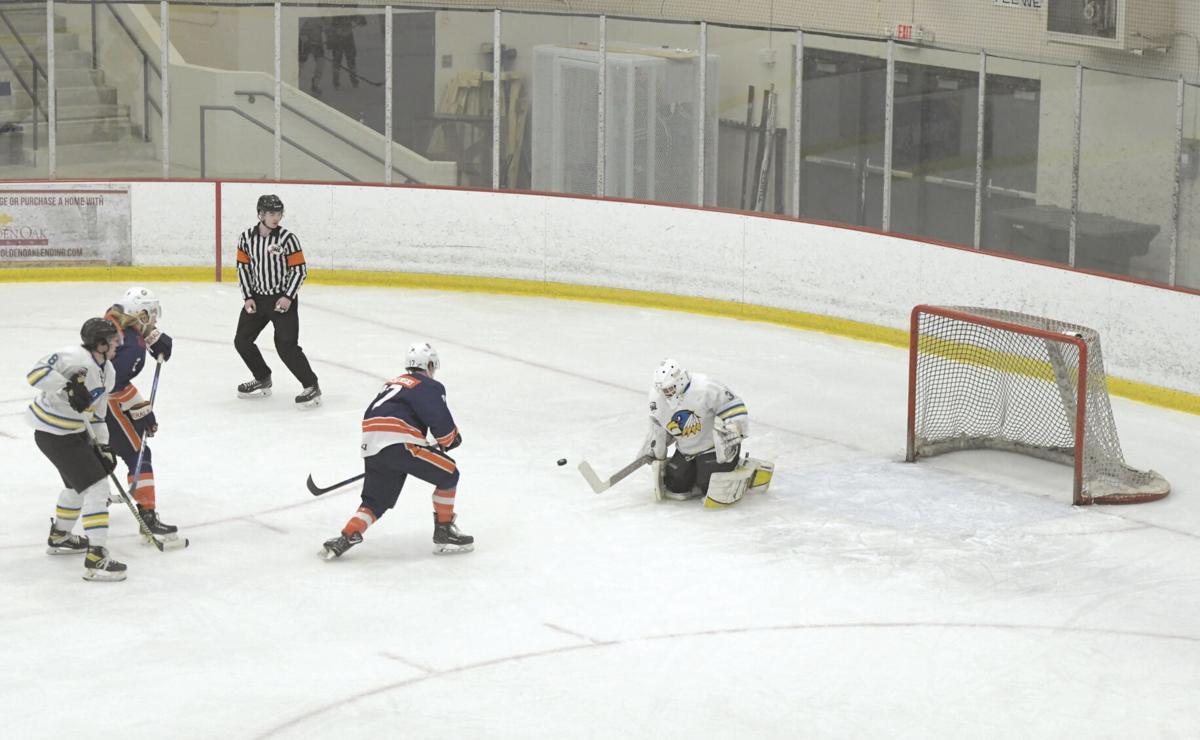 NA3HL Sheridan Hawks defenseman Dakota Kott prepares to hug goaltender Cristian Wong-Ramos at the St. Peters Rec-Plex in St. Peters, Missouri, Thursday April 15, 2021. The Hawks beat the Northeast Generals 13-2 in the Fraser Cup national tournament while setting a record for most goals scored by one team in a single national tournament game.

NA3HL Sheridan Hawks forward Derek Humphreys skates past the Northeast Generals defense at the St. Peters Rec-Plex in St. Louis, Missouri Thursday, April 15, 2021. The Hawks' speed showed in their ability to answer a Generals momentum swing with a goal as Sheridan went on to win 13-2.

ST. LOUIS — Only 1 minute, 6 seconds had passed when the puck ricocheted off Sheridan Hawks forward Jack Harris’ leg into the left side of the net past goaltender Cristian Wong-Ramos. The North American 3 Hockey League Northeast Generals took an early 1-0 lead off an odd bounce in the first game of the Fraser Cup national tournament Thursday afternoon at the St. Peters Rec-Plex just outside of St. Louis, Missouri.

For just more than a minute, it didn’t look like the Hawks would go on to score 13 goals, set an NA3HL record for the most goals scored in a Fraser Cup game nor set a record for the margin of victory in a national tournament game by beating the Generals 13-2.

“It’s surreal,” head coach Andy Scheib said. “We came in here and didn’t know what to expect. … To go out there and give one goal up early, then respond the way that we did. It says a lot about what we’ve been doing all year long.”

The last time the Hawks scored 13 goals or more, they beat the Butte Cobras 13-3 Nov. 7, 2020. The last time a team scored 11 goals or more in a national tournament game was when the North Iowa Bulls beat Peoria 11-0 in March 2013. And that was, similarly, the most recent time a team won by a margin of 11 goals.

Thursday’s 13-2 win over the No. 4-seeded Generals gave the No. 1-seeded Sheridan Hawks their first national championship tournament win as an organization and an early 1-0 record in their three-team round-robin pool. Teams that win both games in their pool guarantee themselves a spot in the semifinals, while teams that go 1-1 rely on the pool’s performance to decide their semifinal berth.

“You have to realize that’s one game,” forward Nick Wieben said. “We’re here to win the whole thing. We can’t just win one. It’s a great feeling but, at the end of the day, we’ve still got to prepare for the next game.”

With goal-scorers and strong goaltending on both teams, Thursday’s matchup could have evolved into a goalies’ dual or high-scoring shootout — Sheridan scored 289 goals in 40 games to lead the league after the regular season and Northeast scored 245 to finish second. The Hawks lived up to their statistical hype, while the Generals did not.

Though ultimately outshot 46-41, Wong-Ramos, Sheridan’s speed and its early resiliency proved to be the difference against Northeast. Six Hawks finished with double-digit point totals and seven others notched a point.

Forward Tony Brings found the back of the net first for Sheridan, skating into the zone with defenseman Simon Herz a minute after the Hawks surrendered their fluke goal to the Generals in the first period. Brings’ backhander from the slot beat Northeast goaltender Patrick Colburn to tie the game at 2:30.

Not two minutes later, defenseman Brice French accepted a pass from forward Zach Brydges and looped around the Generals’ goal in an attempt to bury a wraparound chance. When French’s first shot didn’t go through, he backhanded his rebound past Colburn to give Sheridan the lead at 4:03.

After successfully killing off their first power play of the afternoon, the Hawks’ eventual game-winning goal came from defenseman Mason Wistrcill from the left of the slot from forwards Jacob Cummings and Nick Wieben. Eight minutes and 27 seconds had ticked by in the first when Wistrcill put Sheridan ahead 3-1.

Wieben put on a show with seven and a half minutes left in the first, dancing past several Northeast defenders up the right side before taking a shot and having Colburn direct the rebound to a waiting forward Justin Schwartzmiller on the left. Schwartzmiller fired into the open net to cap the scoring in the four-goal first period.

“We didn’t really care what [Northeast] was doing,” French said. “If they had momentum, we didn’t really care. We played our game. Stuck to our game to go and get the momentum back. That’s what we did, and we ended up coming out on top after that.”

Six goals followed in the second period, each scored by a different Hawk, with two scored on the power play in the later stages of the frame. The one time Sheridan found itself on the penalty kill, Wong-Ramos made timely saves to maintain the multi-goal lead.

The third period played out similarly to the second, though the scoring slowed to a three-goal performance, and Wong-Ramos stopped 26 of the 27 shots he faced.

Schwartzmiller’s goal at 6:36 of the third put the Hawks ahead 12-1, setting the NA3HL record for most goals scored by one team in a Fraser Cup game. In the final two minutes of the game, Cummings’ answer to Northeast’s second goal of the game, which squeaked under Wong-Ramos’ skate, gave Sheridan its 13-2 final score and tied the league record for margin of victory.

“It was a bit surprising,” Brydges said. “I think we were caught off guard. We didn’t expect to score that many.”

Wieben led the team with five points (1 goal, 4 assists), while Cummings scored two goals and had two assists for four points. The players pointed to their even-keeled attitude after surrendering the first goal and playing each period like it was 0-0 as key to their success.

Sheridan plays the No. 6-seeded North Iowa Bulls at 3 p.m. MDT Friday. The Hawks met the Bulls in December as part of the Bulls Holiday Classic tournament and dropped both games, though both teams have undergone roster changes in the second half of the season.

“We’ve got a group of guys determined to prove everyone wrong,” Scheib said. “To play here, get the record and win 13-2 right off the get-go is big for us.”