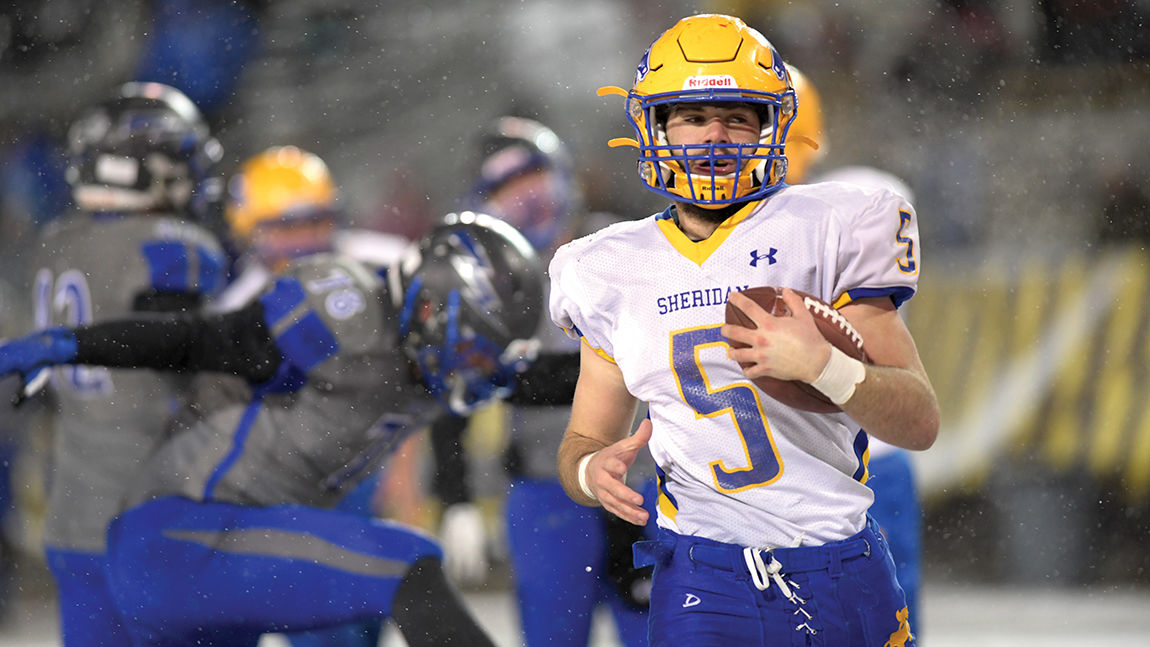 Sheridan’s Garrett Coon (5) runs it in for a touchdown against Thunder Basin Saturday Nov. 16, 2019 at War Memorial Stadium. 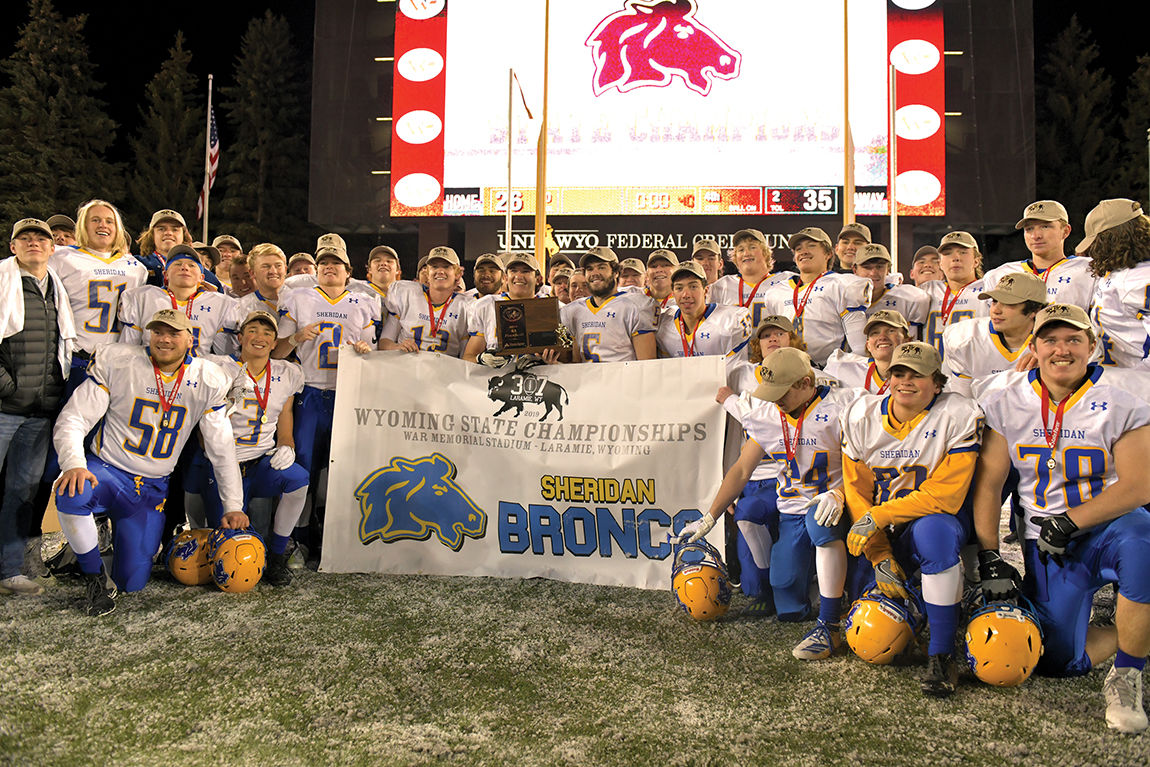 The Sheridan High School state championship football team stands with its banner and plaque after a 35-26 win over Thunder Basin High School Saturday Nov. 16, 2019, at War Memorial Stadium in Laramie.

Sheridan’s Garrett Coon (5) runs it in for a touchdown against Thunder Basin Saturday Nov. 16, 2019 at War Memorial Stadium.

The Sheridan High School state championship football team stands with its banner and plaque after a 35-26 win over Thunder Basin High School Saturday Nov. 16, 2019, at War Memorial Stadium in Laramie.

Thunder Basin missed an extra point earlier in the game and was two points away from tying the Broncs at 28 with 31 seconds left in the third quarter.

Thunder Basin gave the ball to their star middle linebacker Caleb Driskill, a University of Wyoming commit. Driskill ran the ball toward the pylon and looked like he was going to convert the extra point when the Broncs’ defense made a stand, stonewalling Driskill short of the goal line and pushing him out of bounds.

SHS head coach Jeff Mowry said while it was only two points, it was a big stop for the Broncs, who earned the state title Saturday in Laramie with a win over Thunder Basin, 35-26.

“We tell our kids you have to be ready to play at all times and any time the opportunity arises you have to be ready to make a play,” Mowry said. “A lot of times on 2-point conversion kids get down, they just gave up a touchdown and they are kind of down. Boy, did we answer there with a big hit on the sideline. Two big players going head-to-head with Ryan Sessions and their big guy [Caleb Driskill].”

Sheridan drove the ball 93 yards on the next possession. The drive was capped off by a 1-yard rushing touchdown by senior quarterback Jacob Boint. Michael Greer made the PAT, giving the Broncs a two-possession lead at 35-26.

“They were tired kids but they dug down deep and just went and got it,” Mowry said. “They wanted it; they wanted the state championship and they just had to go out and execute and they did it.”

Thunder Basin tried to answer Sheridan’s fourth-quarter touchdown but was stopped. All that was left to do was run out the clock. Thunder Basin forced a fourth down and was hoping for one more shot to win the game. The Broncs instead ran a fake punt with Coon rushing to the left side of the formation instead of punting the ball away as he did three times earlier in the game.

“It was a gutsy one because if it goes bad then you look pretty bad but it worked out for us,” Mowry said.

Mowry said the coach knew the play was open. Coon is also a great player to have the ball in his hands during a situation like that.

“That was all [the coaches] scheme and the guys up front did a really good job blocking it and it was open space,” Coon said. “I looked at the left side and was a little nervous, I was like, ‘Oh no, is this going to work?’ You have to trust the coaching staff, they draw up great plays and it was wide open so hats off to them.”

While Coon was nervous about the play call, senior Ethan Johnson was waiting for the fake to be called ever since he was placed on the punt team.

“I was so excited. In my head was like, ‘Heck yes!’ We wanted to run one all year and only ran one before this,” Johnson said.

Sheridan started the title game off about as well as they wanted. The Broncs forced a turnover on two of Thunder Basin’s first three drives, with both leading to touchdowns. Zach Koltiska and Carter Dubberly had the interceptions for the Broncs.

Sheridan’s Toby Jacobs also forced a fumble in the second quarter and it was recovered by Reese Osborn.

Sheridan had a 21-7 lead at halftime.

On the first play from scrimmage in the second half, Koltiska punched the ball out and Sessions recovered the ball. Sheridan used a short field to score, giving them a 28-7 lead.

“I do not know if we would have scored as much as we did if we did not get those turnovers,” Johnson said. “I think it would be a different game if we did not punch those balls out.”

Thunder Basin scored on three of their next four drives to cut into Sheridan’s lead and attempt the comeback like they did multiple times during the season.

Sheridan knew they were facing one of the best offenses in 4A being led by All-State quarterback in Hamilton.

“They definitely started making some plays; they are a great team,” Boint said.

When the clock finally ran out, it was Sheridan celebrating on the field and the Broncs logo filled the big screen at War Memorial Stadium in Laramie. Sheridan did not have the same feeling last year when they lost in the title game.

“It means a lot,” Boint said. “When you say this is your goal at the beginning of the year, you have to go out and work for it each and every day and that is something we have done.”

Sheridan ends the year with an 11-1 record and a state championship title.