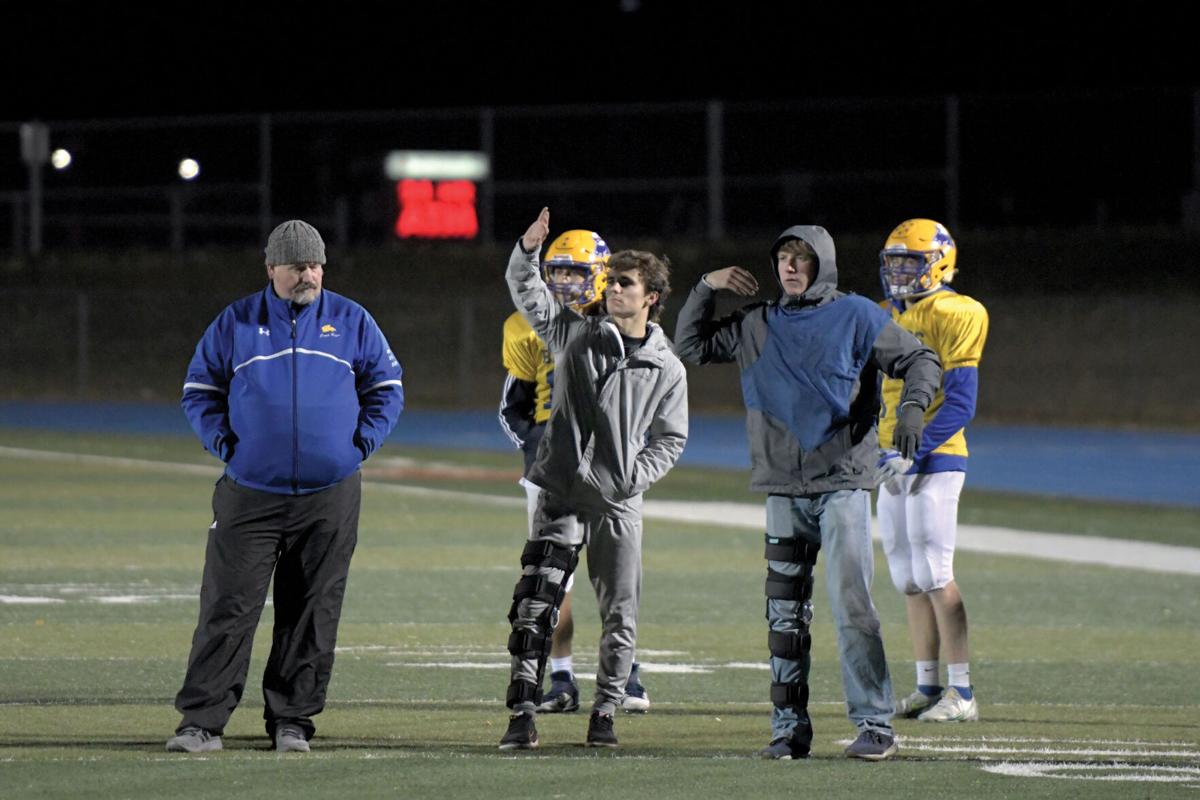 Sheridan's Cael Gilbertson, left with leg brace, and Brock Steel signal a play to the Broncs' offense during practice Thursday, Nov. 11, 2021, at Sheridan High School. Neither had much signaling experience before this fall. 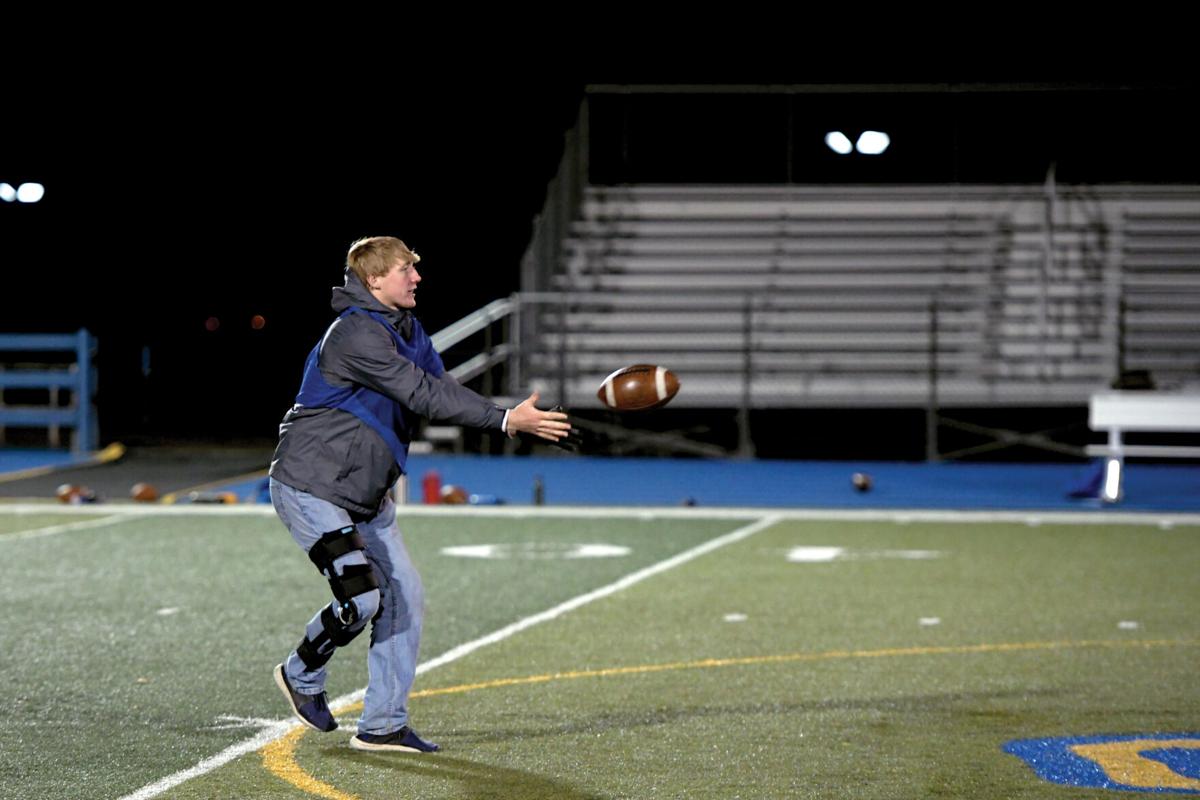 Sheridan's Brock Steel looks in a catch during practice Thursday, Nov. 11, 2021, at Sheridan High School. Steel, a senior, started for the Broncs as a sophomore and junior before missing all of this season due to injury. 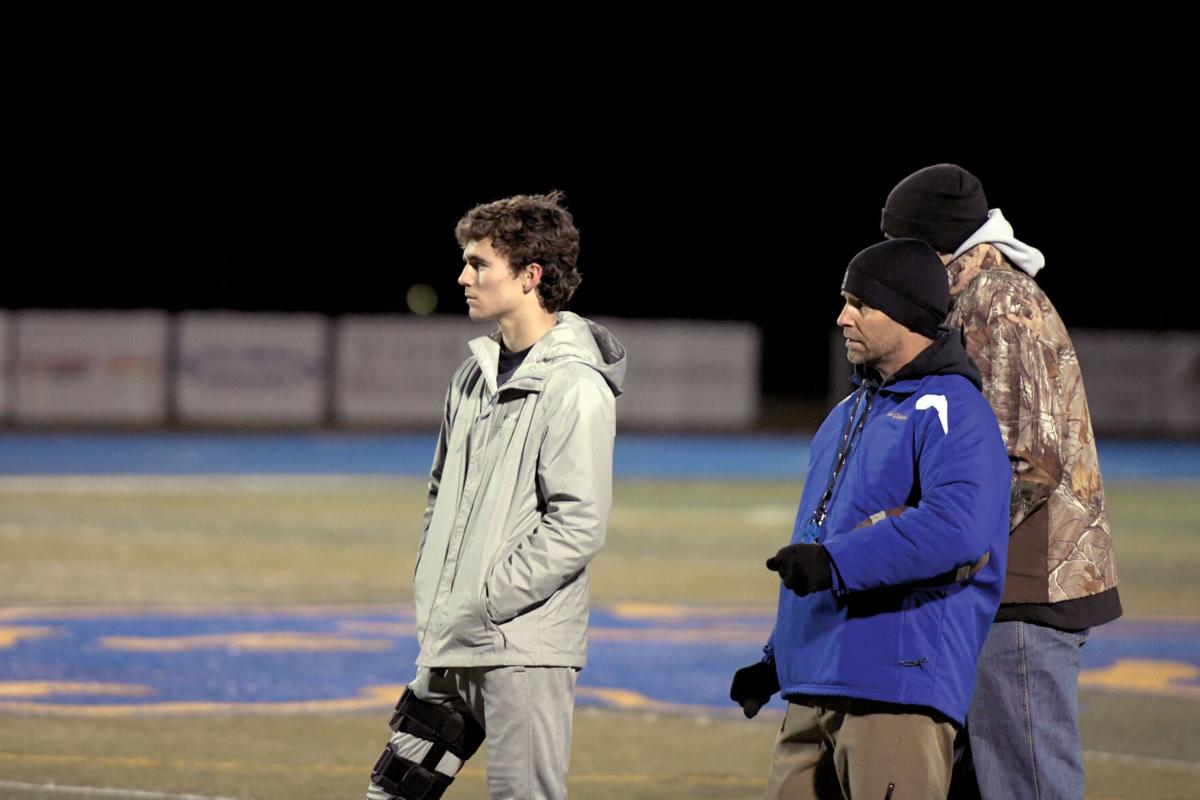 Sheridan's Cael Gilbertson, left, watches practice from the sidelines next to his dad, Darin, who coaches Bronc wide receivers, Thursday, Nov. 11, 2021, at Sheridan High School. Gilbertson was lined up to play quarterback and defensive back for the Broncs this season before injuring his leg last summer.

Sheridan's Cael Gilbertson, left with leg brace, and Brock Steel signal a play to the Broncs' offense during practice Thursday, Nov. 11, 2021, at Sheridan High School. Neither had much signaling experience before this fall.

Sheridan's Brock Steel looks in a catch during practice Thursday, Nov. 11, 2021, at Sheridan High School. Steel, a senior, started for the Broncs as a sophomore and junior before missing all of this season due to injury.

Sheridan's Cael Gilbertson, left, watches practice from the sidelines next to his dad, Darin, who coaches Bronc wide receivers, Thursday, Nov. 11, 2021, at Sheridan High School. Gilbertson was lined up to play quarterback and defensive back for the Broncs this season before injuring his leg last summer.

“If I would’ve done things differently, would I be here right now? What would’ve happened if I could have played?”

Those thoughts hit him after watching his teammates run onto their home field for the final time this season while he had to walk. Because he had to walk. Of course, as a senior, he wanted to run with his boys but couldn’t.

But those thoughts dissipated at kickoff, like they have every game for the last 11 weeks. He had a job to do.

Steel is hurt. After ripping up his right knee last summer, he has missed this entire season, trading his football pads and playing time for a black leg brace and the sidelines. He shares the experience with junior Cael Gilbertson who finds himself in the same situation.

“I didn’t hear a pop or anything, but I knew instantly something was wrong,” Gilbertson said.

He sat out the rest of camp and underwent an MRI when he arrived back in Sheridan. The results weren’t good. He tore his ACL, MCL and medial and lateral menisci.

His season was over before it started.

“(Gilbertson) was looking to have a significant role on the varsity squad when he got hurt,” Mowry said.

A month later, Steel was attending a football recruiting camp at Montana State University. As a defensive back, he matched up with a tight end during a one-on-one drill, and the tight end ran a 5-yard in route. Steel stepped in front of the tight end to defend a pass, and the tight end crashed into his knee at the end of the play.

“I was more scared than anything,” Steel said. “It was obviously painful, but I was just scared, and my mind was thinking of this season and what my future would hold.”

His future, like Gilbertson already endured, included an MRI and not-so-good results — a torn ACL and two torn menisci.

His season was toast, too.

“Brock was a two-year starter for us as a sophomore and a junior and was looking to have a great senior year on the field,” Mowry said. “... He had a big impact on our two previous seasons.”

Despite each being ruled out, Steel and Gilbertson still wanted to contribute to their team in any way they could. So in August, Mowry approached them with an idea.

He asked if they wanted to be the ones to signal in plays from the sidelines to the team. Both said yes.

So every practice and game since, Steel and Gilbertson have donned colored pinnies and flapped their arms and touched their noses and pointed all over the place. It looks like a game of charades, but really, it’s the message from the coaches to the Broncs on the field. Neither Steel nor Gilbertson had any experience with signaling before this year. It’s almost like being a coach.

“It gives us a chance to have a good role where the rest of the team knows we’re contributing and putting our time in to help,” Gilbertson said.

At first, they both leaned on crutches, which made the theatrics of signaling a little tougher. But as they became more mobile, the jobs became easier. Though they mostly stay focused on the field, they have felt a little pressure at times.

“If you mess up, then everyone else will mess up,” Gilbertson said.

Because they fixate on the action of every play, Steel and Gilbertson sometimes notice mistakes Sheridan is making or opponent weaknesses it can exploit. They relay those to the coaches and players when they happen. Gilbertson said Steel also has become an expert at pep talks and speeches, though Steel denies it.

“I feel like, as a senior, you kind of take on that role,” Steel said. “So I’ve kind of had to force myself in aspects to go talk to the team and get them motivated or get them focused in a different direction if I realize things are going the wrong way.”

Mowry said Steel and Gilbertson adjusted to their new roles nicely. When they were younger kids, they served as Sheridan’s ball boys on three consecutive state championship-winning teams from 2015 to 2017, so the sidelines at Homer Scott Field weren’t foreign to them.

But every Friday, they ask the same question.

The answer is always no, but that doesn’t stop the inquiries. They asked Thursday, and Steel said he would probably pose the question again before the state title game against Rock Springs Saturday afternoon.

“It sucks, to put it lightly,” Steel said of not being able to play.  “Just as a kid, you look forward to your varsity football years, especially your senior year. Standing on the sidelines is not how I imagined it.”

“Every Friday was tough,” Gilbertson said. “Each one gets tougher.”

That’s what Steel felt during the national anthem before the Nov. 5 semifinals game. Not tears. Just the what-if thoughts.

He and Gilbertson expect the same thing to happen Saturday — the toughest day of the season to sit out.

“It’ll be bittersweet,” Gilbertson said. “Walking out — well, Brock and I will kind of be hobbling out. So when we hobble out, I want to take a moment to take it in … Being able to come out of the tunnel, and I’m sure there will be tons of people. To be able to take that all in, to see the lights and the bands playing, just to be able to soak it in will be cool.”

But just like last week, that moment will fade. The whistle will blow, and the game will start.

And Brock Steel and Cael Gilbertson will have a job to do.

Who: No. 1 Sheridan Broncs vs. No. 2 Rock Springs Tigers

Where: War Memorial Stadium in Laramie

How to follow along: The game can be watched on the NFHS Network with a paid subscription. It can be listened to on 1410 KWYO and 106.9 FM or their website. The Sheridan Press will also post live updates on Twitter, @PressSports_WY.