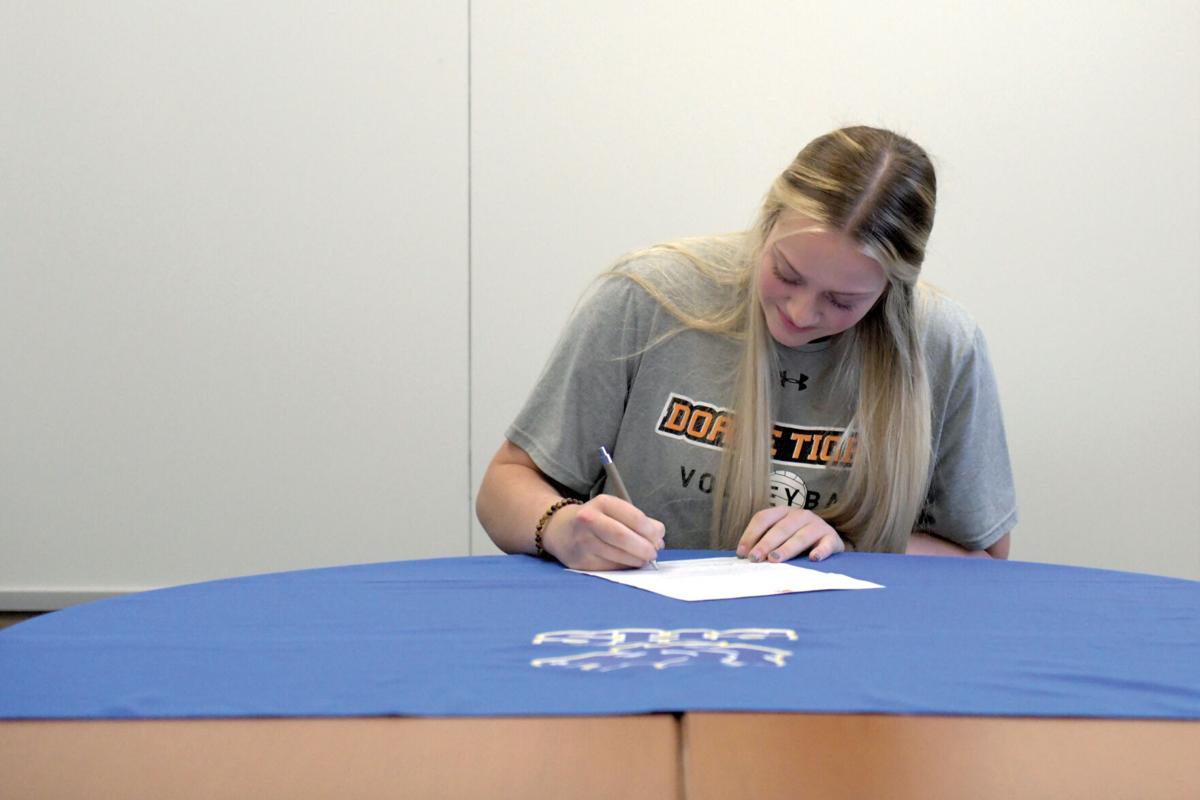 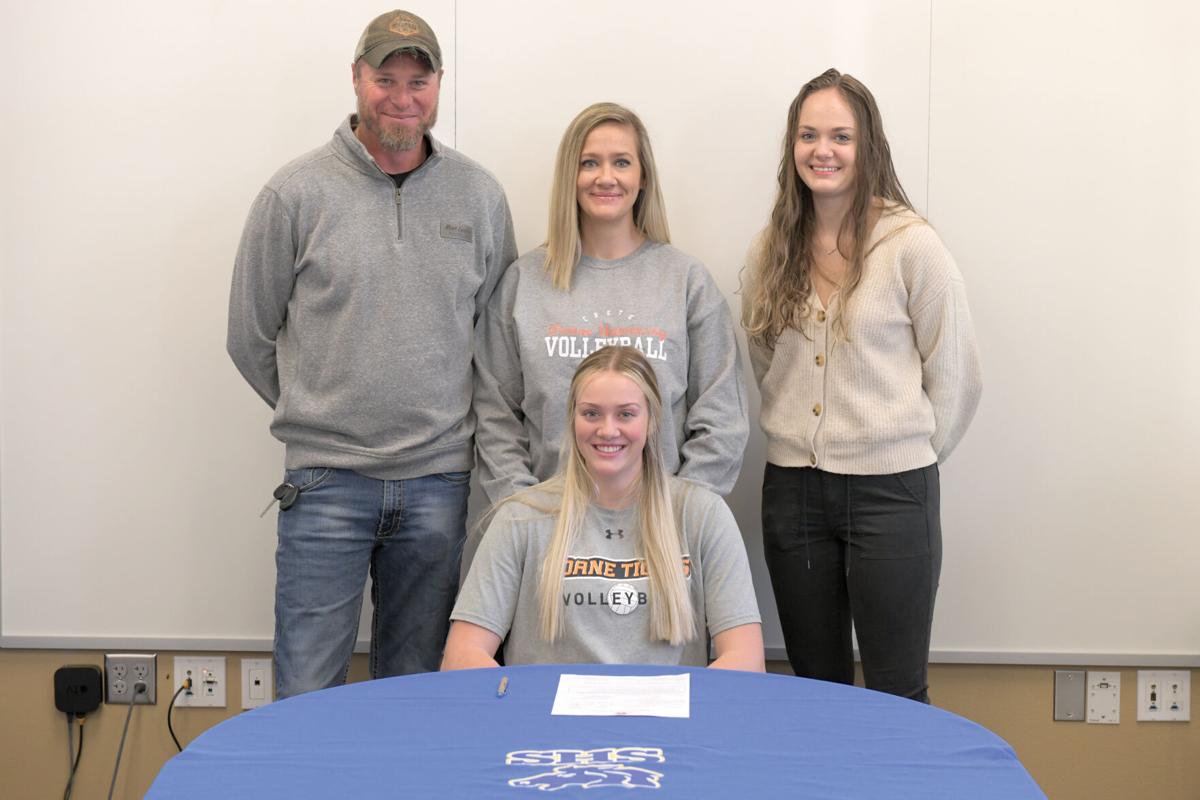 Jenna Sweeny, front, smiles with her parents and sister (from left, Rich, Whitney and Olivia Sweeny) before signing to study and play volleyball at Doane University Wednesday, Nov. 10, 2021, at Sheridan High School. Sweeney has extended family living 25 minutes from Doane and said that played a role in her college decision. 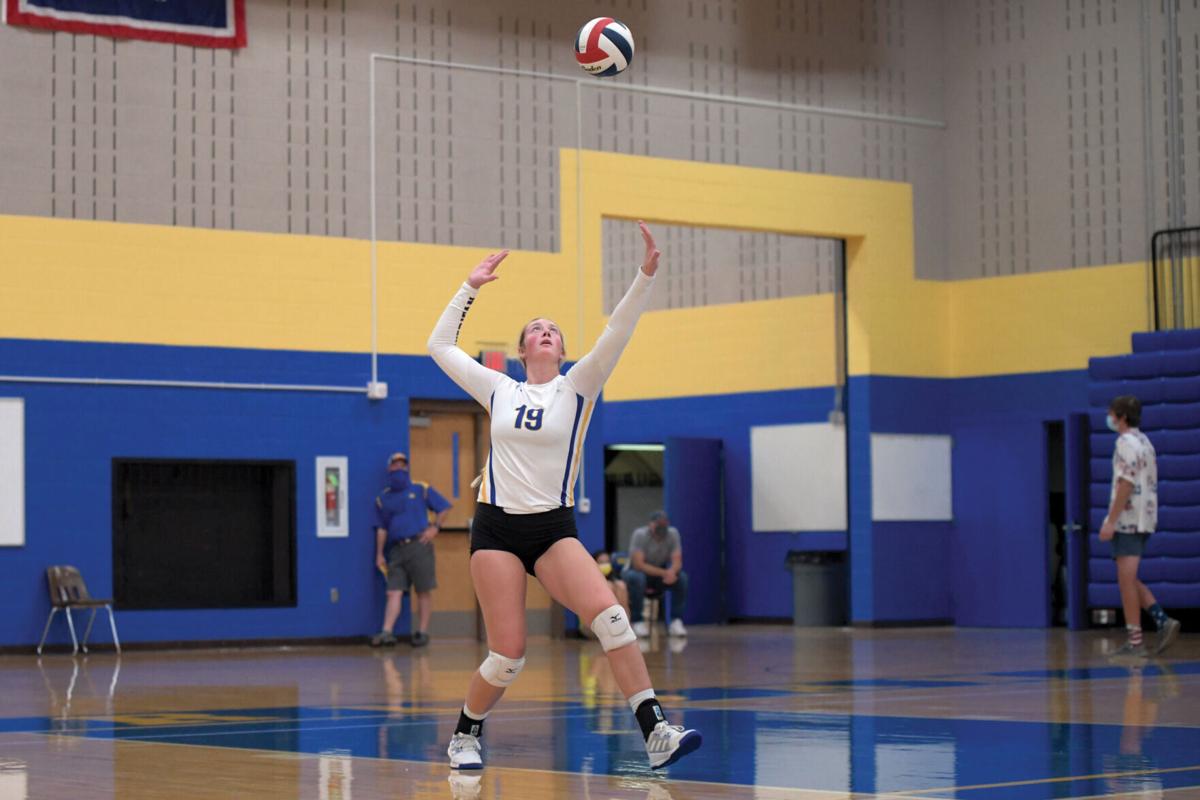 Jenna Sweeny, front, smiles with her parents and sister (from left, Rich, Whitney and Olivia Sweeny) before signing to study and play volleyball at Doane University Wednesday, Nov. 10, 2021, at Sheridan High School. Sweeney has extended family living 25 minutes from Doane and said that played a role in her college decision.

SHERIDAN — Despite being 10 and a half hours from Sheridan for the next four years, Jenna Sweeny will be only 25 minutes from family.

Wednesday, Sweeny officially committed to attend school and play volleyball at Doane University in Crete, Nebraska, after she graduates from Sheridan High School next spring. She plans to major in biochemistry.

“I have family down there, and I’ve gone a few visits over the summer,” Sweeny said. “It was a beautiful campus and a really good fit, academically, for me. And I really liked the coach and the program.”

Sweeny said a few different factors helped solidify her decision, but having an aunt and uncle nearby was toward the top of the list.

“With it being so far (from home), that’s really nice to have them 25 minutes away,” Sweeny said. “I can go over there for dinners and not miss home so much, maybe.”

After starring for the Sheridan Lady Broncs for the past few seasons, Sweeny said she is most excited about the opportunity to play college volleyball. Doane is an National Association of Intercollegiate Athletics (NAIA) program that wrapped up its 2021 season with a winning 19-14 record last week.

“She is so nice,” Sweeny said of Jones. “She’s running a great program. She has great philosophies. I just really like everything she does.”

After coaching Sweeny for the last two years as Sheridan’s head coach, Lori Byrd thinks Sweeny’s versatility will make her a good college player. Sweeny lined up mostly as a middle and outside hitter for the Lady Broncs but can play everywhere.

This fall, she stuffed the stat sheet in multiple areas, finishing with 74 kills, 19 service aces and a team-high 39 total blocks.

“I think Jenna can read the other team very, very well, and that’s why she’s such a good blocker,” Byrd said. “At the college level, she’ll probably play right-hand hitter. She’s got good hands to be a setter there, too. She has a nice serve on her, and she can play back row, especially if she works at it … She’ll do great things there. She’s so smart. She’s a very intelligent young woman, so she’ll do a great job in school. She’s on her way!”