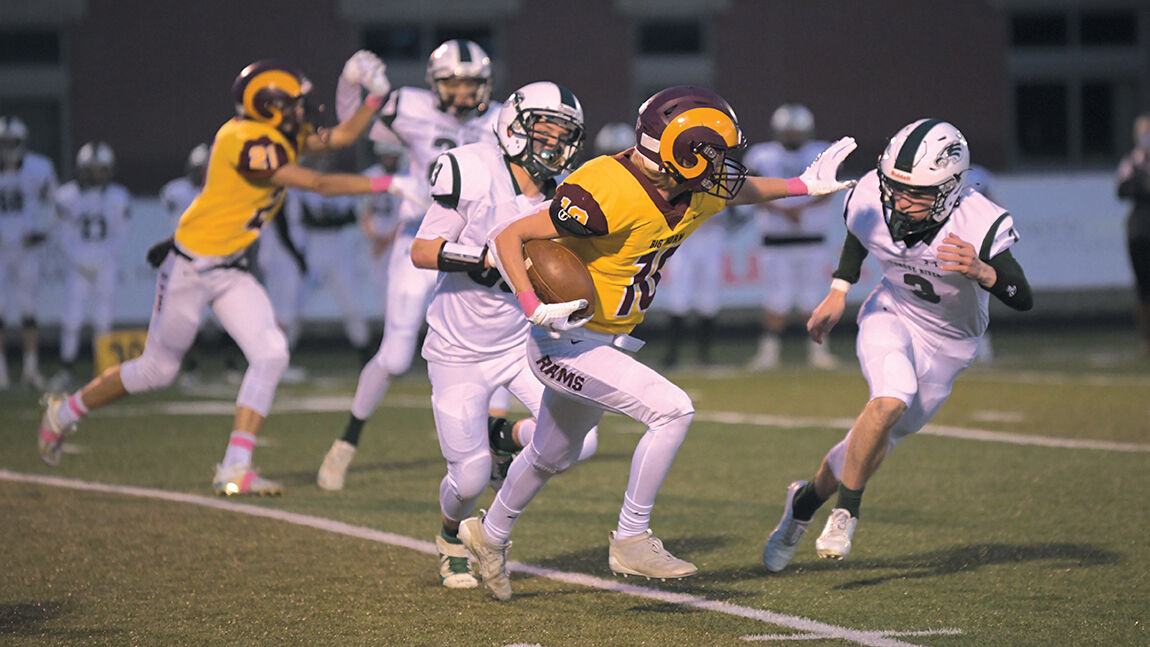 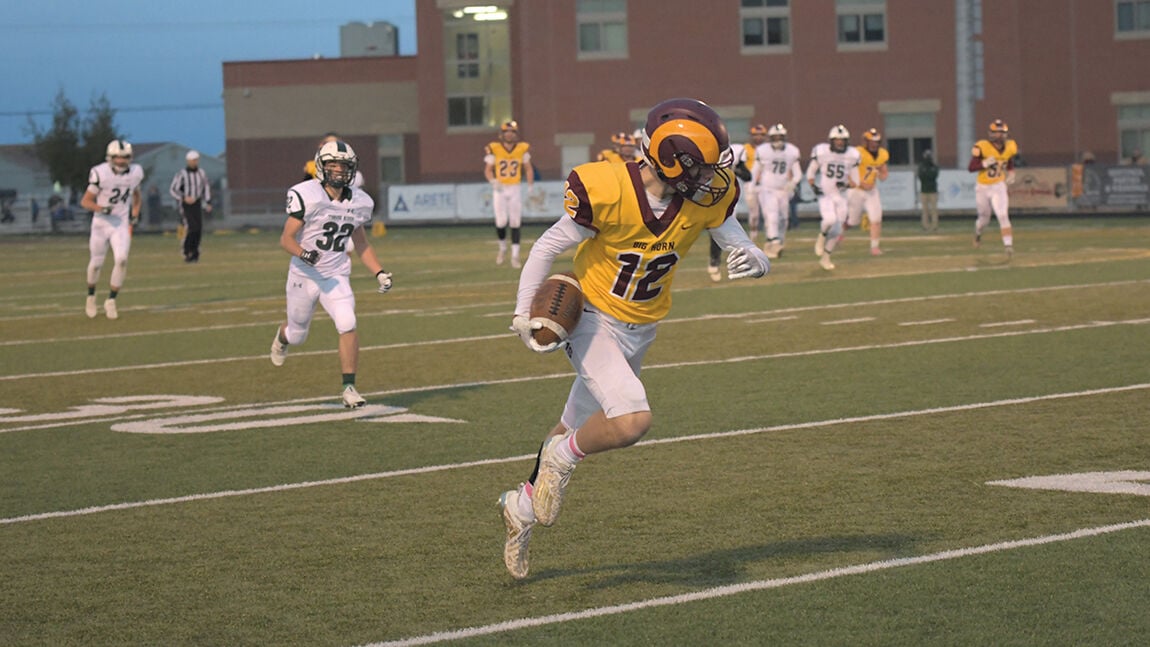 Emily Simanskis | The Sheridan Press Big Horn senior wide receiver Sterling Madry sprints to the end zone during the first quarter of the Rams game vs. Tongue River Friday, Oct. 16, 2020. Madry’s score put the Rams on the board, and they would later beat the Eagles 49-7. 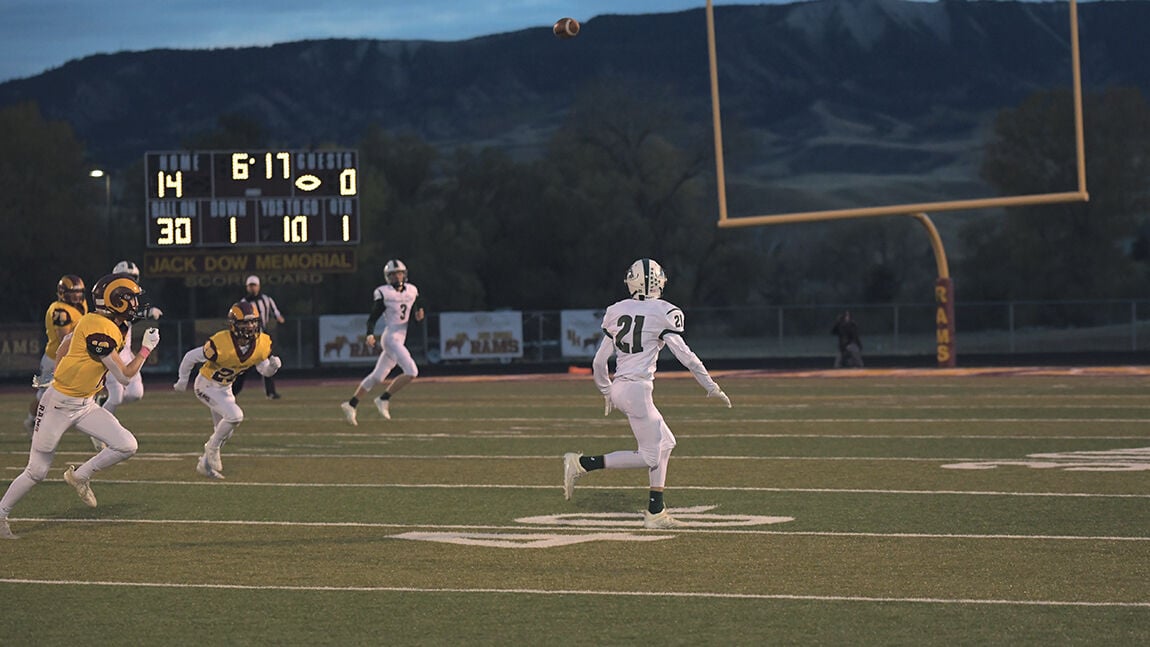 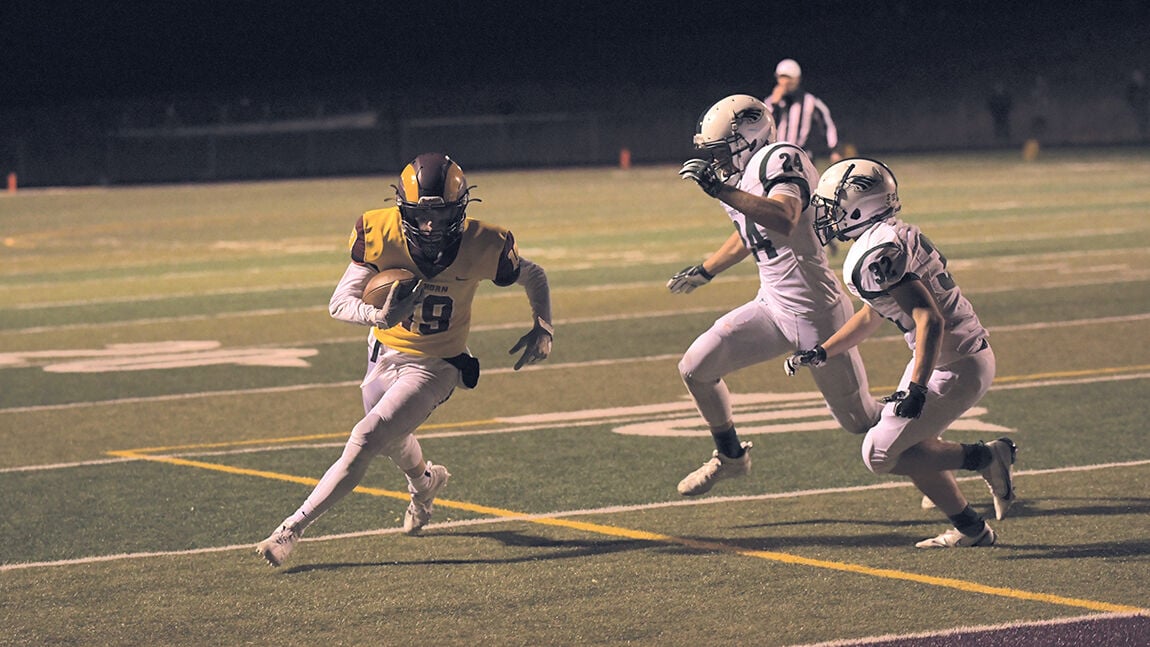 Emily Simanskis | The Sheridan Press Tongue River senior Greg Bold falls into the end zone while Big Horn junior defensive back Cade Butler (21) and senior defensive back Christian Walker makes the tackle during the second quarter of Tongue River’s game vs. Big Horn Friday, Oct. 16, 2020. Bold’s score made it 14-7 Big Horn, and the Eagles would lose 49-7.

Emily Simanskis | The Sheridan Press Tongue River senior Greg Bold falls into the end zone while Big Horn junior defensive back Cade Butler (21) and senior defensive back Christian Walker makes the tackle during the second quarter of Tongue River’s game vs. Big Horn Friday, Oct. 16, 2020. Bold’s score made it 14-7 Big Horn, and the Eagles would lose 49-7.

BIG HORN — In the classic cross-county rivalry between Big Horn High School and Tongue River High School, the Rams and Eagles student sections warred with opposing chants, coaches shouted instructions a little louder and the football players battled on the field to claim the Thunder Bowl.

But Big Horn capitalized on their home field advantage and the momentum accompanying their four-game winning streak to essentially win the game in the first half of the first quarter — the Rams rattled off two quick touchdowns within the first 5:33 to lead 14-0 en route to their 49-7 win over the Eagles.

“We knew watching them on film and knowing the character they have, they were going to come to play,” Rams head coach Kirk McLaughlin said. “They’ve done it all year long. We knew we had to match their fire for the game with our own and come out ready to play, because we knew they were.”

The Rams’ win extends their win streak to five games and brings their record to 5-2, while the Eagles fall to 1-7 and have lost three in a row.

“My boys are tough,” Eagles head coach Steve Hanson said. “... It’s a testament to them for how hard they play. They don’t play that way for me, they play that hard for each other.”

Big Horn kicked off to Tongue River to start the game, and the Eagles played to a fourth-down-and-2 on their own 26-yard line but jumped offside to punt on their first possession.

For the Rams’ first possession, sophomore quarterback Cooper Garber handed off to junior wide receiver Jax Zimmer, senior running back Carson Bates, then Bates again to get a first down.

On the 50-yard line for first-and-10, Garber found senior wide receiver Sterling Madry wide open on the far right side. Madry powered to the end zone unchallenged for the first score of the game and a 7-0 lead.

After the ensuing kickoff, Tongue River lined up on the 16-yard line for first-and-10 but a handoff from junior quarterback Eli Cummins to senior running back Greg Bold fell to the ground and Bates fell on the ball to give the Rams possession again on the 13-yard line.

Two plays later, on second-and-5 on the 7-yard line, senior running back Luke Mullinax snagged a pass from Garber on the left side and ran for another quick score. The extra point attempt sailed through the uprights and doubled the Rams’ lead to 14-0 with 6:27 left in the first quarter.

“It was crazy important [to get an early lead],” Mullinax said. “Tongue River comes out strong. They always do.”

The first quarter ended with the 14-0 score, but the Eagles and their student section knew it was early and only a two-score deficit in a rivalry game — giving Tongue River a little extra juice.

“No matter our record, no matter their record, that’s going to be irrelevant,” Eagles head coach Steve Hanson said prior to the start of the season. “That is going to be the game.”

With over six minutes left to play in the second quarter, Cummins handed off to Bold, junior fullback Cashe van Tassel and senior fullback Tony Perfetti to put together two first downs and bring the Eagles to the 29-yard line.

Hanson reminded his team “you’re rolling” from the sideline, while McLaughlin shouted, “defensive backs, talk” from across the field.

McLaughlin’s warning didn’t do the Rams any good, as Cummins found Bold through the air then scrambled for another first down.

Bold — who ranked seventh overall in rushing in the 2A through six weeks, averaging 6.8 yards per carry — found room on the next play to run in a  touchdown with 4:11 left to play in the first half and cut into Big Horn’s lead.

“[Big Horn] brought some pressure in the first quarter, but once we started to block it up, we started seeing those bright spots,” Hanson said.

As the clock ticked toward halftime, the Eagles got the ball back with a minute-and-a-half left, were forced to punt and put the ball in the hands of the Rams with a minute left.

Big Horn marched down the field, and Garber showed why he’s ranked fifth in the 2A in passing, averaging 115.8 yards per game and 12.4 yards per completion prior to Friday’s contest.

With McLaughlin’s expert clock management, calling for the Rams to run the hurry up and spike the ball to give Big Horn time to add an insurance tally, Garber found sophomore wide receiver Dylan Greenough-Groom in the right corner of the end zone for the score with 16.9 seconds left  in the first half.

“They had all the momentum, and we needed to do something,” McLaughlin said. “We needed a great drive to end the half because we knew we were getting the ball back. That was just an awesome little two-minute drill we put together.”

Tongue River nearly replicated the last-second drive, but the score read 21-7 Big Horn as the teams jogged to their respective locker rooms.

“We really didn’t make them earn it in the first half,” Hanson said. “And then in the second half, I didn’t do a good enough job catching up. They exploited and found the weak point, and it took us until the fourth quarter to adjust to it.”

Through 24 minutes of play, the Rams recorded 218 yards with 169 of those coming through the air as Garber completed 10 of his 15 passes.

The Eagles recorded 115 yards in the first half, but most of their offense came from their rush game which picked up 86 yards on the ground.

Big Horn added to their total with 8:25 left in the third quarter with a Bates rushing touchdown to push the score to 28-7, and with 10:05 left to play in the fourth quarter and the game, Mullinax ran in a 31-yard touchdown to add a dagger of a touchdown and grow Big Horn’s lead to 35-7.

With 7:11 left to play, senior tight end James Richards scampered six yards for another touchdown and just over two minutes later, the Rams capitalized on a turnover and Richards ran into the end zone again at 4:57 to bring about the final 49-7 score.

The Rams ended with 393 total yards, while holding the Eagles to 222. Tongue River ranked fifth in the 2A prior to Friday's contest averaging 175.8 rushing yards per game and five yards per attempt, but managed 137 Friday.

Garber completed 16 of his 21 passes for 250 yards with Madry recording 101 yards and one touchdown on five receptions. Mullinax finished with 38 yards and two touchdowns on two receptions, while Bates picked up 88 yards on the ground with one touchdown.

Meanwhile, Cummins completed nine of his 16 passes for 85 yards with Bold as his favorite target — the running back recorded 37 yards on four receptions, while van Tassel led the Eagles on the ground with 58 yards on 14 carries.

The Rams won the turnover battle, as they only had one to Tongue River's six.

“Our coaches did a good job installing what I thought would be the best game plan,” Hanson said. “And Big Horn just took advantage of some of the things we were unable to do in the second half.”

The excitement of the Thunder Bowl 2020 victory manifested itself in the Rams’ jubilant cries before and after their post-game huddle.

“It’s good to have bragging rights for a year, I can tell you that,” McLaughlin said. “Those guys — we knew they were going to be tough. … But we’ve given ourselves a chance to win the conference, and that’s a big deal considering the way we started. I’m proud of the way the guys came out and played.”

The two teams end their regular seasons next weekend, as Big Horn travels to Upton/Sundance to kickoff at 6 p.m. and the Eagles welcome Glenrock to town at noon next Friday.