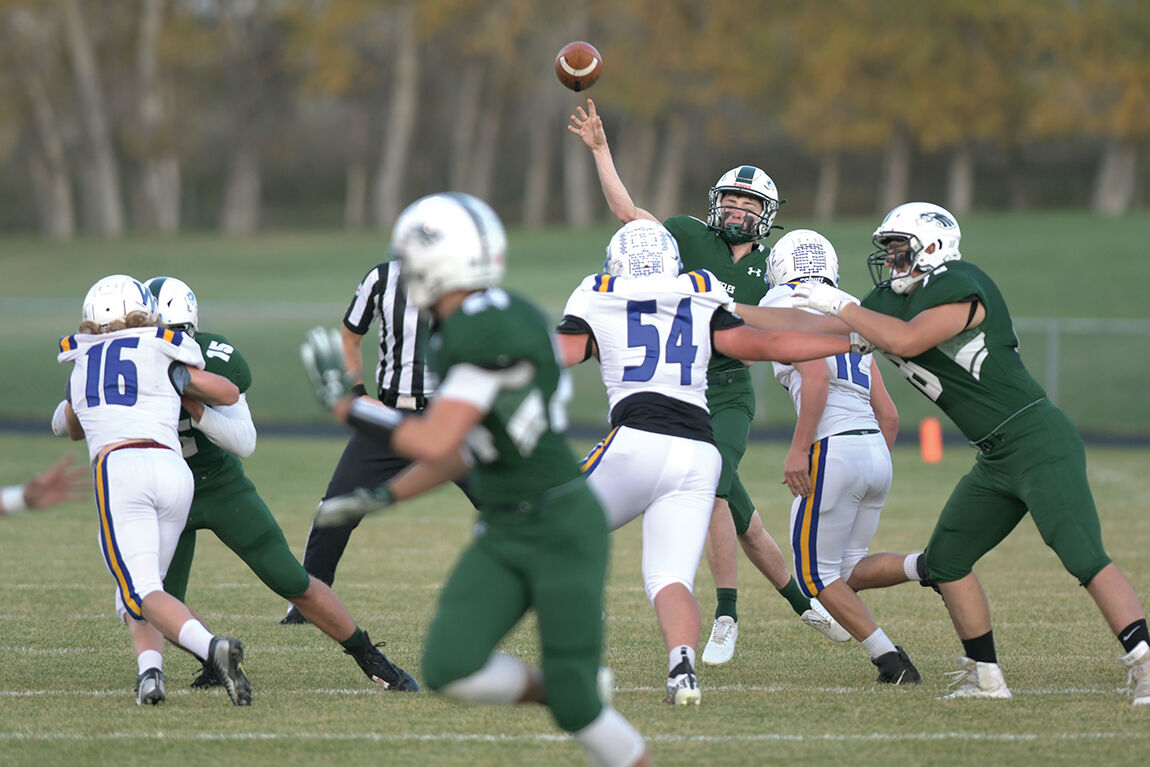 Matthew Gaston | The Sheridan Press Tongue River’s Eli Cummins (3) makes the pass over the middle during play against Wheatland Friday, Oct. 10, 2020. The lost to the Bulldogs 20-38. 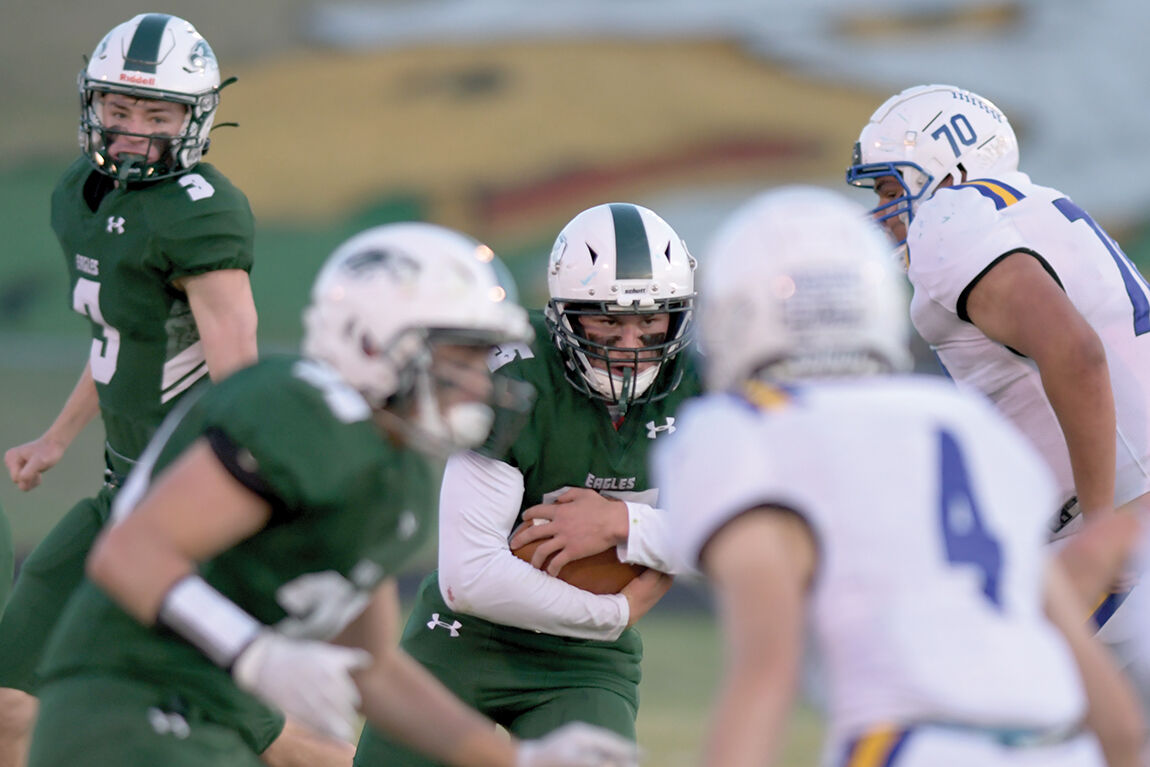 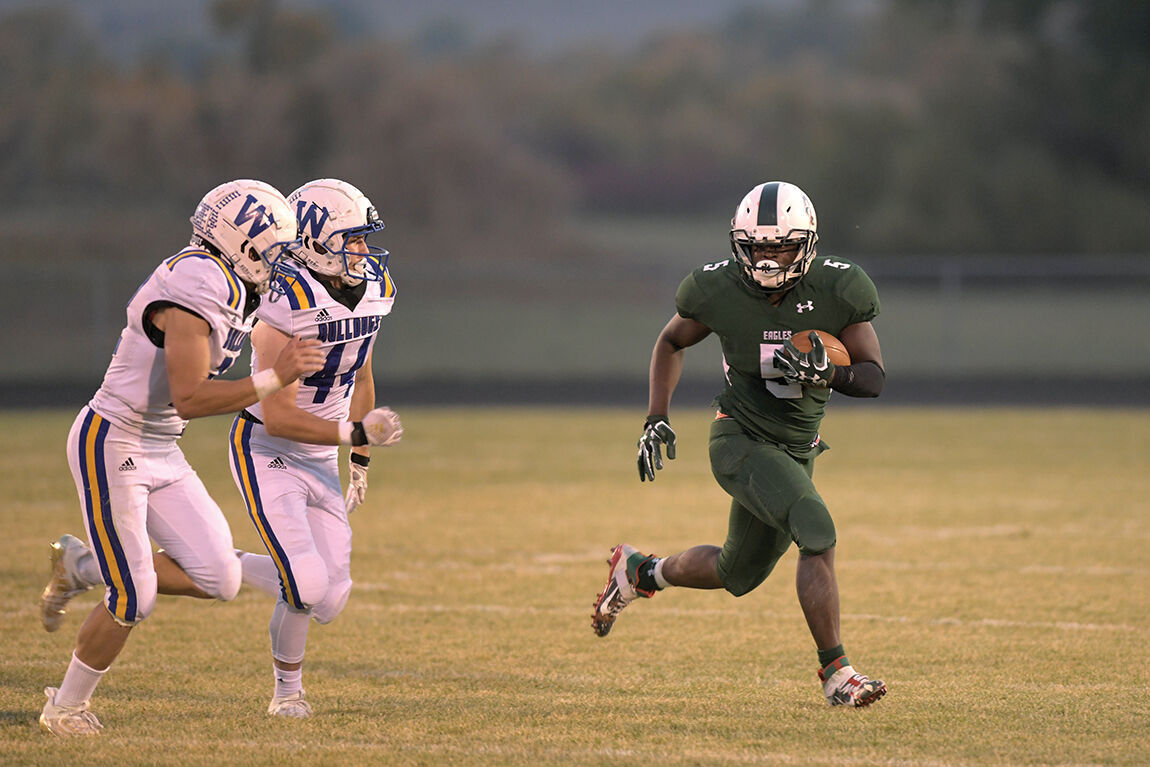 Matthew Gaston | The Sheridan Press Tongue River’s Greg Bold (5) breaks to the side line hoping to find room to run during the game with Wheatland Friday, Oct. 9, 2020. Tongue River lost 20-38.

DAYTON — On paper, the Tongue River High School Eagles and Wheatland High School Bulldogs were not supposed to play close. And though the final score of Friday night’s game read 38-20, the Eagles performance didn’t reflect the statistical disparity facing the team before kickoff.

Tongue River (now 1-6 overall, 1-4 conference) welcomed Wheatland (now 6-1, 4-1 conference) to town for their homecoming game and corresponding senior night. The Bulldogs rode a two-game winning streak onto the Eagles’ field, averaging 41 points per game this season while limiting their opponents to 16 points per game.

The Eagles averaged 12 points a game and allowed an average of 20 points per game.

“We can compete with anyone,” senior fullback/linebacker Tony Perfetti said. “Little mistakes can change a game, but we can take anyone who we face who marches on this field or when we go to their field.”

The Eagles honored their four seniors — lineman Sam Patterson, running back/defensive back Greg Bold, running back/linebacker James McKenzie and Perfetti — prior to the coin toss and kickoff, and Perfetti sang the national anthem before another impressive performance on both offense and defense.

Perfetti finished with 50 yards through the first half and 113 yards total on eight carries. Bold added 69 total yards on 17 carries.

“It’s not just my performance,” Perfetti said. “It’s everyone. You can’t play football without all 11 guys doing their jobs. On those plays, all 11 guys were doing their jobs for me, for my run to be successful. I have to credit my line, tight ends, quarterback — all 11 men who were on that line, on that field at that moment. I credit them the most for those runs.”

Turnovers defined the first 24 minutes of the contest, as Wheatland’s two first-half scores came after interceptions. But Tongue River answered before halftime and almost added another score after an interception on their part.

But Wheatland answered that turnover by picking off Eagles’ junior quarterback Eli Cummins at his own 30-yard line. The Bulldogs drove to the 21-yard line, and Preuit evaded a sophomore linebacker Nate Guimond tackle to find junior wide receiver Jake Hicks on the right side for a one-yard catch-and-run.

Wheatland’s two-point conversion was good to give them an early 8-0 lead at 2:44 of the first quarter.

The almost-three minutes ticked away and the first quarter ended with the 8-0 score but, as a testament to the Eagles' offensive effort, Tongue River recorded 127 yards through 12 minutes of play.

Tongue River showed their athleticism halfway through the second quarter, as the offense found themselves at second-and-8 on the Bulldogs’ 41-yard line. Cummins tripped after the snap, but the junior play-caller still managed to throw the ball to Bold, who leapt to bring it down for an 8-yard gain.

However, on the ensuing play, Cummins was pressured again and threw his second interception of the night.

Wheatland started at the Eagles’ 38-yard line, and junior wide receiver Rodee Brow found the end zone with 5:22 left in the first half. The Bulldogs’ second two-point conversion attempt succeeded to double their lead to 16-0.

But the Eagles’ wouldn’t walk scoreless to their locker room, as the offense kept firing — Cummins kept, Bold churned his legs and van Tassel ran downhill to string together several first downs to the two-yard line. Cummins kept again to put his team on the board with 1:26 left in the first half.

Freshman defensive back Caleb Kilbride picked off Preuit with just under a minute left to play, but the Eagles had used up two timeouts on their previous drive and the half ended with the scoreboard showing 16-7.

The Eagles had racked up 231 yards through the first half, while the Bulldogs had only 118.

Again, the Eagles showed their toughness and will to work to start the second half. The Bulldogs started with the ball, but well-timed tackles and an overthrown Preuit ball led to fourth-and-long and an second-half opening punt.

Tongue River punted away, as well, unable to take advantage of their defensive stand, and Wheatland drove down the field in an effort to add to their score. A face-mask penalty helped the Bulldogs to the two-yard line and senior running back Adam Suko muscled his way into the end zone.

Perfetti stopped Wheatland’s third two-point conversion attempt to bring about a 22-7 score at 5:43 of the third quarter.

The Eagles couldn’t answer during their next drive and were forced to punt, but on the kick-return, Bold tackled junior wide receiver Rodee Brow and the football popped loose. Perfetti fell on it to give the Eagles a short field with 4:11 left to play in the third quarter.

A minute later, Perfetti carried the ball into the end zone on the left side for a 32-yard touchdown — bleachers rattled as fans jumped, and the sidelined players and coaches ran with Perfetti. The extra point cut into the Bulldogs’ lead, making it 22-14.

After Wheatland punted, unable to answer Tongue River’s score, Perfetti found space on the left side of the field for a 27-yard run. Cummins found Kilbride for a nine-yard touchdown pass that brought the Eagles within two, though their two-point conversion fell short to make it 22-20 with 11:13 left to play in the fourth quarter.

The dagger of a Wheatland touchdown came two minutes later when Preuit hit Hicks and Tongue River’s secondary missed him running up the left side to the end zone to make it 30-20. Three-and-a-half minutes later, Suko picked up his second touchdown of the night to push the Bulldogs’ lead to 38-20.

Cummins finished eight-of-19 for 77 yards through the air, and van Tassel ended up leading the Eagles with 119 yards rushing, 100 of which came in the first half.

Preuit completed seven of his 10 passes, and Suko led Wheatland with 90 yards rushing on 18 carries.

Tongue River head coach Steve Hanson declined to comment after the game. The Eagles travel cross-county to Big Horn next Friday for the teams’ annual rivalry game. Kick-off is at 6 p.m.