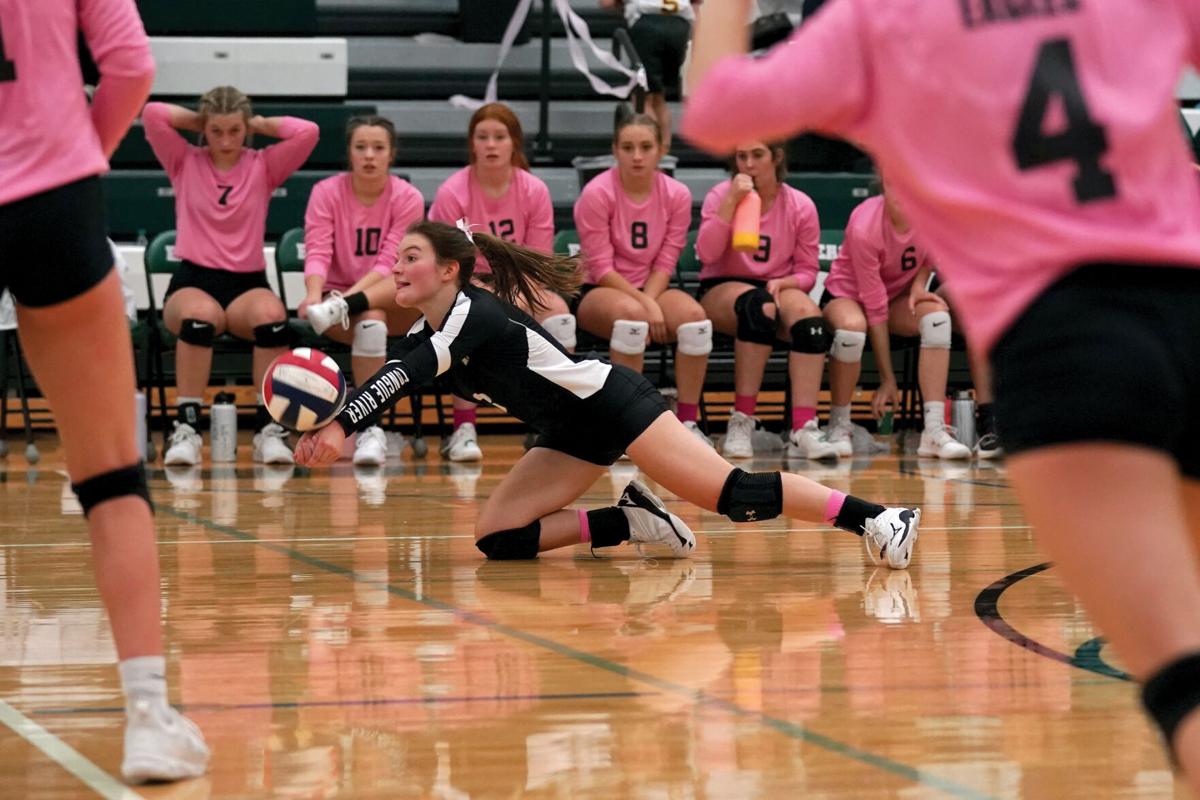 Tongue River's libero Katy Kalasinsky (3) comes with a big save during the third set of the match against Big Horn Saturday, Oct. 9, 2021. The Lady Eagles swept the Lady Rams in three straight sets. 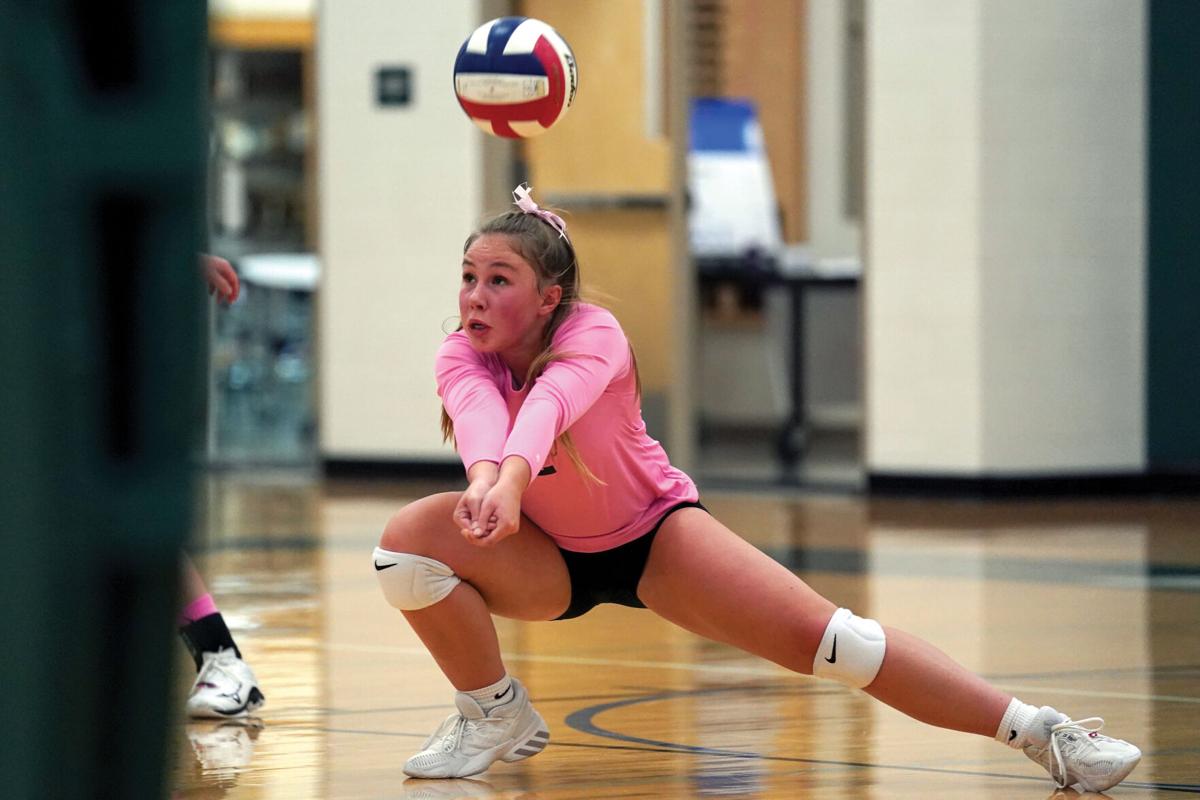 Tongue River's Maya Fritz (2) bumps the ball over the net after laser of a spike by Big Horn's Saydee Zimmer Saturday, Oct. 9, 2021. 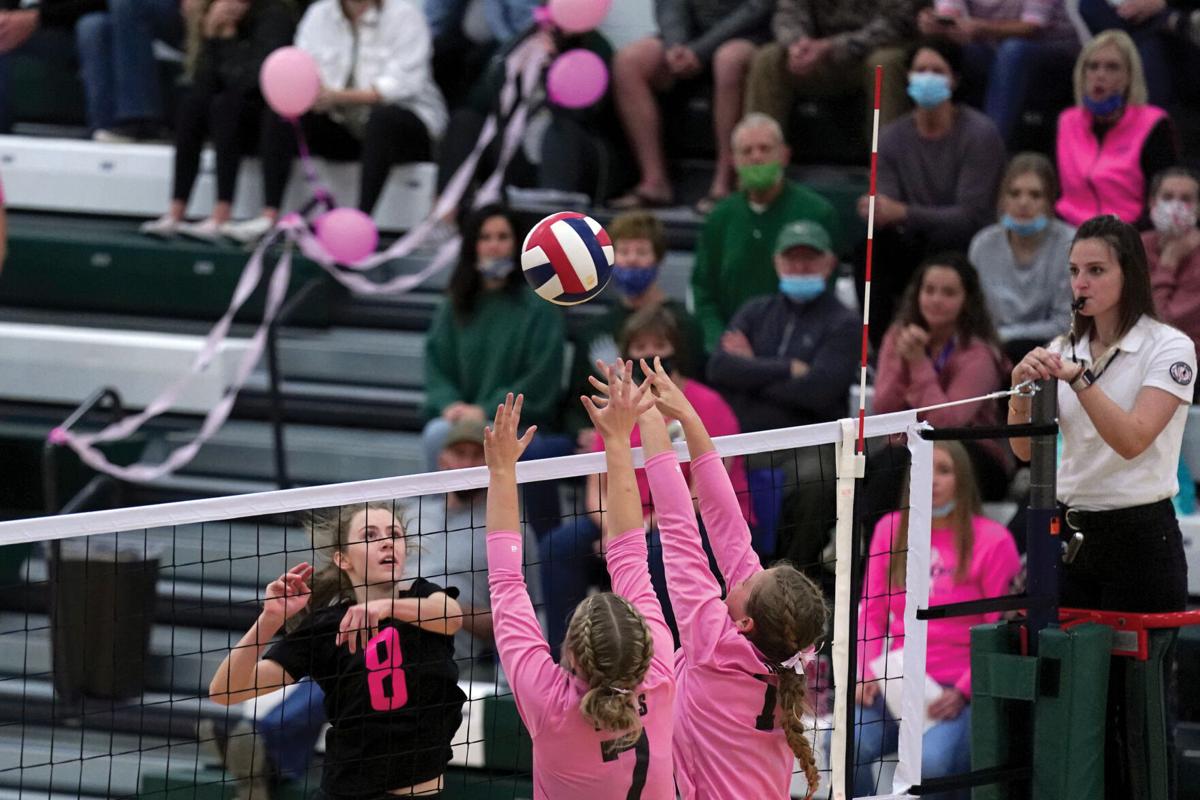 Tongue River's libero Katy Kalasinsky (3) comes with a big save during the third set of the match against Big Horn Saturday, Oct. 9, 2021. The Lady Eagles swept the Lady Rams in three straight sets.

Tongue River's Maya Fritz (2) bumps the ball over the net after laser of a spike by Big Horn's Saydee Zimmer Saturday, Oct. 9, 2021.

Yeah, she felt some nerves while playing the Big Horn Lady Rams Saturday. With an almost still-nervous laugh, she admitted they were there. But she didn’t let them affect her play.

“It’s always a little nerve-wracking playing against our rivals,” Reish said. “But, I think, honestly, we just really worked on our teamwork and worked together. Once we play as a whole team instead of individually, it really all comes together.”

On top of the normal rivalry-match jitters, Tongue River was trying to halt a trend. The Lady Eagles had lost four straight matches to Big Horn dating back to the middle of last season. They had dropped both matches between the two teams this year.

“We just completely tightened up and hoped that they would make the mistakes instead of going and winning a game,” Nikont said. “We were just too tight, and when you’re tight, you can’t play a good game of volleyball. Your passing is impacted when your upper body is tight. Your feet don’t move. We have to learn how to control those nerves a little more. Nerves are going to happen. They’re natural. We just have to learn how to use those in a big game like this.”

Tongue River started quickly in the first set. Reish scored the first point of the game, and the Lady Eagles jumped to a 4-0 lead. After a Big Horn timeout with the Lady Eagles up 12-8, the Lady Rams exploded with seven straight points to claim a 15-12 advantage. Tongue River recorded the last six points of the set to eke out a 25-23 set victory.

Big Horn struck for the first four points of the second set and led most of the way until the Lady Rams knotted the score at 17. Tongue River stole its first lead of the set at 20-19 and didn’t trail again, winning 25-23. Reish spiked the final point.

“We rely on her a whole lot, both from an athletic standpoint and a leadership standpoint,” Tongue River head coach Janelle Manore said. “She came through.”

The third set flipped back and forth until a 10-10 tie and a Big Horn timeout. The Lady Eagles then took the lead and cruised to their easiest set victory of the day, 25-19.

“It was a whole team effort,” Manore said. “We had 14 girls suited up, and 14 girls helped us win that game. Whether it’s in practice or on the court on game day, it takes everybody every day.”

The match also served as the annual United for a Cause day, in which the two teams raise money to be donated to Sheridan Memorial Hospital.

And after canning the event last year due to COVID-19, the teams collected more than $2,100 this year.

“There is a huge rivalry between the schools from academics to athletics,” Manore said. “But it is really cool when you can come together and do something good for a community that supports us. It’s always nice when we can give back like this.”

Both teams play Friday. Tongue River hosts Sundance at 1 p.m. while Big Horn heads to Wright for a 2:30 p.m. contest.